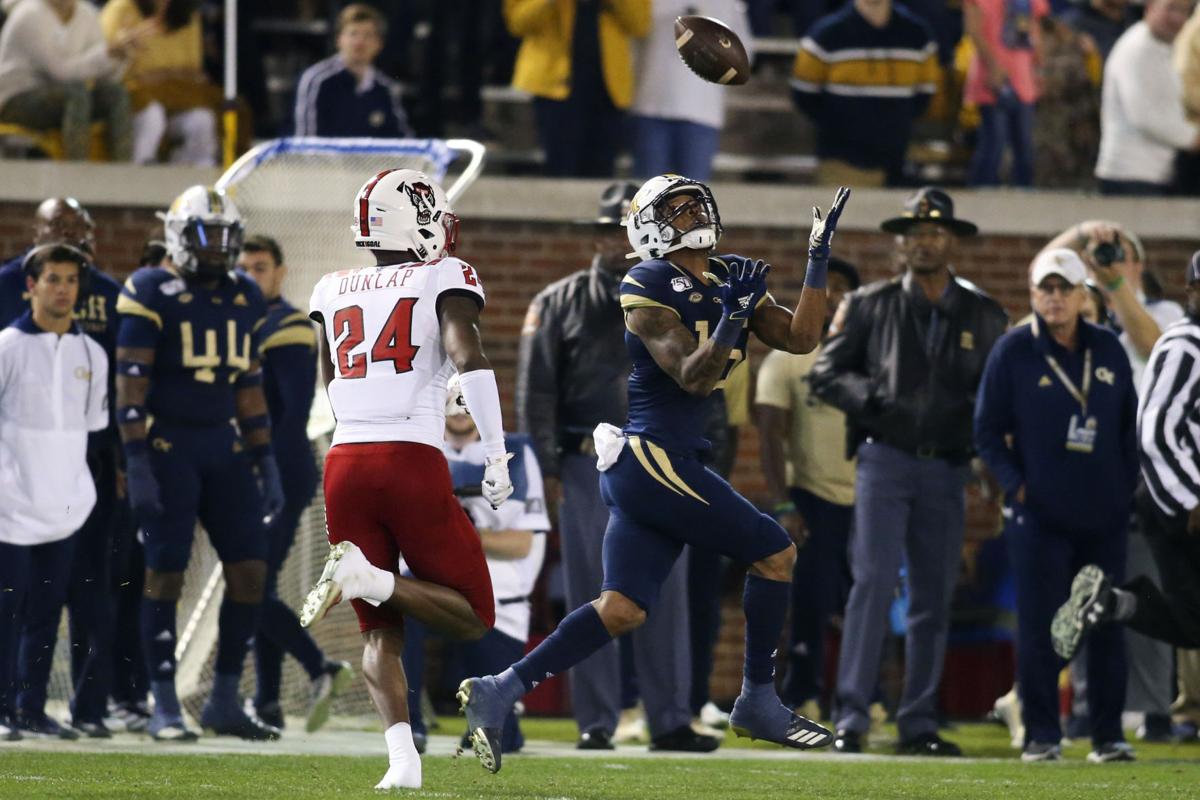 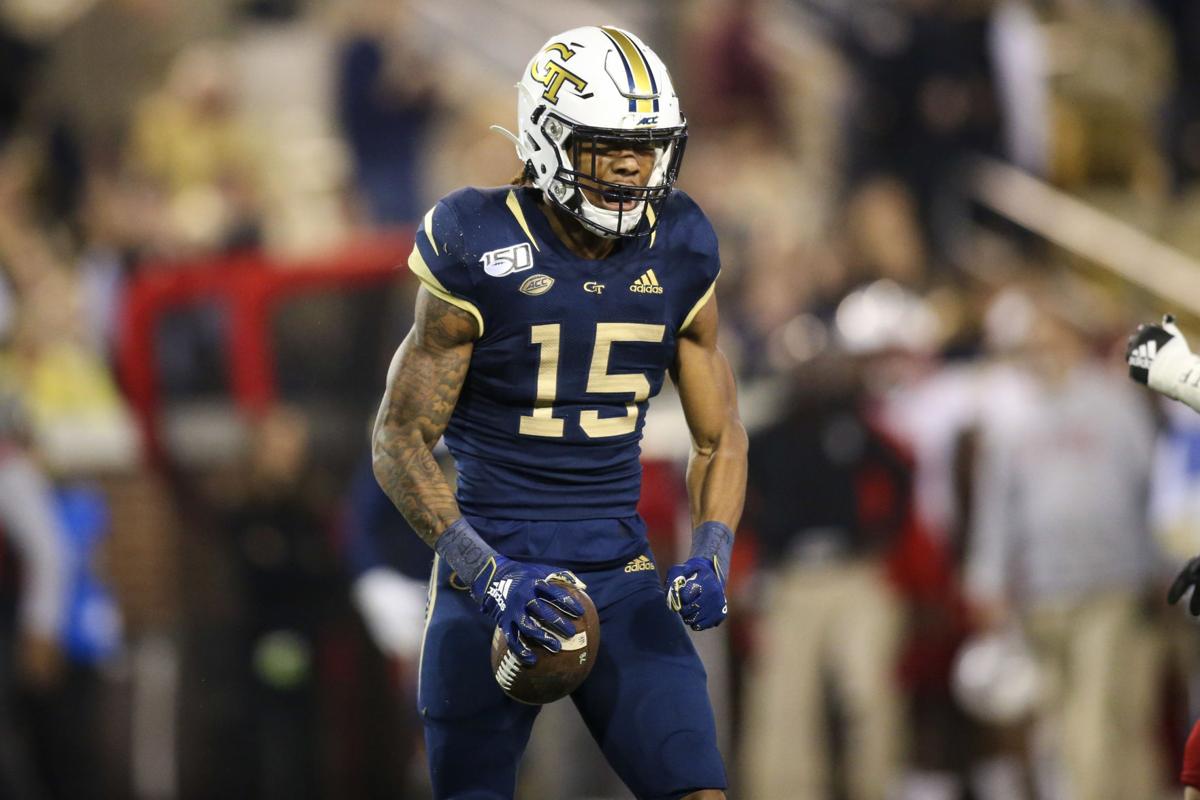 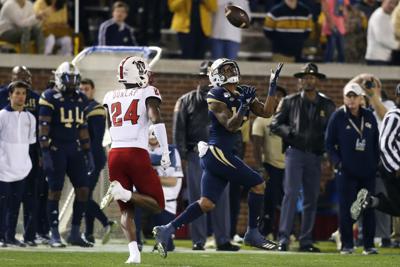 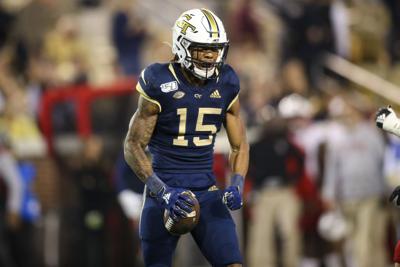 ATLANTA — It took only one snap of Georgia Tech’s game with N.C. State on Thursday night for Malachi Carter to have a breakout game.

The Mountain View broke free from the Wolfpack cornerback covering him, and quarterback James Graham hit him in stride with a perfect strike for a 54-yard completion on the first play of what would become a 28-26 Tech victory before 38,198 fans at Bobby Dodd Stadium that set the Yellow Jackets (3-8, 2-6 in the ACC) up in the red zone.

The completion not only set up Graham’s 17-yard TD pass to Ahmarean Brown that gave Tech a 7-0 lead just 1:16 into the game, it gave Carter a pair of milestones.

First, it was the longest completion in the 6-foot-3, 195-pound sophomore’s career. In addition, it nearly doubled the most yards Carter had ever had in a single college game.

He wound up with 75 yards on the two catches.

His previous high was 45 yards, which came on three catches in Tech’s loss to North Carolina on Oct. 5 at Bobby Dodd Stadium, and it is another step in his development that has seen him get more targets and more production with each week.

“It’s just hard work,” said Carter, whose 15 receptions on the season ranks third on the team and who’s 217 yards ranks second. “Just going out to practice and not worrying about the touches I have the week before or the week before that. Just knowing that the harder I work, the more opportunities will come to me. And I know my boy James is going to put me in the right place and set me up to play the way I know I can.”

Tech head coach Geoff Collins has also taken notice of the upturn on Carter’s game of late, and wasn’t surprised how it translated into his early success Thursday night.

“He’s gotten better every single week,” Collins said. “You look back and there was a three-week span (earlier this season) where I thought Malachi was playing really good football, but the stat sheet didn’t show it because he didn’t get a lot of targets based on what teams were doing coverage-wise.

“But then once he gets the shot, he’s able to make some plays, and he’s a dynamic receiver. I said that even in the spring. I think our receiving corps under the direction of Kerry Dixon, has a chance to be really, really good, and you see that every single week, they’re getting better and better. … I’m really proud of Malachi. He’s developing into a really good receiver.”

Brown was the second Tech receiver with a milestone on the evening, and in reaching it, he also joined some heady company.

With the first-quarter touchdown catch, plus an 11-yard TD snag with 32 seconds left in the first half, the 5-10, 155-pounder wrote his name into the program’s history books with his sixth and seven scoring catches of the season.

That matches the seven that tied College Football Hall of Famer and former NFL star Calvin Johnson’s school-record for TD receptions by a freshman, which he set during his rookie season of 2004.

With only two wins prior to Thursday night’s game, Tech had not had much experience of playing with a lead this season.

But Graham’s 13-yard touchdown pass to Tobias Oliver with 13:48 left in the first half gave the Jackets a 14-0 lead, their largest lead thus far in the 2019 campaign.

For perspective, their largest lead prior to that this season came when Oliver’s 7-yard TD run with 53 seconds left in the first half gave the Jackets a 14-3 lead heading into halftime of what would become a 14-10 win over South Florida on Sept. 7 at Bobby Dodd Stadium.

It was also their largest lead since taking a 27-14 lead into the fourth quarter of what would become a 27-21 win over Miami last Nov. 10, also at Bobby Dodd Stadium.

The lead eventually became as large as 28-10 following Graham's 26-yard TD run with 5:08 left in the third quarter.

Those big leads came in hand, as the Jackets had to hold on for the win after N.C. State scored the game's final 16 points over the last 16:15 of game time.

Jordan Mason’s game-high 141 yards on 22 carries marked the third 100-yard game of his career, all of which have come within the last six games. …

With Graham also passing passing the 100-yard mark after running for 112 yards on 14 carries and a TD, it gave the Jackets two runners surpassing the century mark in a game for the first time since Taquan Marshall and Oliver did it last year against Louisville on Oct. 5. …

Two more former Gwinnett players had a major impact for the Tech defense, with Buford grad David Curry posted a game-high 11 combined tackles and assists, including a tackle for loss and pass break-up, and Dacula native T.K. Chimedza finishing with six tackles.

ATLANTA — Last week, James Graham had the worst game of his career as Georgia Tech’s startin…