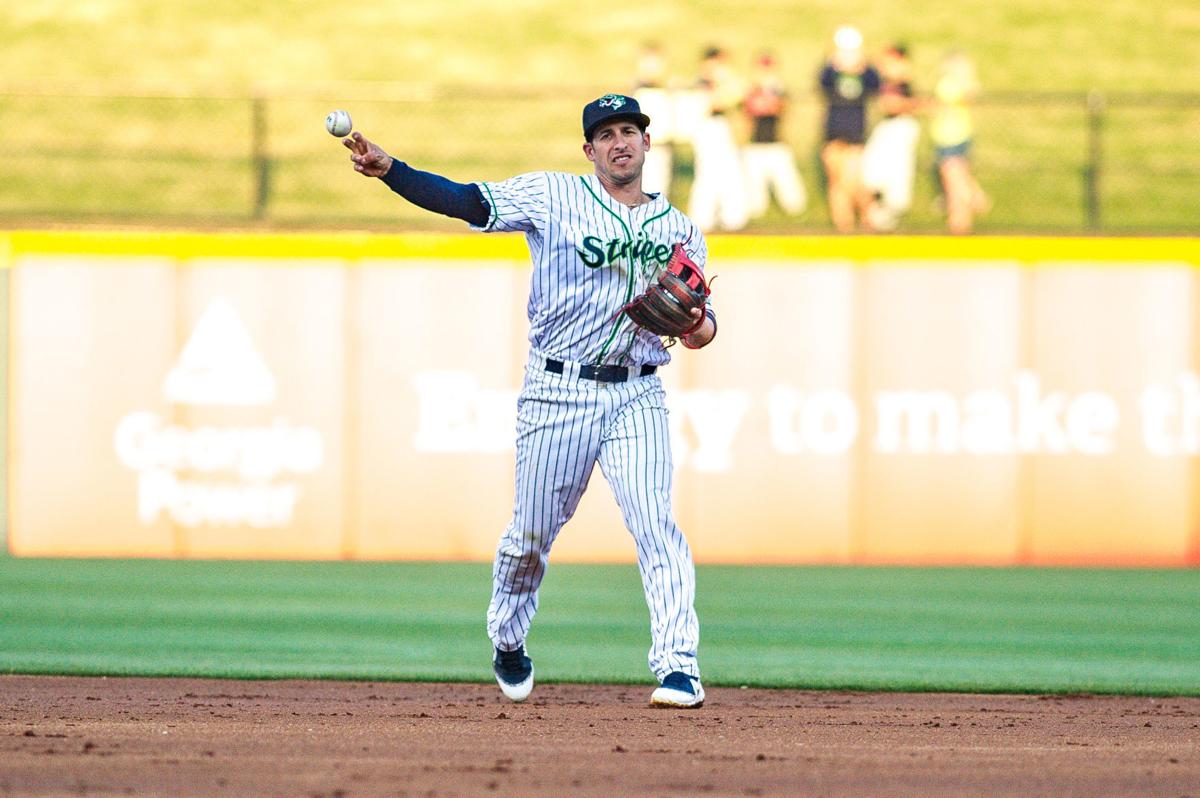 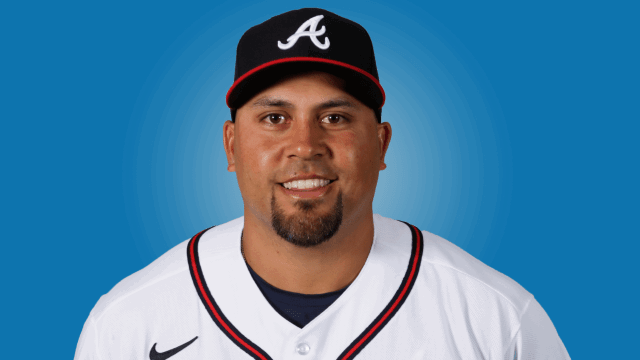 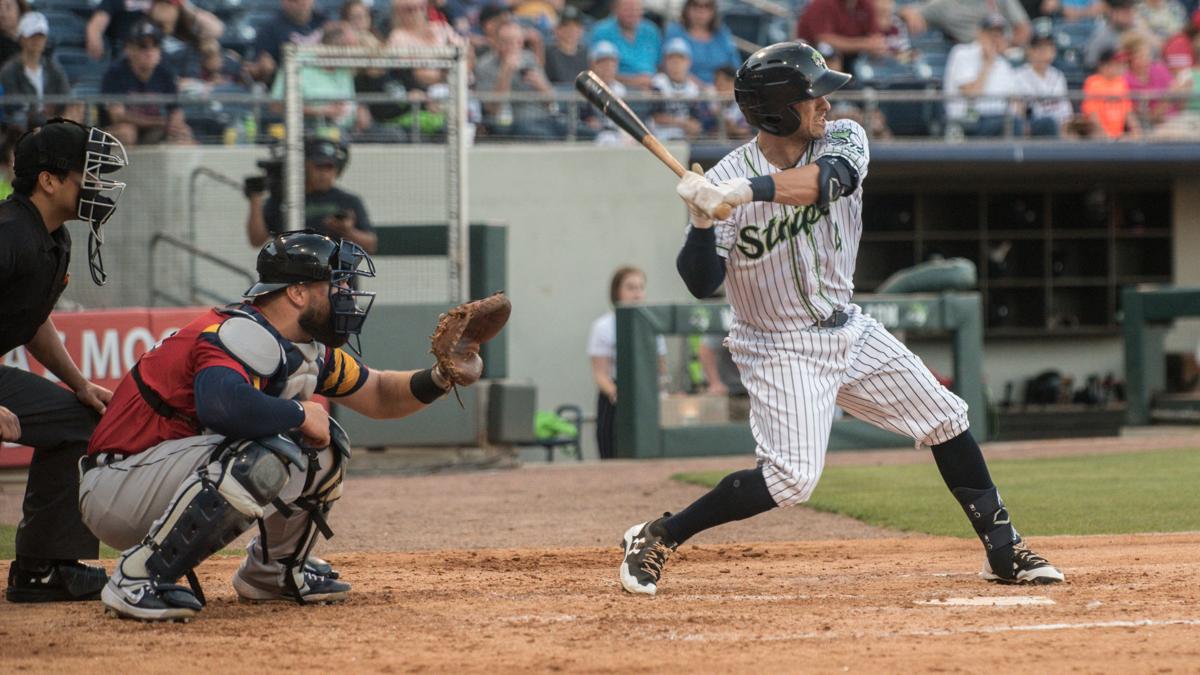 Sean Kazmar at the plate during a 2019 Gwinnett Stripers game. 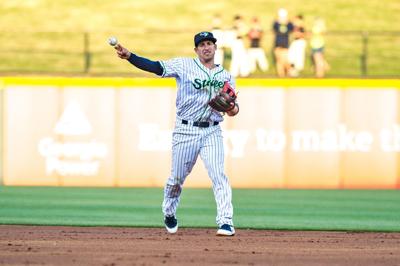 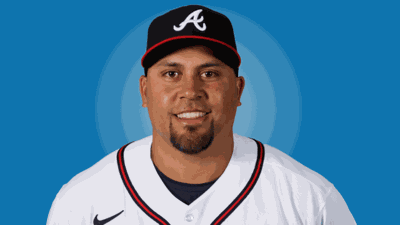 Sean Kazmar at the plate during a 2019 Gwinnett Stripers game.

Every new baseball season brings a sense of renewal and plenty of new challenges to every team.

It’s an adage that seems particularly apt when it comes to the minor leagues.

But as the Gwinnett Stripers prepare to open their 2021 season Tuesday at Charlotte, the feeling of renewal for not only the Stripers, but every team in Triple-A and every level of the minor leagues has never seemed so stark.

If the resumption for every team after missing the entire 2020 season due to the COVID-19 pandemic weren’t enough, the entire minor league system has undergone a complete overall since the end of the 2019 season.

What that means is that the 2021 campaign will be like nothing anybody involved with a minor league team — from players to coaches to team employees to fans — has every seen before.

And that may not necessarily be a bad thing, even for someone like Stripers infielder Sean Kazmar Jr., a 15-year minor league veteran.

“I think I was just as excited as anyone else to try to get this (season) going,” said Kazmar, who put together one of the best seasons of his career, hitting .270 with 12 home runs and 61 RBIs in helping the Stripers to the 2019 International League South Division championship when the team last took the field. “Hopefully, everything runs smoothly. I tell you what, we’re pretty excited here in Gwinnett to get the season started.

“Not being able to play (last year), I think that alone makes this whole season, once we get started, (something to) look forward to even more. Just over the last few days, guys are just itching for the season to begin. We’re ready to face other pitchers and get going.”

Still, there are a lot of changes that everyone will have to get used to.

From a logistical standpoint, Stripers fans will note that the old Triple-A model of the International League and Pacific Coast League is gone.

Instead, Minor League Baseball’s highest level has been reorganized into Triple-A East and Triple-A West.

The Stripers will be part of the former, and while their newly christened Southeast Division will look a lot like the old IL South — with previous foes in the Charlotte Knights, Durham Bulls and Norfolk Tides still around — there will also be a few new opponents that will come to Coolray Field throughout the season.

The Memphis Redbirds and Nashville Sounds come over from the old Pacific Coast League, while the Jacksonville Jumbo Shrimp move up from Double-A as the new affiliate of the Miami Marlins.

And with COVID protocols still in place even as the pandemic begins to lessen thanks to vaccinations and other factors, the Triple-A schedule is taking on a dramatically different look for 2021.

Instead of the usual three- or four-game series, teams will generally play each other five or six days in a row in the same city over the course of a week before moving on, while every team in the league taking Mondays off.

And if that isn’t enough change, the Stripers specifically will be facing plenty of changes in the clubhouse, with a number of new faces on the roster, plus a mostly new coaching staff, led by Matt Tuiasosopo.

“It’s been a crazy year and a half, two years, I guess,” said Tuiasosopo, who played parts of two seasons with the club when it was known as the Gwinnett Braves from 2016-17. “For us just trying to get used to the protocols, even going through it last summer at the (alternate) site here in Gwinnett and then going back to this spring, there are more things … and we thought we might be able to get more back to normal a little sooner. But we still have got pretty strict protocols now.

“The guys are doing a great job. Really, it’s just getting ready for … games at this level and trying to get yourself ready to compete at a high level. A lot of the new protocols keeps guys from trying to do a lot of their routines they’ve done for 10-plus years. It’s so challenging, but they’ve done a great job keeping a great attitude, staying positive, going with the flow. We’ve gotten a lot of good work in. It’s been a challenging time, but I feel like guys are getting better. They’re working on their craft each day and trying to do everything we can this new routine as good as it can be to help these guys get back up to Atlanta and help them win big league games.”

Of course, Tuiasosopo and his staff still won’t know the exact makeup of the Stripers’ roster until shortly before Tuesday’s opener in Charlotte, though he does have at least a good idea, with most of the roster slots likely to be filled by players currently at the Atlanta Braves’ alternate site at Coolray Field.

While some of those names and faces might be somewhat familiar, the clubhouse does figure to have a much more experienced flavor to it this season.

“There are definitely challenges, but this group we’re working with here at the alt site is a lot different than it was last year (when) we had a lot of young guys,” said Tuiasosopo, who made his managerial debut with the Class A Rome Braves in 2019, and won the Bobby Cox Award for the organization’s top manager. “We had a lot of (Atlanta’s) young prospects. This year, we have a lot more veteran guys. We even kept (Braves outfield prospect Drew) Waters down in Florida (after spring training) just so he could keep more of a game schedule. He’s played (against) some other teams down there, while we’ve just kind of been intrasquading for four or five innings a day.

“I think they should be ending (extended spring training) camp down there pretty soon in Bradenton (Fla). So I’d imagine anytime soon now, that will all be established. The majority of this group that’s here will be here for the (start of the) season. So we’ve got a good group here, a great (coaching) staff, and we’re (chomping) at the bit to get after it and play some other teams in different jerseys.”

Kazmar is one of those players who figures to be on the Stripers’ opening day roster, and even before the season starts, 2021 has already been an eventful campaign.

The 36-year-old infielder spent a week up with the Major League club in Atlanta, seeing action in two games in only his second stint in the majors in his professional career.

But as much as he enjoyed it, he is equally as excited to simply be back playing the game he loves again after missing an entire season.

“Yeah, that was awesome,” said Kazmar, who played 19 games with the San Diego Padres in 2008 before getting his recent call-up to the Braves from April 17-24. “Obviously, it’s a far cry from where I was a year ago. I was very fortunate enough to get another opportunity to come into spring training (this year) and compete. Fortunately, it went well, and I think that helped make the decision to get me up there a little easier.

“Just kind of looking back at it, I’ve literally played baseball since I was 4 years old year-round. So that year off was certainly tough. On the positive note, I was able to get a ton of family time in with my two boys and my wife. So that certainly helped.”

Another thing that Kazmar, Tuiasosopo and all of the Stripers will be eagerly looking forward to is playing in front of fans again.

When the team returns from Charlotte for its 2021 home-opening series against the Louisville Bats from May 11-16, Coolray Field will be opened up to 50 percent of its capacity of 10,427.

That capacity could be increased at some point as the season progresses, but just the thought of any fans gives Tuiasosopo a growing and comforting sense of normalcy.

“We had a little event the other day in which season ticket holders came out and watched us work out,” Tuiasosopo said. “What a big difference it is to have people there supporting us and hearing them cheer and smelling the concession (stand food). Every little detail, as players we know … everything’s back in motion again.”

Prophetic investor from 'The Big Short' is betting against Tesla

Surfer dies after being bitten by shark in Australia