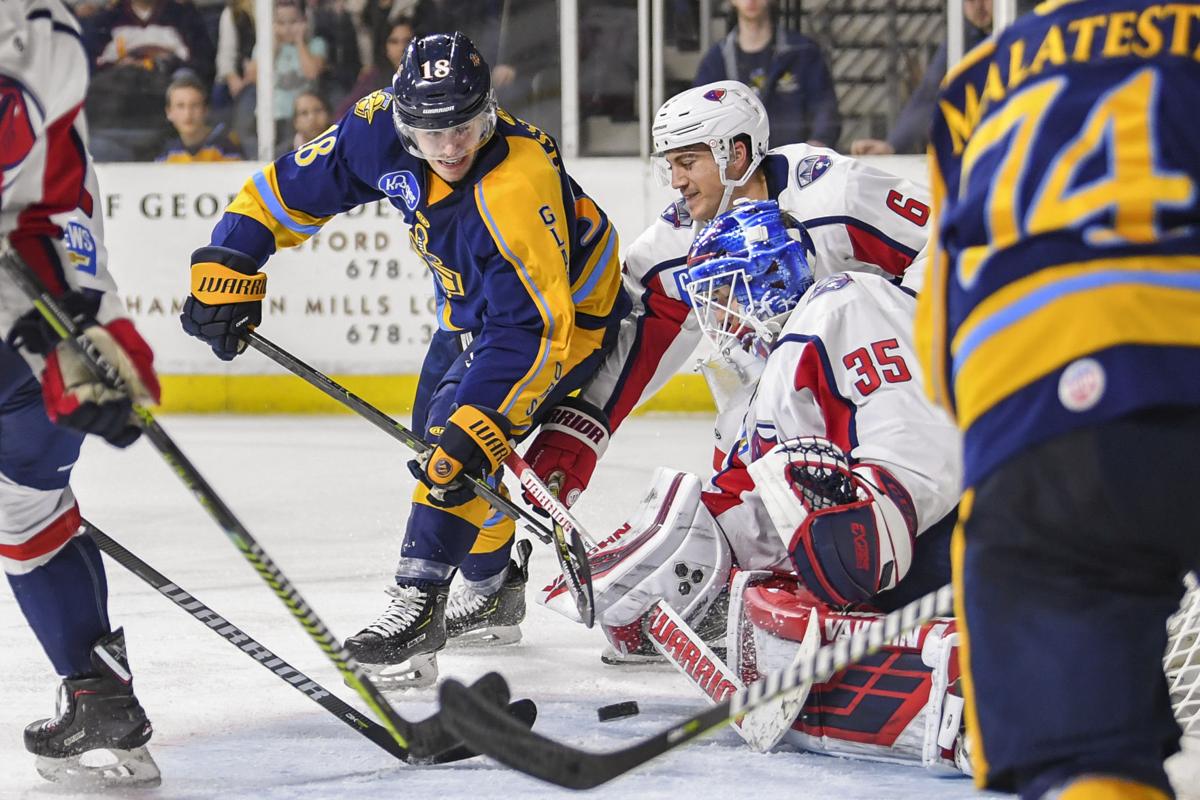 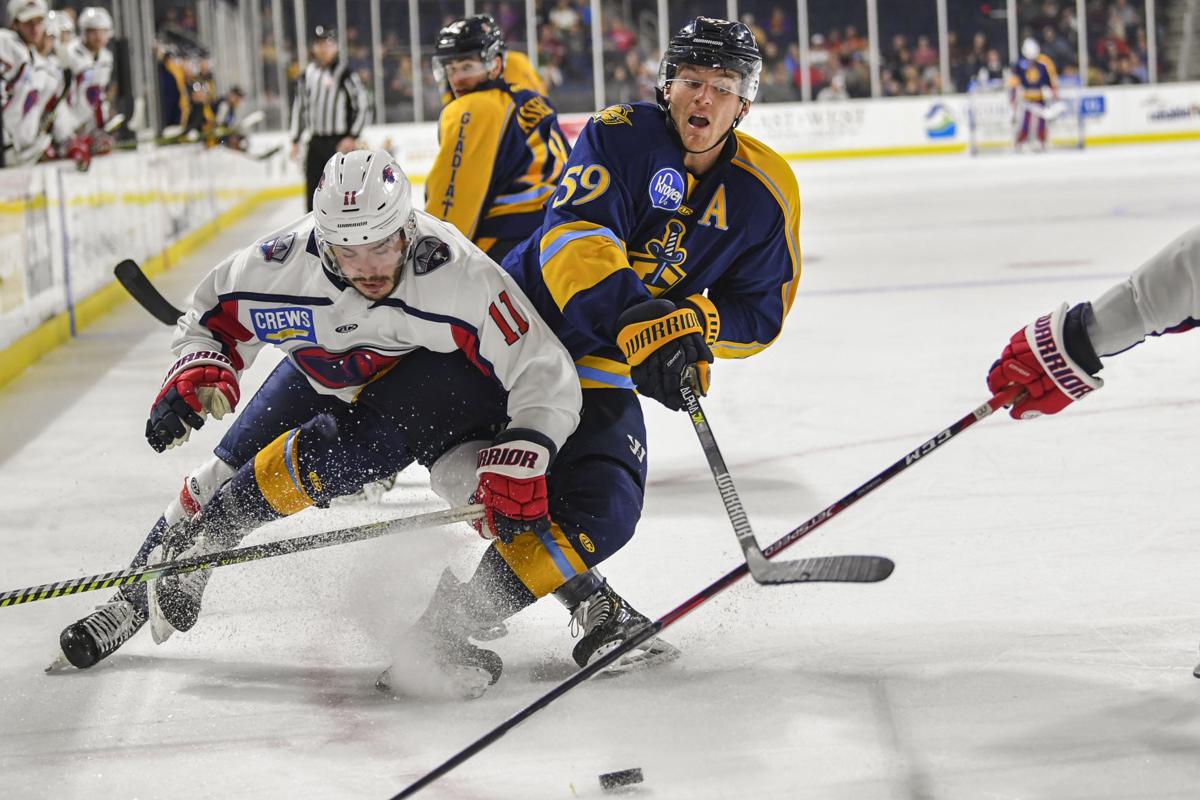 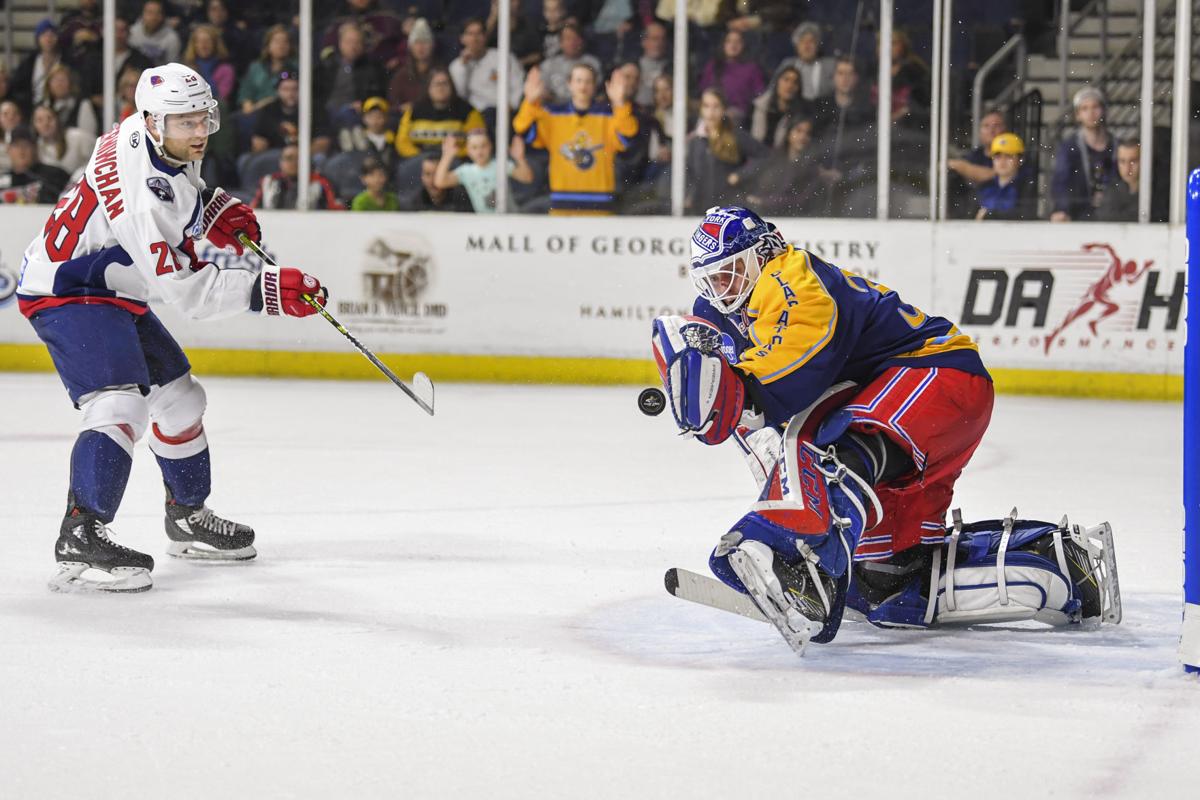 Atlanta Gladiators goalie Chris Nell (35) makes a save against South Carolina Stingrays forward Andrew Chemiwchan (28) during the shootout during the game Friday night at Infinite Energy Center in Duluth. 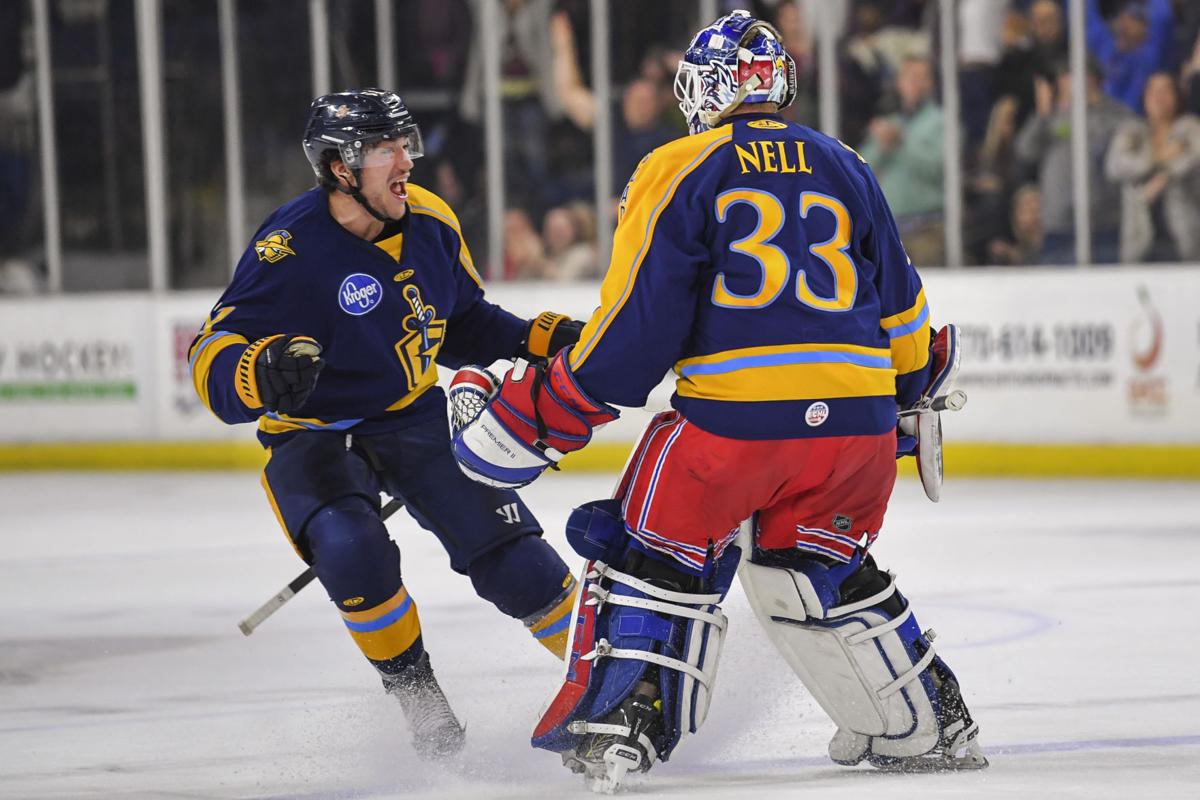 Atlanta Gladiators goalie Chris Nell (35) reacts with defenseman Joel Messner (51) after the Gladiators defeated the South Carolina Stingrays in a shootout during the game Friday night at Infinite Energy Center in Duluth. 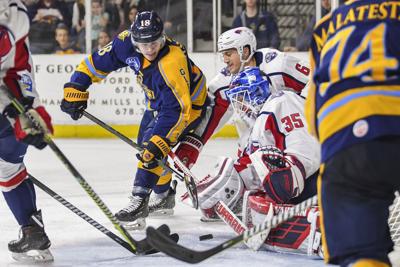 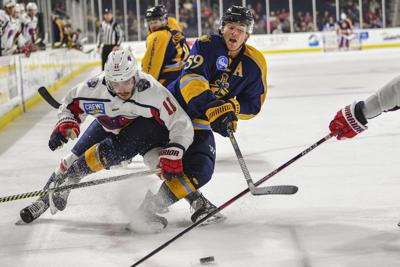 Atlanta Gladiators goalie Chris Nell (35) makes a save against South Carolina Stingrays forward Andrew Chemiwchan (28) during the shootout during the game Friday night at Infinite Energy Center in Duluth.

Atlanta Gladiators goalie Chris Nell (35) reacts with defenseman Joel Messner (51) after the Gladiators defeated the South Carolina Stingrays in a shootout during the game Friday night at Infinite Energy Center in Duluth.

DULUTH — Trailing a team that has lost but five times in 26 games this season is not a position any team wants to be in, especially after having struggled the way the Atlanta Gladiators have been of late.

But facing a two-goal deficit to the ECHL South Division-leading South Carolina Stingrays, the Gladiators dug down deep in the final frame of regulation to force overtime.

And Sammy Asselin, who had sparked a two-goal, third-period rally with his team-best 11th goal of the season, had a fortunate slip of the puck off his stick in that shootout to deliver the game-winning goal in a 4-3 victory to end Atlanta’s five-game losing streak before a post-Christmas crowd of 4,655 Thursday at Infinite Energy Arena.

Eric Neiley netted the game-tying goal on the power play with less than six minutes remaining in regulation, while Chris Nell, acquired in trade with the Florida Everblades very early Thursday morning, stopped 30 of 33 shots to help hand South Carolina just its sixth overall loss of the season.

With the Gladiators reeling after having been outscored 28-8 during the losing streak and facing a rash of injuries that necessitated the trade for Nell for future considerations and the signing of forward John Gustafsson in the wee hours of Thursday morning, the win was just the shot in the arm they needed coming out of Christmas break.

“We had injuries. I had a couple of other players (come in),” Gladiators coach Jeff Pyle said. “We’ve got two (goaltenders) injured, … and I got lucky a little bit and brought in Chris Nell, who’s been really good. (Thursday) night, he was great. We needed that. We needed some big saves.

“Samny’s goal really energized us. He took it to the net. Neiley the same thing. We were really short. We have two (defensemen) playing forward right now. Gus (Gustafsson) drove all the way 10 hours from Norfolk (Virginia), got here (Thursday) at 4 (p.m.) and played for us. With a 3-1 lead, my money’s on (South Carolina) going into the third. But we found a way.”

Asselin was the first to find a way 7:09 into third period when he took a pass from Zach Malatesta behind the South Carolina net, skated to his right, pivoted back to his left, regained the puck after he lost control of it and went back to the right and beat Stingrays goaltender Parker Milner with a back-hander off a wraparound to pull Atlanta to within 3-2.

Neiley demonstrated how that philosophy worked after the Gladiators went on a power play after Dylan Steman got the gate for slashing with less than seven minutes left in regulation, by getting to a puck dumped in behind the net by Nick Bligh and muscling his way to the front of the net.

Milner made the first stop, but Neiley kept battling and banged home his own rebound with just 5:29 left in regulation to tie the game at 3-all, and eventually send the game into overtime. Joel Messner was also credited with an assist.

The game remained tied through the seven-minute extra frame despite Atlanta outshooting South Carolina 6-2 before the Gladiators got a bit of a break during the second round of the shootout.

Skating down the middle, Asselin tried to make a move to his left, only to have the puck slide off his stick. But the miscue apparently got Milner off-balance, and the puck slid through the five hole for a goal.

“I just fumbled the puck, to be honest,” Asselin admitted. “I wanted to go back in, but I hit a little snow and the puck just fumbled a little. But I’ll take those every day.”

And Nell made sure it was the only goal of the shootout by stopping Dan DeSalvo, Andrew Cheriwchan and Cole Ully to close out the victory, and the Gladiators hope, change their fortunes, as they host the Stingrays once again at 6:30 Friday night.

“I told the guys (that) if we play defense and we’re smart, last year’s team did the same thing,” Pyle said. “You start playing defensive, smart hockey, you’re going to win in this league. So that’s a start right there. And (Friday) would be another huge one to get.”

Bligh got the Gladiators off to a good start Thursday by redirecting Derek Nesbitt’s snapshot from the left point past Milner, with Logan Nelson also getting an assist for a 1-0 lead at the 6:19 mark of the first period.

But it didn’t take long — 15 seconds, to be exact — for South Carolina get its offense going in the second period.

Cherniwchan elevated a shot over Nell’s right shoulder and tucked it under the crossbar for his team-best 13th goal of the season to tie the game at 1-1.

Just under four minutes later, the Stingrays were back on the attack with Cameron Askew crashing the next to poke home a loose puck after Nell had made the initial stop on Tim Harrison.

Game officials reviewed the video, but ruled there wasn’t enough evidence for a goaltender interference call, and Askew’s fourth goal of the season stood to give South Carolina a 2-1 lead.

Nell and the Gladiators then fell victim to a bad bounce when Matthew Weis sent what appeared to be an innocuous shot towards the front of the crease as the final seconds of the middle frame ticked down.

The puck bounced off a Gladiators defenseman and slid past Nell with 18.2 seconds left, sending the Gladiators into the second intermission with a 3-1 deficit.

The Good Stuff: Aquarium puppies, a Zoom wedding and a flower photo swap

Refreshing NCAA eligibility to spring athletes could be complicated, costly