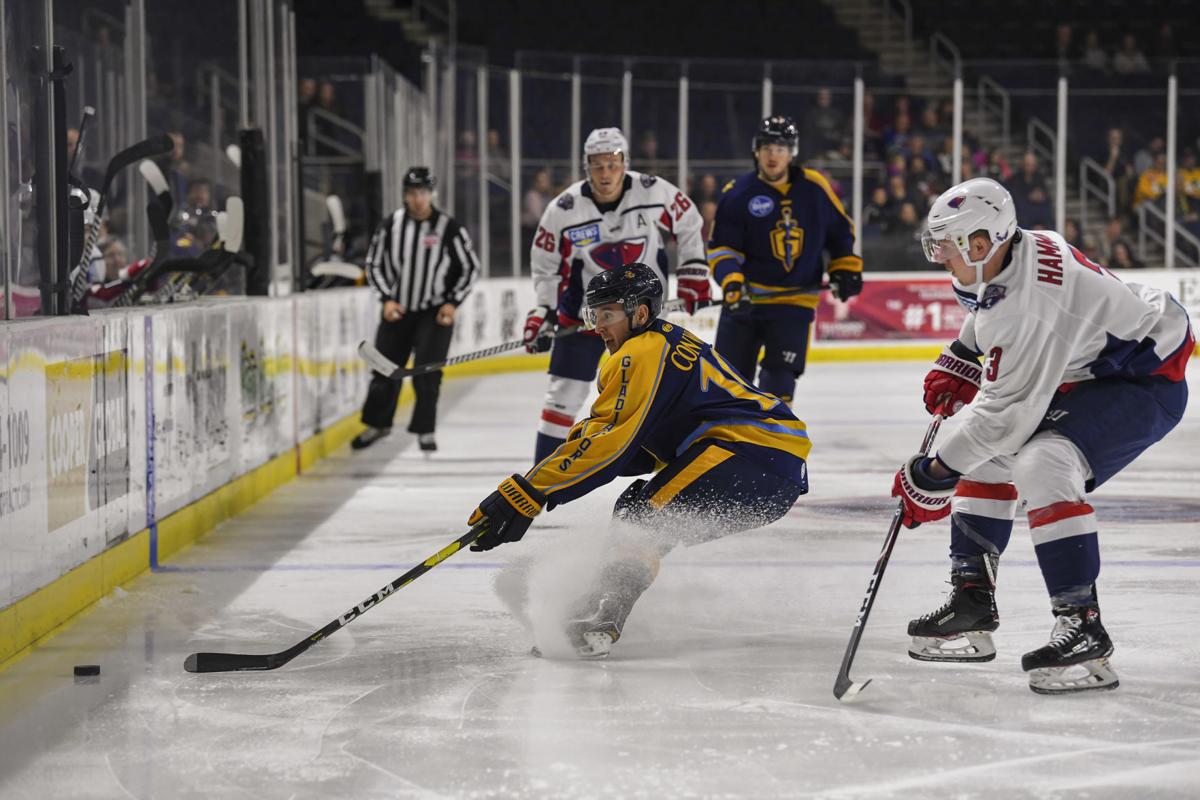 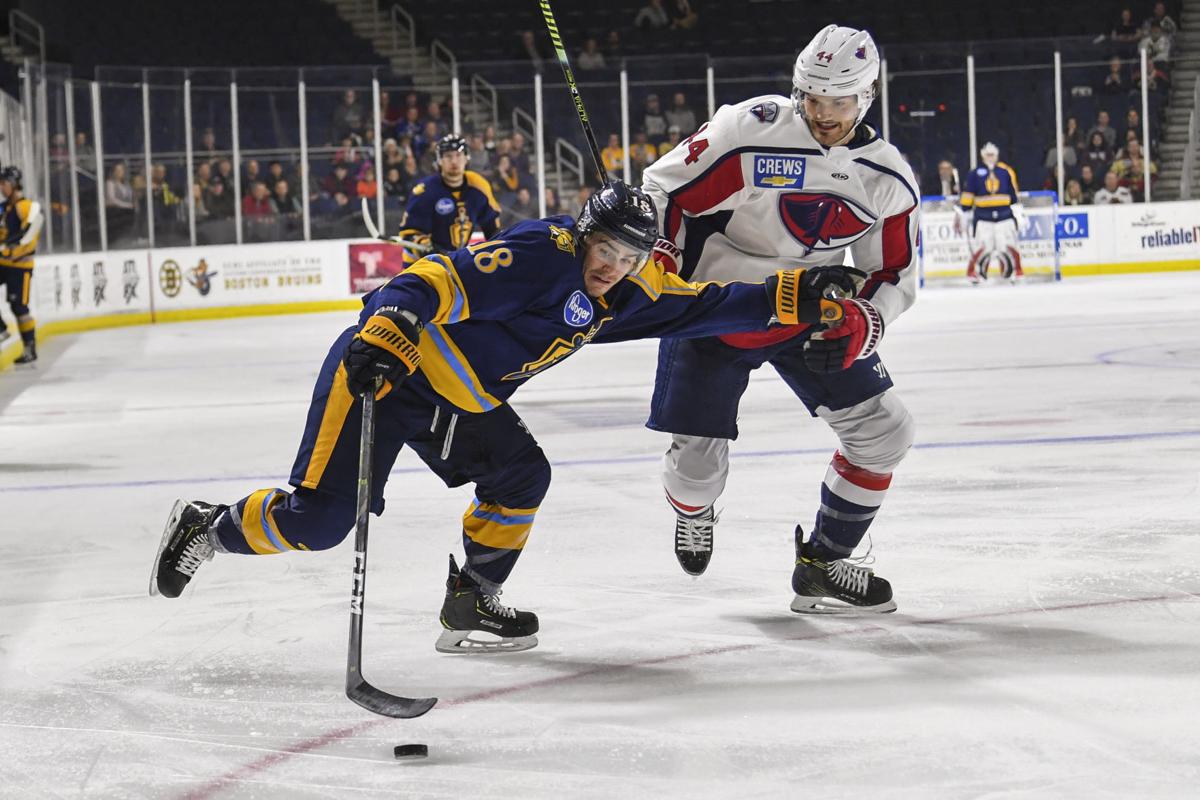 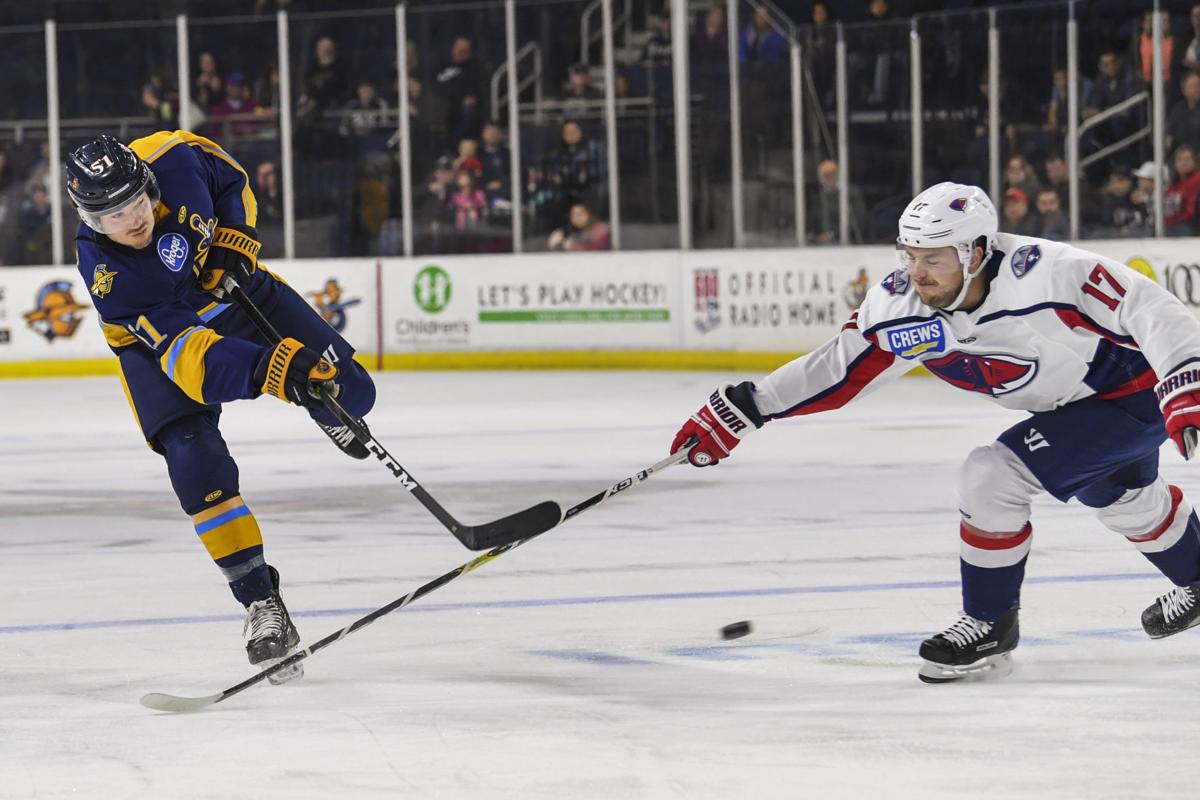 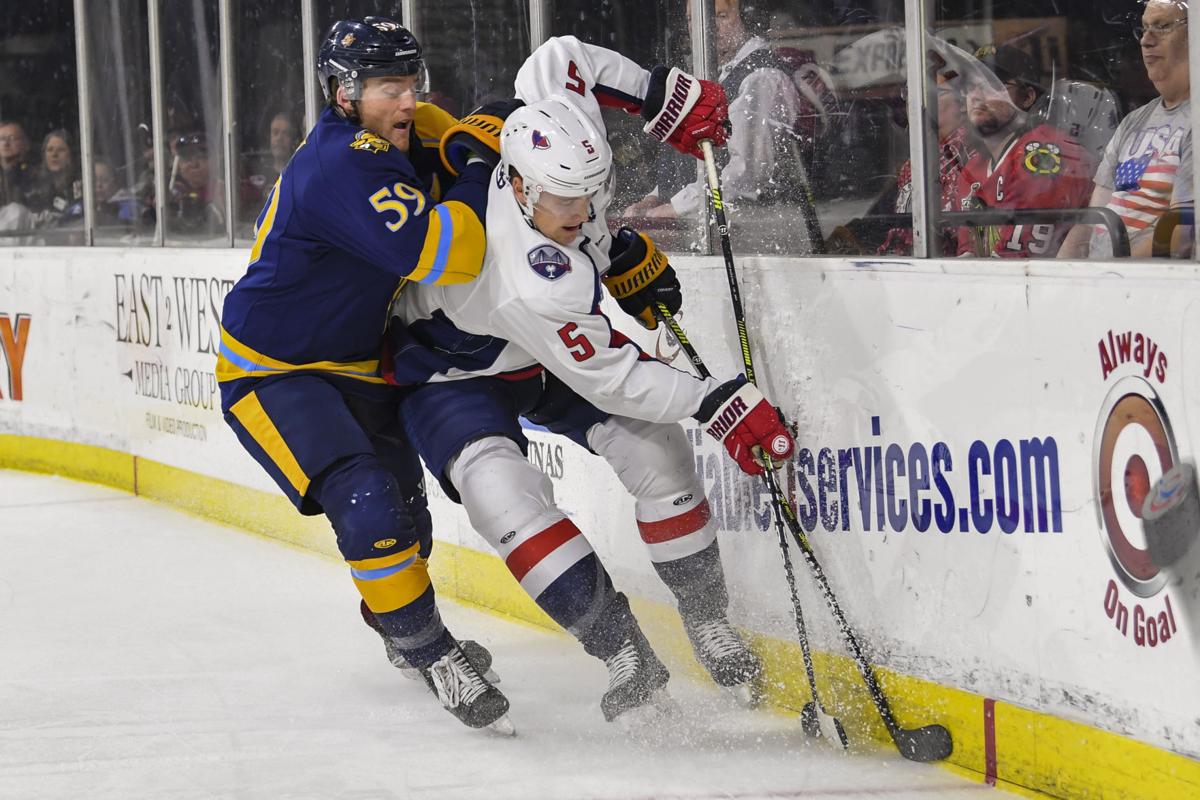 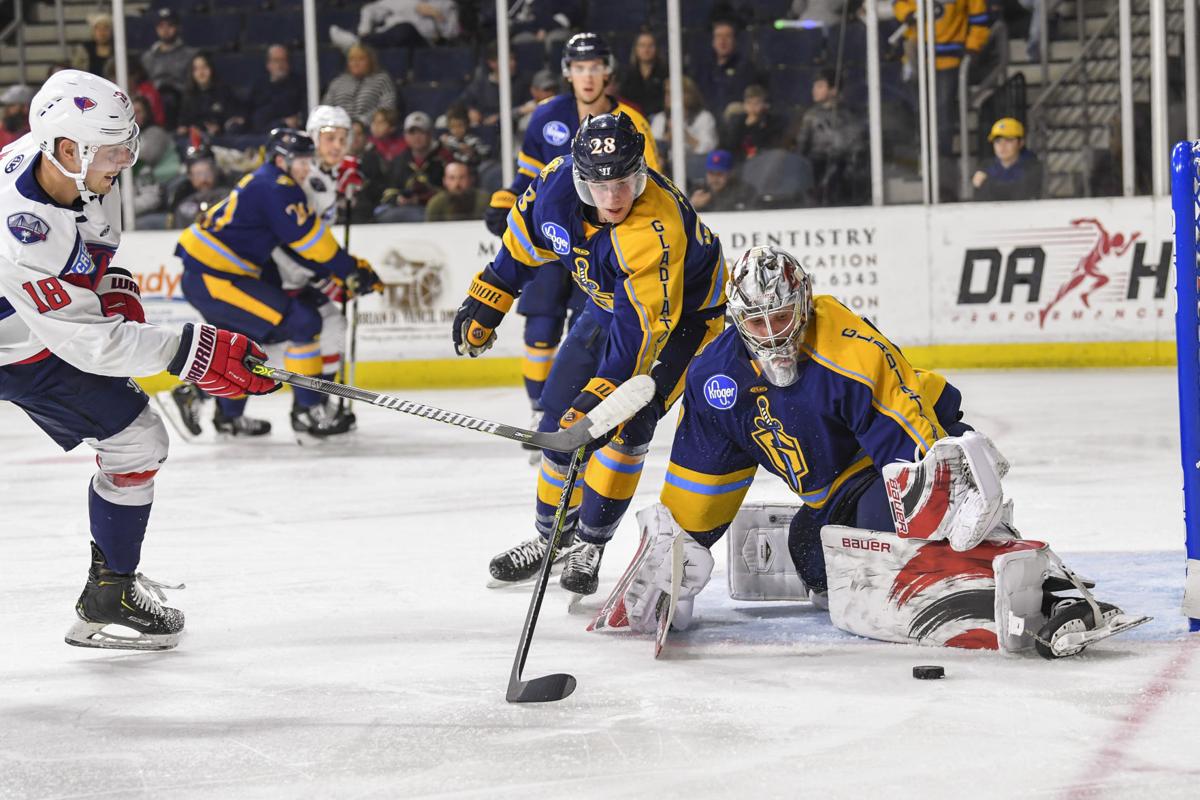 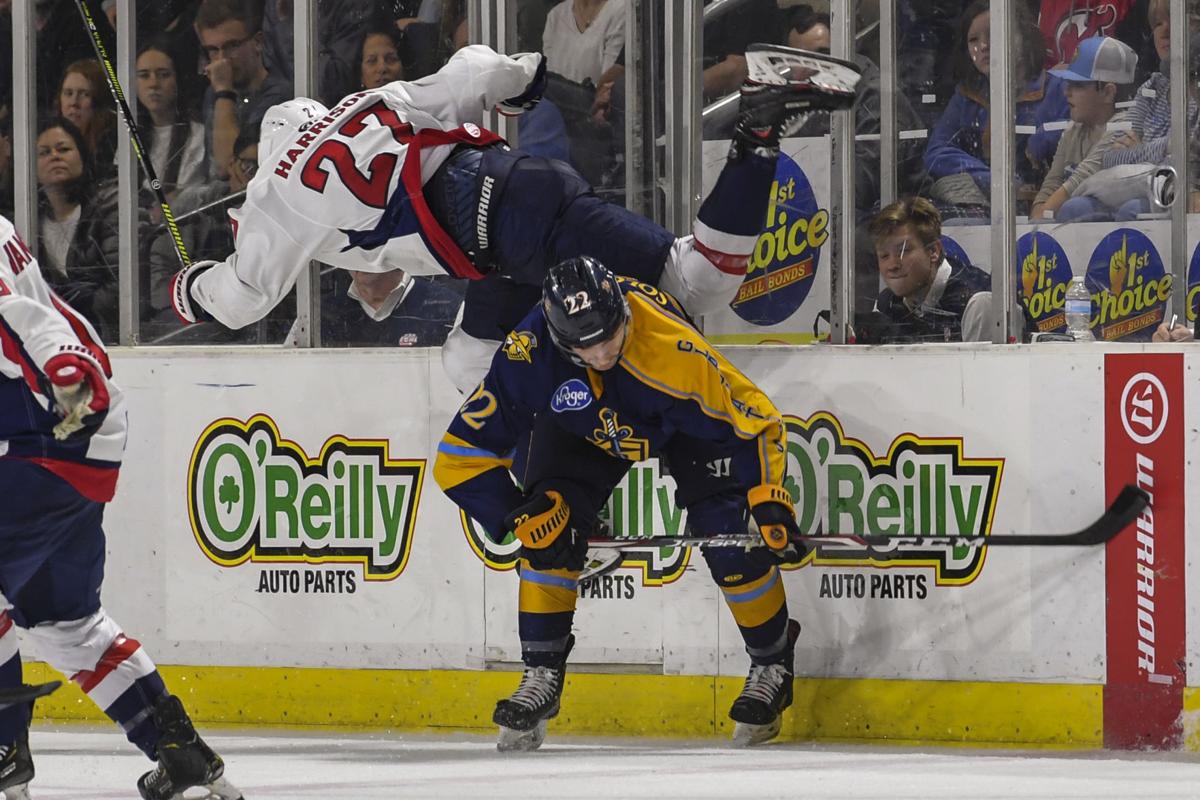 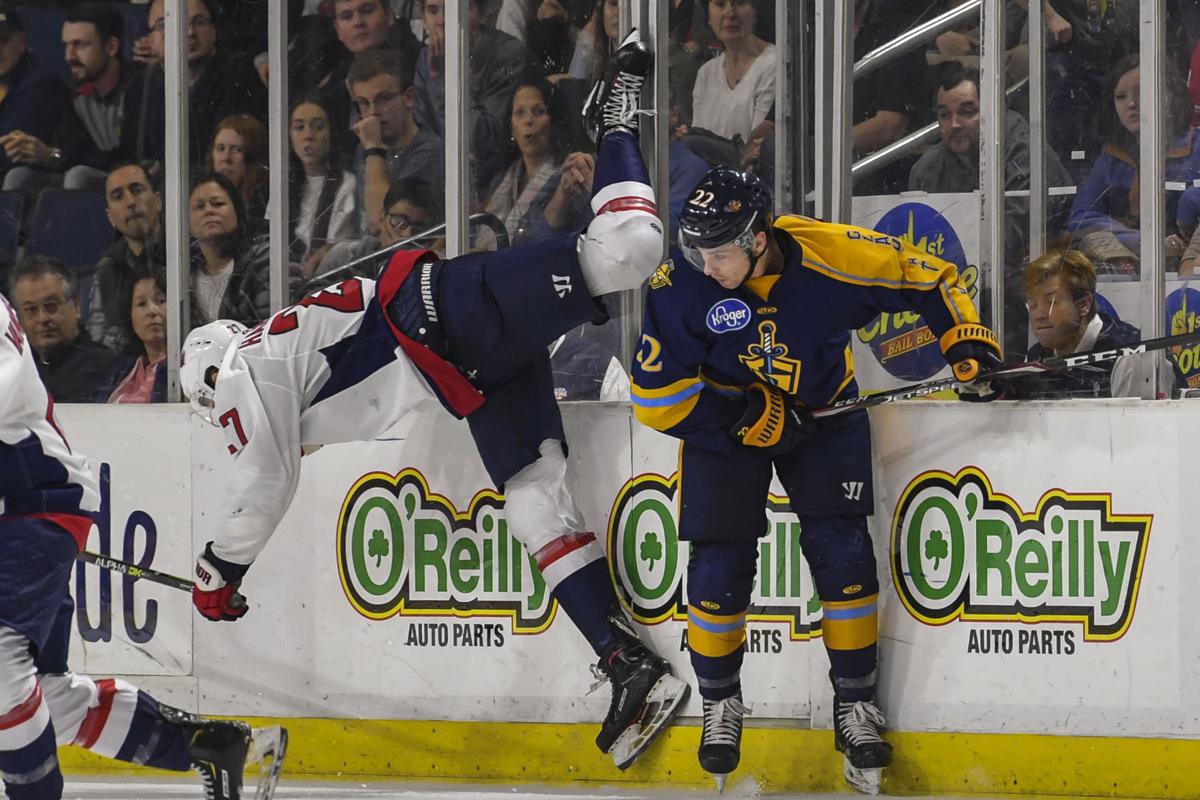 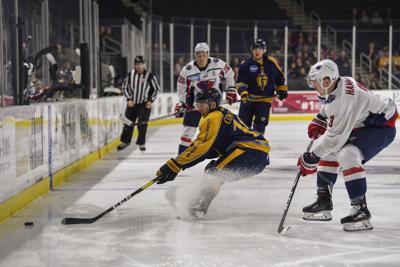 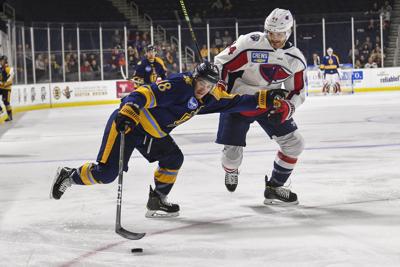 DULUTH — For the latter half of Friday’s game against the South Carolina Stingrays, the Atlanta Gladiators were every bit the equal of one of the ECHL’s top team.

However, as might be expected, that kind of effort is usually not good enough against a team like South Carolina, and it wasn’t in what turned out to be a 3-1 Stingrays’ win before 3,746 fans at Infinite Energy Arena.

First period goals by Tim Harrison and Matthew Weis proved to be the difference as South Carolina extended its lead in the Eastern Conference standings to eight points over idle Newfoundland.

The Gladiators did manage a win in the back-to-back night slate against South Carolina, but coach Jeff Pyle is looking for a little more consistency out of his team.

“Our effort early wasn’t good,” Pyle said. “That (South Carolina) team plays systematic, and they all do the same thing, and you can see it. They’re consistent with it. I’ve been trying to get our guys to do that, (but) again, we’ve got a few too many egos at times.

“When we’re good and systematic and structured and strong, we’re a good team. You saw at the end of the game, we started pressing and playing harder. We have potential, but it’s got to be consistently every shift. With a few holes in the lineup, we need everybody to be sharp and step up. … We’ve got some (defensemen) that are way too comfortable.”

South Carolina definitely came to play with a purpose after a night after Atlanta’s shootout win, a rare loss for the Stingrays, and dominated Friday’s first period, outshooting the Gladiators 17-3 in the opening frame.

Callum Booth, another recent acquisition — in this case reassigned from the AHL’s Charlotte Checkers to help Atlanta deal with a rash of injuries between the pipes — helped keep the Gladiators in the game amid the onslaught.

But the Stingrays were relentless, and Harrison got his team on the board after finishing off a nifty bit of tic-tac-toe passing from Matt Nuttle and Jonathan Charbonneau with a tap-in from the left doorstep for a 1-0 lead 4:58 into the first period.

Weis then made it 2-0 at the 17:02 mark with a spin-a-rama move from the right wing that deflected in off a Gladiators defensemen.

“We put a lot of goals in our own net, which shouldn’t happen,” Pyle said after a South Carolina goal deflected in off a Gladiator for the second straight night.

The Stingrays continued to dominate early in the second period, rolling their shot advantage to as much as 27-3 at one point before the Gladiators began to show some life in the latter half of the period.

A golden short-handed opportunity came with just under seven minutes left in the middle frame when Scott Conway sprung Eric Neiley on a breakaway, only to have South Caroilna goaltender Logan Thompson thwart him with a nice blocker save.

The Gladiators then kept the pressure on, especially during a four-minute double-minor to Tariq Hammond late in the period.

In fact, Atlanta had the final 13 shots of the period to cut the shot deficit down to 27-16, but couldn’t solve Thompson, and went into the second intermission still trailing 2-0.

In fact, the Gladiators nearly turned around the shot deficit for the game, outshooting South Carolina 24-5 over the final 27 minutes to cut the overall disadvantage down to 32-27.

But Thompson withstood the onslaught, especially during the double minor and three other Atlanta power plays than generated numerous scoring opportunities.

“(Thompson) played pretty good when they need they needed the saves,” Pyle said. “And I thought Boother was great in the first period. He was amazing. So we got good goaltending. We just need to make sure that take the strides (forward).”

Unfortunately for Booth and the Gladiators, their luck with goaltenders continues to be bad after the 22-year-old could not come out for the third period after suffering a knee injury late in the second period that seems likely to make him the teams fourth netminder on injured reserve less than 24 hours after joining the game.

Pyle was on the phone in his office immediately after the game and is confident a goaltender who had played with the team earlier this year will be returning to join Chris Nell, who was solid in his Gladiators debut Thursday.

He was also solid in the third period Friday, stopping four of South Carolina’s five shots in the final frame, but couldn’t stop Max Novak’s wrister from the top of the right face-off circle that extended the Stingrays’ lead to 3-0 with 12:20 remaining.

The Gladiators did get on the board when Sammy Asselin won an offensive zone face-off back to Neiley, who one-timed a slap shot past Thompson to cut the deficit to 3-1 with 10:23 left, but they could pull no closer, and look to rebound when the Greenville Swamp Rabbits come to Infinite Energy Arena on Sunday at 2:05 p.m.

“We could’ve shut it down. We could’ve got beaten bad,” Pyle said. “We had a chance. We came back hard and lost 3-1. It is what it is, but to take one of two from that team — they’ve lost twice (in regulation) all year — you’ve got to be perfect.”

Here's your chance to design equipment for NASA's proposed Venus rover and win $15,000

Avalanche in Colorado partially buried a snowmobiler, and it was all caught on video