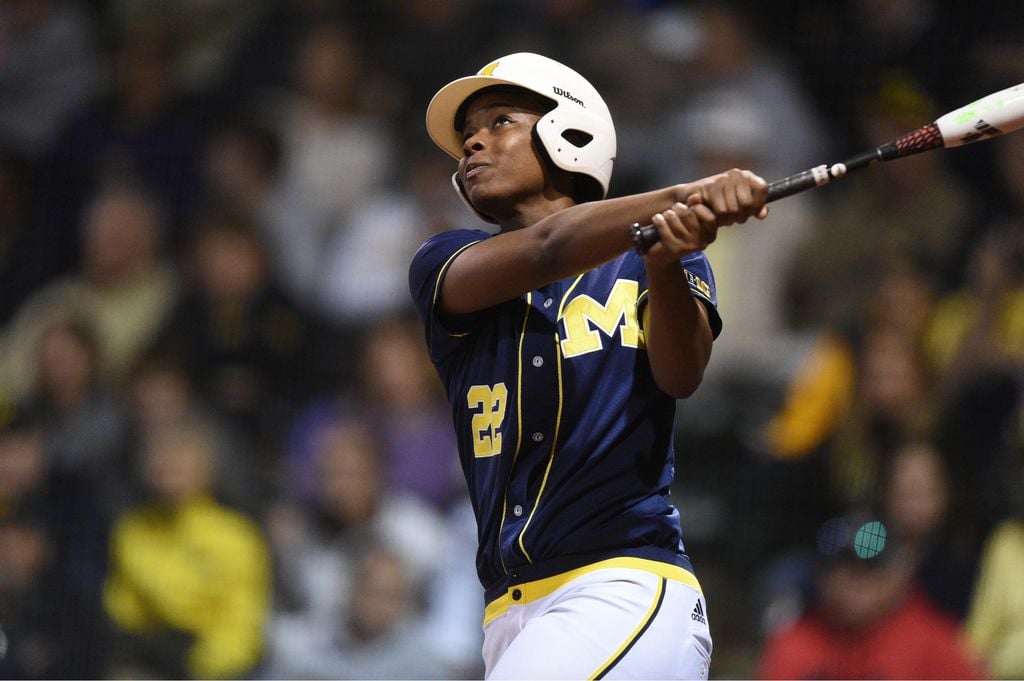 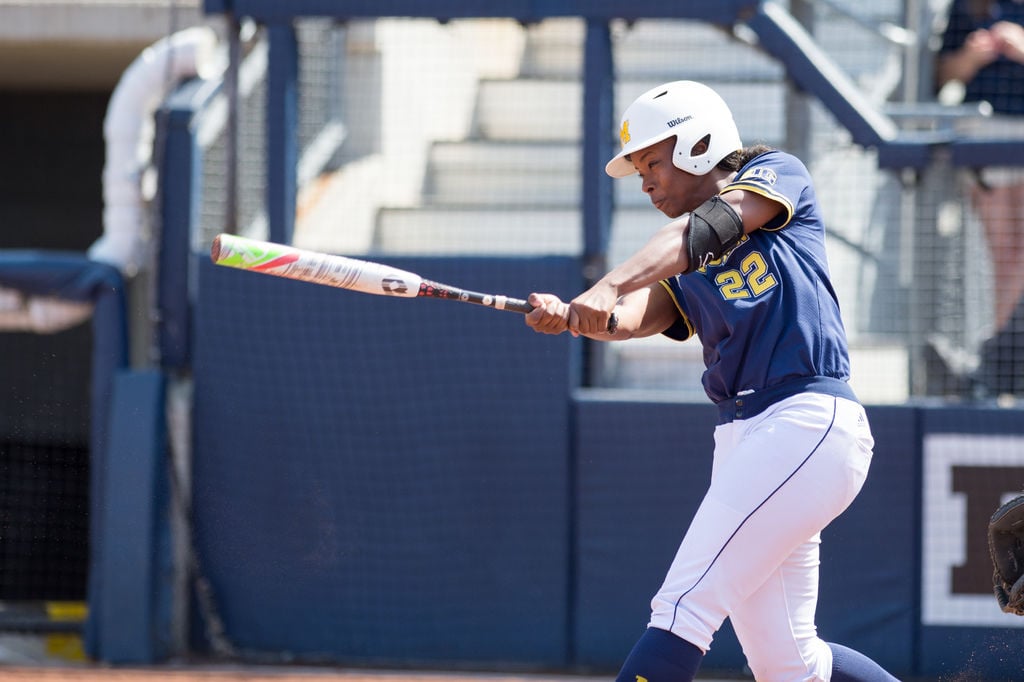 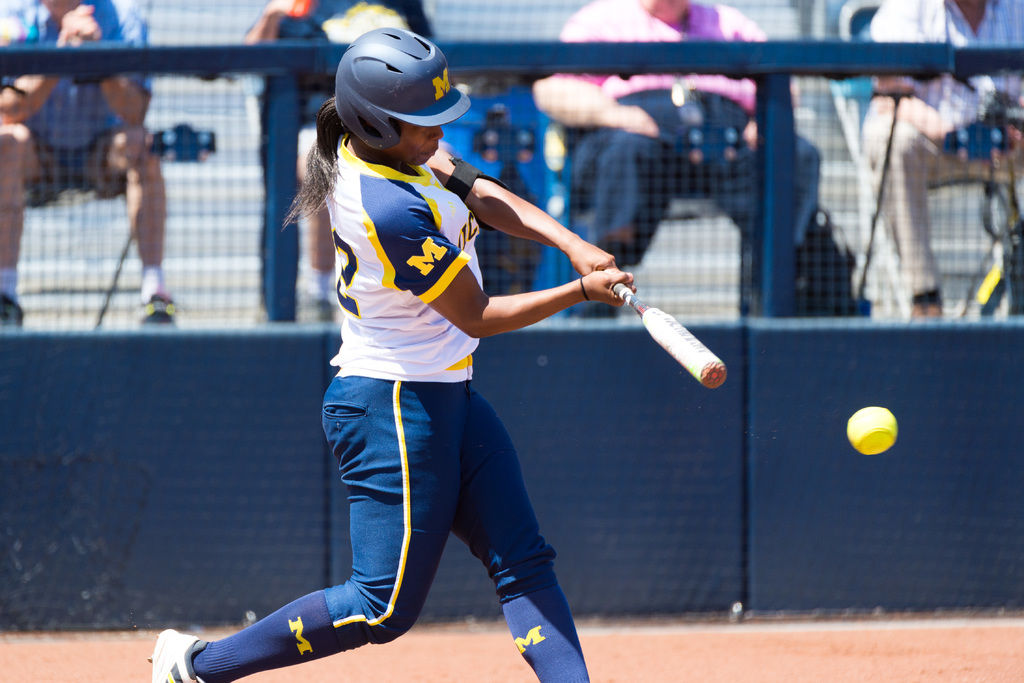 Greater Atlanta Christian grad Sierra Lawrence swings during a game with Penn State during the 2015 season. (Photo: University of Michigan) 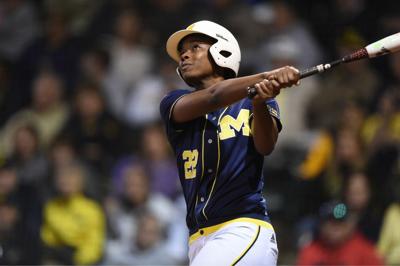 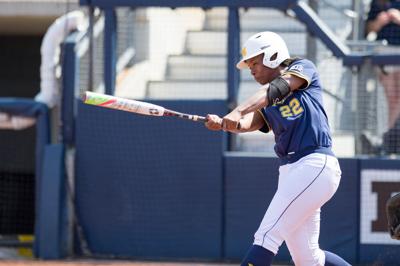 Greater Atlanta Christian grad Sierra Lawrence swings during a game with Penn State during the 2015 season. (Photo: University of Michigan)

Going one spot up from national runner-up is the Wolverines’ goal this week in the Women’s College World Series in Oklahoma City, and they can draw on last season’s successes with a number of the same players returning.

“It’s great to have experience,” said Lawrence, in her third WCWS in four college seasons. “It’s great that a lot of us have been here before and we know what it takes. It also helps with nerves. People know what to expect and I think that’s a great advantage.”

Lawrence has done her part to get Michigan back in the WCWS, hitting a career-high .440 with 11 home runs, 45 RBIs, 36 walks, 20 stolen bases and a .553 on-base percentage. Those stats are comparable to the first three seasons of her college career, except for batting average.

The outfielder hit .314 as a freshman, then .351 and .346 the next two seasons. But this year has seen her average soar nearly 90 points better than her previous season best.

“It’s been a good year,” Lawrence said. “I’ve been really confident. I’m just kind of staying relaxed. I think being relaxed has really helped me the most. I’m not stressing too much about whether I’m doing well or not at the plate. Just knowing I know how to hit the ball and going back to basics. … My goal every time at bat is hit the ball hard. If something good comes out of it, then great.”

Michigan, which opens the WCWS today at 9:30 p.m. against LSU on ESPN2, has relied heavily on Lawrence the past four seasons, and she has delivered throughout her career. She has started every game the past three seasons, as well as most of her freshman year, with 243 starts in her 246 career games. She has 41 home runs, 201 RBIs, 43 doubles, 72 stolen bases and 132 walks as a Wolverine.

The production has given her some interest in a softball career beyond college, but she isn’t sure if she will pursue a career extension.

“I was going to be done with it when this season’s over,” Lawrence said. “Here in a couple of weeks I have some options I’ll check out and make a decision then.”

Regardless of what happens in softball, Lawrence plans to finish up the final few electives she needs for her general studies degree this fall, then take the LSAT and apply to law schools.

“Originally, that’s want I wanted to do, go to law school,” Lawrence said. “I switched to a million different things and now I’m back at law school again.”

That future won’t be in her mind for the next week or so while the Wolverines pursue the title that narrowly eluded them last season. Win or lose, Lawrence is thrilled to play her final college softball games in the sport’s top showcase.

“It’s a really special season, especially to be able to end my career in Oklahoma City,” Lawrence said. “Every year it’s our goal to go back there, so I’m excited to go back there again. … It’s a great atmosphere. There are a ton of fans there. It’s a great feeling to step on the field with your teammates and play in front of all those people. Michigan has a great fan base so it’s fun to look up in the stands and see who traveled there.”

Uyghurs are desperate for action in Xinjiang. Some say only Trump can help

Half of all US adults say colleges that brought students back to campus made the right decision, study finds