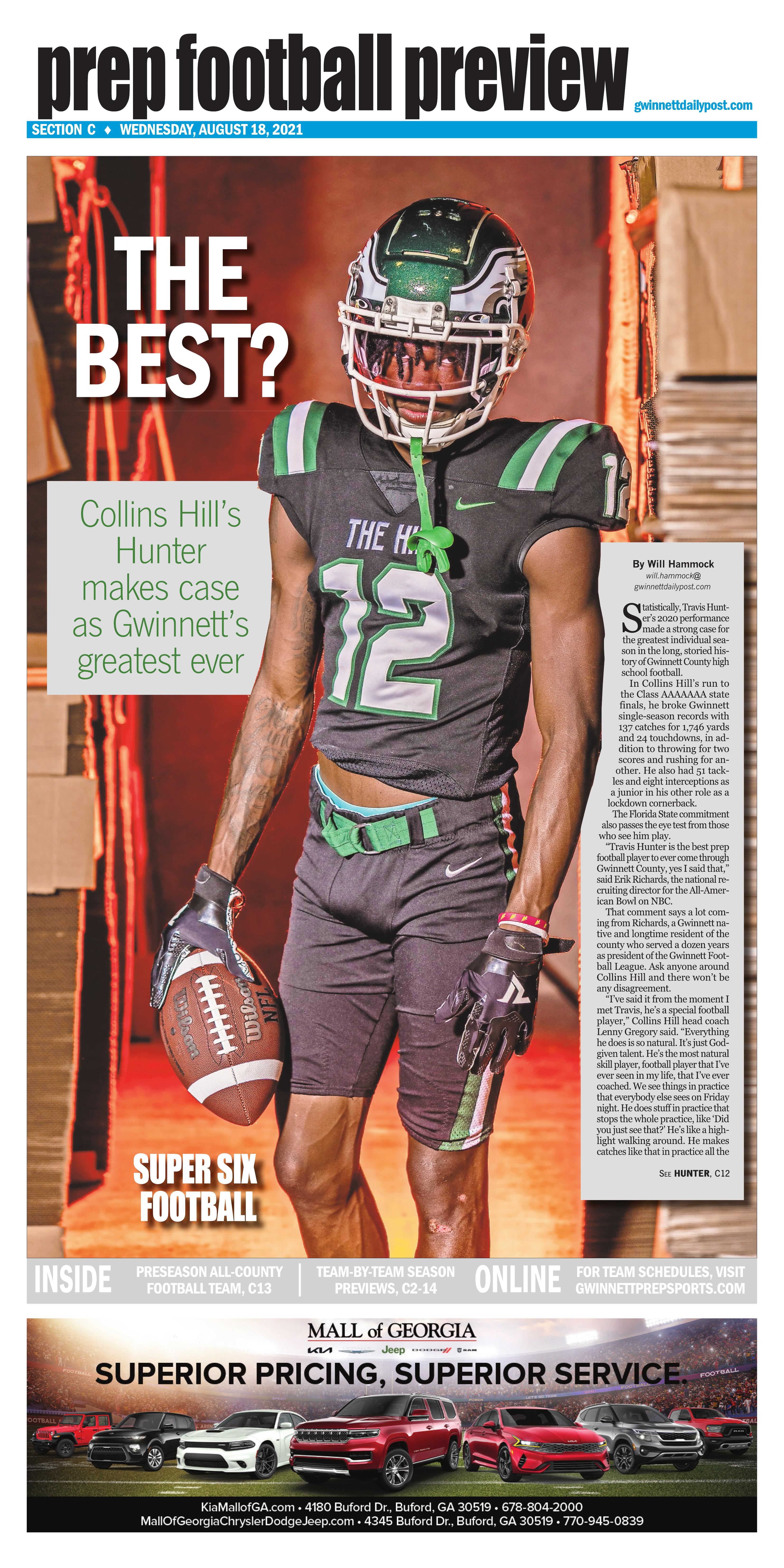 Collins Hill senior Travis Hunter, a standout at wide receiver and cornerback, put together one of the best seasons in Gwinnett history in 2020.

In Collins Hill’s run to the Class AAAAAAA state finals, he broke Gwinnett single-season records with 137 catches for 1,746 yards and 24 touchdowns, in addition to throwing for two scores and rushing for another. He also had 51 tackles and eight interceptions as a junior in his other role as a lockdown cornerback.

The Florida State commitment also passes the eye test from those who see him play.

“Travis Hunter is the best prep football player to ever come through Gwinnett County, yes I said that,” said Erik Richards, the national recruiting director for the All-American Bowl on NBC.

That comment says a lot coming from Richards, a Gwinnett native and longtime resident of the county who served a dozen years as president of the Gwinnett Football League. Ask anyone around Collins Hill and there won’t be any disagreement.

“I’ve said it from the moment I met Travis, he’s a special football player,” Collins Hill head coach Lenny Gregory said. “Everything he does is so natural. It’s just God-given talent. He’s the most natural skill player, football player that I’ve ever seen in my life, that I’ve ever coached. We see things in practice that everybody else sees on Friday night. He does stuff in practice that stops the whole practice, like ‘Did you just see that?’ He’s like a highlight walking around. He makes catches like that in practice all the time. All the time. I’ve seen him do things in practice and you just shake your head. Unbelievable.”

Hunter’s incredible junior season began with an eight-catch, 186-yard, three-TD effort in a victory over Carrollton in the Corky Kell Classic, featured seven combined TDs in two games against Alpharetta (once in the regular season and once in the playoffs) and included 10 catches for 187 yards and three TDs in the first half of a region title-clinching win over Mill Creek. He had 11 receptions for 183 yards and three scores in the state semifinals against Lowndes, then 11 grabs for 100 yards and a TD against Grayson in the finals.

That came after an impressive sophomore season in 2019 when he had 49 catches for 919 yards and 12 TDs, as well as a Gwinnett-best seven interceptions.

He likely will add more staggering stats to his career totals this season, but it won’t be his focus.

“I’m trying to get back to the state championship and win it with my team,” Hunter said. “I don’t have any personal goals.”

Thoughts of a 2021 state championship began in the locker room at Georgia State shortly after last year’s finals loss to Grayson.

“Right after the game. Right after the game,” Hunter said of when the Eagles started working toward this season’s championship run. “We really just sat down and we realized we were a really good team when we click and gel. We figured out once we got to the state championship game, we didn’t do what we normally do. So we realized we’ve got to do what we normally do and we’ll be back.”

Finishing a win away from a title served as motivation throughout the offseason.

“Motivation, just grind mode. Hearing a lot of people saying we got lucky last year. Turning on my grind mode, listening to that just helped me out a lot,” Hunter said.

Hunter is confident his team can win that championship this season, exhibiting a self-assurance he developed growing up in West Palm Beach, Fla. (he moved to Gwinnett as an eighth-grader).

“My mindset is nobody can beat us,” Hunter said. “I’ve always been like that. I believe I’m the best player on any field I step on. … My dad always told me I’m the best kid that ever played football. I kept that mindset.”

National recruiting rankings back up those best player thoughts. He is 247Sports.com’s No. 1 ranked recruit nationally in the Class of 2022, moving into that spot earlier this month when quarterback Quinn Ewers gave up his high school eligibility and enrolled at Ohio State. He is a consensus five-star prospect with a whopping 0.9996 rating in the 247Sports composite rankings, and the No. 1 prep cornerback in the country. He is the No. 3 national prospect in the ESPN 300, and the No. 2 prospect nationally by Rivals.com.

The 6-foot-1 Hunter, though he shines on both sides of the ball at the high school level, plans to play cornerback at Florida State (he did say the Seminoles may use him on offense as well). His defensive skills don’t get as much publicity as what he does with the ball in his hands, but his future is bright on that side of the ball.

“(Hunter) shuts down a whole field (at cornerback),” Gregory said. “We play him to the field (side) on purpose. Most of the high school game is played on the hashes and he’s the corner to the field. If you’re brave, you feel confident and you throw it out there, there’s a good chance he’s going to pick it. So he really shuts down the field and makes people go into the boundary and the 12th man is the boundary.”

He plans to play that position before long at Doak Campbell Stadium in Tallahassee, Fla., but he still hasn’t been to a Florida State football game there. His first will be the Sept. 5 opener against Notre Dame.

“I still have never been to a game there, but I’m going to the first game of the season,” he said. “It’s going to be good now that COVID is opening things back up. … I’ve heard it’s very loud. It’s always loud.”

Hunter plans to graduate after this semester and enroll early at Florida State, the school he committed to on March 3, 2020. Other colleges continue to try to change his mind.

“There’s a lot of colleges still coming at me,” Hunter said. “I don’t let it distract me. I pretty much stay focused.”

The focus is clearly on a state championship.

“I’ve been trying to take a leadership role, that’s been my mindset,” he said. “If I’m doing the right thing, (my teammates) are going to do the right thing. I just try to make sure I’m at my best.”

Click and hold your mouse button on the page to select the area you wish to save or print. You can click and drag the clipping box to move it or click and drag in the bottom right corner to resize it. When you're happy with your selection, click the checkmark icon next to the clipping area to continue.