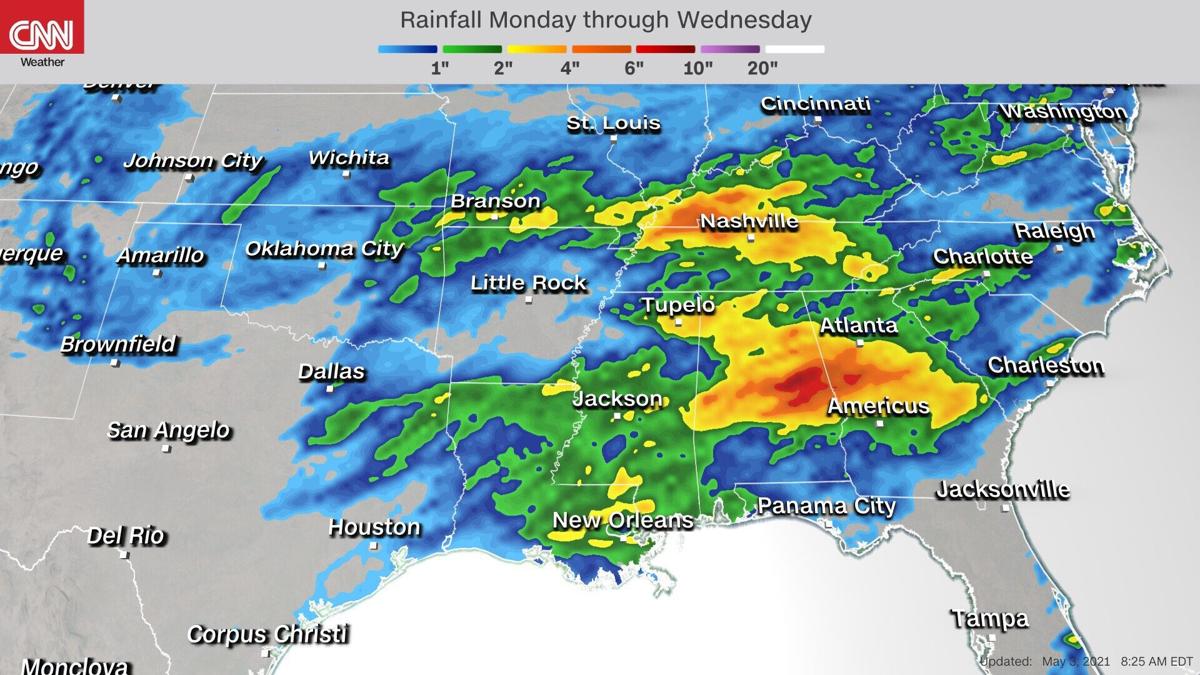 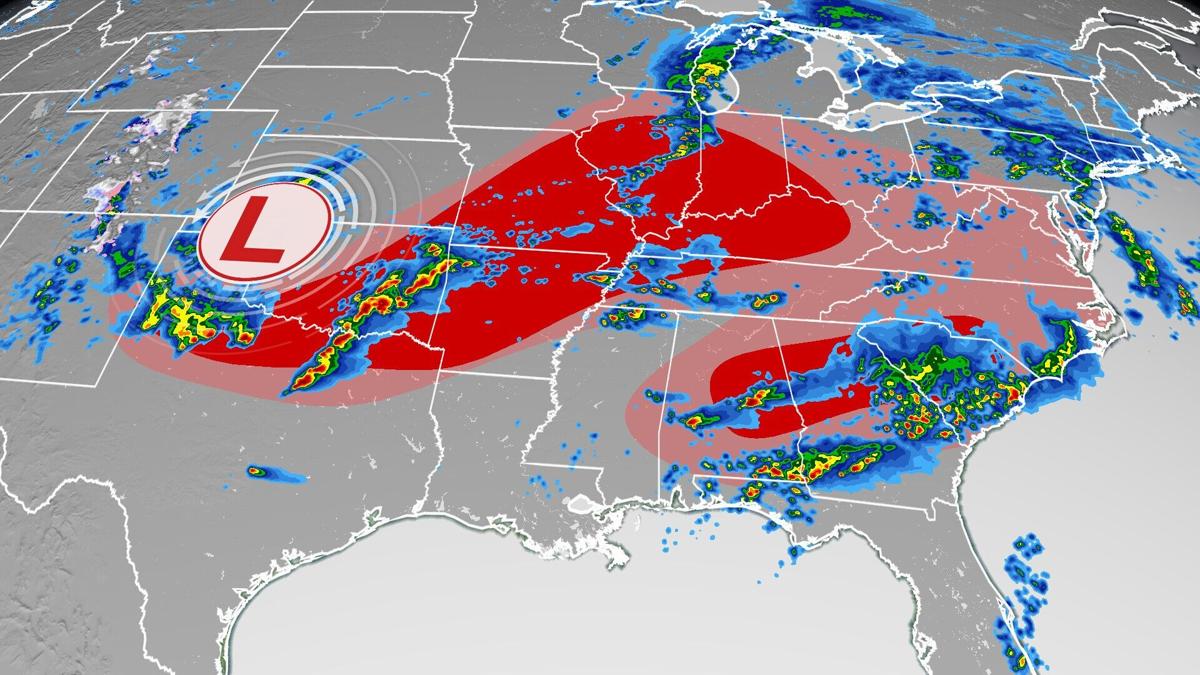 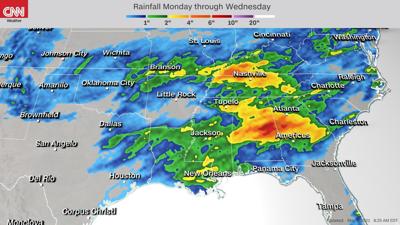 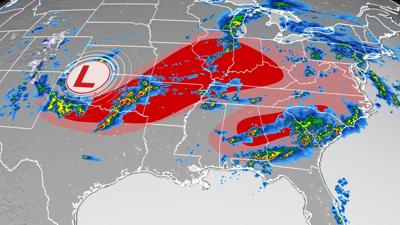 Severe weather, with the likelihood of tornadoes, threatens more than 100 million people from the southern Plains through the Mid-Atlantic on Monday as intense storms march across the country.

A second day of tornadoes are likely today into tonight. Sunday night, tornadoes struck at least three cities in Mississippi, causing damage to buildings and knocking out power.

It's important to monitor these storms today and into tonight.

"The next round of significant severe weather begins tonight in the southern Plains and will move eastward. This new event will affect the same general areas as the storms last night and may even be more severe and widespread," says CNN meteorologist Chad Myers.

TRACK THE STORMS WITH OUR STORM TRACKER >>>

The same storm system that spawned tornadoes over the weekend is on the move, bringing the threat for the severe storms across the Southeast on Monday. Meanwhile over the Plains, a new system is developing and will spark a separate outbreak of severe weather into the overnight hours.

Tornadoes most likely in southern Plains and Ohio River Valley

The greatest risk for severe weather through tonight will be from Oklahoma through Indiana, where there is a level 3 out of 5, enhanced risk, according to the Storm Prediction Center. This includes Louisville and Evansville in Indiana and Fort Smith, Fayetteville and Jonesboro in Arkansas.

This region has the best chance for seeing a tornado and damaging winds, but large hail is also a threat, especially in northern portions of Texas and eastern Oklahoma.

Showers and storms Monday morning will exit the Ohio River Valley by midday, while the southern Plains remain dry most of the day.

By late afternoon, quickly moving thunderstorms will begin to form and they will persist into the night. Some of these storms are forecast to be supercells, which spin and can produce tornadoes. This tornado threat will continue into Monday night.

"A tornado risk may persist into the overnight hours as storms move from Oklahoma into parts of Arkansas/southern Missouri and approach the Mississippi River late," according to the Storm Prediction Center.

Storms could also become severe in the Dallas and Chicago areas, but the best chance will be between those two cities.

A second area for severe weather today will be in the Southeast. A level 2 out of 5, slight risk is in place for Charleston, Atlanta and Birmingham.

Marginal, level 1 out of 5, chances for severe storms stretch from the deep South through the Mid-Atlantic. Cities including Washington, Richmond and Charlotte are all included in this risk area.

GET YOUR LOCAL FORECAST HERE >>>

Unlike in the central US, the threat in the Southeast will primarily be during the daylight hours.

Thunderstorms are already tracking across interior parts of the Southeast this morning. There will likely be a break from this rain, at least for a few hours midday, before another round develops.

This round will need to be watched for severe storms this afternoon and evening. Reports of tornadoes, hail and damaging winds are expected with some of these storms.

Localized flash flooding will be possible with any of today's storms, with some locations measuring 1 to 3 inches of rain.

Many states across the Southeast have seen double their normal rainfall over the last month, so even 1 to 2 inches of additional rain could lead to flash flooding.

The threat doesn't end on Monday, however. The storm system over the Plains will make its trek toward the East Coast, fueling the risk for severe weather from the Gulf Coast through the eastern Great Lakes on Tuesday.

This puts a state like Mississippi back at risk for tornadoes, but tornadoes could especially be possible in parts of Louisiana, Alabama and Tennessee as well, where there is a level 3 out of 5 severe weather risk.

"Large hail, damaging wind gusts and a few tornadoes will be likely along with rainfall rates in excess of an inch per hour," said the National Weather Service office in Jackson, Mississippi.

A few showers and storms could be possible during the day, especially in the Tennessee River Valley, but the main event will be Tuesday evening into Tuesday night across the Gulf Coast states.

Flash flooding will be possible across the South thanks to the combination of heavy rainfall and all the rain that has fallen in recent days and weeks. A widespread 1-3 inches of rain is forecast across this region into Tuesday night.

By Wednesday, this line of storms should weaken by Wednesday morning as it approaches the East Coast of the US, but isolated severe weather will remain possible.

CNN's Monica Garrett and Judson Jones contributed to this report

PHOTOS: Gwinnett Animal Shelter Adoptable Pets of the Week — May 17

Photos of dogs and cats up for adoption at the Gwinnett County Animal Shelter for the week of May 17, 2020. Click for more.

A New Jersey wildfire has torched about 900 acres ... and counting

5 things to know for May 17: Mideast violence, coronavirus, Capitol riot, US policing, Tigray