You are the owner of this article.
Edit Article Add New Article
You have permission to edit this article.
Edit
Home
News
e-Edition
Sports
Entertainment
Opinion
Obituaries
Community
Multimedia
Marketplace
Help
BusinessCitiesCrimeEducationHealthNationalPolitics
1 of 8 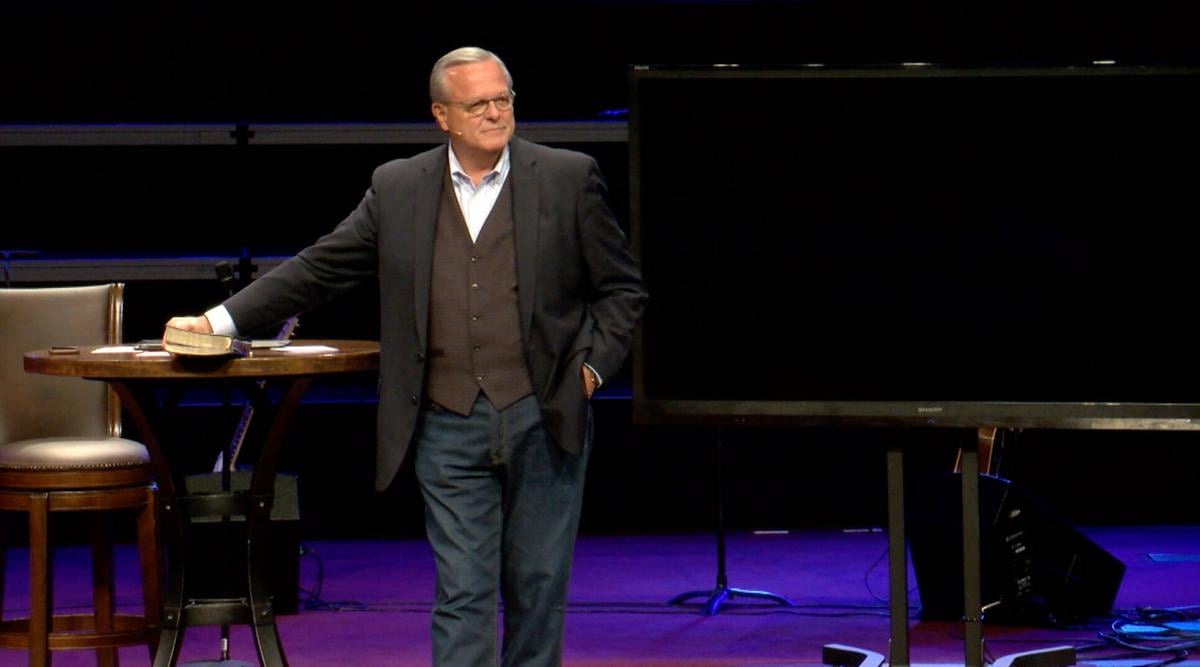 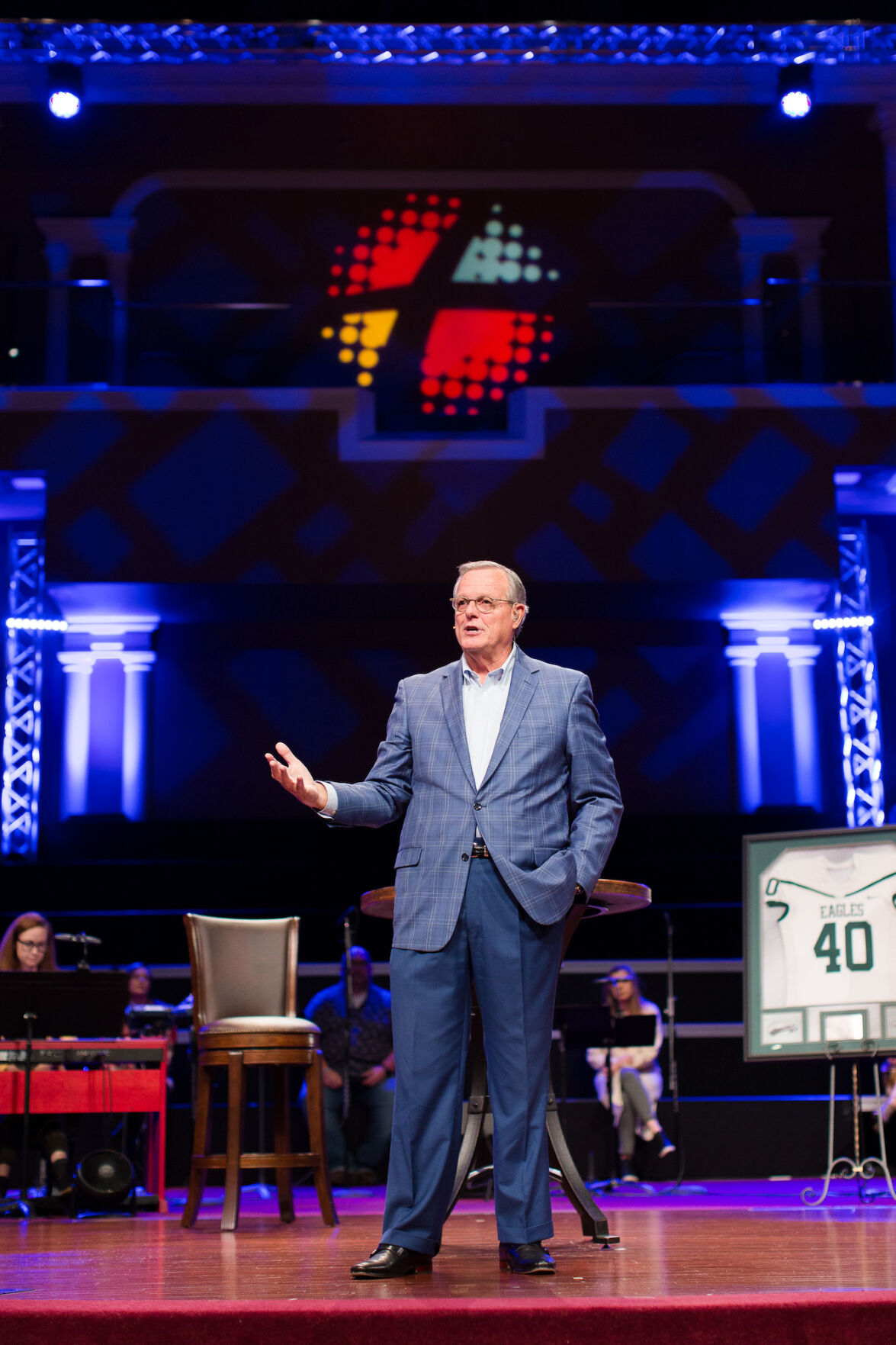 Dr. Frank Cox has been pastor of North Baptist Metro Church for 40 years. 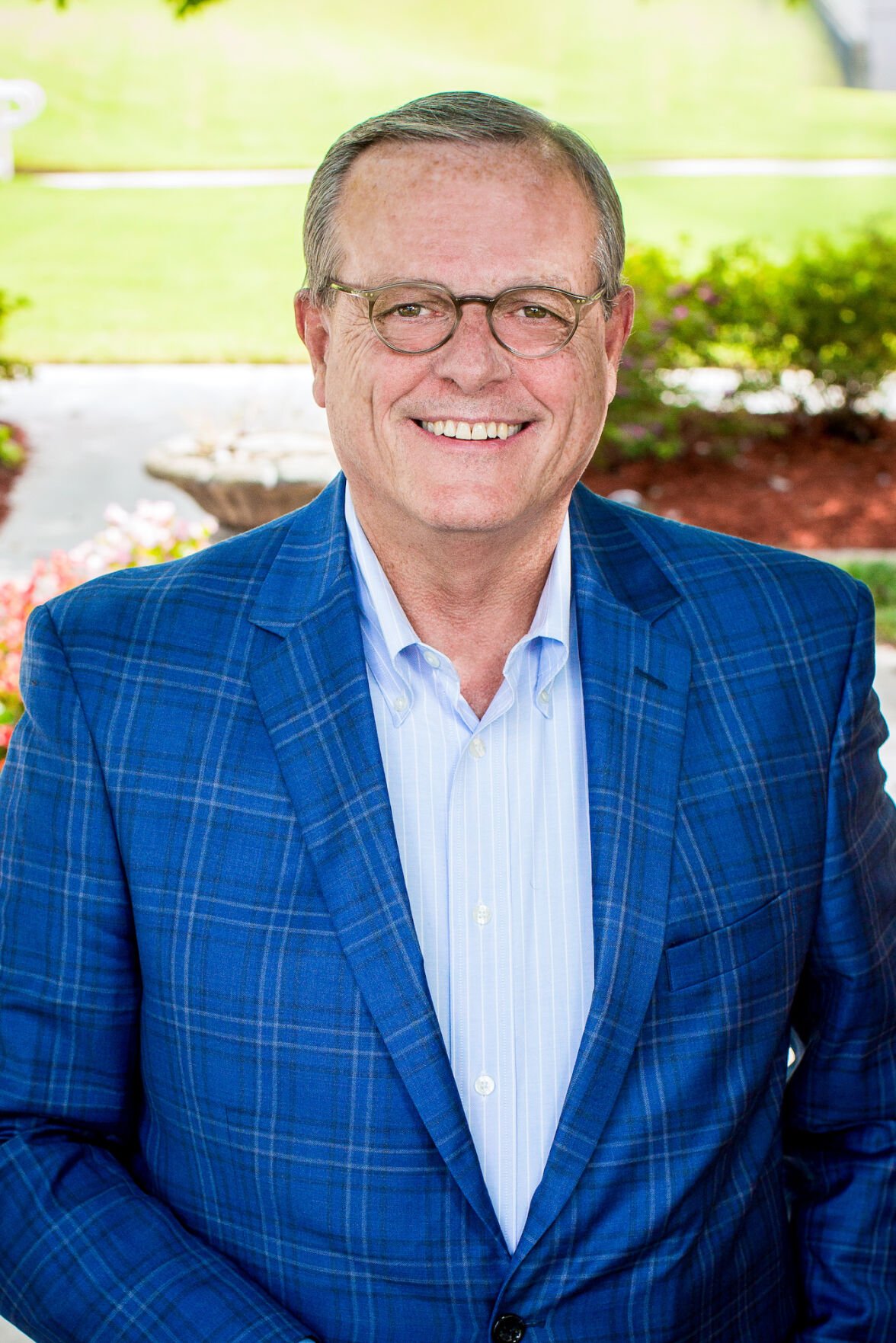 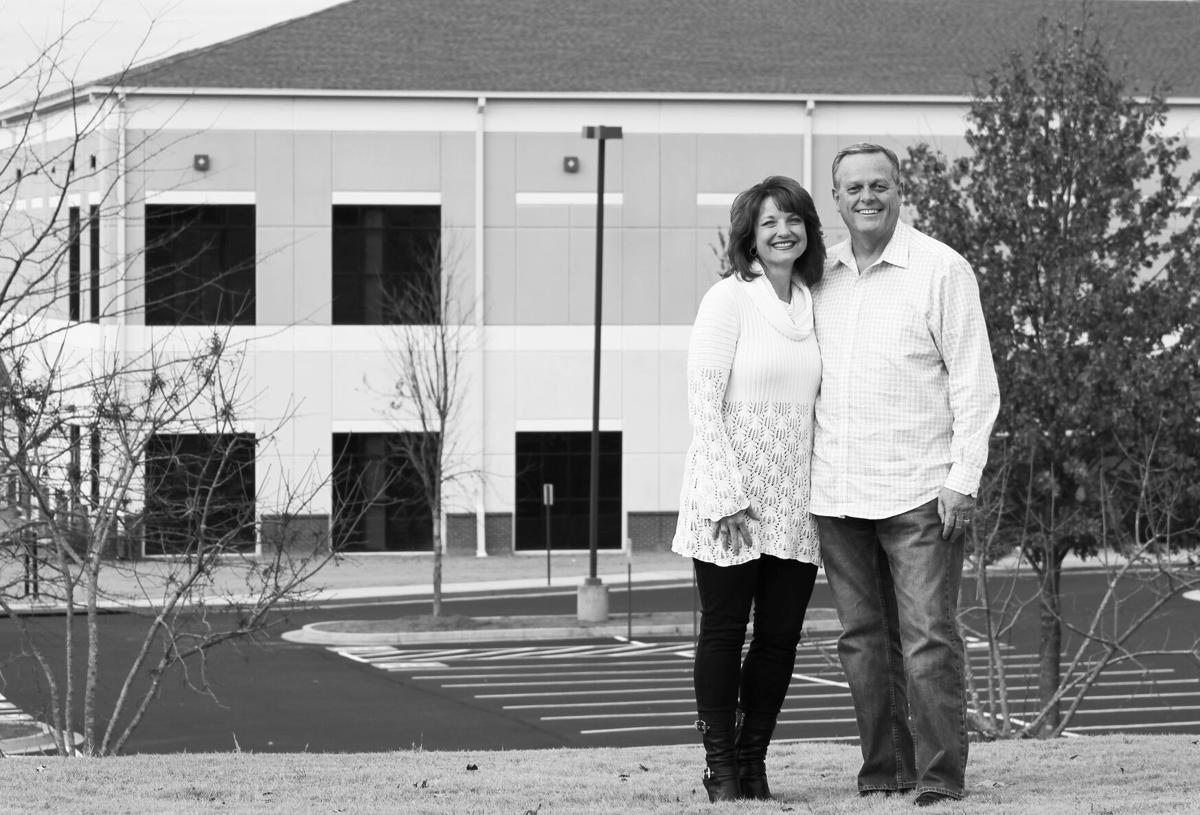 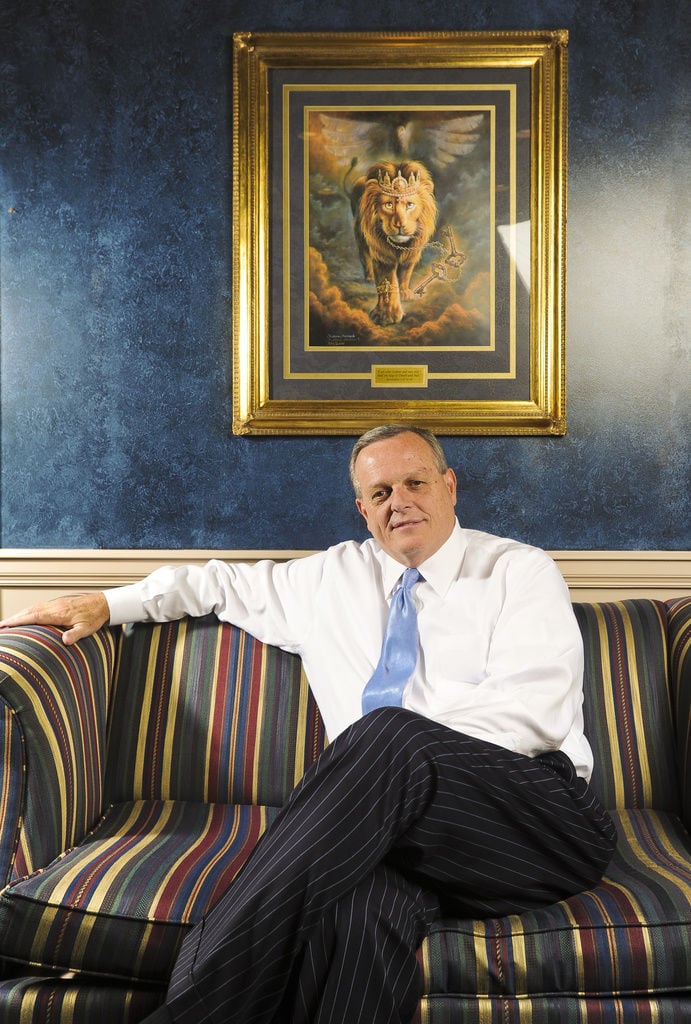 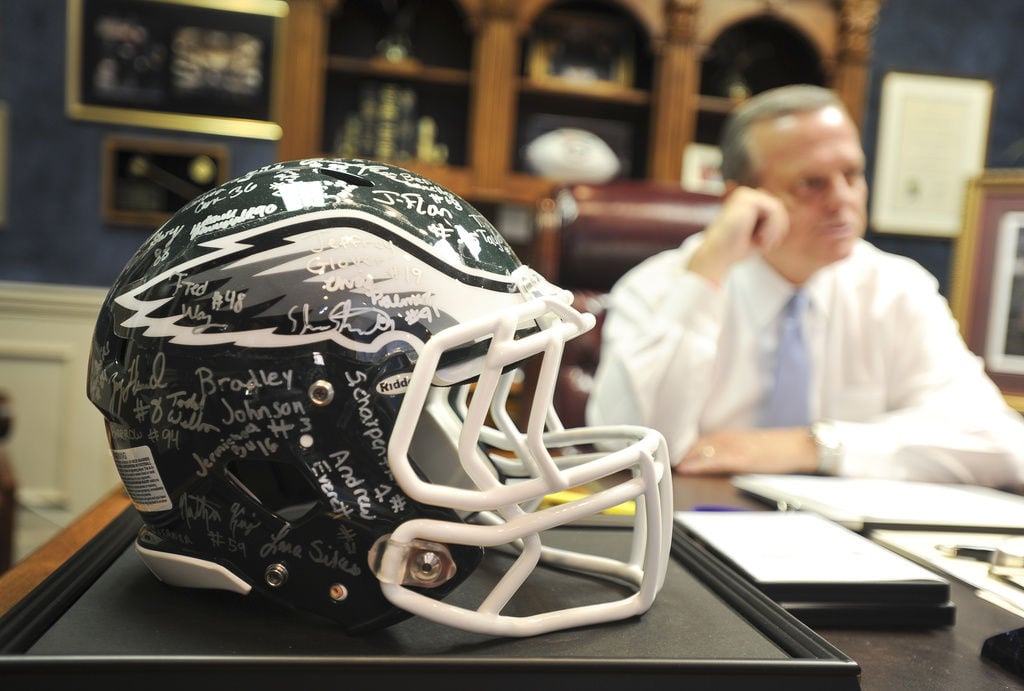 A Collins Hill football helmet sits on the desk of Pastor Frank Cox at North Metro Baptist Church in Lawrenceville during a 2015 interview. Cox serves as a chaplain to the football team and the coaches for the duration of the season. 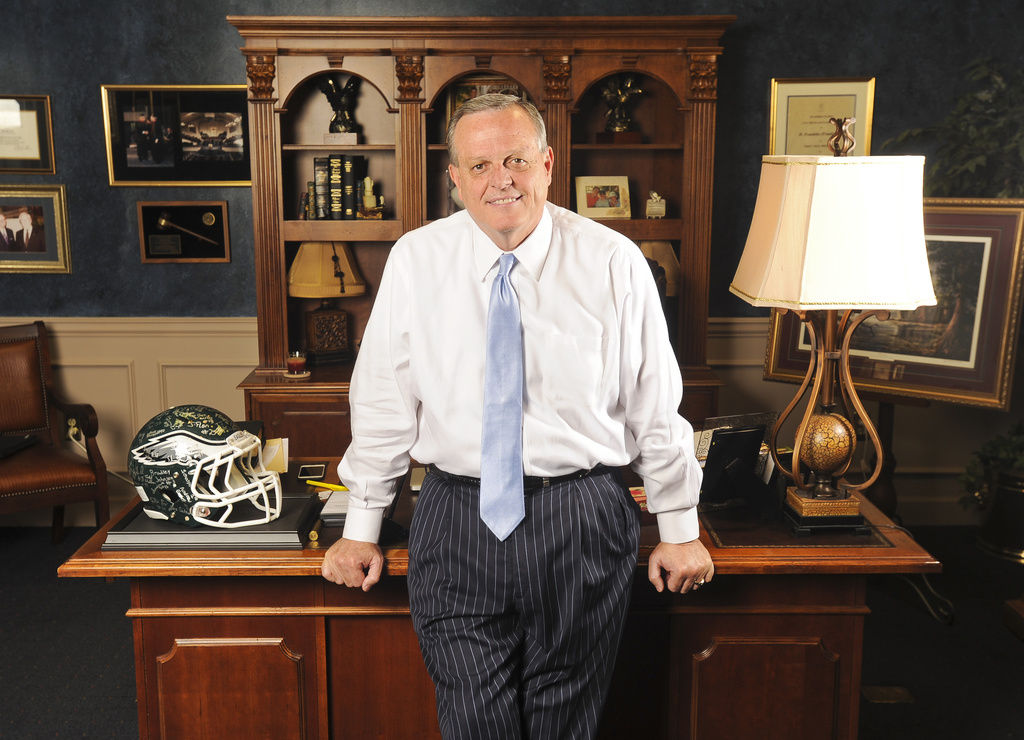 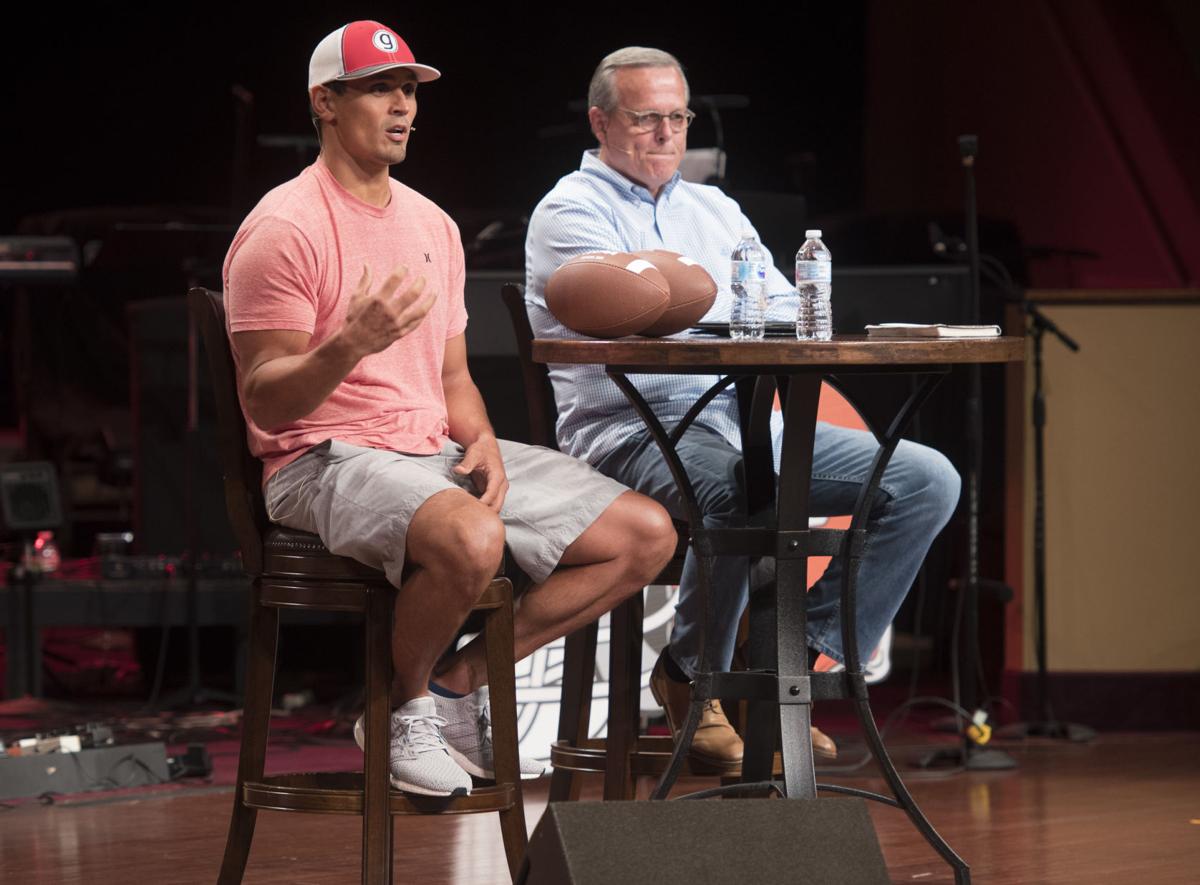 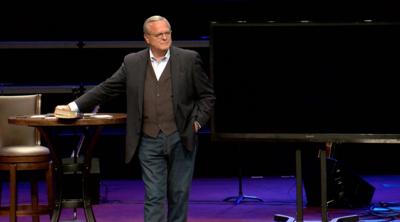 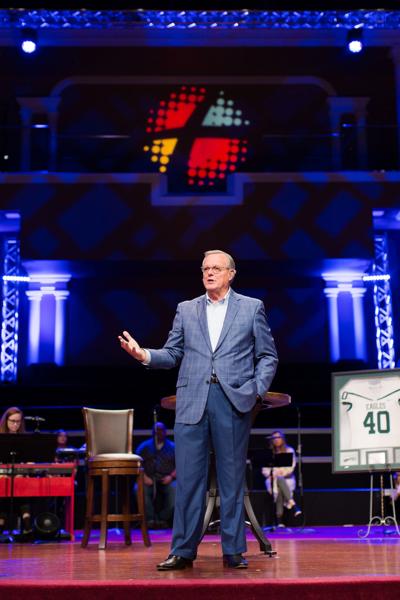 Dr. Frank Cox has been pastor of North Baptist Metro Church for 40 years.

A Collins Hill football helmet sits on the desk of Pastor Frank Cox at North Metro Baptist Church in Lawrenceville during a 2015 interview. Cox serves as a chaplain to the football team and the coaches for the duration of the season.

In 1980, Jimmy Carter was president (though not for long), the Georgia Bulldogs were on their way to winning the national college football championship, “The Empire Strikes Back” was the year’s most popular movie and 24-year-old Frank Cox was appointed pastor of Pleasant Hill Baptist Church.

Carter, the Bulldogs and “Star Wars” are still around and very much among us, as is Cox, who is celebrating his 40th year as pastor of what is now known as North Metro Baptist Church on Old Peachtree Road in Lawrenceville.

“I just love my people and have loved them for 40 years,” said Cox, remarking on remaining in one church (though not one place) for so long. “They’re not perfect, but I’m not either. We have seen that we’re a good match for one another and God has blessed us.”

The Tallahassee native was fresh out of New Orleans Baptist Theological Seminary, arriving to a Gwinnett County that was experiencing great change and a church that was resisting it.

“I have been a growth pastor and I saw all the growth in the county and I came,” said Cox. “And my first three to five years were just rough. Everything in the county was changing, all these people were moving in to this sleepy rural county. It brought tension all over the county, but especially to the church because people in the church thought, ‘Everything is changing, but this is one place I can keep from changing.’

“I had to face the battle of changing the mindset of what was then Pleasant Hill Baptist Church and it wasn’t pleasant on the hill, I can tell you that.”

Cox’s first years at the church were made more difficult with the death of his wife, but it was at that critical and sorrowful point that his church family aligned itself in his corner, confirming his decision to stay with the program.

“For two years we went through those rough waters,” he said. “But I look back then and I see how God used the death of my wife to solidify the true church, and the church rallied behind me and at that point I became wedded to them. They stood with me through a rough time and I stood with them through rough times. There was something God just wedded during that time.”

After more than a century on Pleasant Hill Road, the church moved in 1995 to a larger campus, a reflection of the membership growth North Metro Baptist has experienced.

“We’ve seen our church grow,” said Cox, an in-demand public speaker who has served as president and first vice president of the Georgia Baptist Convention. “We went from a small rural church of about 120 to the church we are today.”

Today North Metro Baptist has a membership of some 5,000, with more than 1,100 active attendees (although that has been reduced significantly during the coronavirus pandemic). Perhaps the most interesting story about the transition involved some three dozen gravesites in a small cemetery at the Pleasant Hill property.

“I tell people all the time I believe in the resurrection because I saw it,” said Cox, adding that the church agreed to move the graves to any cemetery the involved families sought.

“We moved those graves and that was a challenge within itself. The cemetery was about 40 years old and we could find the families pretty easily and I think there was between 35 and 40 burials. We were able to relocate them. I would only want to do that once in a lifetime. We tried to be respectful of the families and locate them to wherever they wanted to go.”

Cox, who remarried in 1987 (he and his wife Mary have three children and five grandchildren), said that one of the true blessings of continuance is that he’s had many opportunities to be witness to life’s significant events.

“As we have grown together as pastor and people, I’ve been able to experience a lot of things that some pastors never get to experience because of longevity,” he said, noting most pastors have a shelf life of roughly three and a half years before moving on. “I’ve seen people from when they were born, I’ve watched them raised in our church, I’ve buried them, I’ve baptized them, I’ve performed their marriage ceremonies and I’ve watched their kids be born. For two generations at this church, I’m the only pastor they’ve ever known. So I call that doing a life with them.”

There have been numerous opportunities for Cox to depart Lawrenceville for other positions, but he said the timing just never was right.

“When people ask me why have I stayed for 40 years I jokingly say because nobody else wanted me and that’s partially true,” he quipped. “I have had the opportunity to go to other places and I’ve had the opportunity to take different denominational positions, but each time those opportunities came along, the church was either engaged in a building program or an expansion of ministries, and my philosophy is you should never start something and not see it all the way through.

“So I chose to forfeit what some would say were greater opportunities because of the deep love I have for our people and the place here.”

By the same token, Cox is commemorating his fourth decade in the pulpit at North Metro Baptist, but he has no plans to retire from his calling.

“We have things we’re looking into for the future,” he said. “I can’t deny that I’m 64, but at the same time I’ve got a couple more things I need to accomplish with our church in order to put it into a position for the future.

“This is not a retirement; it’s a celebration. This is a major celebration that probably 95 to 97% of Southern Baptist churches will never experience. Very seldom do you have a pastor who’s been there 40 years, so this is a celebration, but retirement is still somewhere down the road.”

Here are some statistics regarding his tenure at the Lawrenceville area church: