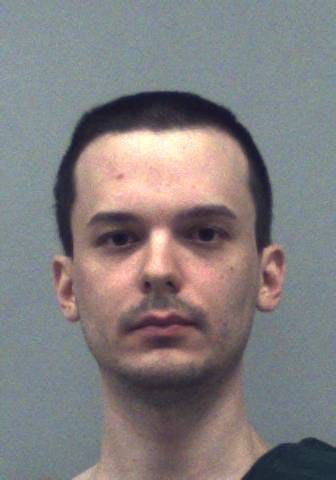 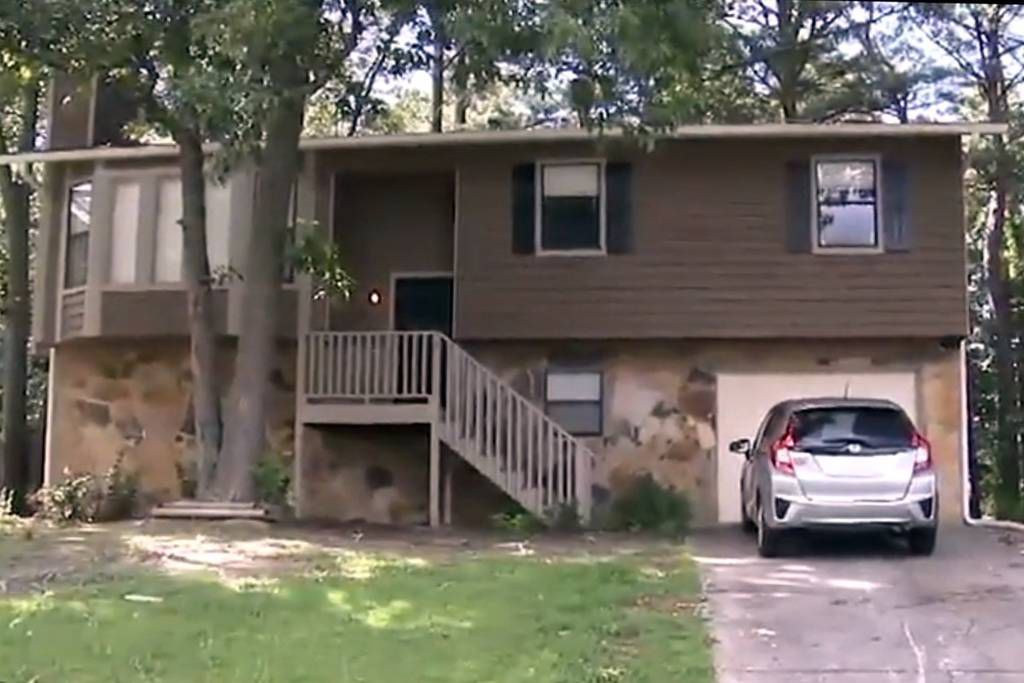 The FBI and police found a missing teeenager at this home at 2723 Seneca Trail in Duluth. (Photo: Fox5 Atlanta) 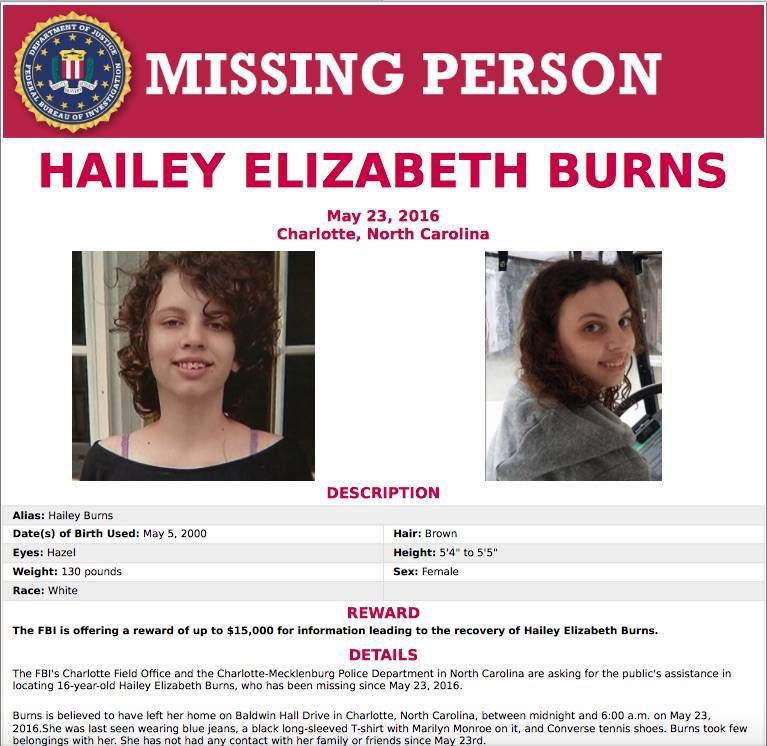 Hailey Burns has been missing from North Carolina since May 2016. (FBI) 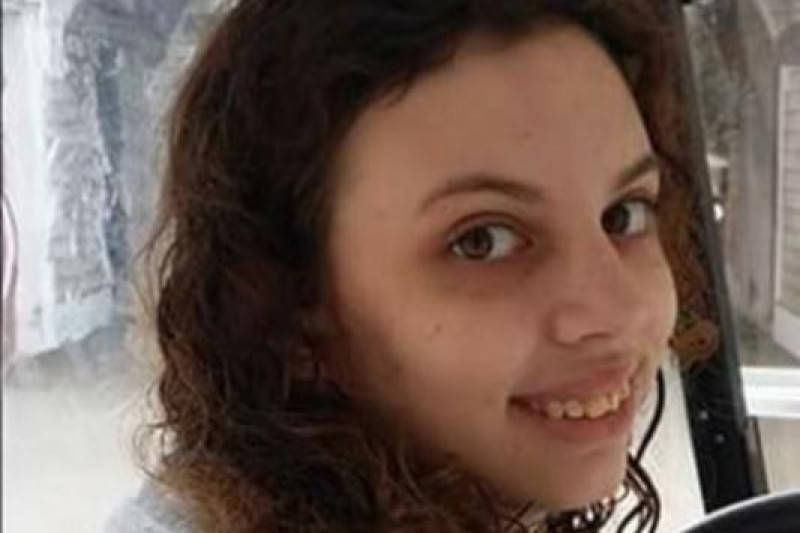 Hailey Burns has been missing from North Carolina since May 2016. (Photo: GoFundMe) 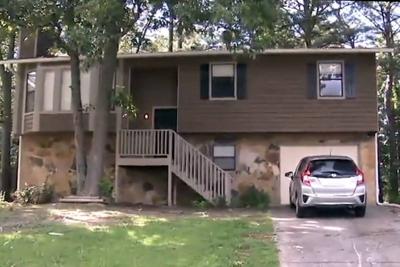 The FBI and police found a missing teeenager at this home at 2723 Seneca Trail in Duluth. (Photo: Fox5 Atlanta)

Hailey Burns has been missing from North Carolina since May 2016. (FBI)

Hailey Burns has been missing from North Carolina since May 2016. (Photo: GoFundMe)

For the past year, a missing teenage girl has been living as a prisoner in an unsuspecting middle-class Duluth neighborhood, where she was reportedly made to perform sexual favors in exchange for food.

“She was confined in an upstairs bedroom and told she’d be arrested if she left,” according to additional information in a warrant.

Hailey Burns, 17, finally left that upstairs bedroom when FBI agents and detectives found her Saturday night. But it was Duluth resident Michael Ren Wysolovski, 31, who was arrested.

Burns has been missing since May 2016, when she vanished from her home in Ballantyne, N.C. At the time, Burns’ father told local news outlets that she left a diary behind detailing her plans to run away with an older man she’d met online.

“He gradually wormed his way into her good graces,” Anthony Burns told WBTV Charlotte. “He coerced her into listening to him and not following our directions and the next thing I knew my daughter wasn’t communicating with me.”

Some outlets have reported that Wysolovski was texting Hailey around that time, asking her to call him “daddy.”

Then, the teen disappeared. Eventually, she moved into Wysolovski’s home at 2723 Seneca Trail, which he bought on April 14, according to media reports.

Neighbors told the Daily Post that Seneca Trail was in a “quiet” area and Hailey’s arrival didn’t seem to change that. Most said they’d never met Wysolovski and a few said they’d just assumed he and Hailey were a quiet, normal couple.

One neighbor told WSB-TV that he once saw Hailey bringing groceries into the house. She waved hello to him and seemed normal.

“I thought nobody was living there, actually, because everything was closed up — the drapes, the blinds,” he told the station.

But according to warrants, what was happening inside that closed up two-story house with the Honda Fit sitting in the driveway was anything but normal.

Wysolovski reportedly controlled every aspect of the life of his 17-year-old captive. He even kept a food journal detailing how many calories she’d eaten each day, according to warrants.

If Hailey ate more calories than Wysolovski thought she should one day, she wouldn’t be allowed to eat the next. Sometimes, he made her perform oral sex in exchange for food, according to additional details in the warrants.

When doctors at Children’s Healthcare of Atlanta - Scottish Rite examined Hailey on Sunday, they “determined she was suffering from malnutrition,” according to warrants.

Eventually, Hailey reportedly reached out for help. The girl’s mother, Shaunna Burns, told Charlotte media outlet WSOC that her daughter met a Romanian woman online. Hailey told the woman she was missing and sent her a picture from the window of the room where she was held captive.

WSOC reported that the tipster reached out to Hailey’s parents within five hours. The FBI reported that a Special Agent in Charlotte received information that the teen might be at a home in the Atlanta area.

“After a night of sleuthing and driving to Georgia our sweet baby is coming home with us,” Shaunna Burns posted on Facebook.

Anthony Burns posted on his Facebook that Hailey would be going home with the couple “after a brief hospital stay.”

“It is a blessing from God,” he posted. “Please pray for our family as we work to help Hailey feel how much she has been missed.

The Burns family never stopped looking for Hailey. Just last month, on the one-year-anniversary of her disappearance, Shaunna pleaded publicly for the teen’s return. The FBI was offering a $15,000 reward.

Now that she’s back, the couple is reportedly asking for privacy to focus their daughter.

Gwinnett County police booked Wysolovski into Gwinnett County jail on Sunday at 5:16 a.m. According to court documents, it’s the first time he’s been in trouble in Gwinnett — though recent Facebook posts suggest other women have felt victimized by him in the past.

Wysolovski remained emotionless as he was denied bond during a hearing on Monday afternoon. At that same hearing, the court appointed Attorney Matthew Crosby to represent him.

In a statement on Monday, Crosby said he wasn’t ready to discuss the case, yet.

“I have met with Michael and have obtained copies of the Gwinnett County warrants that have been issued against him,” Crosby said. “Right now, it would be premature to comment on the case as I am just learning the scope of the allegations and beginning my investigation.”

Wysolovski faces charges of felony aggravated sodomy, felony child cruelty, felony interference with custody and felony false imprisonment. If convicted of each offense, he could face more than 55 years in prison.