A University of Georgia basketball player who joined the Bulldogs after transferring from George Mason University during the off-season was recently arrested by Gwinnett County deputies. He was arrested on reckless and aggressive driving-related charges after he was observed allegedly driving nearly 100 mph and weaving through traffic on State Route 316.

Justin Kier was pulled over by Gwinnett County sheriff’s deputies at 12:30 a.m. on Oct. 9, after he was seen driving an SUV at a high rate of speed and weaving through multiple lanes of traffic on State Route 316.

“I was able to catch up to the vehicle and paced it from Cedars Road and Highway 316 until Highway 316 and Loganville Highway,” Deputy D.E. Henry wrote in his arrest report. “During this time, I was able to maintain the speed of the vehicle in question and my patrol car at 93 mph to perform a speed pace test on Highway 316 eastbound in (a) 55 mph zone. My reading was seen by myself on both my dash speedometer and Garmin GPS which is located and mounted to my patrol vehicle.”

Kier was charged with reckless driving, aggressive driving, speeding (34-44 over) and improper or erratic lane change or failure to maintain lane charges. 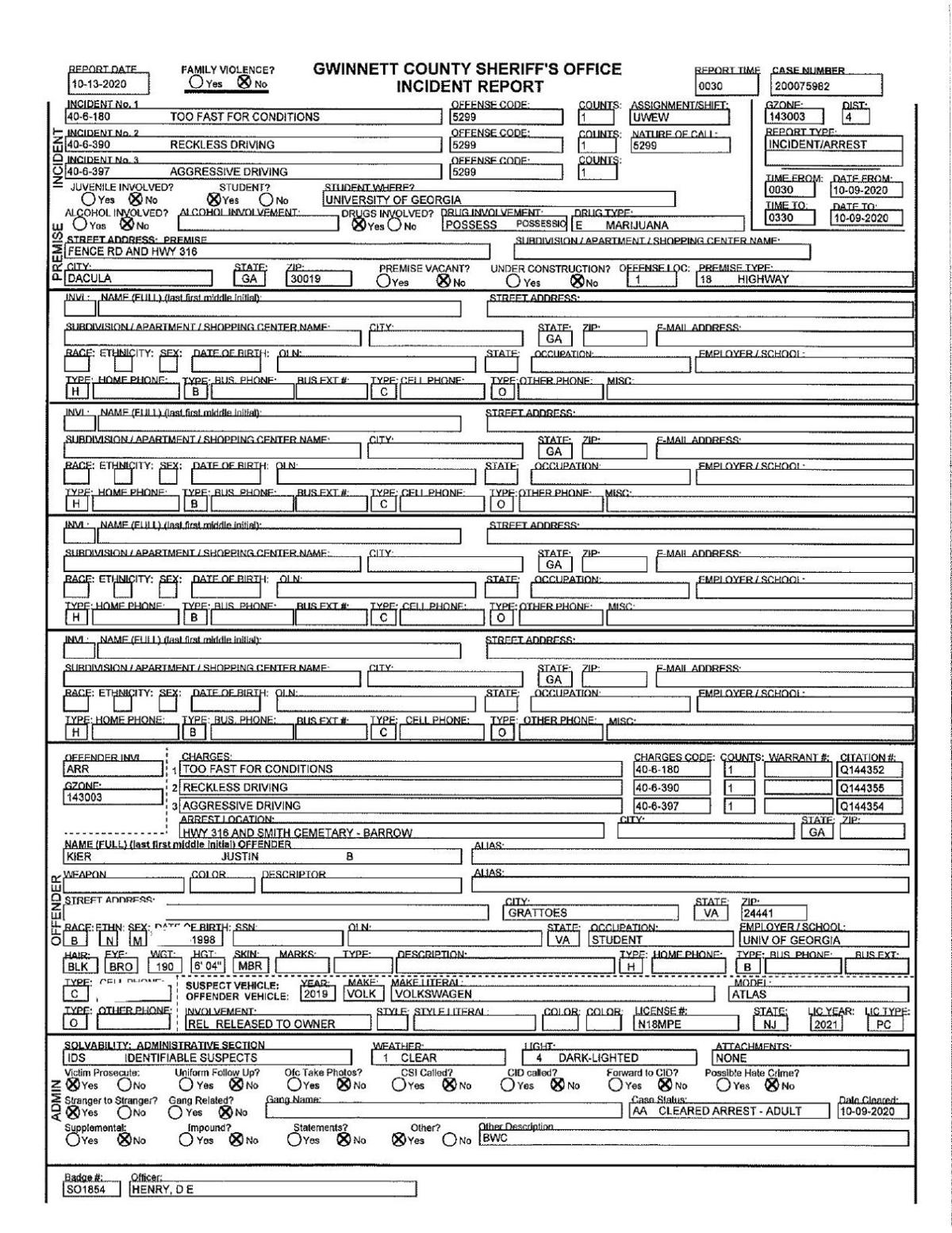 “I witnessed the black SUV overtake vehicles while entering the emergency lane, utilizing the grass shoulder and once again enter the left lane of travel while maintaining a speed above 85 mph.”

After the SUV crossed into Barrow County, sheriff’s deputies from that county joined the pursuit and helped stop the vehicle at SR 316 and Smith Cemetery.

“A search was performed by Barrow County deputies,” the report states. “Multiple ‘Roaches’ of marijuana were found in the vehicle. Due to the nature of the traffic stop and myself and Barrow County deputies, we felt it necessary to contact UGA athletics department and notify them we had three of their men’s basketball players detained and one men’s basketball player under arrest.”

Deputies contacted UGA Director of Operations for Men’s Basketball Heather McCormick and Assistant Basketball Coach Jake Thelen about the incident, according to the arrest report.

No charges were filed for the marijuana possession, according to the report.

“Barrow County did not want to arrest on the misdemeanor amount of marijuana and felt it better to release the individuals to the assistant coach who was then inbound to get his players and the female,” Henry wrote in the report.

Kier is a Grottoes, Va. native who was a three-year starter at George Mason from 2016-2019, but he missed most of the 2019-2020 season after he suffered a stress fracture in his right foot.

“The report is disappointing and not reflective of the standards we expect for our basketball program,” Crean said. “In addition to University disciplinary processes, we are addressing the incident internally according to Athletic Association policies. I’m hopeful these measures will result in both lessons learned and better choices in the future.”

"handling internally" code for well he's an athlete and can help win games, we will find some sure win game suspend him for it and make it seem we did something. Not kicked out of school or suspend for year, that would make him look like a criminal . ...Uh yeah he is ! but different rules for UGA athletes, how many arrested in last 5-10 years? Somewhere near 100

A police shooting delayed this Black college's graduation in 1970. Now, those students finally got their ceremony -- and an apology