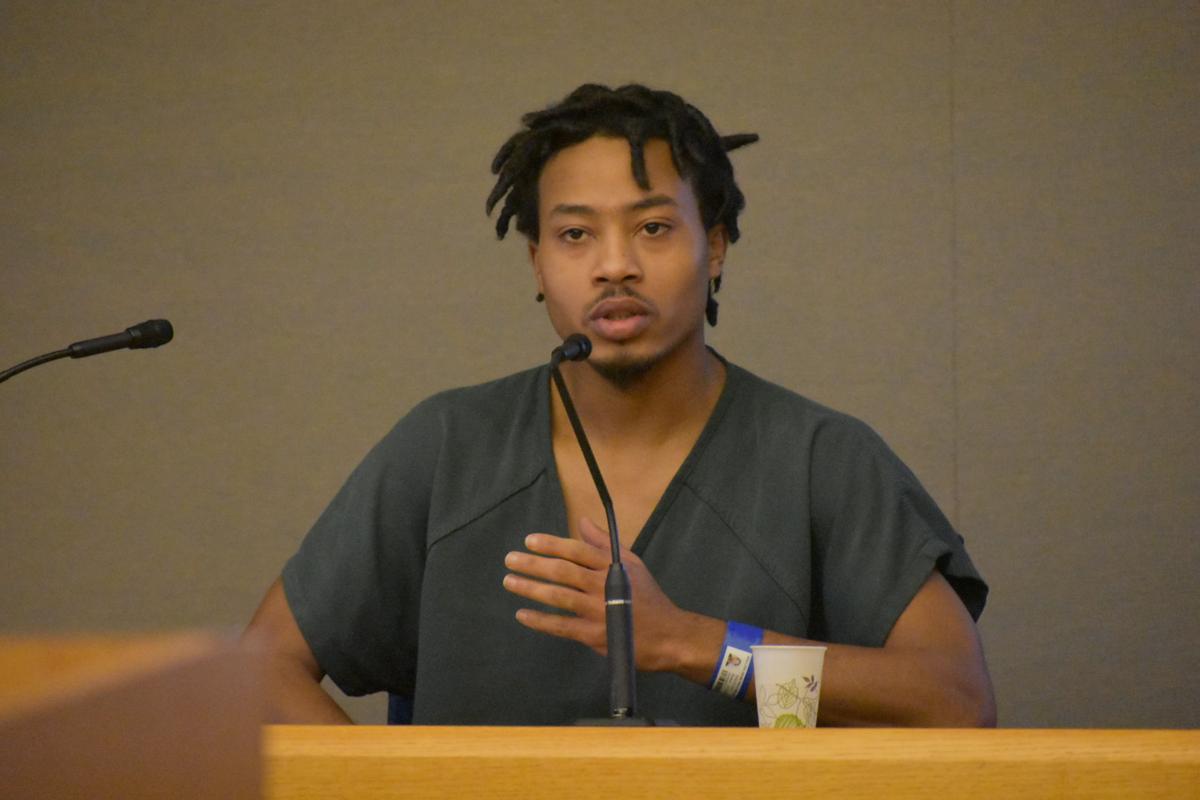 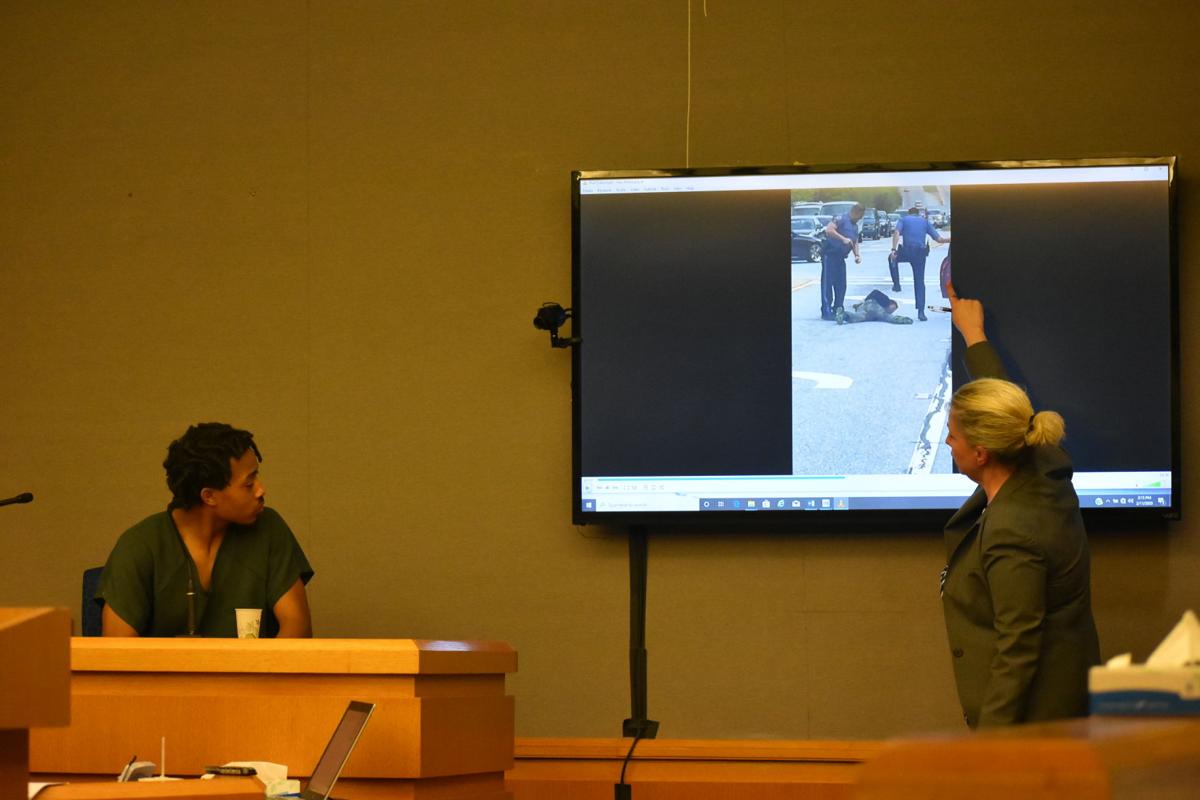 Demetrius Hollins watches video of the traffic stop in April 2017 in which he was allegedly beaten by two Gwinnett police officers. 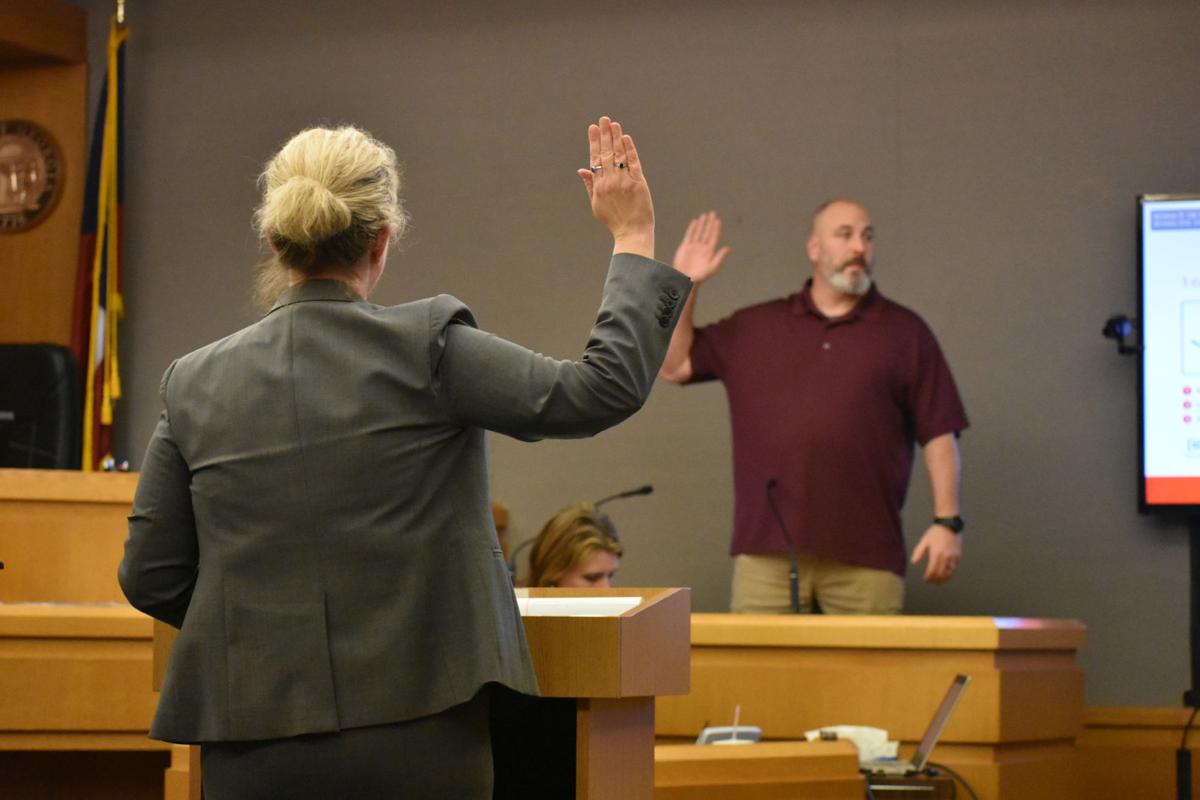 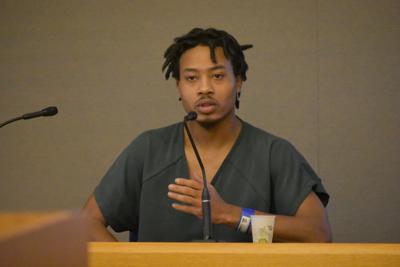 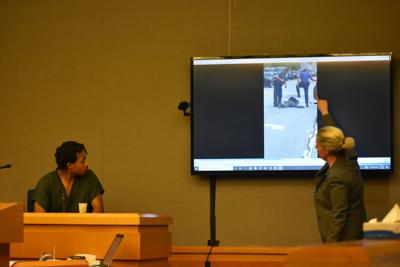 Demetrius Hollins watches video of the traffic stop in April 2017 in which he was allegedly beaten by two Gwinnett police officers.

Prior to former Sgt. Michael Bongiovanni testifying against his former partner at the Gwinnett County Police Department, Demetrius Hollins took a deep breath, closed his eyes and said that “this is the day I’m probably going to die” went through his head during his encounter with the two officers in 2017.

Bongiovanni and former Gwinnett County police officer Robert McDonald, who is on trial this week, allegedly beat Hollins, 21 at the time, during a traffic stop on April 12, 2017. The police officers were fired after the incident and indicted in February 2018. But McDonald has maintained his innocence.

Bongiovanni, who took a plea deal last year, testified on Tuesday, admitting that he saw McDonald “deliver a downward strike near the shoulder area of the suspect with his foot.” He said that Hollins was not actively resisting after being handcuffed when McDonald arrived at the scene.

“I was looking at the second officer because I thought he was actually going to help me from the first officer, you know, save me from getting tased and beat up,” Hollins said he was thinking as he watched McDonald approach the scene.

Instead, when McDonald arrived, Hollins said the officer kicked his head, put his knee on the back of his head, pointed his gun to his right temple and said he was going to “shoot me and splat my brains all over the street if I moved. So I didn’t move.”

Bongiovanni later testified that McDonald only told Hollins to not move “and that was it.” Hollins said that as he lay on the road face down, he yelled out, “I’m complying, I’m not resisting.”

However, Bongiovanni said he had told McDonald he had a “gut feeling” he recognized Hollins from a previous encounter.

“It was based on him screaming for his mom, mommy, mom,” Bongiovanni said. “I remembered dealing with a suspect earlier that – I think I told McDonald – I think he had a gun where he ran from me.

“I wasn’t exactly sure. I didn’t know his name, but it was a gut feeling that I had dealt with him before based on the very unique statements that the suspect was making in both situations.”

But a gun was never found when the incident occurred in April 2017, and Bongiovanni never said anything on his radio about recognizing the suspect.

Prosecutor Charissa Henrich also questioned Bongiovanni about his and McDonald’s reports of the incident, as they were later frozen so that they could not be altered since inconsistencies had been found.

Additionally, Bongiovanni had failed to report that as Hollins had his hands up, he hit the man in the face and that McDonald allegedly ran up to the men with his gun drawn, stomped Hollins in the head and then put his gun to Hollins’ head.

“What I told him to do was write his report, write his use of force, and I wanted to afford him the opportunity to explain what he did,” Bongiovanni said. “That’s policy in our police department. At the end of the night, after it was sent to me electronically, I did review it and sent it through the chain of command. I read it one time.”

Meanwhile, Hollins said the injuries he sustained during the incident included a busted lip and a cut on his nose, and that they only occurred after McDonald kicked him on the head.

His injuries took two months to heal and also included back spasms from being tased six or seven times, Hollins said.

Hollins notably walked into the courtroom on Tuesday wearing a green Gwinnett County Jail jumpsuit. He was charged in 2019 for aggravated stalking, criminal trespass, willful obstruction of law enforcement officers, probation violation and a series of other charges.

The attorney questioned him about incidents that occurred as far back as 2016. Britt also got Hollins to admit to hiring a lawyer to demand $1 million from Gwinnett County after the incident in April 2017.

Henrich objected submitting that as evidence, saying she didn’t believe it was relevant to the case. Britt, however, argued that it was relevant because it showed Hollins’ bias and interest in the case.

In June 2019, Bongiovanni pleaded no contest to aggravated assault and battery and reached a plea deal so that he would spend six months in Gwinnett’s work-release program, five months home confinement and the rest of his 10-year sentence on probation instead of jail time if he testified against McDonald.

McDonald is facing aggravated assault and battery charges, as well as a felony violation of oath by public officer charge. If convicted on all three charges, he could face a maximum sentence of 26 years in prison.

On Tuesday, Bongiovanni said he took the plea deal because it was in the “best interest of my family.” He also said that, at the time of the incident, he had served as a sergeant for almost 10 years and had received awards for good service.

He had also worked as McDonald’s direct supervisor for about a year-and-a-half to two years prior to April 2017.

The trial will resume at 9 a.m. Wednesday.

In 2016, Hollins was arrested when he was stopped by police and found with a loaded .380 pistol. He was underage for carrying the pistol. Since his arrest in this particular case, he was again arrested for beating and robbing a former girlfriend. So contrary to common knowledge, Hollins is not an ex-altar boy who helps grandmothers cross the street.

'The Proud Family' revived by Disney+

Bob Iger was more than Steve Jobs' friend: He was legacy media's most tech-savvy CEO