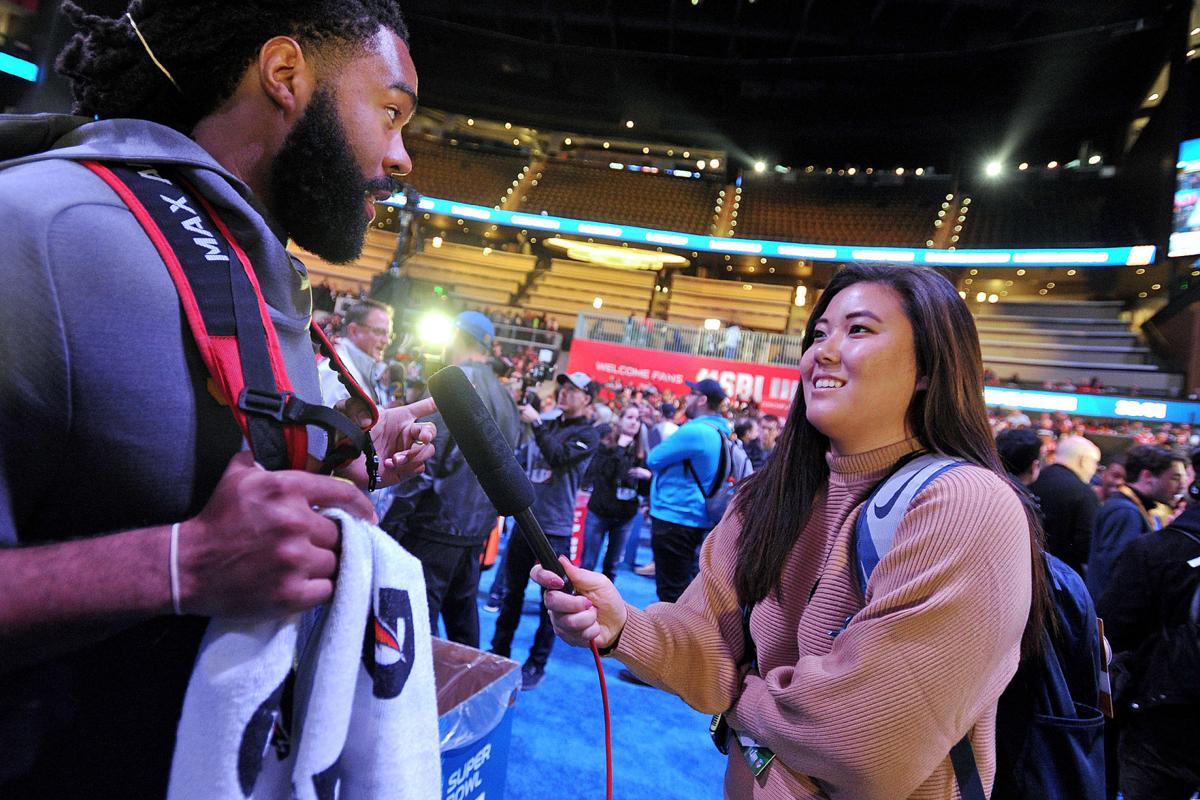 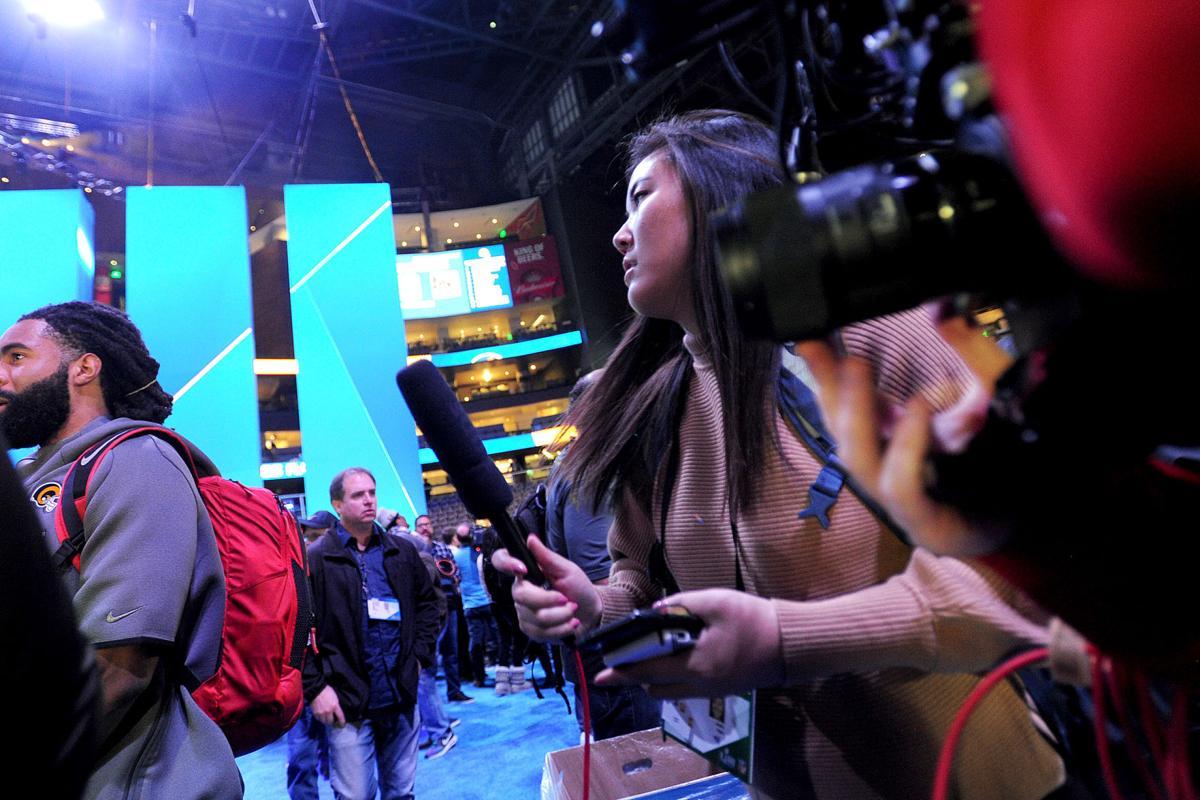 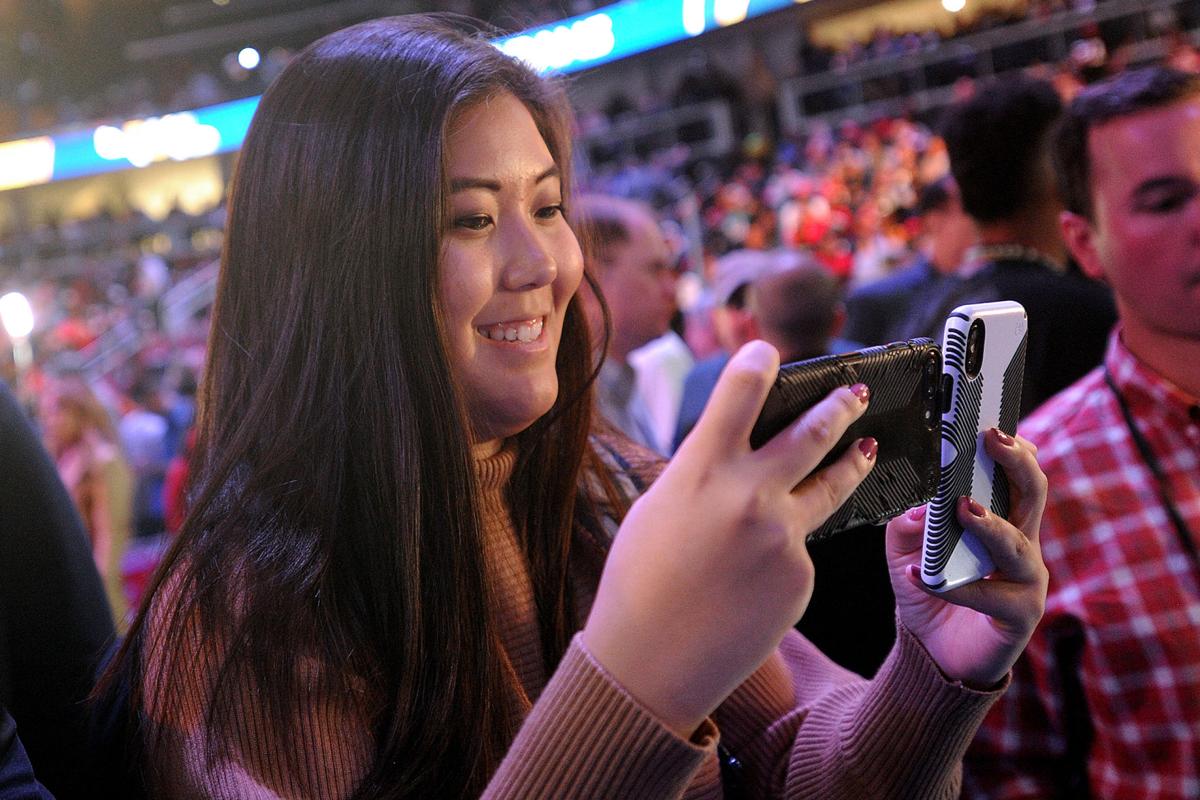 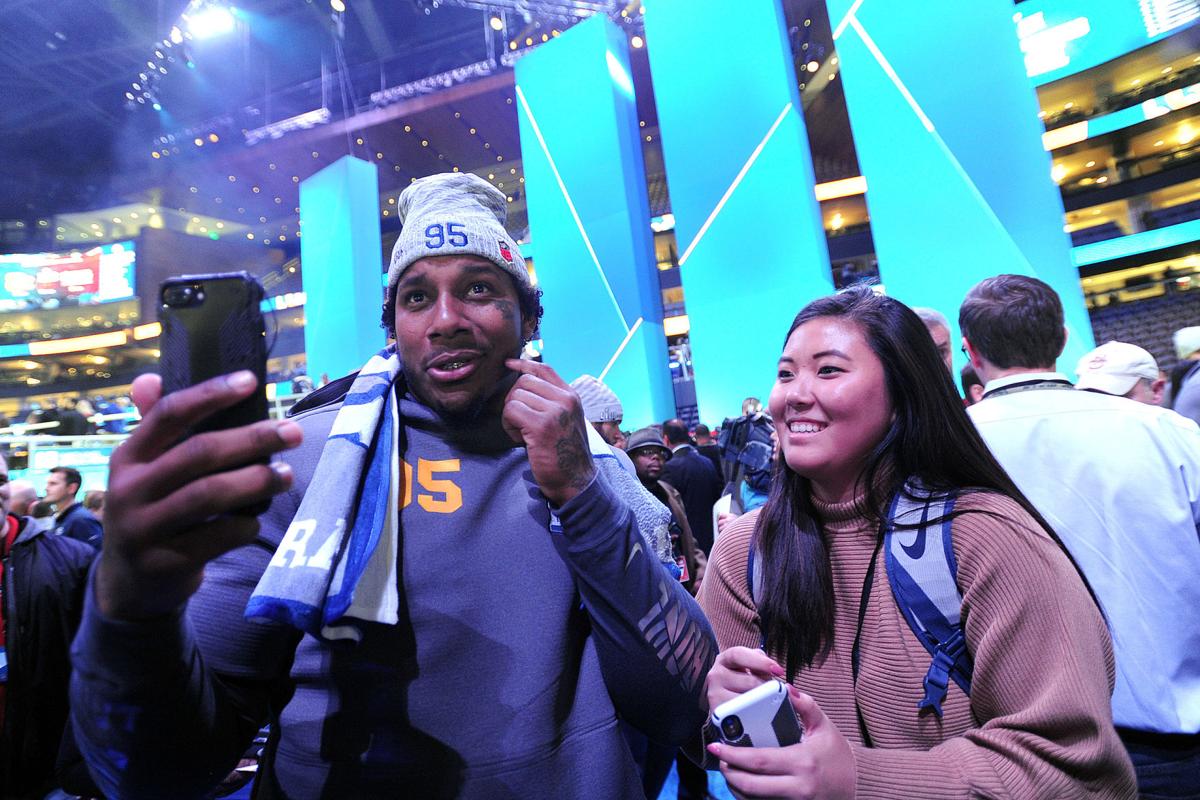 Jamie Han, a communications staff member with the Los Angeles Rams, has a laugh with Ethan Westbrooks as he posts to social media during Super Bowl LIII Opening Night at State Farm Arena in Atlanta. (Staff Photo: Jason Braverman) 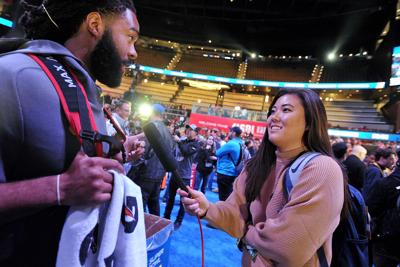 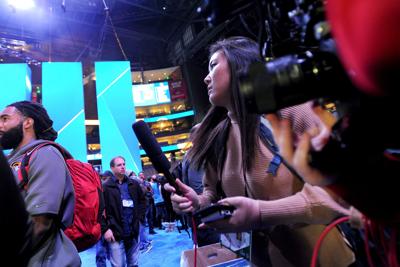 Jamie Han, a communications staff member with the Los Angeles Rams, has a laugh with Ethan Westbrooks as he posts to social media during Super Bowl LIII Opening Night at State Farm Arena in Atlanta. (Staff Photo: Jason Braverman)

Ask Jamie Han if she was a high school athlete at Peachtree Ridge, and she quickly comes clean.

That spirit guided her to sporting events. She was a basketball cheerleader as a high school senior, but more often was an avid fan.

Han, a 2012 Peachtree Ridge grad, found another way to back her Lions in 2011 when she created the @Ridgeathletics Twitter account, which spread news — like game schedules, bring canned goods to school, etc. — to The Tribe, the student body. Largely because of that account, Peachtree Ridge had one of the bigger digital presences among state high schools. She didn’t realize it at the time, but the venture also launched her career.

Nearly eight years after she started the student section account, Han is the Los Angeles Rams’ social media specialist. She runs the NFL team’s accounts as part of a larger media team that includes writers, an on-camera reporter and video editors.

Her workplace this week is more special than some of her colleagues because Super Bowl LIII brings her home.

“It feels like I’ve come full circle,” Han said. “I know it sounds cliché and I’m only two years out of college, but it almost feels full circle in my very short professional career. I started that Twitter account in high school, went to (the University of) Georgia and ramped up my resumé. It’s just cool that the journey goes to the pinnacle of the greatest team sport, I get to live that out in my hometown. I’m making a list of restaurants for people to go to around our hotel.

“It’s very cool to me, my high school, my college and now I get to potentially be with a team that wins the Super Bowl in Atlanta. I could not have asked for the stars to align more.”

After high school, Han studied digital and broadcast journalism at UGA’s Grady School of Journalism and Mass Communication, and also earned its Sports Media Certificate. During college, she worked in the Bulldogs’ athletic department in various roles and did an internship with the CW that had her in Flowery Branch regularly for Atlanta Falcons events. She handled social media for two years for the U.S. Army All-American Bowl in San Antonio, helped with the SEC Network in Charlotte and also completed a two-month internship with the Seattle Seahawks that propelled her into her current NFL role, which she started in May, 2017.

Her career arc isn’t a surprise to Jon Weyher, Gwinnett County Public Schools’ director of athletics, activities and community schools. Weyher was athletic director at Peachtree Ridge when Han was a student, and he relied on her to get messages out to the community.

“Jamie stood out because she was a natural leader amongst her peers and always made decisions that were best for the school,” Weyher said. “Jamie was special because she connected with all student groups and they respected her because of her maturity, thoughtfulness and leadership. I had no doubt Jamie would be successful at whatever endeavor she encountered. I’m so proud of her and even though I am a New England fan wish her and her team the best.”

Han and the other members of her media team have been busy leading up to Sunday’s game, funneling content to the Rams’ large social media community, including 822,000-plus Twitter followers, 747,000-plus Instagram followers and 849,000-plus Facebook followers. The opportunity to share the experience is the ideal finish for the team, which also guided its fans through a hectic season that include a horrific mass shooting near its training complex, tragic California wildfires and the relocation of a game from Mexico City to Los Angeles.

“That’s the proudest thing we’ve done as a team,” Han said. “We were in Colorado Springs training for altitude (in Mexico City) and we had five days to put together the first Monday Night Football in LA in like 30, 40 years. There were a lot of moving parts. The community relations department wasn’t sleeping, making sure get thousands of first responders got there, that people were able to get to the game, sell out 75,000 tickets. The game as a whole stands out. The week was rough for the community. We had the fires, the Borderline (bar) shooting the week we went to Colorado Springs to prepare for Mexico.

“We invited victims of the shooting and first responders to the game. One photo I posted was of three gentlemen from the Ventura County Sheriff and Fire Department, and the California Highway Patrol. They ran the team out together, all three holding American flags running the team out on the field. It was so powerful to post. Other victims’ families were on the field before the game. (Rams players) Jared Goff, Andrew Whitworth, the captains after the greatest Monday Night Football game in history (a 54-51 Rams win over the Chiefs) went around and hugged the victims’ families. Just be there to record it, and I got to post that, was special. Yes, we won this amazing game, but we’re about the community. We rallied around the community and it was for them. The theme that week was LA together. So to just randomly have the game moved back to LA from Mexico and for that one night, people kind of forgot (the tragedies). A lot of first responders said they found joy that week.”

To finish such a roller-coaster season close to home has been special for all the Rams with local ties, including head coach and Marist grad Sean McVay, who bonded with Han over their common roots. His homecoming trip has been more public than a behind-the-scenes staffer like Han, but it is no less fun.

Her trip will feature her first visit inside Mercedes-Benz Stadium, along with a trip to State Farm Arena, which she didn’t know had been renamed from Philips Arena. And at the top of her list was a stop for Mexican food near where she grew up.

“I’ve got to hit up Frontera on Sugarloaf Parkway at some point,” Han said.

She announced her planned visit there, fittingly, with a cheese dip and chip photo on Twitter, captioned, “hello, I’ve missed you.”

While she misses plenty about her home, she also enjoys her new life and career in Los Angeles.

“It’s been an amazing experience so far (with the Rams),” Han said. “I think the coolest part, not to be cliché, but being part of something bigger than you. Working with the football side, the front office, everyone. There are so many things that go on with being on part of a team like that. I think it’s so much fun.”