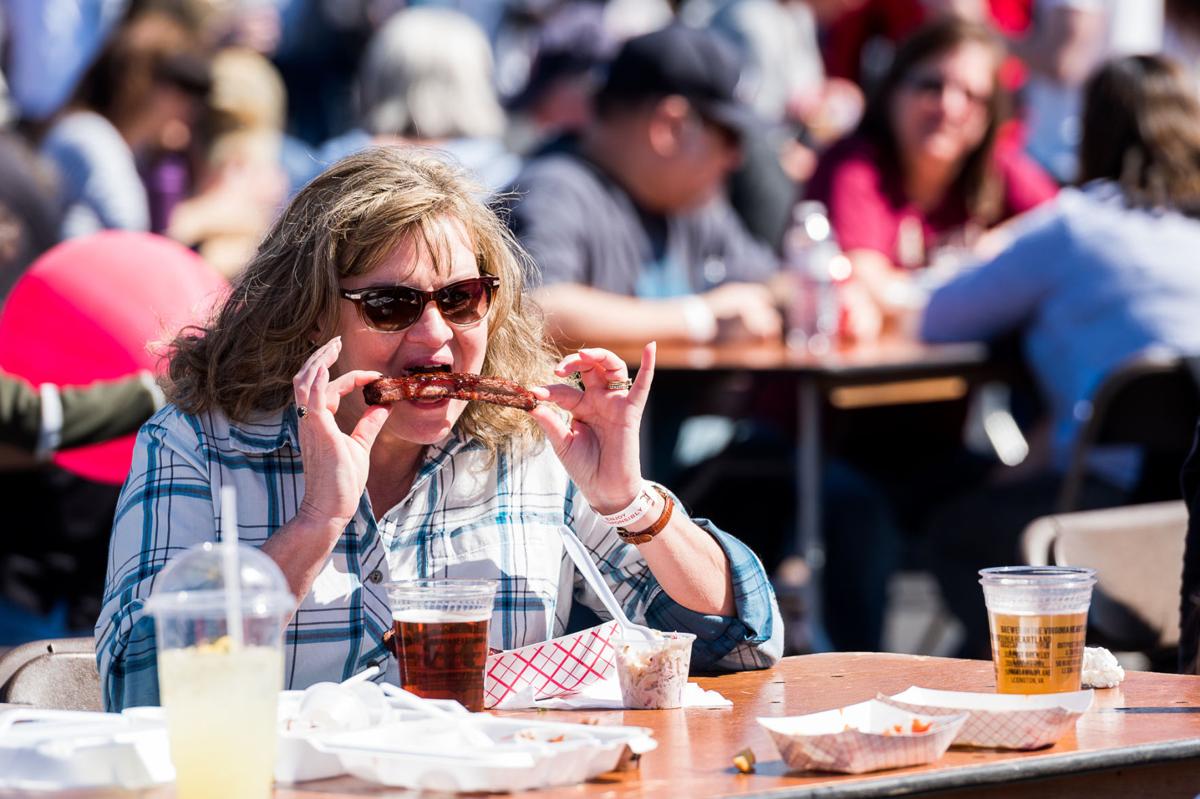 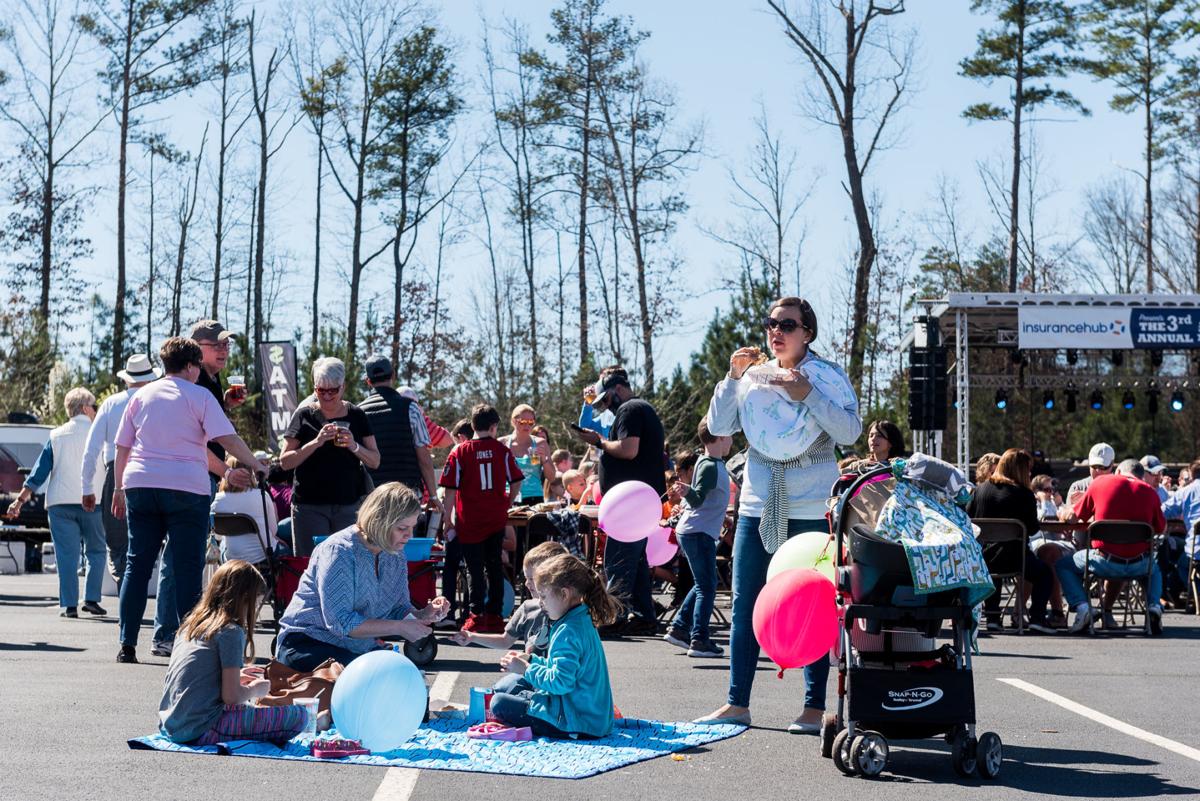 Becky Beach, left, and Katie Beach eat with part of their family at Saturday’s third annual Sip and Swine BBQ Festival at Coolray Field in Lawrenceville. 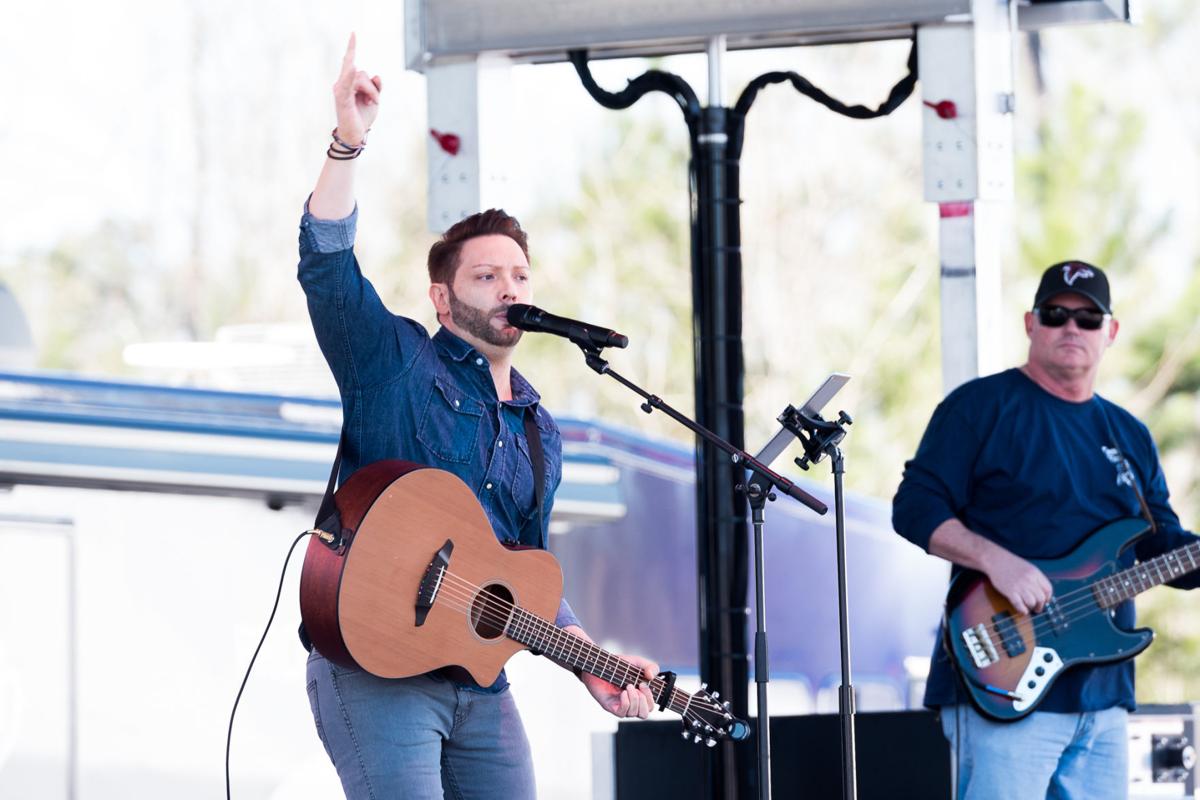 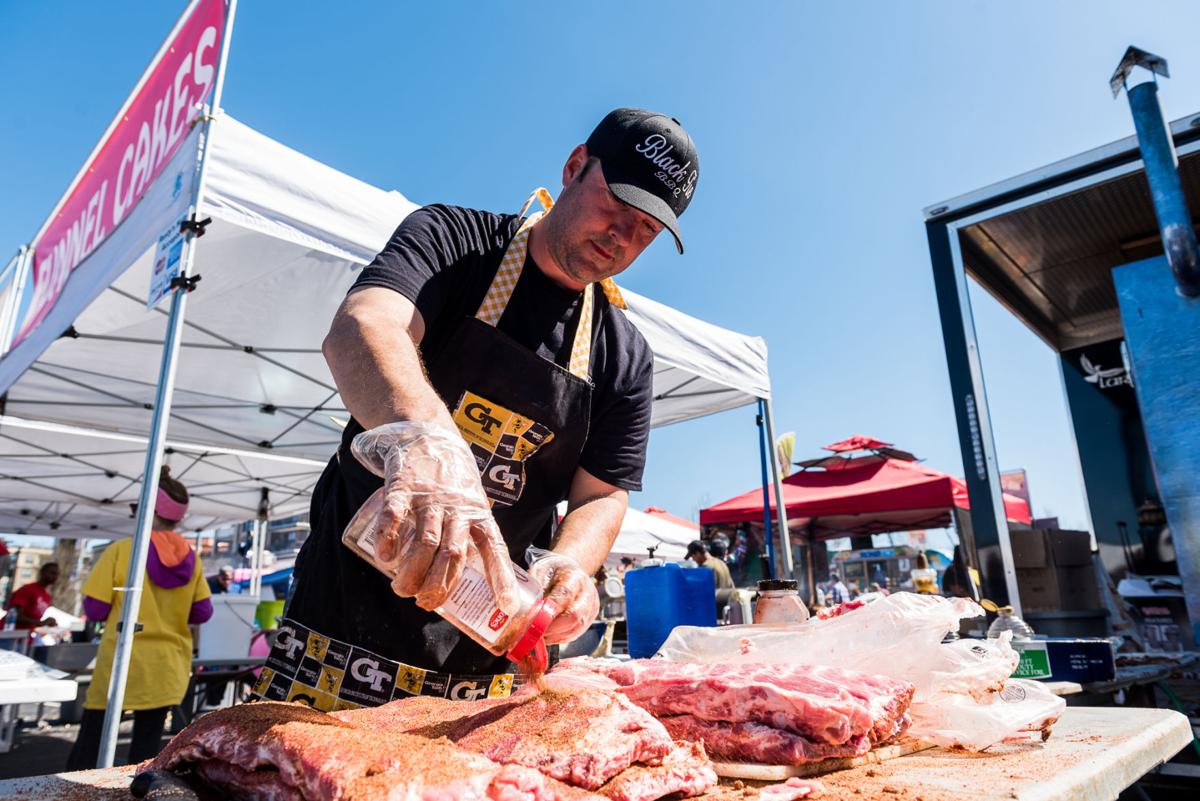 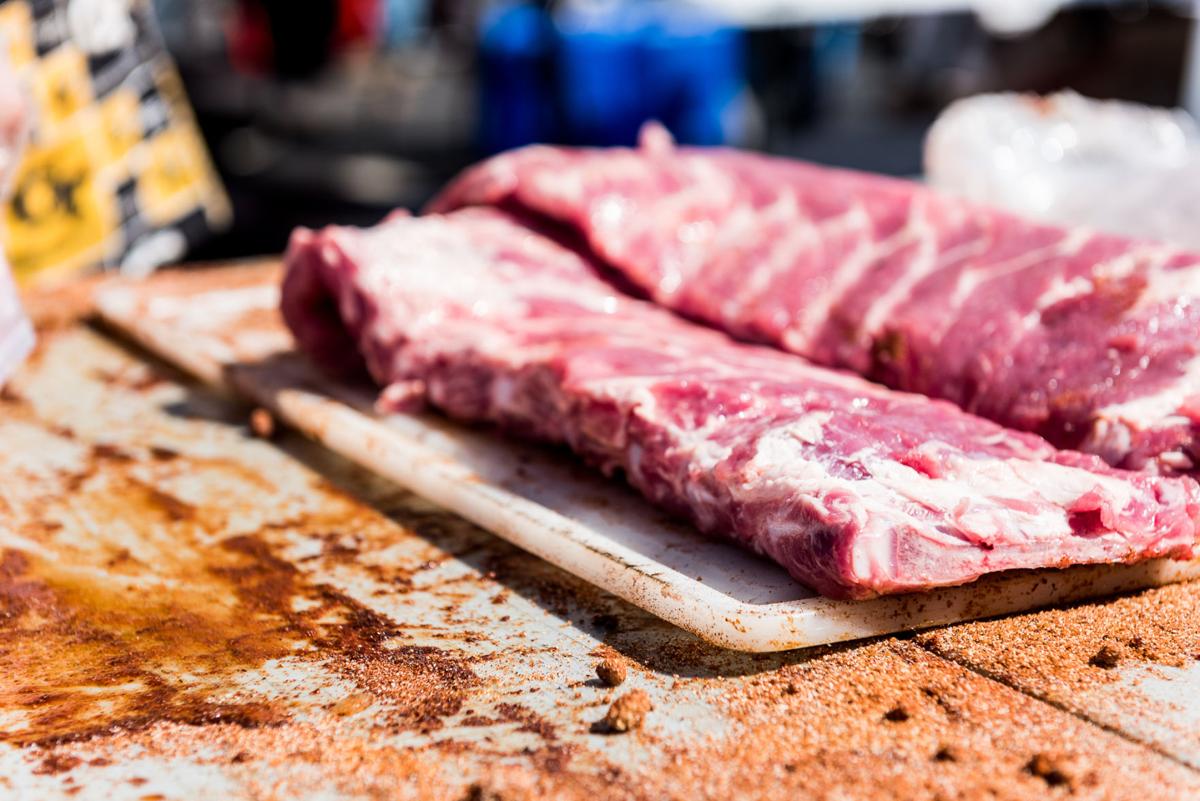 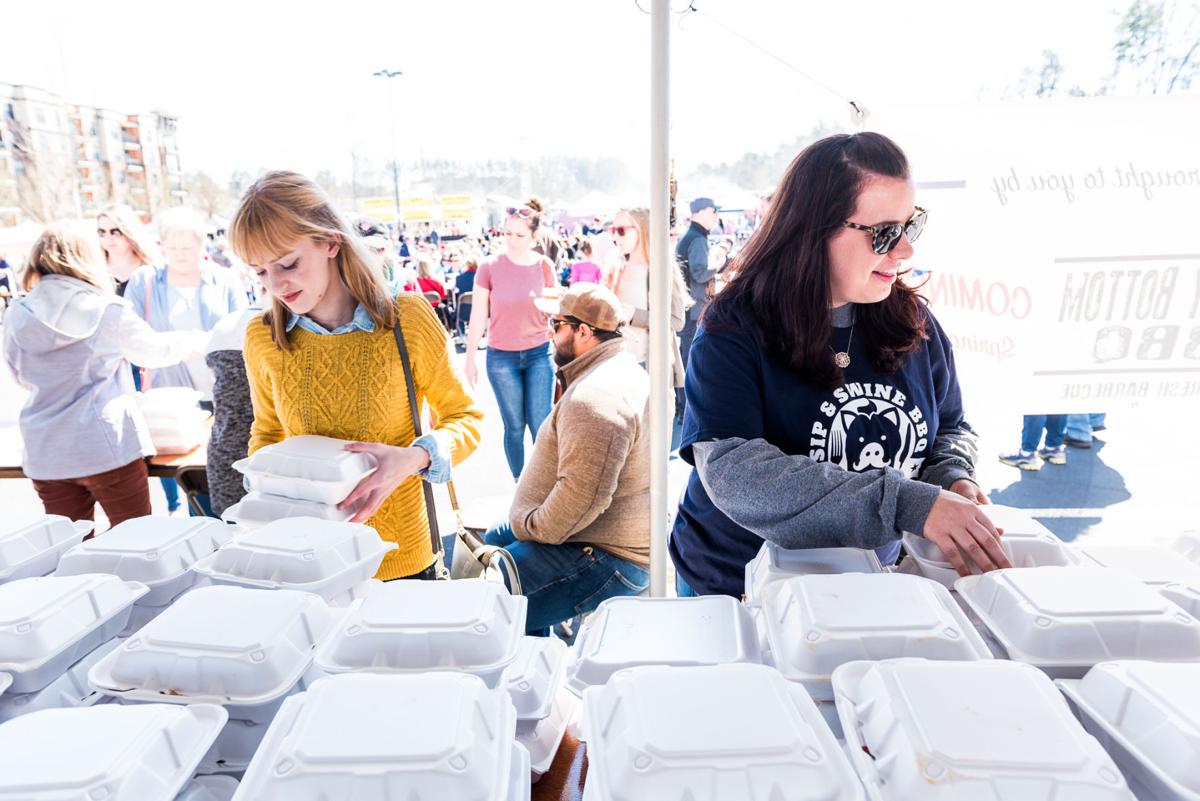 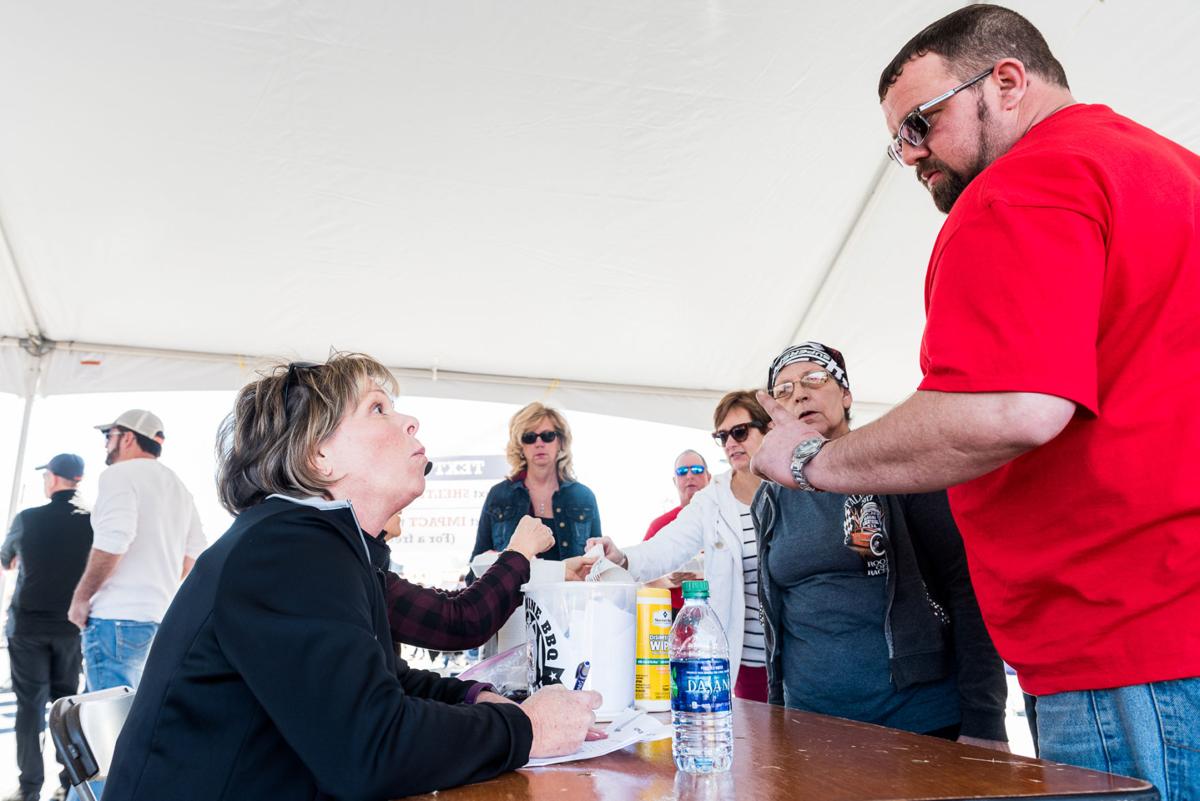 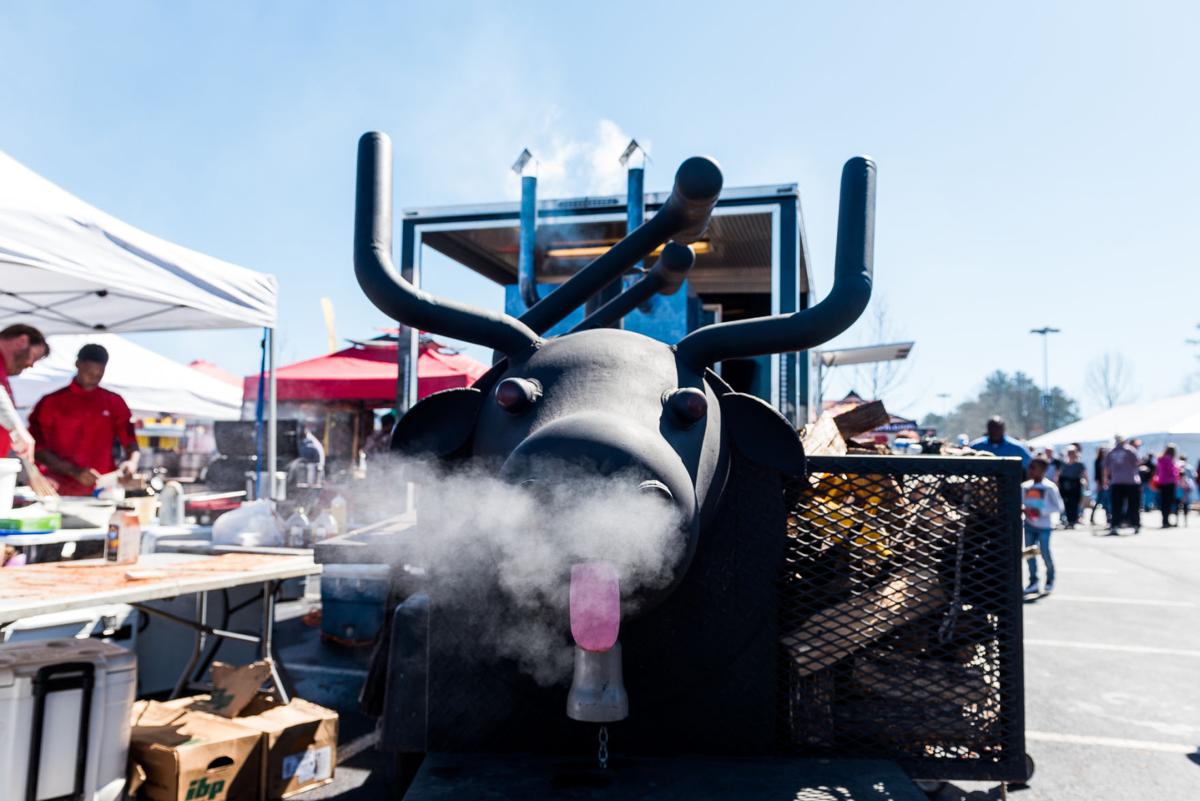 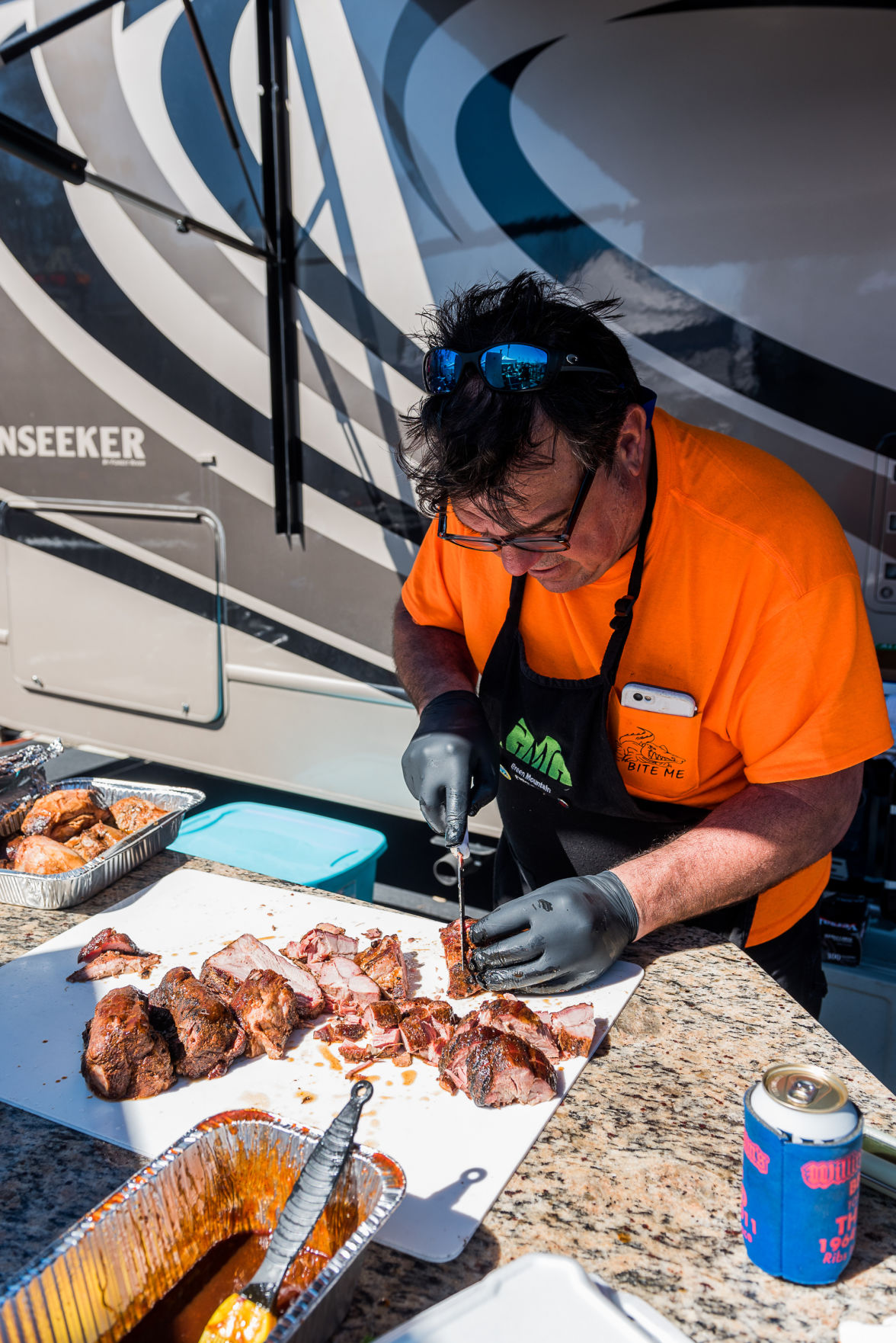 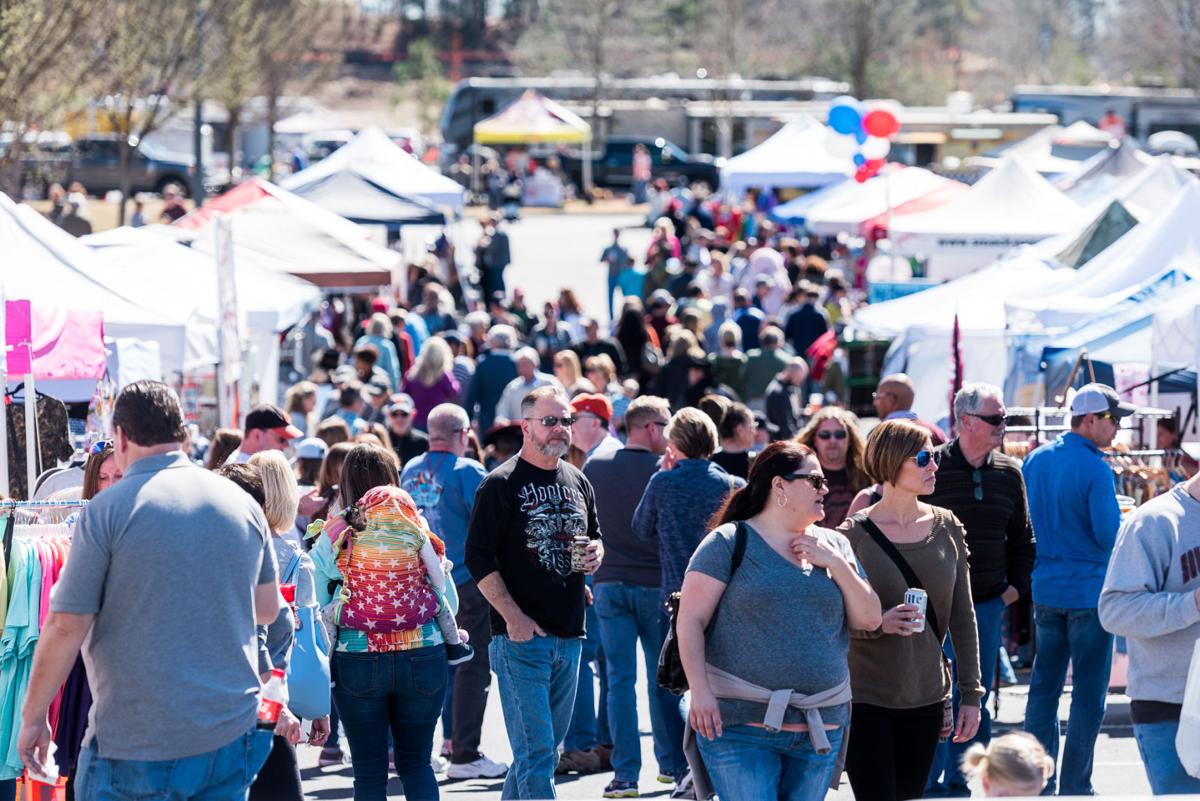 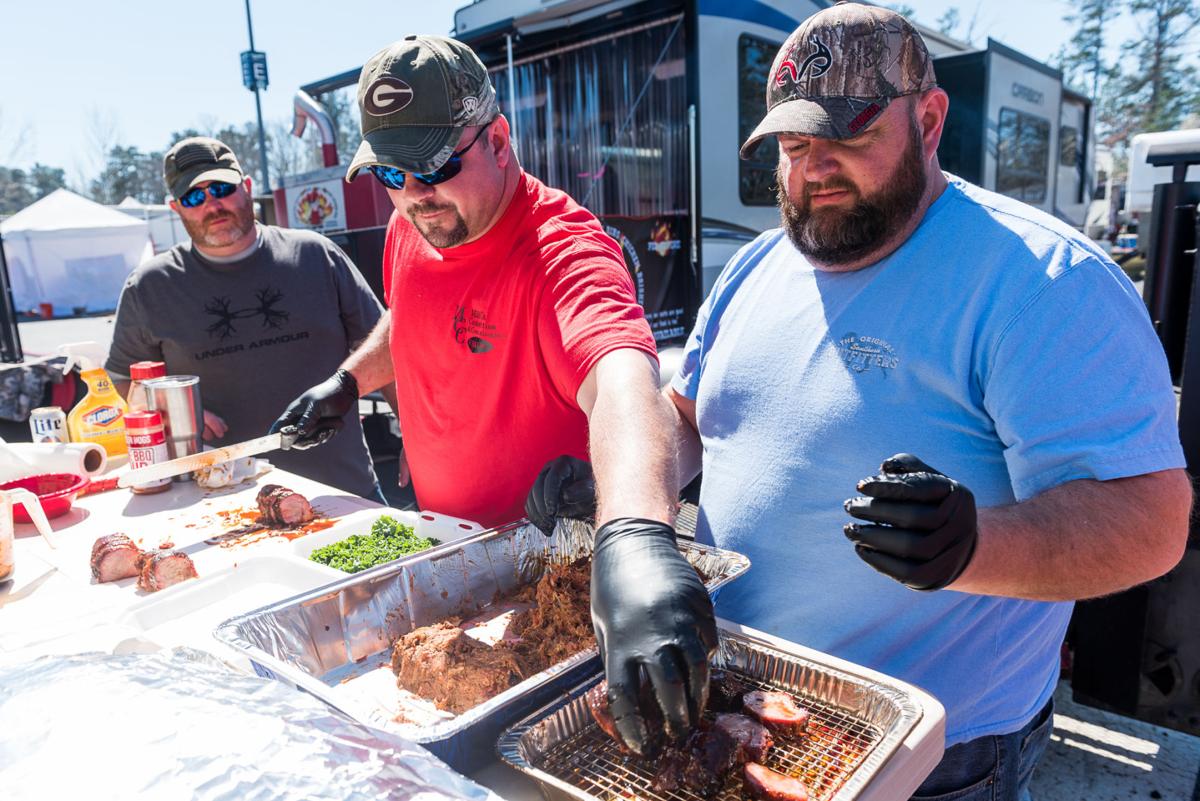 Shane Foster, from left, Erik Adams and Rusty Maddox of Hog Mountain Barbecue based in Dacula prepare barbecue at Saturdayճ third annual Sip & Swine BBQ Festival at Coolray Field in Lawrenceville. (Photo: Cory Hancock) The three, along with Anthony Nicely (not pictured), have known each other for more than 20 years. 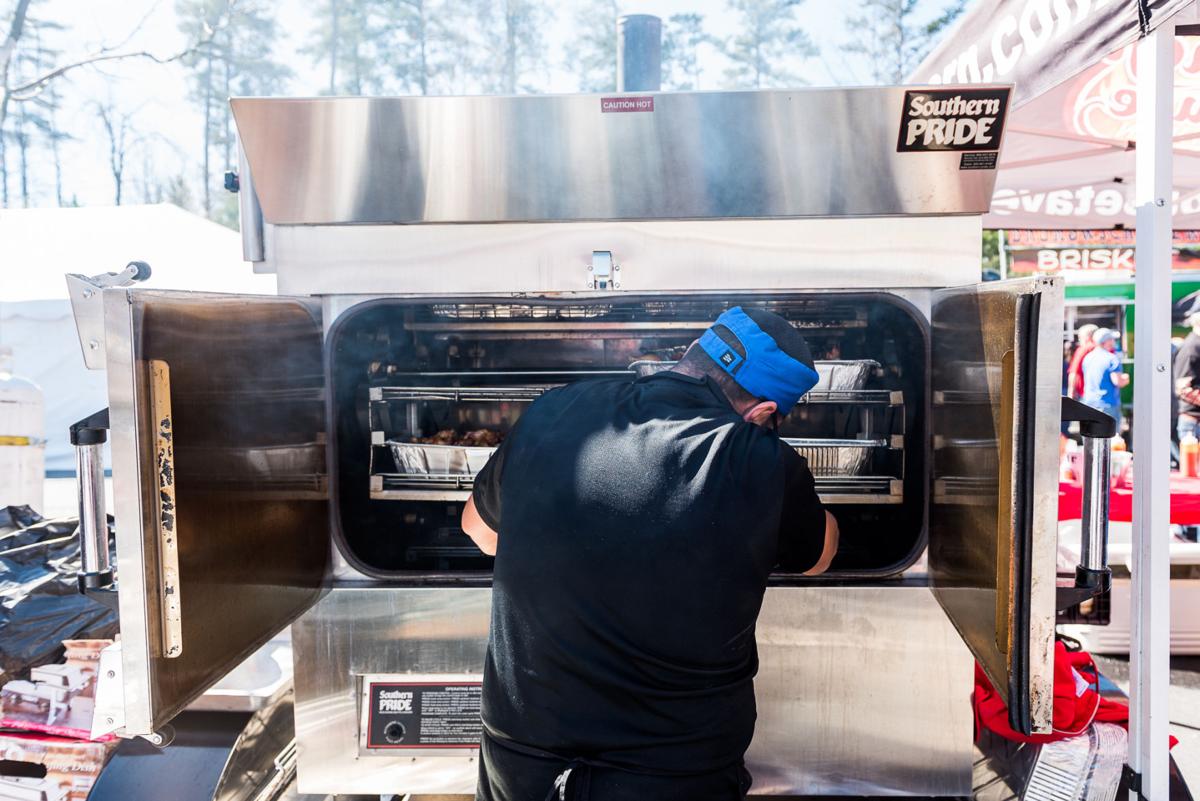 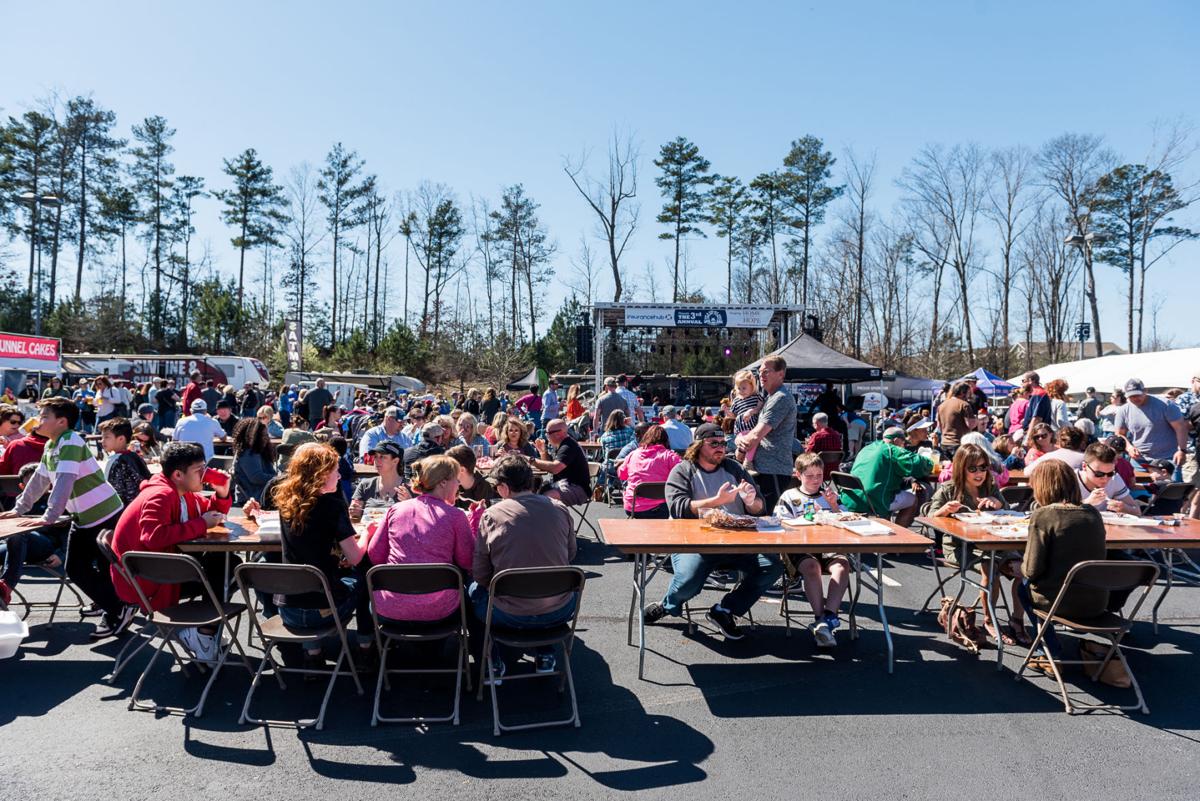 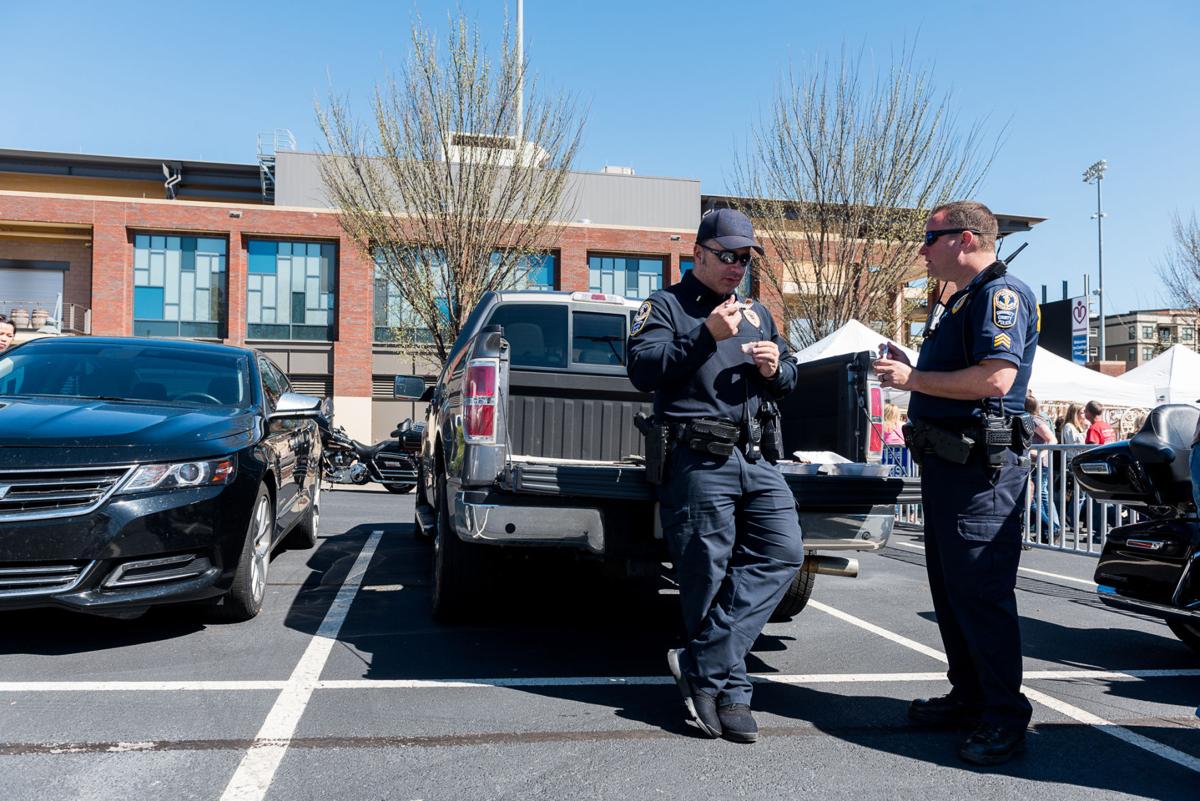 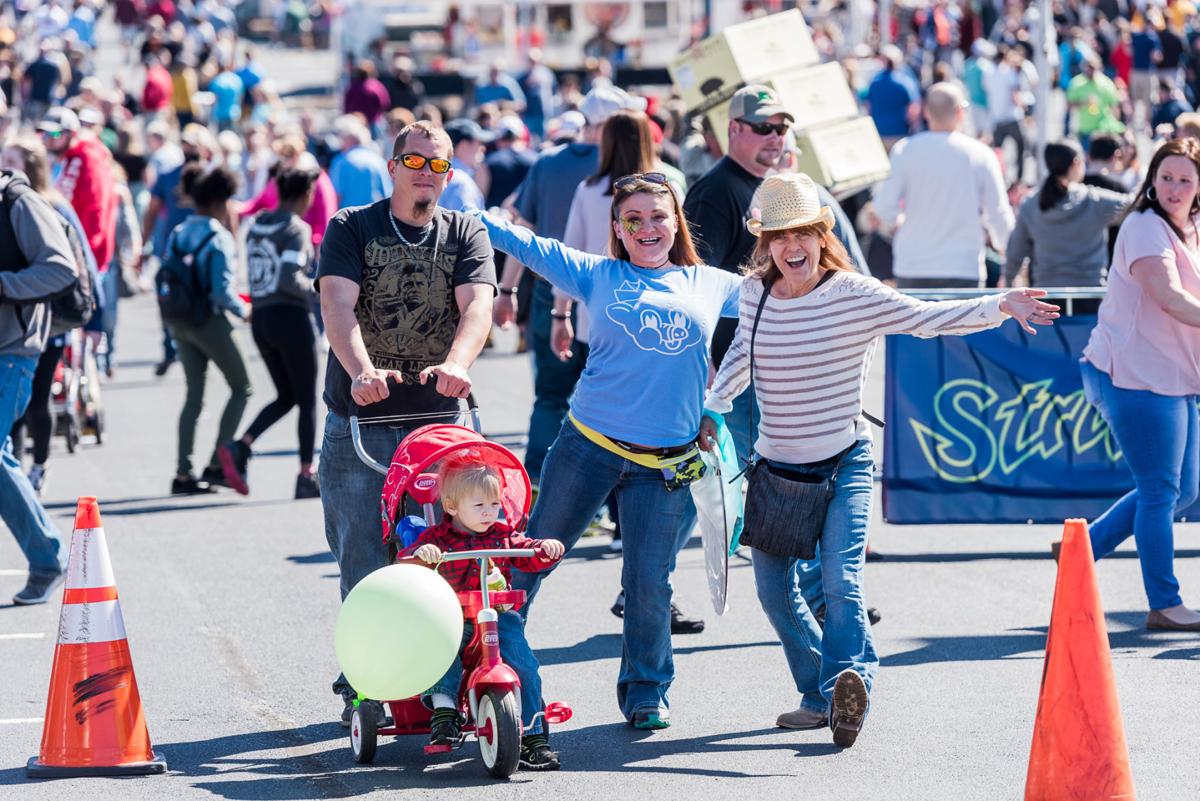 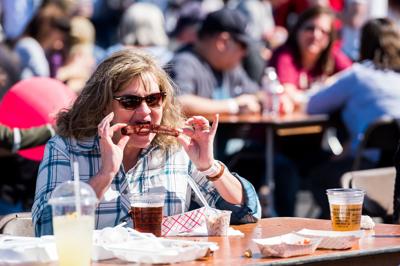 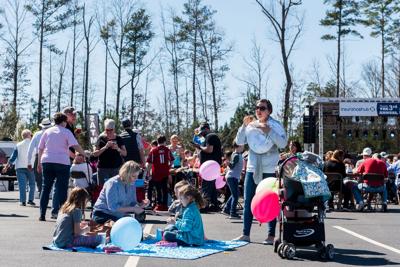 Becky Beach, left, and Katie Beach eat with part of their family at Saturday’s third annual Sip and Swine BBQ Festival at Coolray Field in Lawrenceville.

Shane Foster, from left, Erik Adams and Rusty Maddox of Hog Mountain Barbecue based in Dacula prepare barbecue at Saturdayճ third annual Sip & Swine BBQ Festival at Coolray Field in Lawrenceville. (Photo: Cory Hancock) The three, along with Anthony Nicely (not pictured), have known each other for more than 20 years.

“Two minutes,” a judge yelled to contestants as they raced to the barbecue tent, Styrofoam boxes of steaming brisket filling the air around Coolray Field with a smoky aroma.

“This are the last turn-ins for brisket,” said Jim Lloyd, president of InsuranceHub, the Grand Champion Sponsor of the Sip and Swine BBQ Festival. “We had teams from all over the country, and they’re lining up to turn in their last meat. They turned in four meats today — chicken, ribs, pork and brisket — which will be judged on appearance, taste and tenderness. The most important is tenderness.”

For the third year in a row, thousands of people from near and far descended Friday and Saturday on the Gwinnett Stripers’ home for good food, live musicians and, of course, the barbecue contest at the Sip and Swine BBQ Festival, an annual event that benefits the Home of Hope at Gwinnett Children’s Shelter.

A residential care facility that provides shelter to minors and their mothers, Home of Hope positions children and their moms for better futures by providing them with physical, emotional and educational support while helping them find permanent residences.

All of the proceeds from the festival go toward Home of Hope, which Lloyd said will likely win big this year, estimating that as of mid-afternoon Saturday, the event had already drawn a crowd of about 10,000 attendees.

He said about 85 teams participated in this year’s barbecue contest, 125 judges judged the competition, and dozens of volunteers helped make the festival its largest turnout yet.

Lloyd credits the large presence to social media — he said InsuranceHub really pushed the event online this year — as well as to the event’s cause.

“The last couple of years, our (vendors) have sold out it’s been so successful,” Lloyd said. “We’ve just been so blessed, and I think when you have a good cause and a good heart, people want to come out.”

“We’re here because we support Jim and Cindy and we’re friends with them, but also the cause is fantastic,” Cindy LaPlante said. “That’s really what we’re here for — and really good competition.”

Joe LaPlante laughed, remembering last year’s competition, in which he and his wife came in “dead-ass last,” or DAL, as Joe calls it.

Though this is their second year competing in the Sip and Swine competition, barbecue contests are not new to the LaPlantes.

“We started about eight years ago,” Cindy said. “We’re actually from up north — we’re damn Yankees — but when we moved down here, (Joe) just got into it.”

“We used to play paintball,” Joe said, interjecting. “The guy we play paintball with would do a charity (barbecue) event for the Boys Ranch of Georgia. Once you do that and you get it into your system a little bit, you’re already hooked. They just dangle the worm in front of you and bam, you’re in. So eight years later, we’re down here doing the (Kansas City Barbecue Society).”

The Sip and Swine BBQ Festival is a sanctioned barbecue competition by the Kansas City Barbecue Society — the world’s largest competitive barbecue organization, with more than 20,000 professional members who compete for points toward national and state championships.

The LaPlantes said this is their last KCBS event before they move on to a Georgia Barbecue Association competition.

“It’s just the comradery and it’s a big family,” said Cindy LaPlante. “We’re here for the love of it, and that’s what it’s all about.”

Laughing, a rival team member, and a good friend of the LaPlantes, Mike Gerardy, butted in.

“It’s the only sport where a fat bald guy can win,” he said. “But really, we do wish our friends well. A team will get called up for awards and everybody claps and hurrahs and it’s like no other sport you’ve ever seen. But we also say things like, ‘I hope I walk after you,’ because they go (highest placement) down — fifth, fourth, third.”

Tina Turner comes out of retirement with a remix of 'What's Love Got To Do With It?'