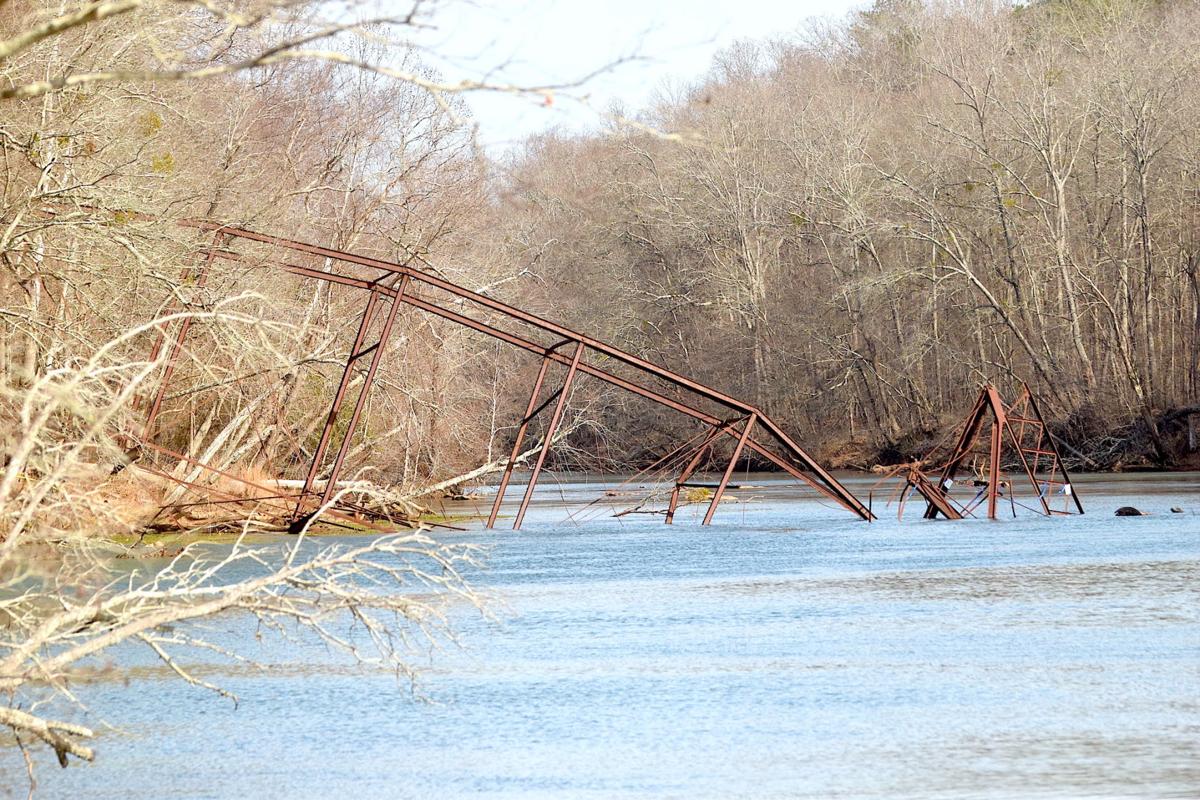 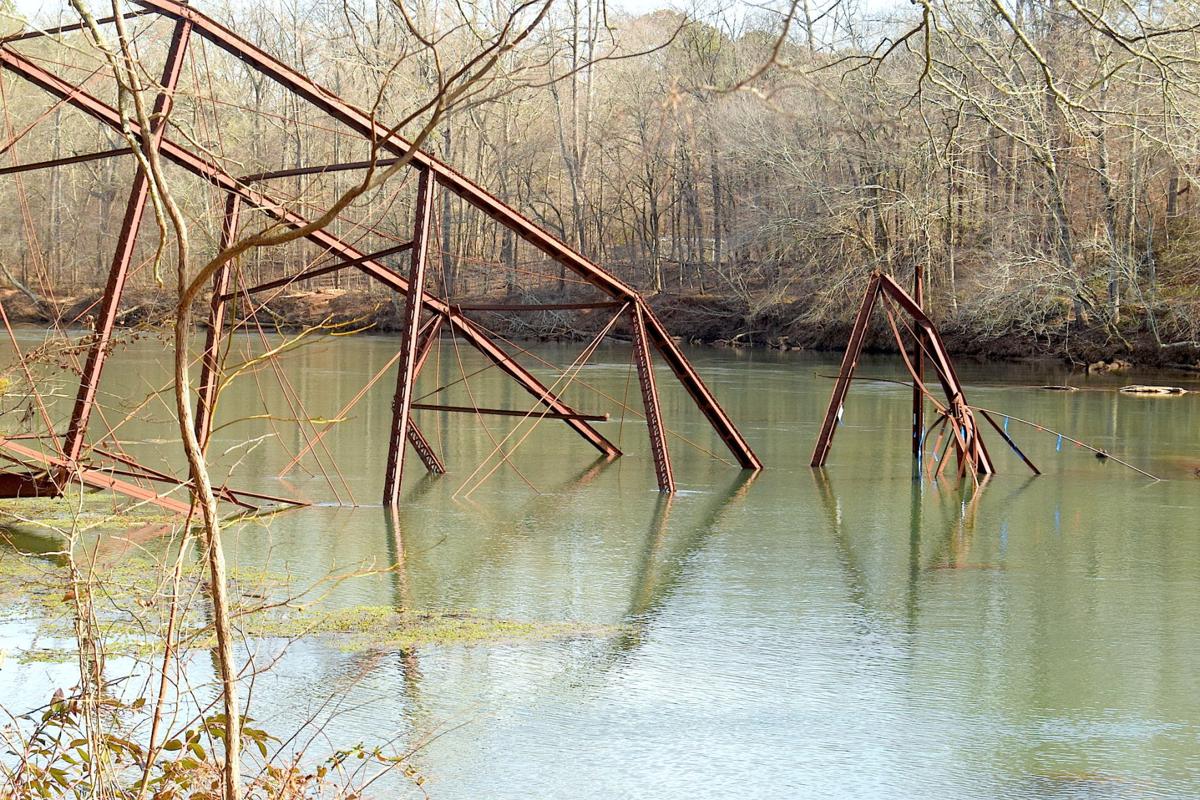 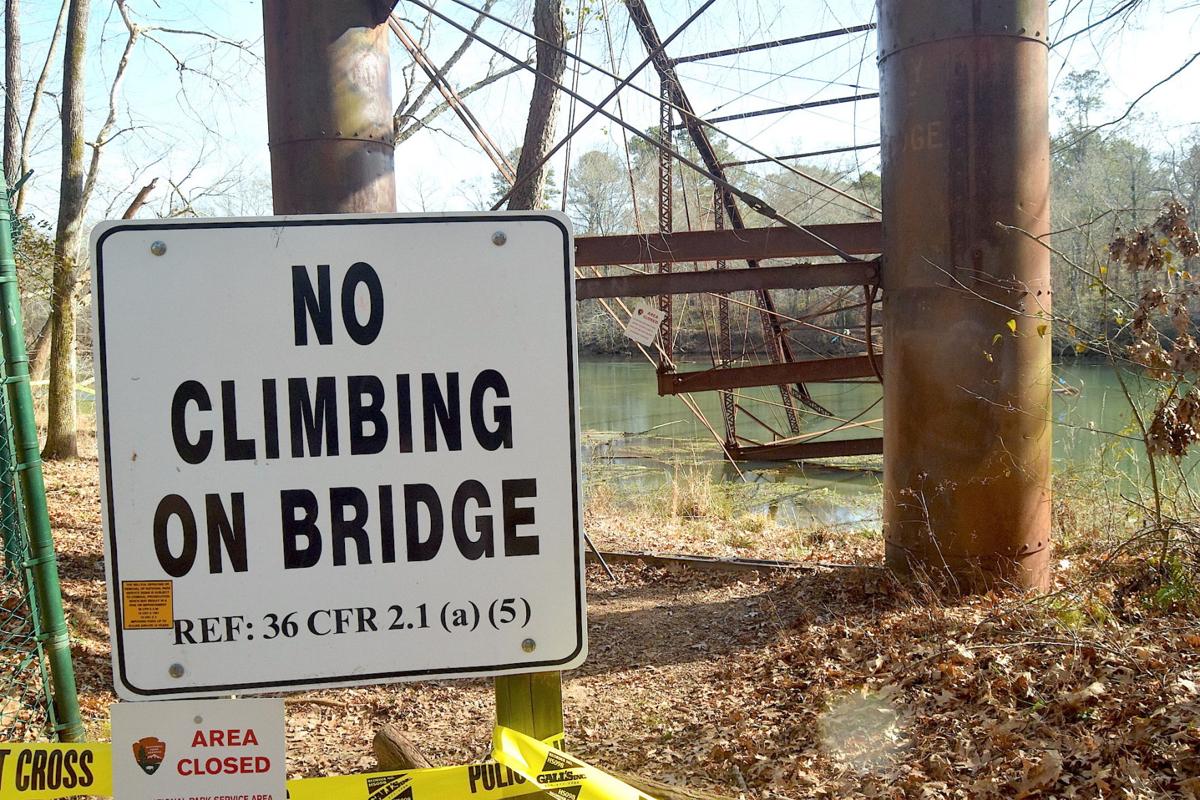 A sign warns visitors to the Chattahoochee River National Recreation Area to not climb on the old Jones Bridge Friday. The last remaining section of the bridge collapsed into the river after two of its support piers gave way Thursday. (Staff Photo: Curt Yeomans) 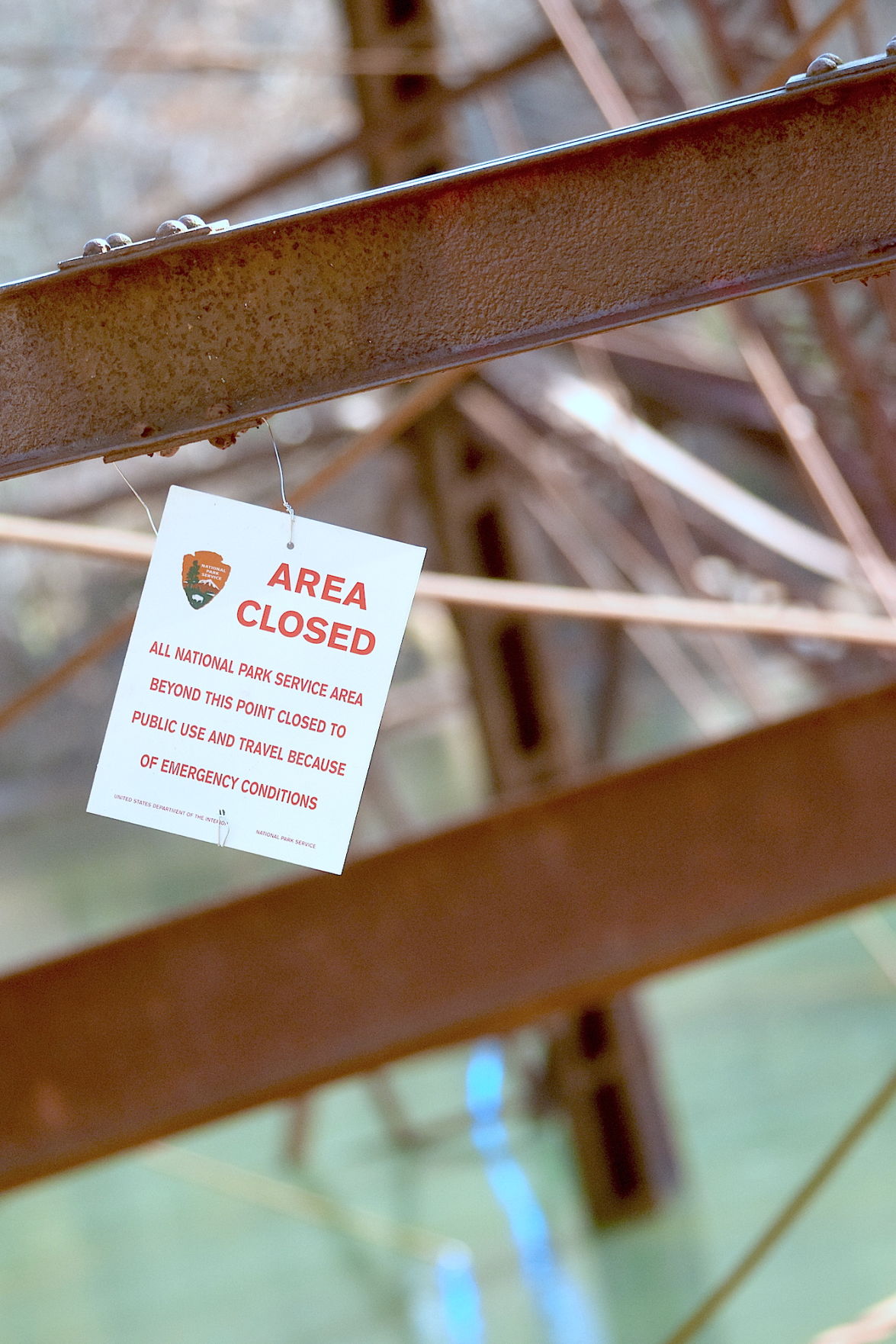 A National Park Service sign advising visitors to stay away from the collapsed remains of the old Jones Bridge hangs from one of the bridge’s beams Friday. The more than 100-year old bridge collapsed into the Chattahoochee River Thursday. (Staff Photo: Curt Yeomans) 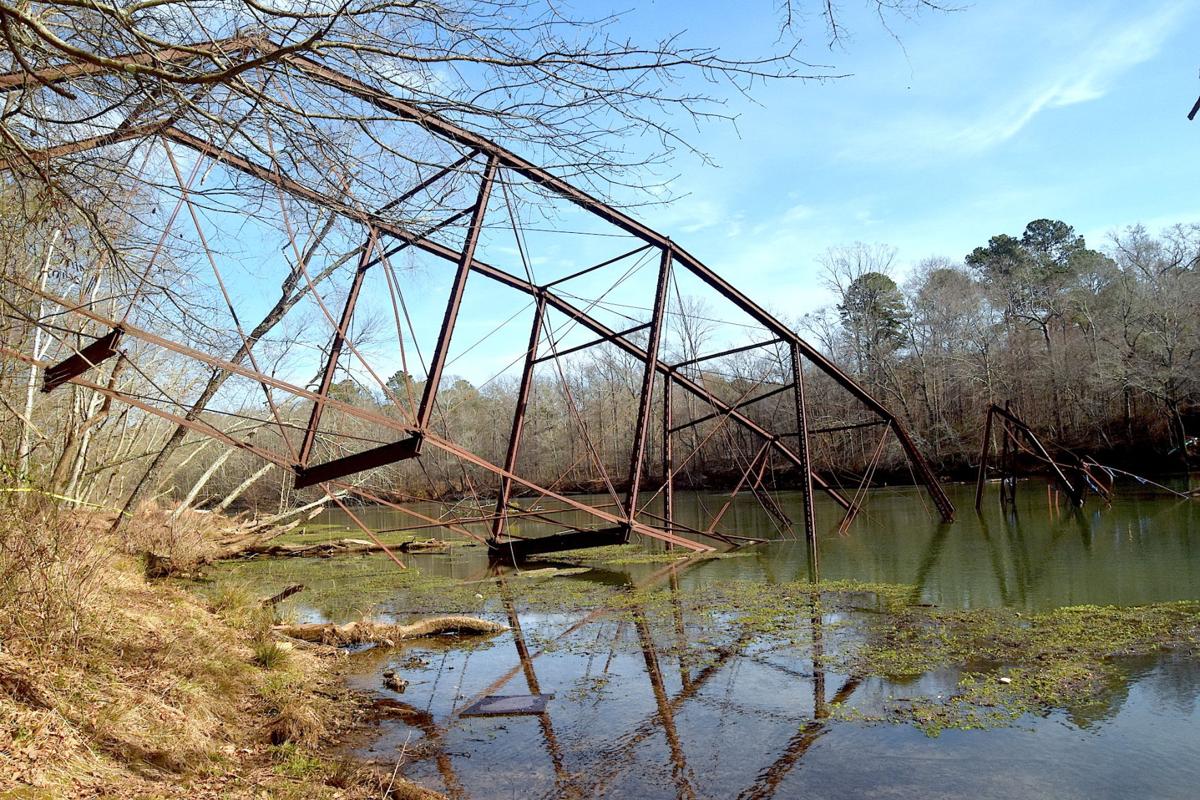 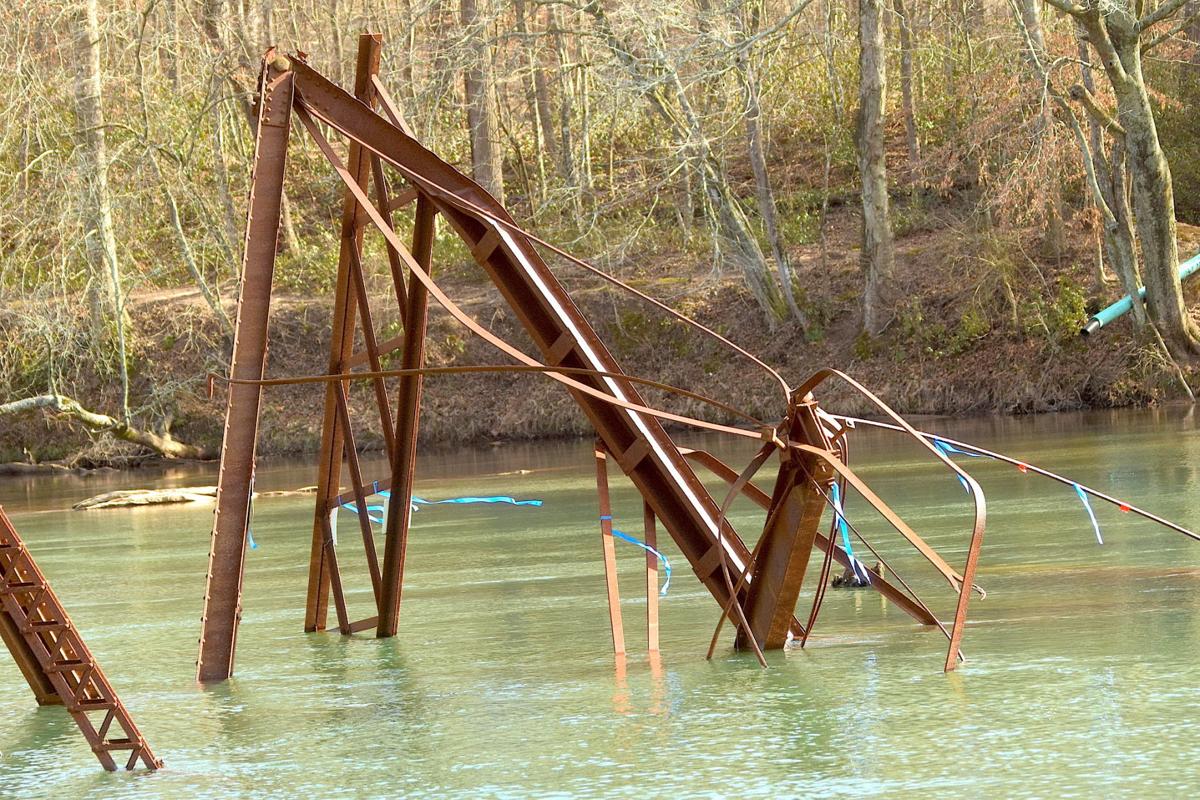 Blue ribbons attached to part of the collapsed Jones Bridge flutter in the wind Friday. The more than 100-year old bridge collapsed into the Chattahoochee River Thursday after two of its support piers gave way. (Staff Photo: Curt Yeomans) 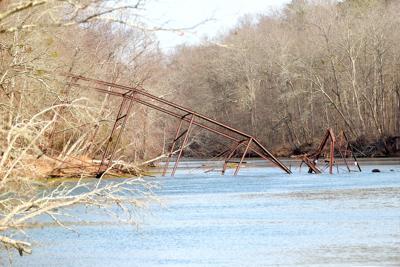 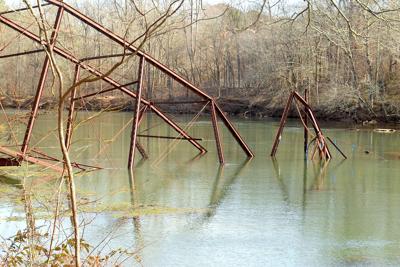 A sign warns visitors to the Chattahoochee River National Recreation Area to not climb on the old Jones Bridge Friday. The last remaining section of the bridge collapsed into the river after two of its support piers gave way Thursday. (Staff Photo: Curt Yeomans)

A National Park Service sign advising visitors to stay away from the collapsed remains of the old Jones Bridge hangs from one of the bridge’s beams Friday. The more than 100-year old bridge collapsed into the Chattahoochee River Thursday. (Staff Photo: Curt Yeomans)

Blue ribbons attached to part of the collapsed Jones Bridge flutter in the wind Friday. The more than 100-year old bridge collapsed into the Chattahoochee River Thursday after two of its support piers gave way. (Staff Photo: Curt Yeomans)

A lot has happened in the world since Jones Bridge was erected as a way to get people and goods across the Chattahoochee River in about 1904.

There have been 20 presidents of the United States during the bridge’s lifetime. Two world wars were fought. Women gained the right to vote and decades later launched a liberation movement. The civil rights movement brought segregation of public spaces to an end. The Cold War began and ended, and the global war on terror emerged in its place.

It was built about three years after Queen Victoria died, and her son, Edward VII, was king of the United Kingdom at the time it was erected. Now her great-great-granddaughter, Elizabeth II, sits on the throne.

But, after more than a century, the last remaining part of the camelback through truss bridge partially collapsed into the river this past week.

“It looks like the pier structure that held up the bridge that was in the middle of the river, it looks like that collapsed,” said Bill Cox, superintendent of the Chattahoochee River National Recreation Area. “Those piers were just metal, and hollow as far as I can tell, and it probably just gave way under the stress and from time, and the cold temperatures probably stressed the metal a little bit.”

The bridge section that collapsed around 1 p.m. Thursday was on the Fulton County side of the river, on land that is part of the national recreation area in Johns Creek. The metal support piers that stood in the middle of the river gave way, sending that end of the bridge’s skeletal frame down into the swift waters.

The two support piers that stood on the shore in the recreation area still stand, however, leaving half of the river channel blocked by debris.

And that raises safety concerns for the National Park Service, which runs the recreation area. In addition to the federally run areas along the river, there are also several parks run by cities and counties that border the river.

That means there are several boat ramps north of Jones Bridge, which in turn means there’s a possibility kayakers and canoe users could get caught in the debris.

“It is a hazard to navigation, and we have posted signs at Medlock Bridge warning people about the hazard to navigation,” Cox said. “I had folks, our law enforcement rangers, flag the structure in the water so people can be sure to see it and avoid it, and we secured the area (Thursday) for hikers from the shore, so I think we’ve done what we can.”

Still, Cox said there are some concerns that when water released from Buford Dam reaches the bridge, the water level will rise to the point that a portion that sticks up out of the middle of the river won’t be as easy to see and avoid.

“I’m glad it happened in the winter when we don’t have as much (traffic) on the river,” Cox said. “That side of the river — the Johns Creek, Fulton County side is shallow. Most people paddle on the other side because it’s deeper, so thankfully it’s not in the path of most paddlers, but we’ve got to get it out of there before the summer busy season starts.”

No one is quite sure officially why that side of the bridge was dismantled, but there are local stories that speculate on it.

Cox said the general story among locals is that it was pulled down by some area residents for scrap metal. The bridge ceased to be used for travel across the river in 1922 and was falling into disrepair by the 1930s.

Cox wasn’t sure when the Gwinnett side was pulled down.

Johns Creek resident Keith Morris, who lives near the park and hikes the loop past the bridge daily, said he heard it happened during World War II. As a retiree, Morris volunteers to help pick trash in the park during his walks.

“Some outfit came and dismantled the span that goes out from Gwinnett and then they were stopped with a cease and desist order, and so what’s left has been there ever since,” he said.

Morris said he’d noticed on his daily walks that the support piers that stood in the river had begun to tilt. He did not see the collapse happen, but he walked by not long afterward Thursday.

“To me, it looked like it was more and more tilted, but I thought it was just my mind playing games with me and that nothing had really changed,” Morris said. “It had to be (tilting) because then it just fell into the water. When it collapsed, the structure just went down into the water.”

There is a sense of historical significance attached to the bridge that Cox said has to be taken into consideration.

“Only part of the bridge existed and now that part has fallen into the river,” he said.

It isn’t clear how much of the bridge will remain, if any of it will, now that the collapse has happened. The truss is not expected to go back up, so the only piece of the bridge that could remain are the support piers on the shore.

Cox said he has already reached out to the state historic preservation officer to determine what can or should be done.

“It’s really, at this point, a matter of pulling it out of the river,” Cox said. “I’ll talk to the state about (leaving the support piers that are on the shore). You know, they may want a plaque out there, or some pictures. That’s kind of what I want to ask them. Do they want something to document that there was a bridge there at one time?”

After more than a century, the last remaining part of Jones Bridge partially collapsed into the Chattahoochee River this past week.