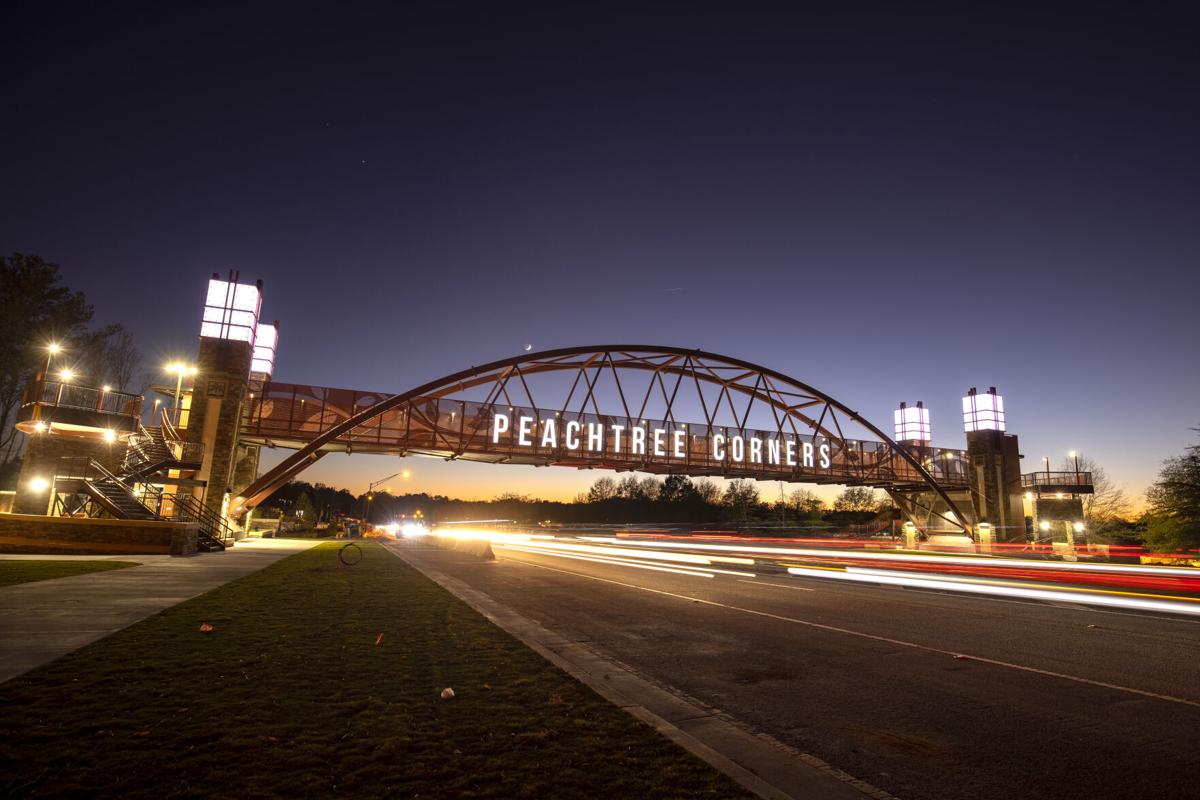 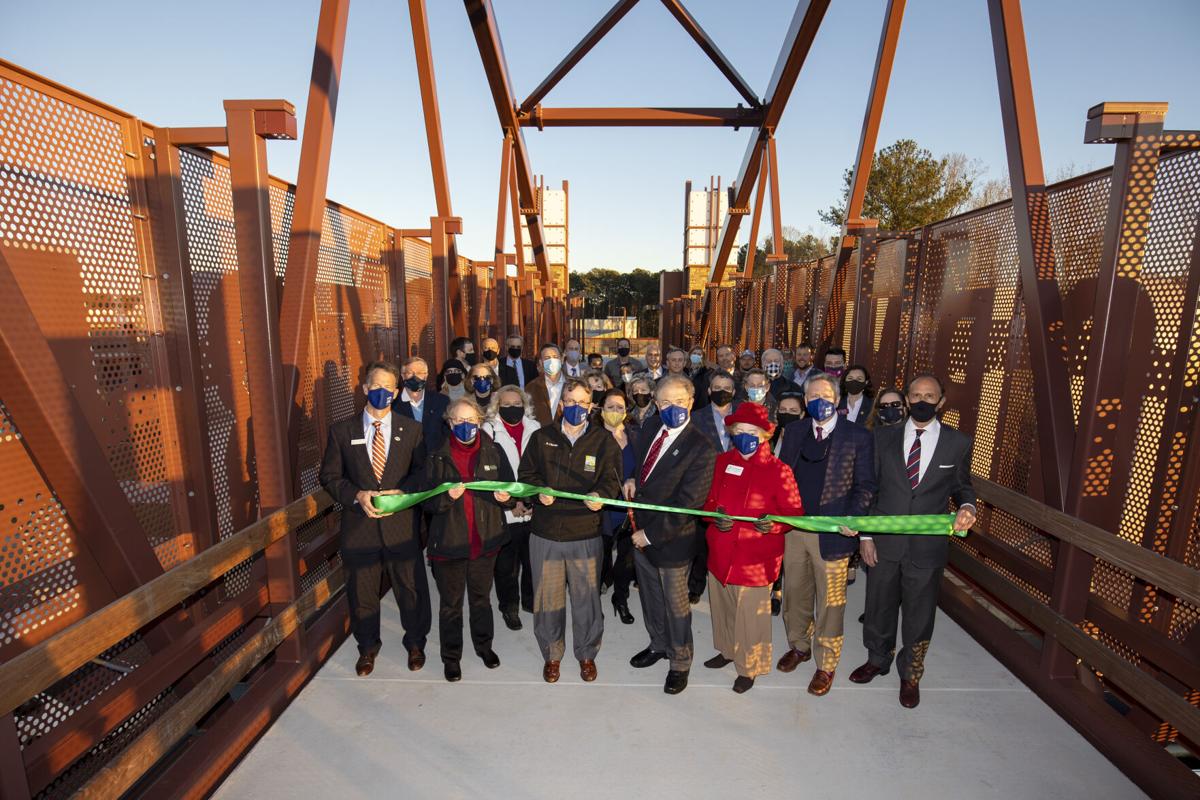 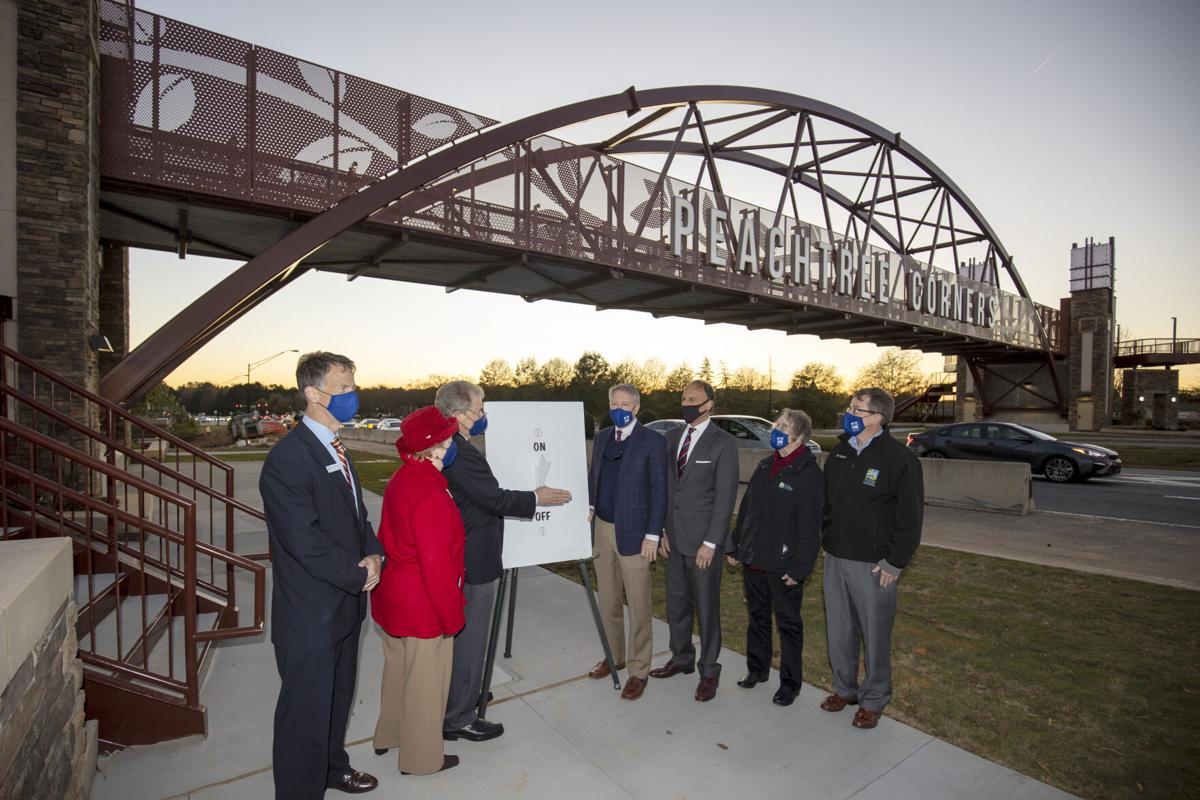 Peachtree Corners officials flip a “switch” to turn on lights at the city’s new pedestrian bridge over Peachtree Parkway, connecting the mixed-use Town Center development with the Forum shopping center, on Tuesday. 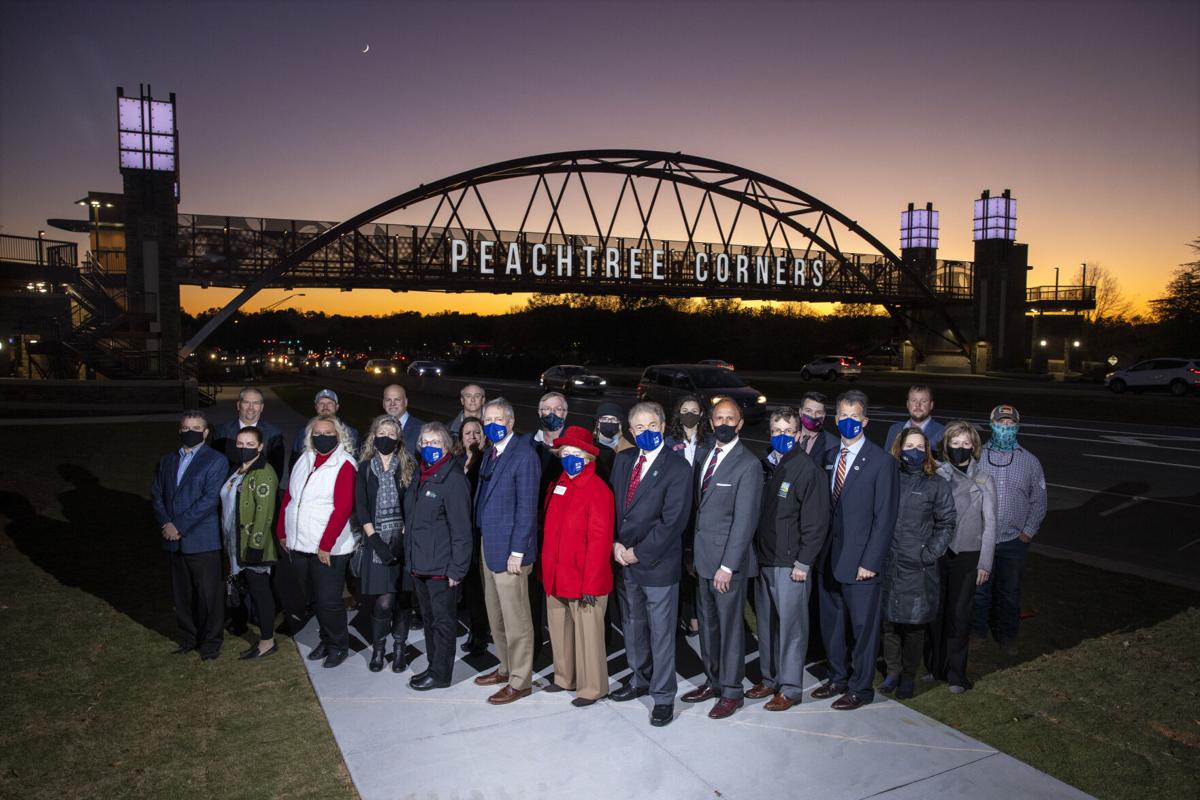 Peachtree Corners officials pose for a photo in front of the city’s new pedestrian bridge over Peachtree Parkway, connecting the mixed-use Town Center development with the Forum shopping center, on Tuesday. 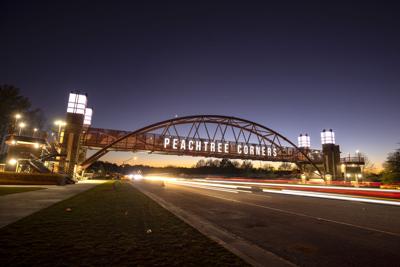 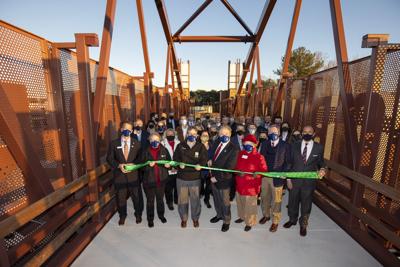 Peachtree Corners officials flip a “switch” to turn on lights at the city’s new pedestrian bridge over Peachtree Parkway, connecting the mixed-use Town Center development with the Forum shopping center, on Tuesday.

Peachtree Corners officials pose for a photo in front of the city’s new pedestrian bridge over Peachtree Parkway, connecting the mixed-use Town Center development with the Forum shopping center, on Tuesday.

Peachtree Corners residents and visitors can now walk across Peachtree Parkway, between the Forum and the Town Center developments, without worry.

The city’s long-discussed pedestrian bridge over Peachtree Parkway opened this past week, providing a connection between the mixed use Town Center — which the city co-developed with private partners to include public amenities, residences and restaurants — and the privately-owned Forum shopping center.

“We’ve waited a long time to experience this moment,” said Mayor Mike Mason. “We are thankful that the city now has a safe way for our residents and visitors to cross over Peachtree Parkway to the Town Center. This busy four-lane thoroughfare carries over 55,000 vehicles a day. It was a real challenge to cross the road on foot, especially for families with young children in tow. Now everyone will be able to cross the road safely.”

The bridge has been a longtime goal of Peachtree Corners, going back to the city’s early days when its Comprehensive Plan was adopted in 2013. The town center was already being considered and the bridge was included in the Comprehensive Plan as part of a larger goal of connecting key parts of the city.

The new elevated pathway is being seen as a way to help improve walkability, not just for the Forum and Town Center area, but across the city as a whole.

“The completion of this bridge not only provides a safe connection between two prominent shopping and entertainment districts,” City Manager Brian Johnson said. “It also provides an expansion opportunity for the city’s multi-use trail system.”

Within the next year, city officials plan to have the bridge connect to a trail at the Town Center development that will run alongside a stream, which will in turn provide a connection to existing trails that run along Peachtree Corners Circle and Medlock Bridge Road and connect to other trails running north to Peachtree Corner’s neighboring cities.

The thrust arch style bridge is very different from a previous winding design that had been considered at one time and would have included two large poles holding the bridge up.

The final design that was ultimately used is instead intended to be a call back to the original Jones Bridge that used to cross the nearby Chattahoochee River. City officials said the pedestrian bridge was designed to reflect the old Jones Bridge’s design, even having the same color.

But, there are some differences between the two bridges. For starters, the old Jones Bridge was designed to be driven on while this new bridge is solely designed to be walked on with a 190-foot walkway.

The new bridge also has two elevators and two sets of stairs that residents and visitors can use to get to the elevated span.

“The bridge team is very happy to see this segment of the overall Corners Connector trail open and available to the community,” Peachtree Corners Public Works Director Greg Ramsey said. This is now a safe and efficient crossing over a very busy highway, and its placemaking will serve the community well into the future.”

IN CASE YOU MISSED IT: Top Gwinnett County stories from Nov. 16-22

This is not a scientific poll — results reflect only the opinions of those voting.
The Georgia House of Representatives and state Senate are at loggerheads over how Georgians should tell time. The House passed legislation last Friday calling for the Peach State to observe daylight saving time all year. That followed action the Senate took the week before to put Georgia on standard time permanently. Which do you prefer?

It's not just you. Your pets are also putting on the pounds during the pandemic