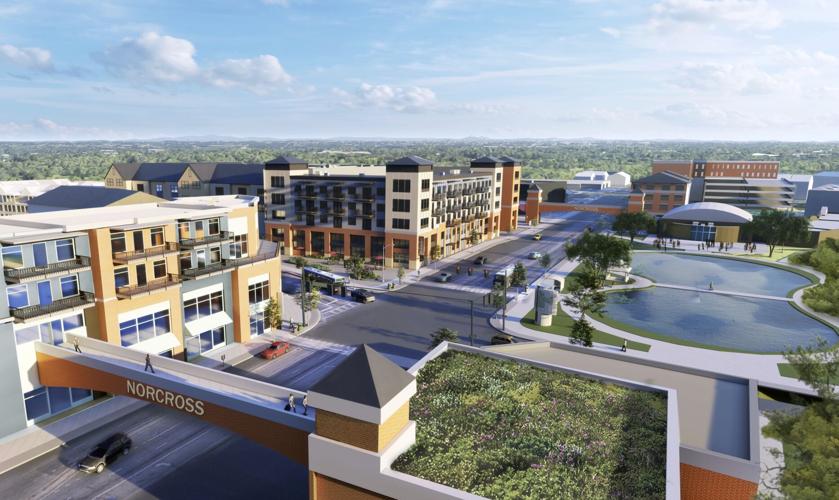 This rendering from Norcross’ Buford Highway Master Plan shows the increased density planned for the section of the highway located at downtown Norcross. The plan was recently approved by the City Council. 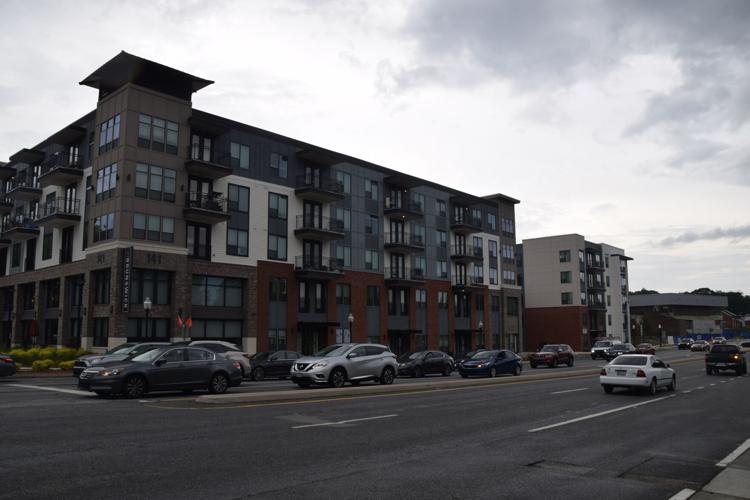 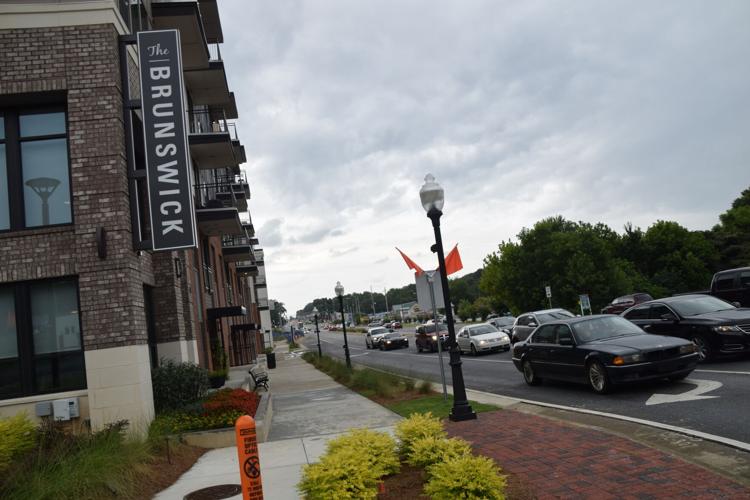 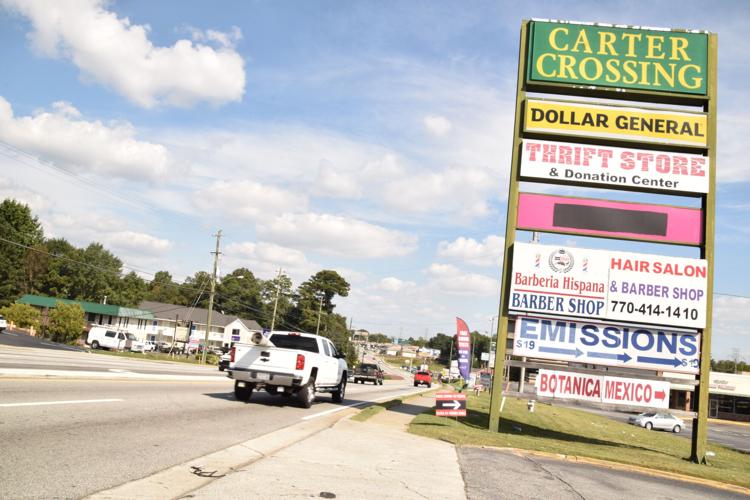 Cars travel north along Buford Highway, heading from Jimmy Carter Boulevard toward downtown Norcross, on Wednesday. The Norcross City Council recently approved a Buford Highway Master Plan that calls for denser redevelopment along the part of the highway corridor that runs through the city. 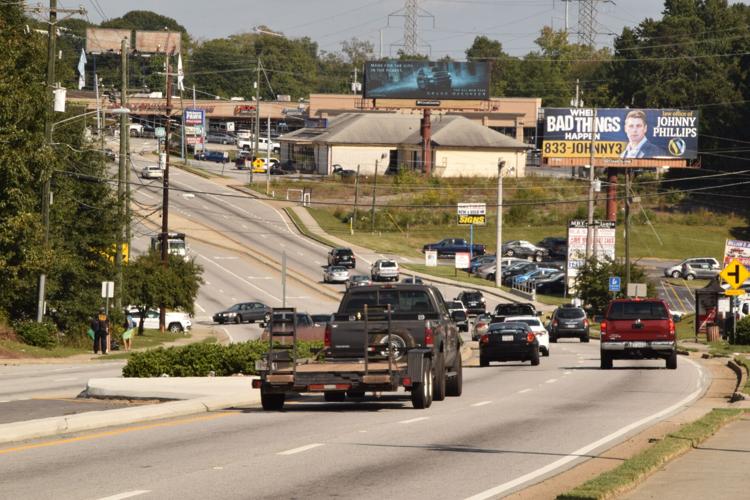 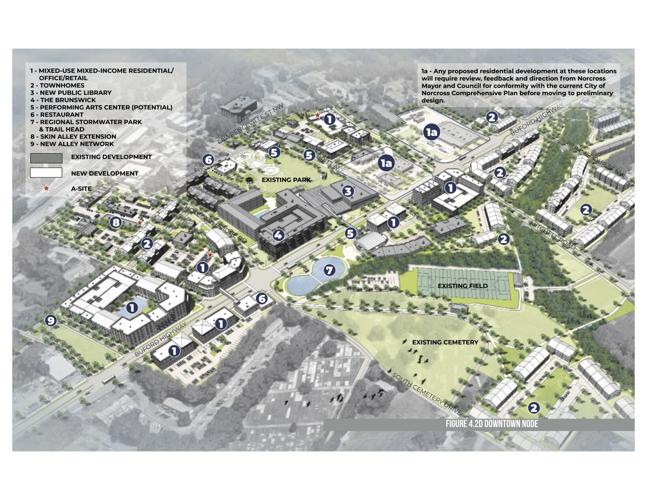 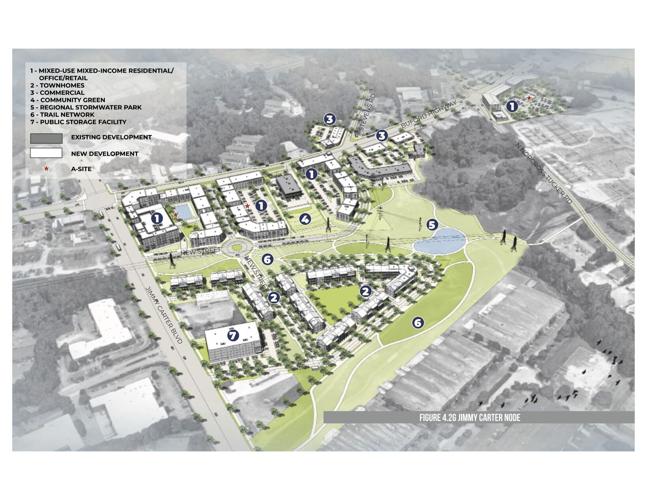 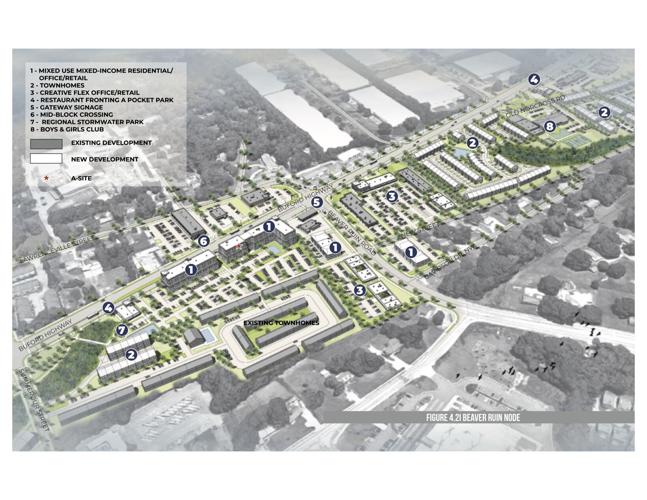 This rendering from Norcross’ Buford Highway Master Plan shows the increased density planned for the section of the highway located at downtown Norcross. The plan was recently approved by the City Council.

Cars travel north along Buford Highway, heading from Jimmy Carter Boulevard toward downtown Norcross, on Wednesday. The Norcross City Council recently approved a Buford Highway Master Plan that calls for denser redevelopment along the part of the highway corridor that runs through the city.

Visitors who drive through Norcross on Buford Highway see an assortment of land uses along the corridor.

What they won’t see is one common theme or design running through all of those uses. But that could change in the future.

The Norcross City Council recently voted to adopt the Buford Highway Master Plan, which outlines plans for how the corridor, between Jimmy Carter Boulevard and Beaver Ruin Road, should be redeveloped — adding a denser, more urban feel along at least parts of the corridor.

“Good things are happening (on Buford Highway),” Norcross Economic Development Director Will Corbin said. “Not everything I can talk about, but I will say plans like these are so important because in economic development, we can use them as a blue print.

“No, you’re not going to see everything (exactly) as is shown, but it’s a really good tool for my toolbox and the toolbox here at the city to share with developers and investors and stakeholders so we are excited about this and things are already happening.”

The master plan breaks the Buford Highway into three distinct sections, or nodes. Those sections are the Beaver Ruin Node, the Downtown Node and the Jimmy Carter Node.

Meanwhile, the Downtown Node is in the middle, stretching between Summerour Street and just south of Carlyle Street. At its center is the existing Brunswick apartment and retail development and the soon-to-open new Norcross library branch.

“Generally, it’s looked at as probably a 20-year plan, but we hope that as soon as the first domino falls, you might see a lot of properties go in succession,” Community Development Director Tracy Rye said. “Of course, it’s always up to the economy to do that, but we look at it as a 20-year plan.”

The Downtown Node would be the densest section of Buford Highway after redevelopment with six spots directly on the highway picked to eventually be used for mixed-use residential, office and retail developments that would be similar to the Brunswick.

There is also a section facing the highway, between Summerour Street and Mitchell Road that is targeted for eventually town home redevelopment as well as a restaurant at South Cemetery Drive and Buford Highway and a potential performing arts center across the highway from the new library.

A stormwater park is proposed for the corner of South Cemetery Drive and Buford Highway, across from the planned restaurant spot. That park would also serve as a trail head.

The Downtown Node also calls for additional redevelopment on the existing downtown side of the highway, though.

This includes an extension of Skin Alley — which connects Jones Street with Holcomb Bridge and is home to Social Fox Brewing among other businesses — south of Holcomb Bridge to the backside of the Southend restaurant, retail and entertainment development as will as some town home along that extension.

“Currently, the developer at Southend is working with (next door neighbor) B&W Burgers to extend (Skin Alley) across Holcomb Bridge all the way through their developments,” Corbin said. “So, it’s very exciting that the private sector is kind of working together for that.”

One change the City Council made before approving the plan involved planned uses for two parcels of land on either side of the entrance to Lillian Webb Park on College Street.

That change allows the plan to continue to be open to development as a restaurant at the corner of Britt Avenue and College Street, with council members saying public notice signage has already gone up that indicates a restaurant is preparing to file an application to develop that space.

“I heard that it’s going to be something similar to what downtown Duluth has (with Truck and Tap),” Councilman Andrew Hixson said.

The original version of the master plan pegged that corner for a performing arts center use, which the council gave some leeway to still possibly happen if the restaurant does not pan out, while the parcel on the other side of the park entrance, between the entrance and some town homes was set for a restaurant use.

That parcel next to the town homes was changed to a “community use” space that could be a farmers market or some other flex use.

A mixed-use residential, office and retail use has been pegged for the corner of Mitchell Road and Lawrenceville Street.

In all, the Downtown Node is intended to be redeveloped with about 375 multi-family apartments, 15 residential units over retail uses and about 143 town homes.

Redevelopment of the section of Buford Highway where the post office and an Advance Auto Parts store are located are tentatively potential pegged for mixed-use redevelopment, but the plan states ant residential redevelopment on those properties would have to be reviewed by the City Council for conformity with the Norcross Comprehensive Plan before they could proceed.

The Jimmy Carter Node would stretch from, as its name suggests, Jimmy Carter Boulevard to just north of Norcross Tucker Road.

It would not be quite as dense as the Downtown Node altough it would still have some urban density directly along Buford Highway and Jimmy Carter Boulevard. Behind those developments, however, would be a community green space, trails, a regional stormwater park and town homes.

There are four mixed-use residential, retail and office developments envisioned along Buford Highway in this node, as well as two areas of commercial redevelopment. The town homes would be built on the current site of the HomeTowne Studios extended stay hotel and a public storage business.

In all, the city envisions adding about 355 multi-family units and 48 town homes in the Jimmy Carter Node.

A new multi-story public storage building would be built about where the entrance to the existing public storage property on Jimmy Carter Building is located.

This node, like the other two, includes some mixed-use residential, retail and office developments as well as town home developments, but it also adds in some items not seen in the other nodes.

One of the unique parts of the Beaver Ruin Node is that it includes two flex office and retail developments, gateway signage and a Boys and Girls Club that would be located near the intersection of Buford Highway and Old Norcross Road. The gateway signage would be located at the intersection of Buford Highway and Beaver Ruin Road.

There would also be two restaurants that face pocket parks, one on each end of the node.

The Beaver Ruin Node, like the Jimmy Carter Node, have a regional stormwater park, as well as four mixed-use residential, retail and office developments. It would have three town home developments, in addition to an existing town home community that is located in that node.

In all, The Beaver Ruin Node would have about 86 multifamily housing units and 144 town homes.

Plans already in motionAs for the things that Corbin said are already starting to happen on the Buford Highway corridor, he said city residents won’t have to wait too long to see movement in the area.

“You’ll see some things in probably the next nine to 12 months in terms of property movement in and around the downtown core,” he said.

That sits just fine with city leaders who are eager to see the corridor redeveloped, although Norcross Mayor Craig Newton said they understand they have to show some patience.

Plans are already in motion

POLL: The Fourth of July is Monday. How will you celebrate?

Check your email for details.

Your purchase was successful, and you are now logged in.