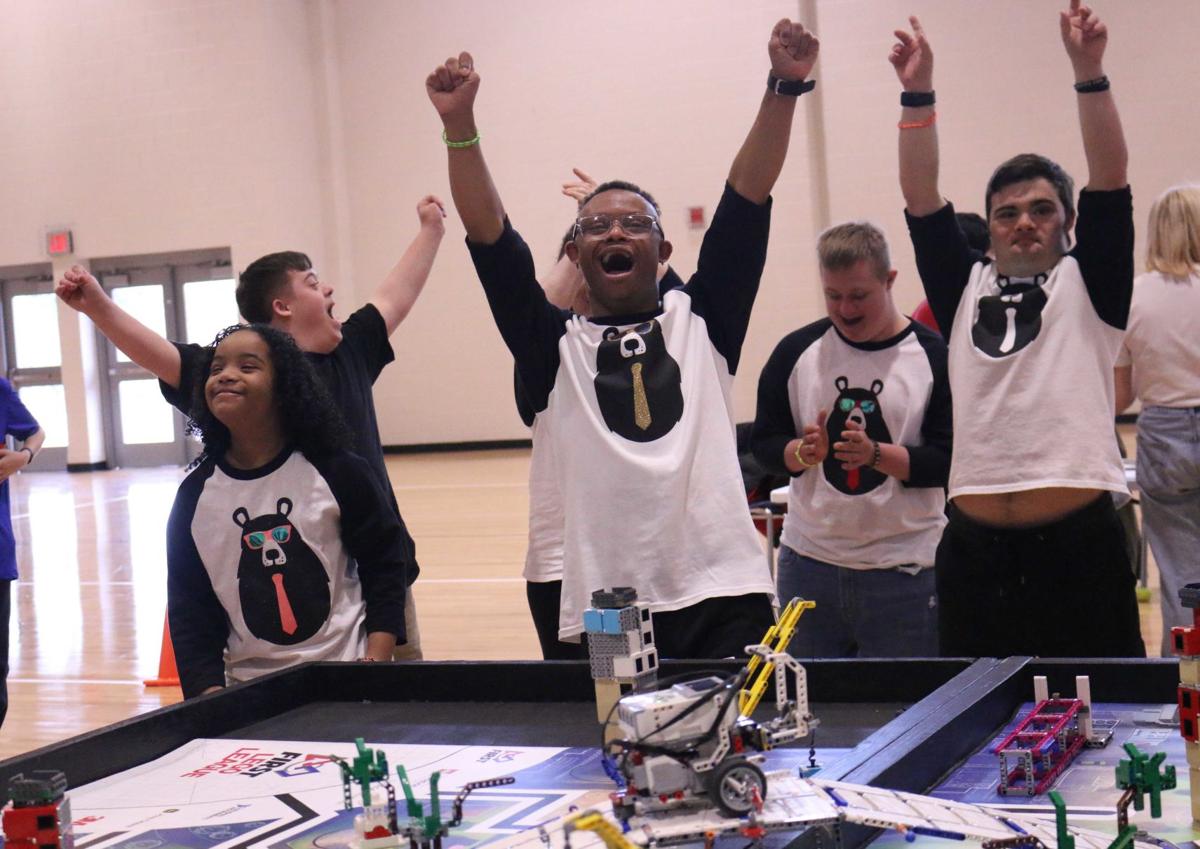 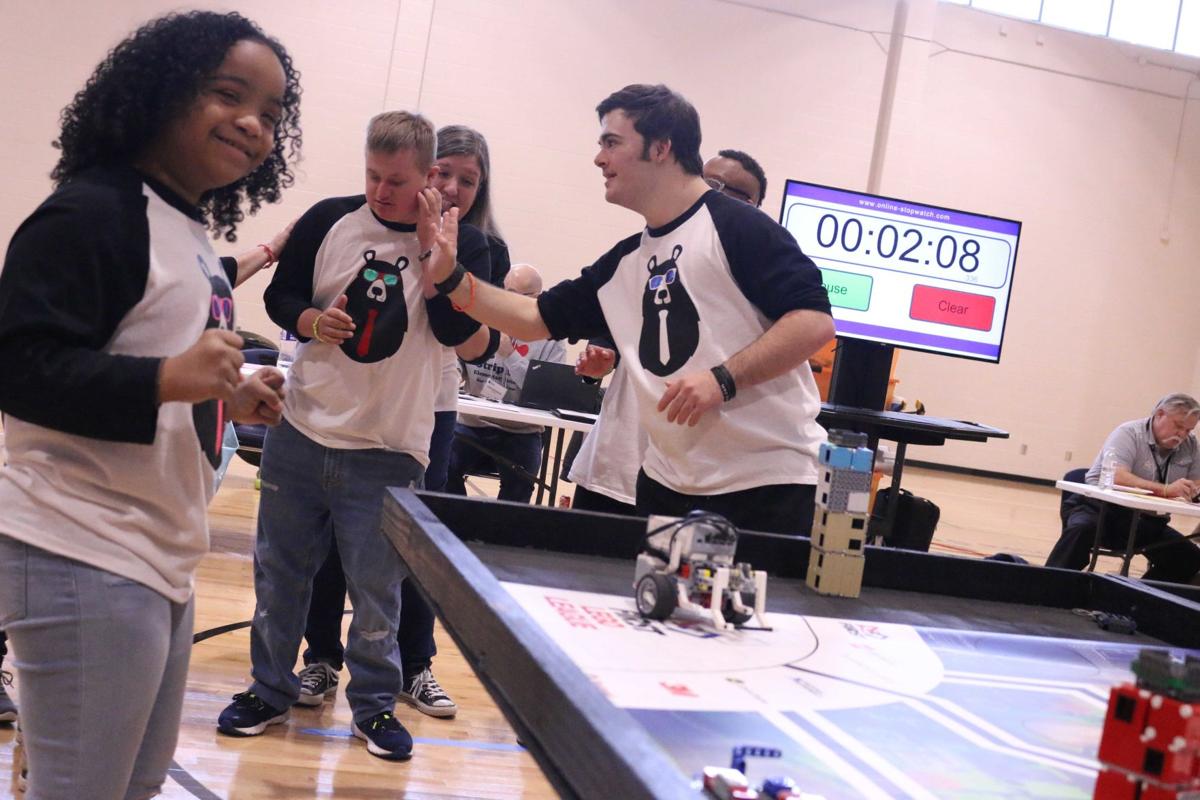 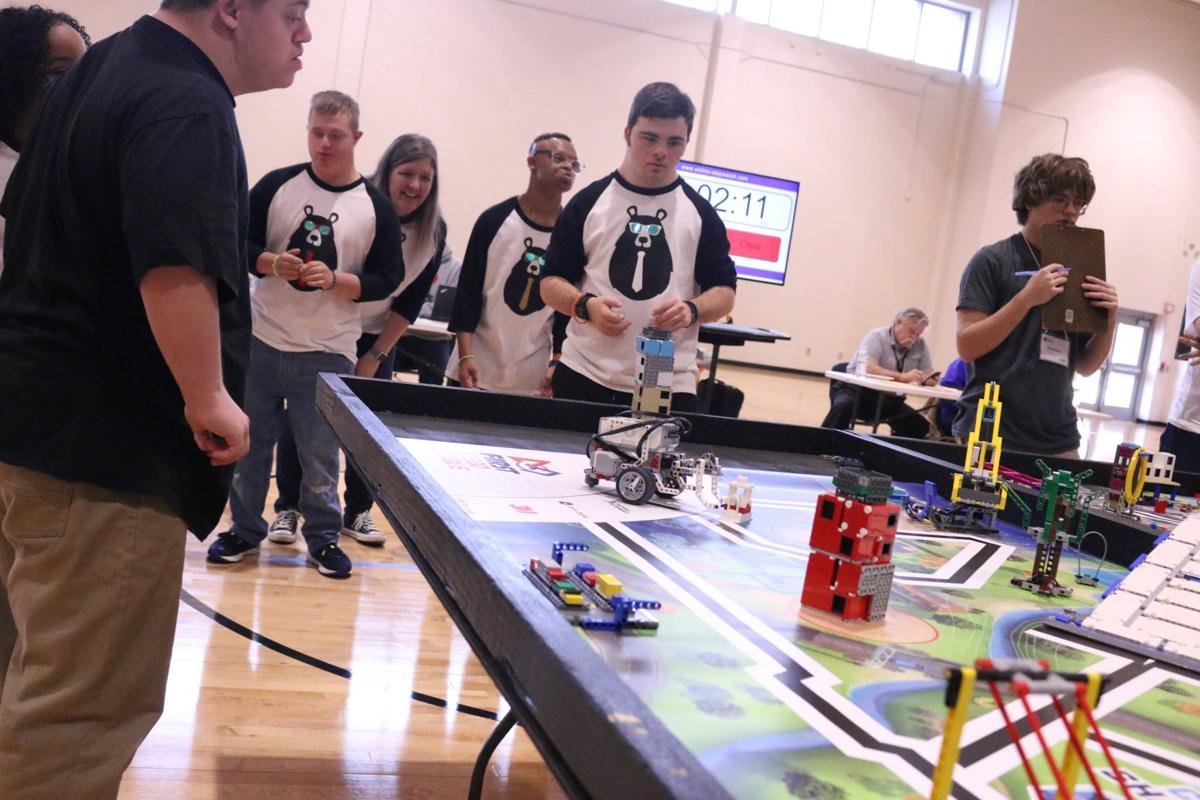 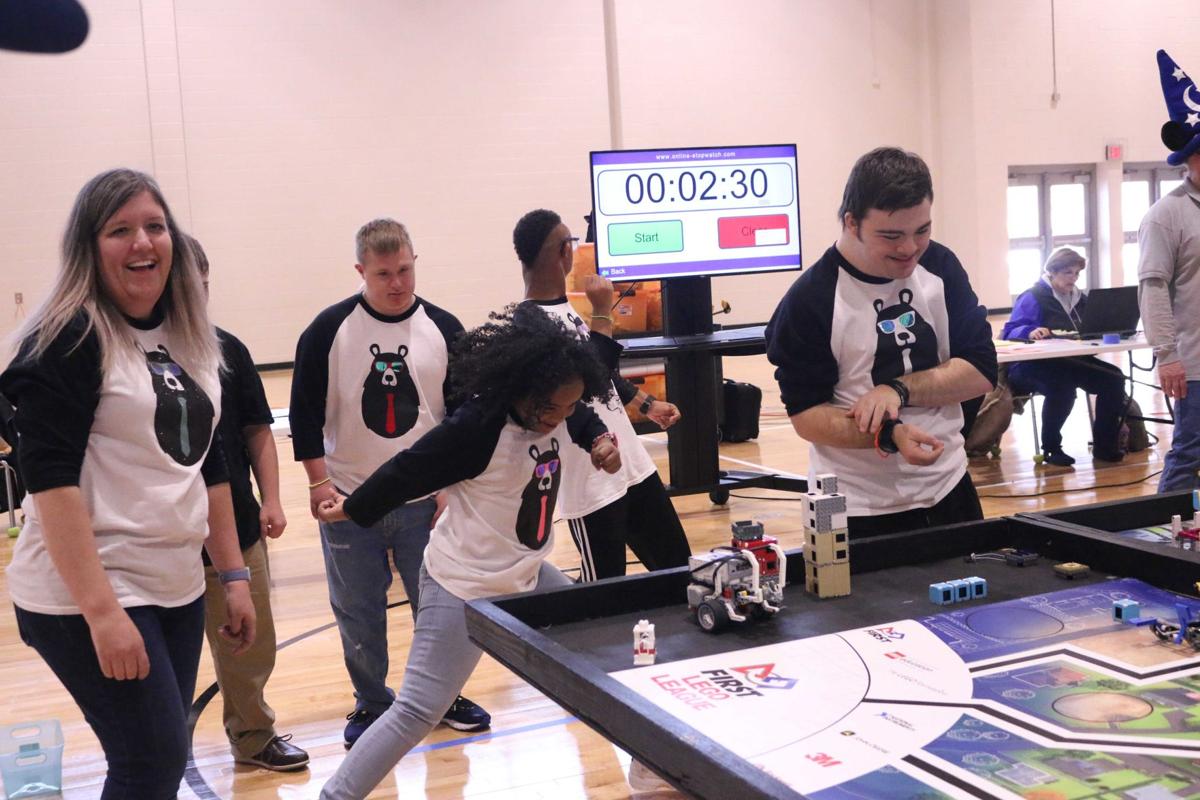 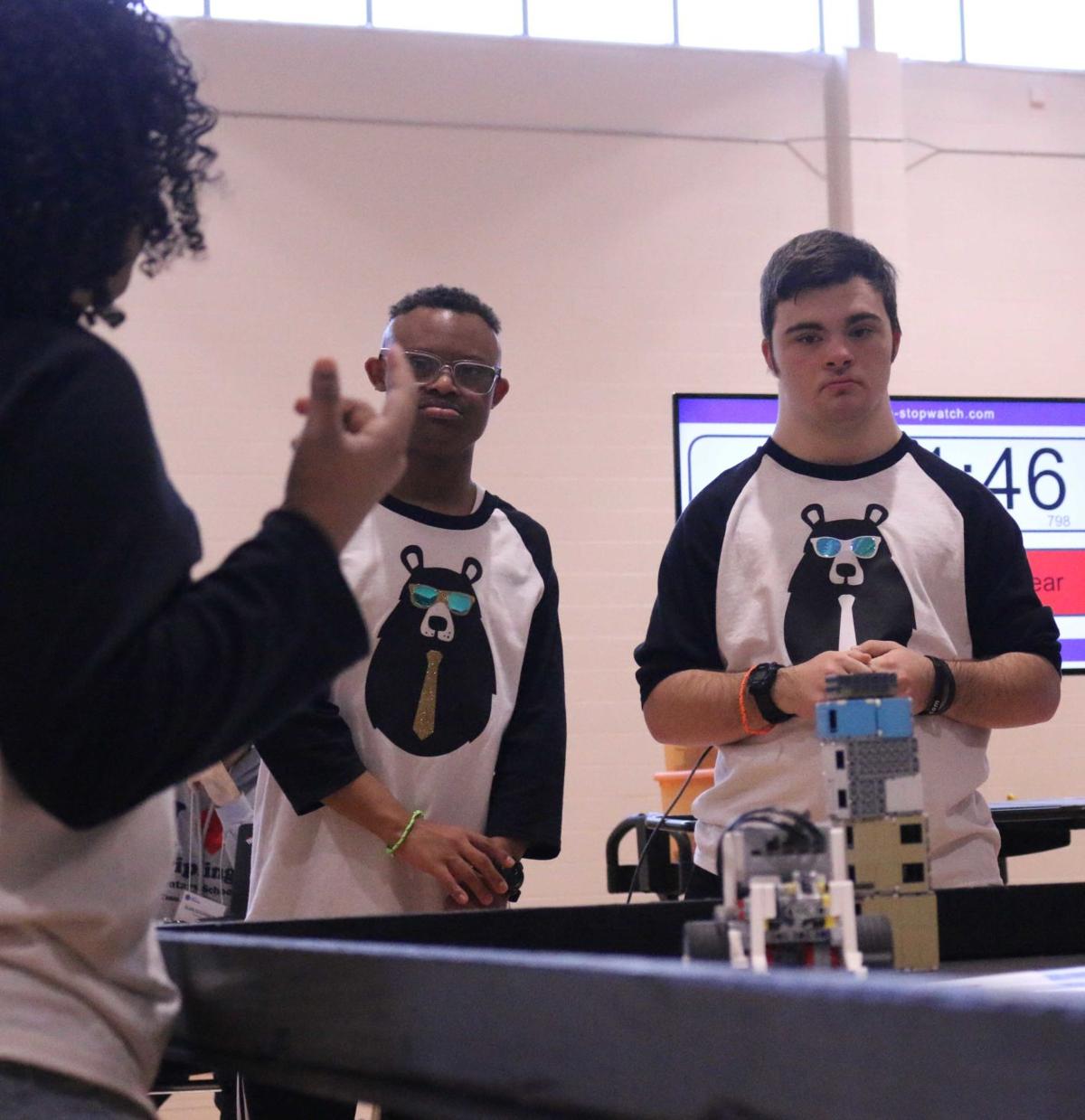 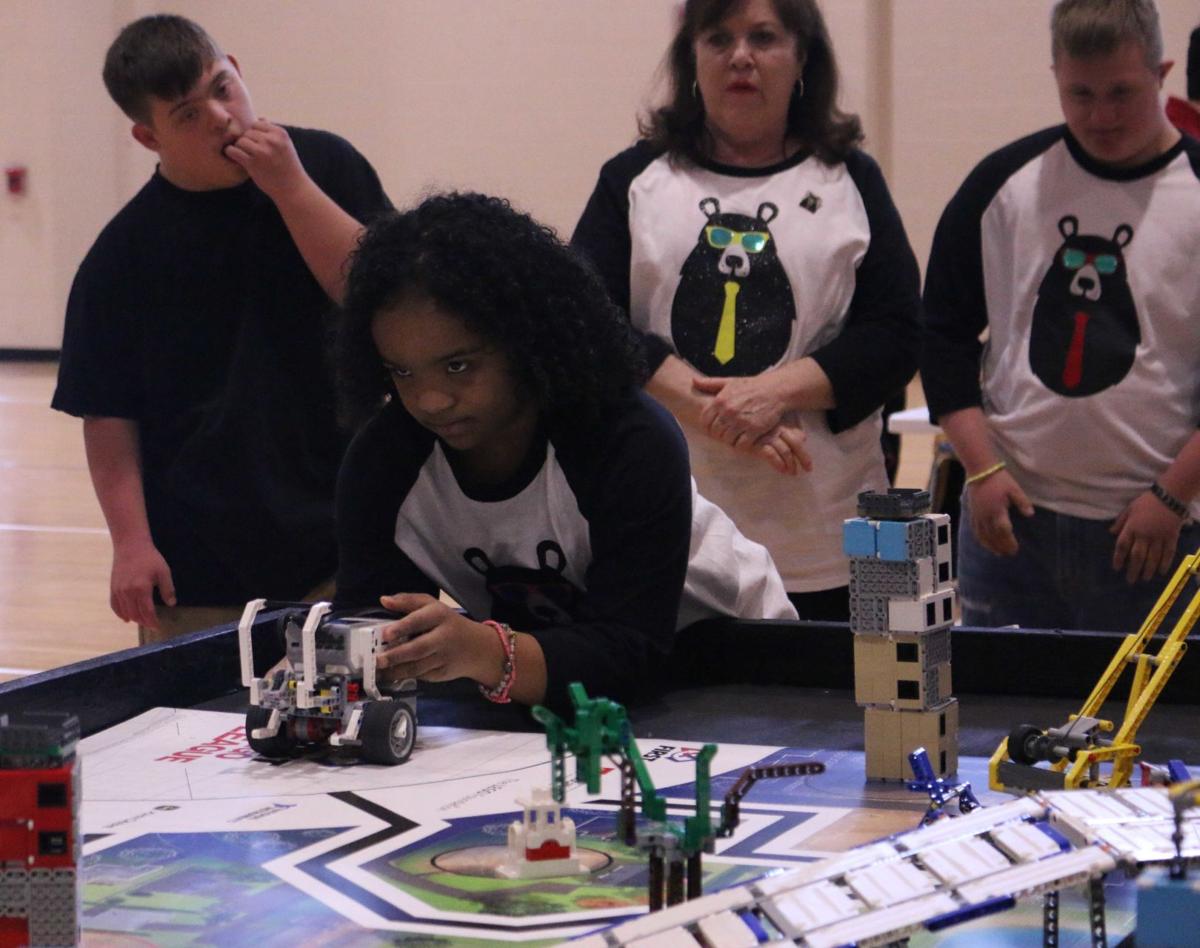 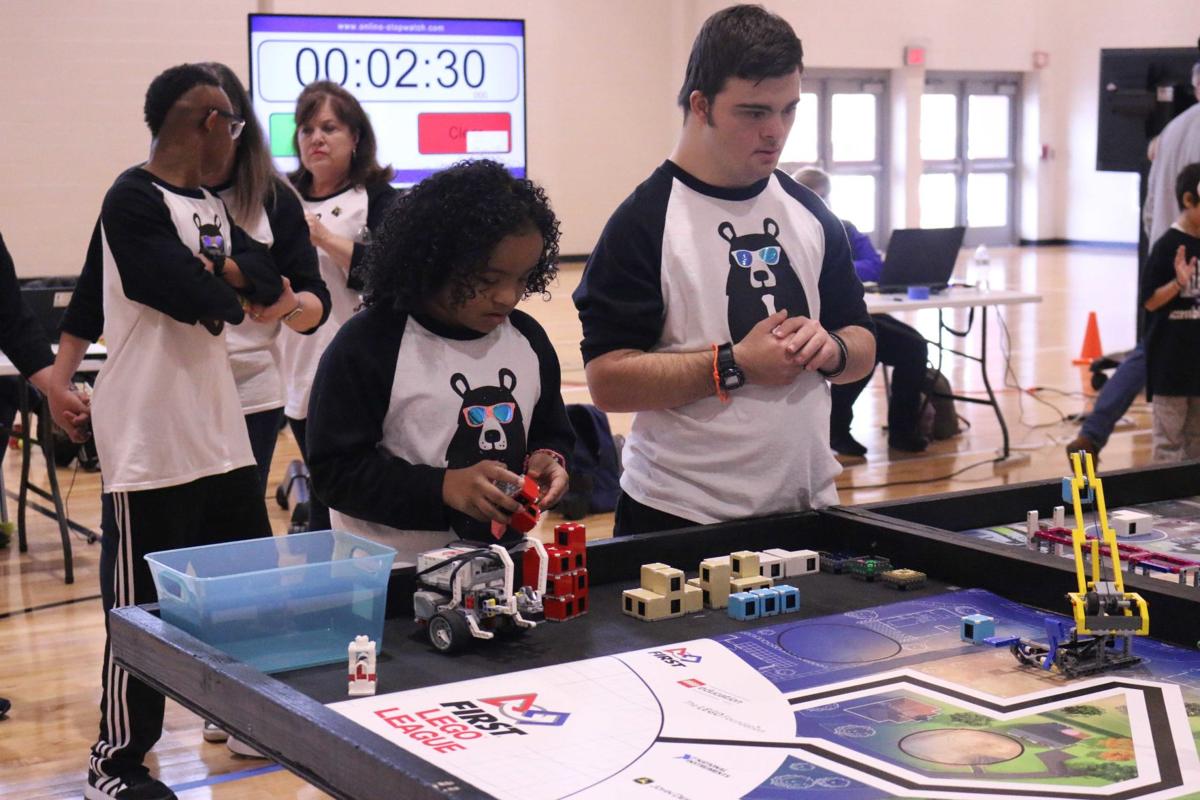 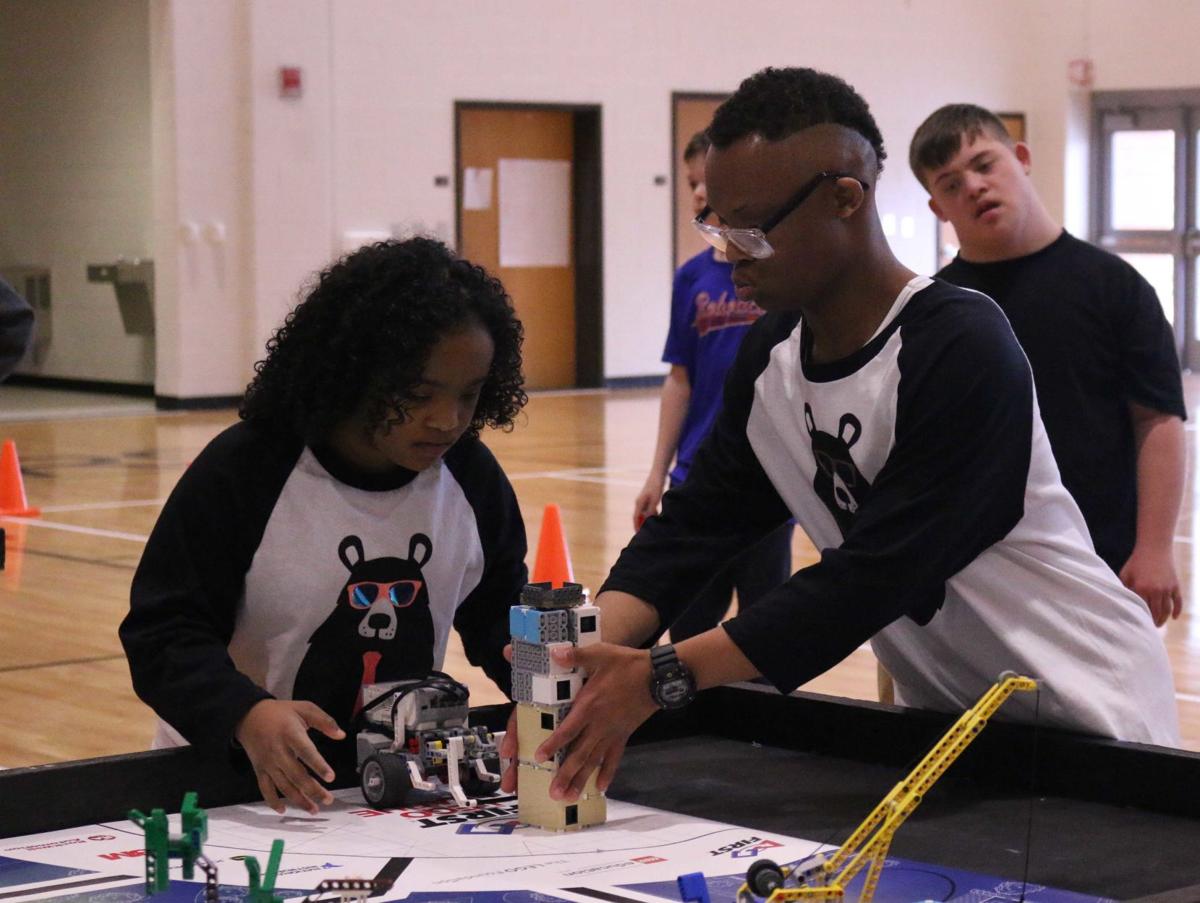 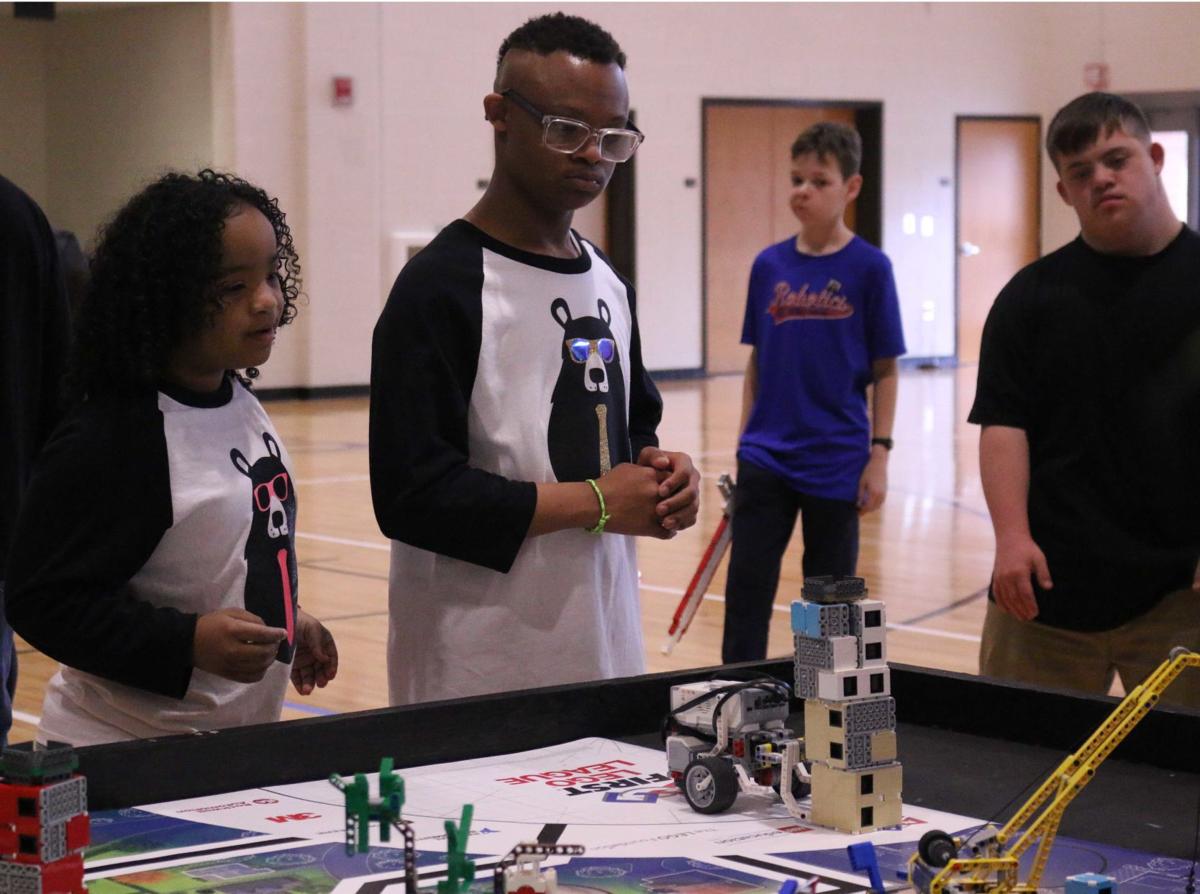 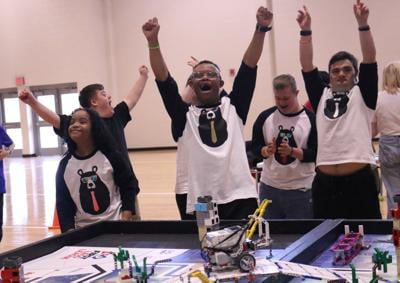 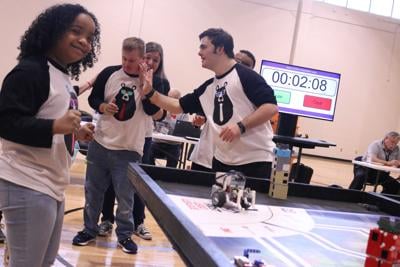 Minutes before the start of their second run on Saturday, the Mountain View High School Dancing Bears prepped their LEGO robot for its tasks.

The team had two minutes and 30 seconds to guide their four-wheeled robot, which they self-programmed, through several objectives. As other teams awaited the countdown with intense focus, the Mountain View squad took one last moment to break out into spontaneous dancing to Lil’ Jon’s “Turn Down for What?”

That is, after all, how they settled on their team’s name. For 20 to 30 minutes in Danielle Jenkins’ class, students get time to dance. They look forward to it almost as much as they look forward to programming their LEGO robot each day and practicing the challenges.

“We worked in my room with the Smart Board, and they did all of the programming, which is amazing,” Jenkins said. “They’re talking about negative numbers and percentages … it’s been amazing to watch that part of it.”

Students in Jenkins’ class have moderate intellectual disabilities and struggle with math facts and read below grade level. But she says they’ve taken well to programming their LEGO robot to complete the challenges.

The countdown signals the beginning of the competition. The robot, which they named Awesome Sauce, begins to roll around the playing field that resembles a LEGO city. It checks off objectives by moving blocks and LEGO people. A referee grades them on the completion of each objective and the efficiency.

Finally, it comes down to the last objective. With time running out, Lelah Pittman tries to guide her team’s robot up a bridge. They pre-programed the robot to roll straight for a few feet before taking a sharp left turn up a LEGO bridge. The robot falls over on the first try, but Pittman tries to set up the robot again. This time, Awesome Sauce follows through to perfection.

The team throws their hands in the air and shouts with joy. Jenkins hugs Pittman, beaming with pride. The Dancing Bears lived up to a motto they’d been repeating throughout the day.

“You have to keep trying,” Pittman said before the run.

Paul Duke STEM High School hosted one of eight super-regional competitions in Georgia on Saturday. Students from elementary and middle schools across Gwinnett County put their robots to the test and also presented a project in which they tried to solve a real-world problem.

Teams competed on Saturday to qualify for the state competition at the Georgia Tech campus on Feb. 1.

All Gwinnett County elementary schools have teams, and most enter in the regional competitions. Logan Malm, Gwinnett County Public Schools Elementary Science Director, said FLL makes science accessible to all students and encourages students to think about solving the problems of tomorrow.

“Not only is it promoting students’ civic responsibility, it’s also promoting this idea that science and STEM is for everybody,” Malm said.

The Dancing Bears were wrapping up their season. This is the first year Jenkins’ class competed in the FLL. She was first introduced to FLL by her daughter and noticed how it taught her problem solving and mature communication skills. Jenkins’ students get the same benefits from it as other elementary schoolers.

FLL teams typically consist of elementary and middle school gifted students. Jenkins’ students have been fully participating in every aspect of FLL. They won the Champions Award at their regional competition.

“To me, this is inclusion in a beautiful form,” Jenkins said.

In the coming months, Jenkins hopes to organize more FLL teams made up of only students with intellectual disabilities in other Gwinnett County high schools. With a LEGO League of their own, the Dancing Bears and other Gwinnett County teams can compete in the state competition. Jenkins said she’s sparked interest in a handful of schools including as Peachtree Ridge, Mill Creek and Grayson high schools. The challenge is not in finding interest, but introducing teachers to the technical aspects of programming.

That interest comes naturally to Jenkins, but she’s working on her pitch to other special education teachers. Jenkins also sponsors Mountain View’s robotics team, and some of those students train and teach her students on how to complete the LEGO challenges. She thinks that model is replicable at other schools.

LEGO League introduced the Dancing Bears to the real-life problem solving aspect of the project. The Dancing Bears gave a presentation to judges in which they recommended a sensory room at the Mall of Georgia as therapy for students who can sometime become overwhelmed.

Their project was already commended before they presented it to judges. The class submitted their project to the office of Gov. Brian Kemp, who provided them a framed commendation that hangs on Jenkins’ wall.

Jenkins said her students aren’t the only ones learning something from their LEGO League success.

“I think it’s great for them, but also great for everybody else to see what these kids are capable of,” Jenkins said.

The US keeps millions of chickens in secret farms to make flu vaccines. But their eggs won't work for coronavirus