Log In Sign Up
You are the owner of this article.
Edit Article Add New Article
You have permission to edit this article.
Edit
Home
News
e-Edition
Sports
Entertainment
Opinion
Obituaries
Community
Multimedia
Marketplace
Help
BusinessCitiesCrimeEducationHealthNationalPolitics
1 of 14 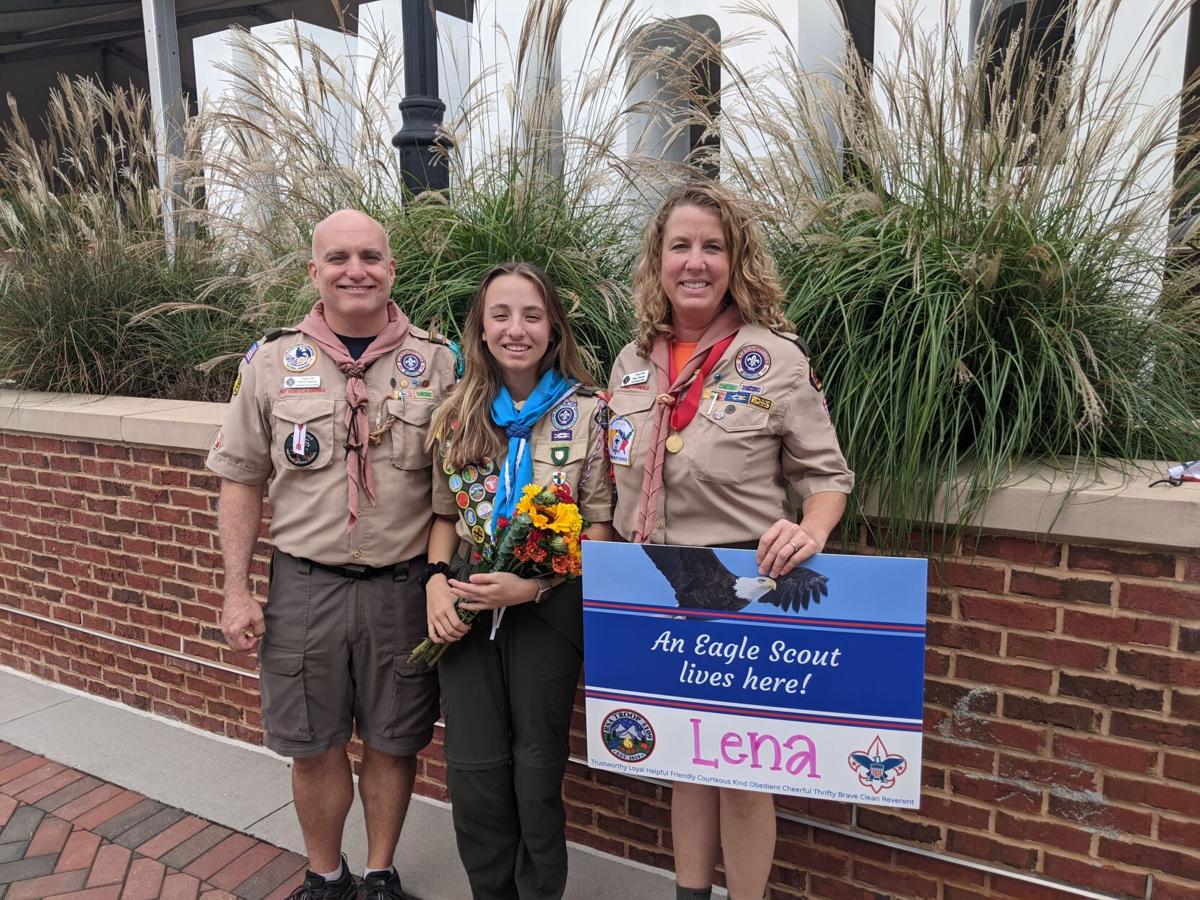 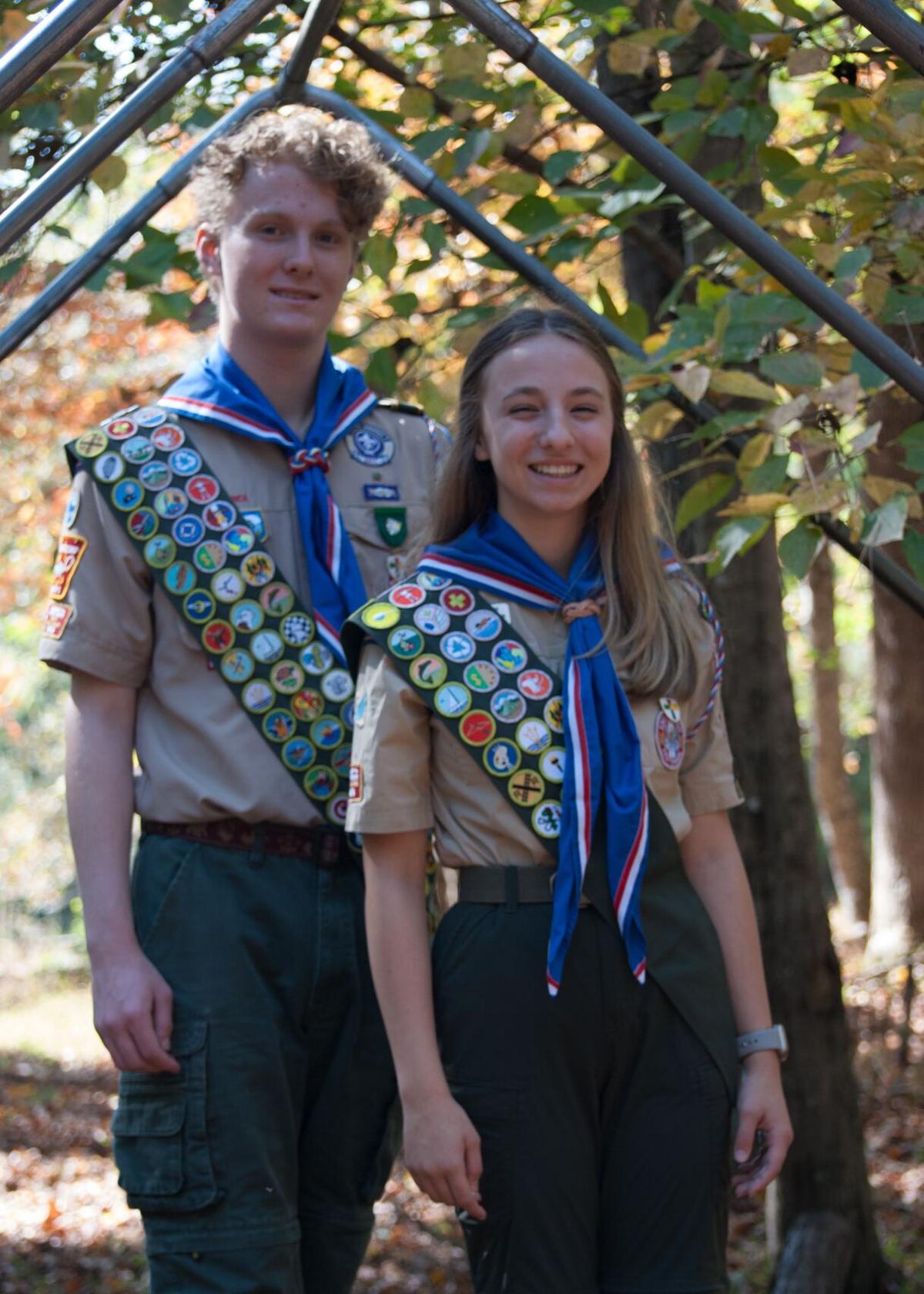 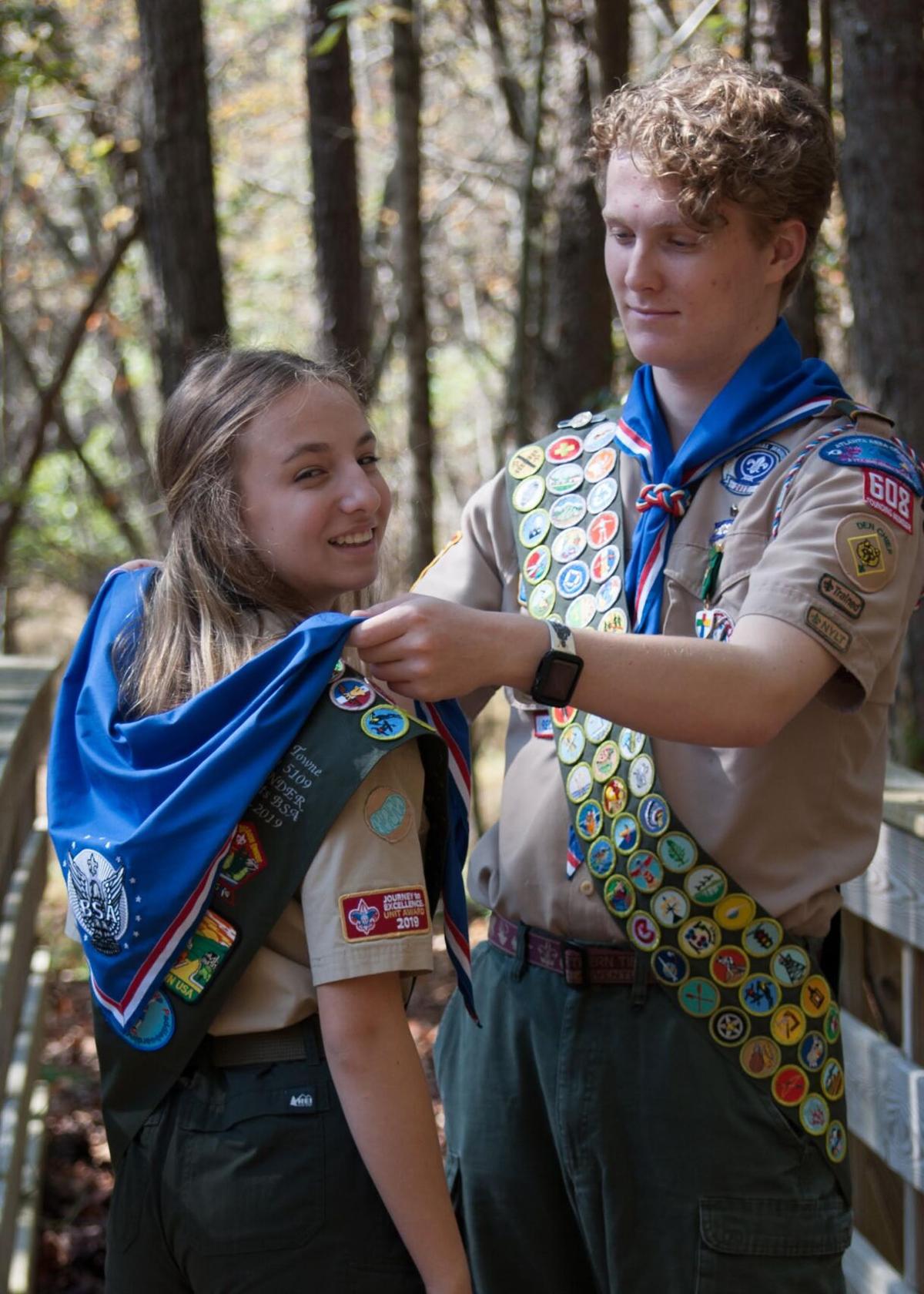 Above: A before and after of Lena Towne’s Eagle project. Left: Siblings Jack and Lena Towne. 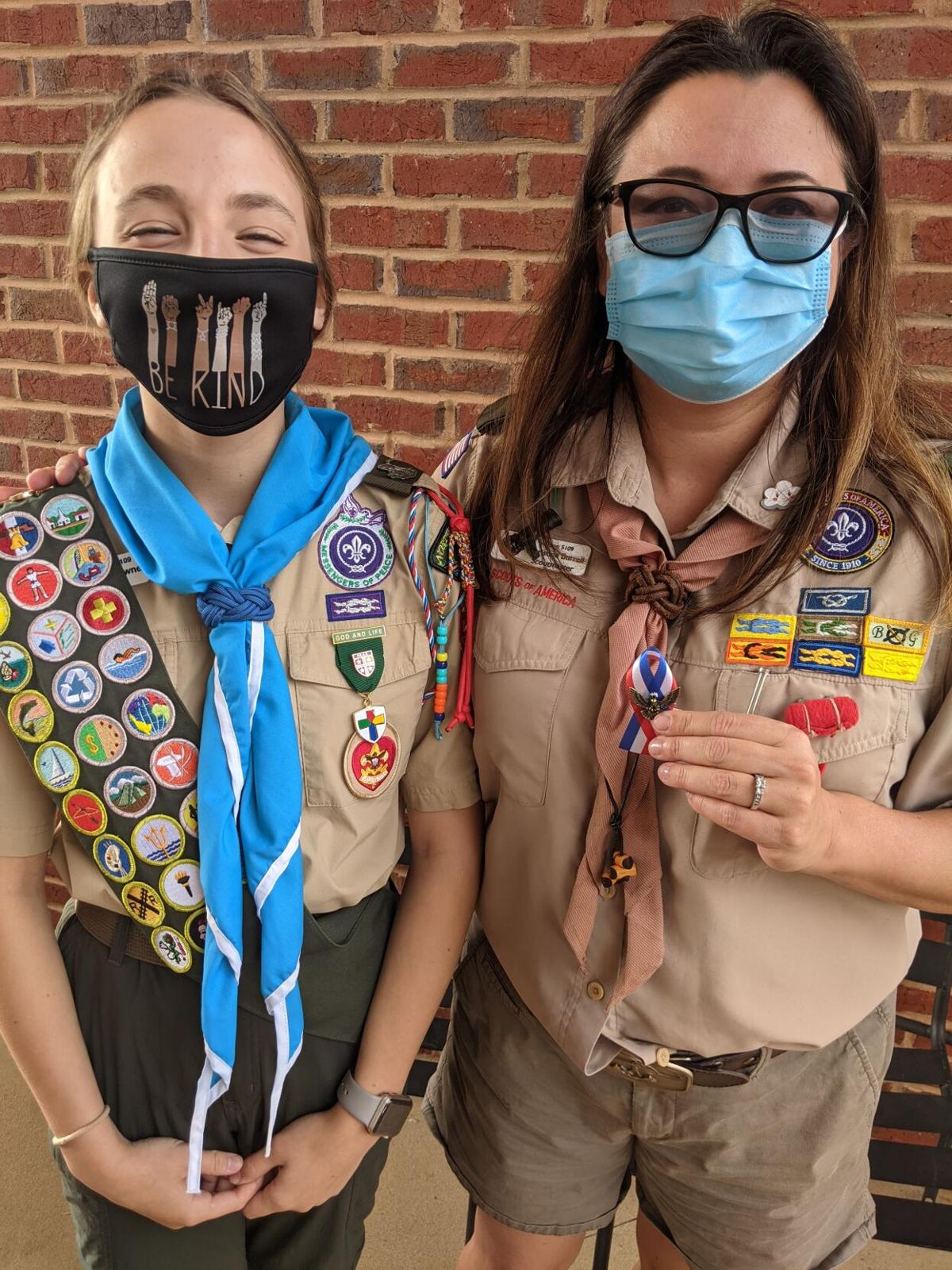 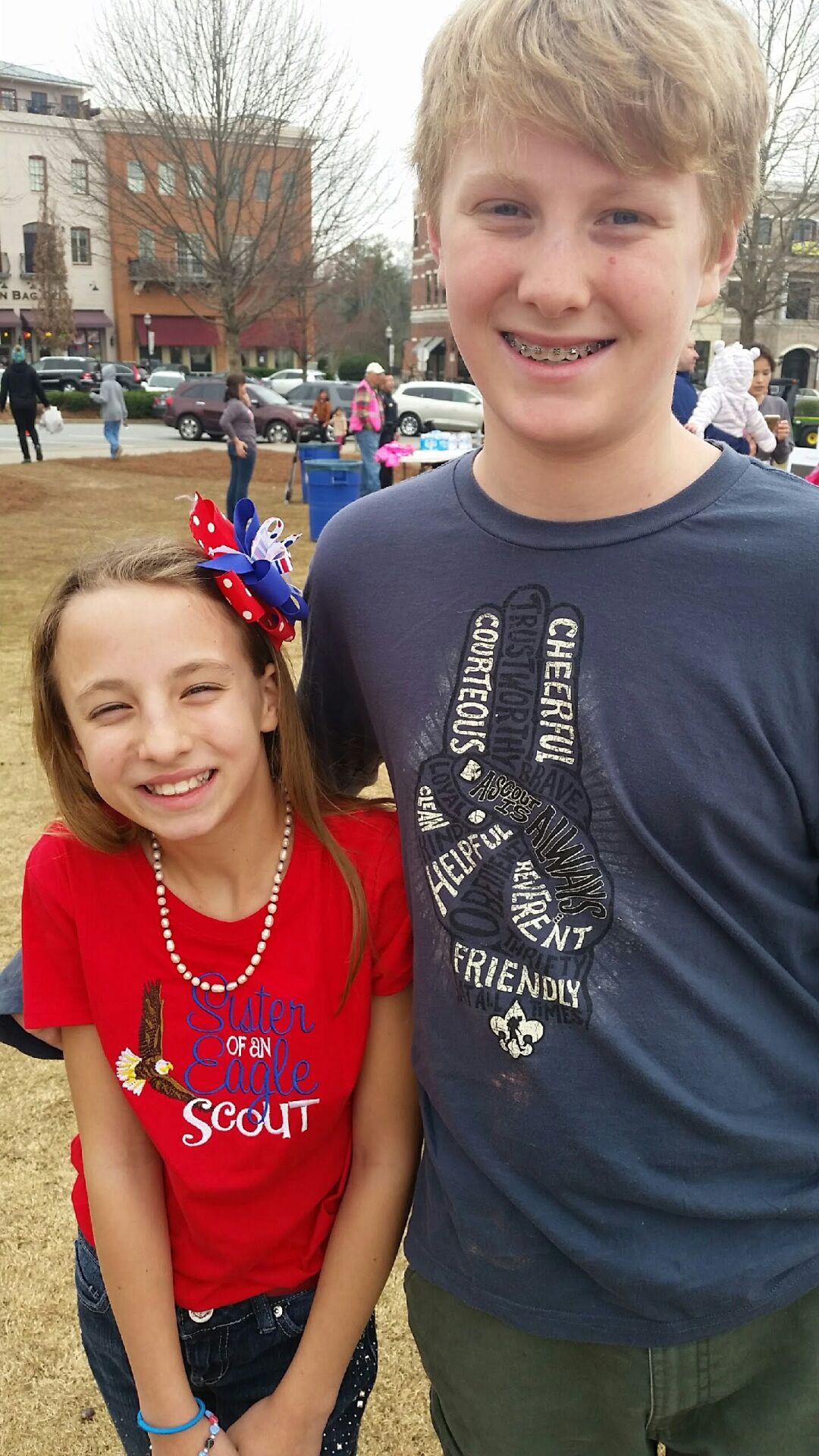 In the photo, seventh-grader Lena Towne stands next to her Eagle Scout brother, Jack. She’s smiling and wearing a shirt that says, “Sister of an Eagle Scout.” 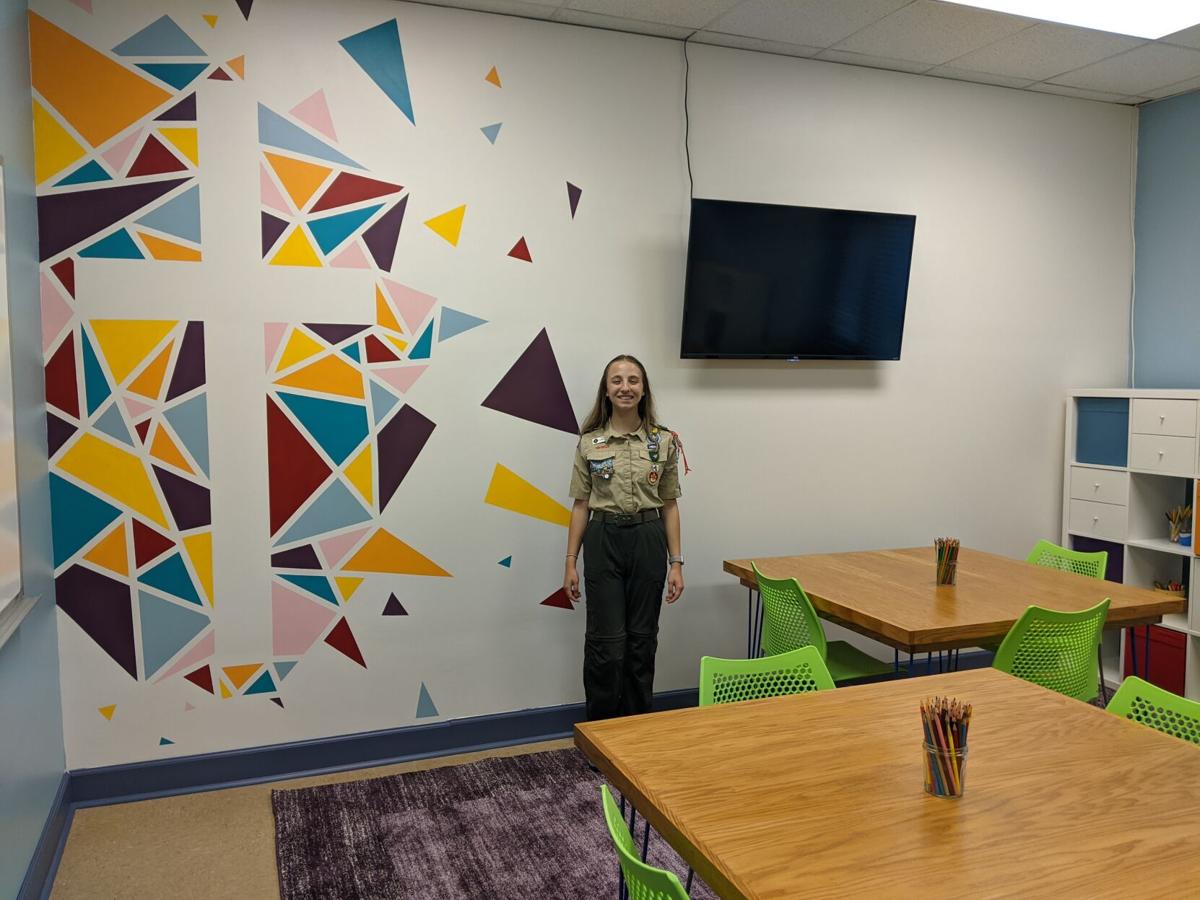 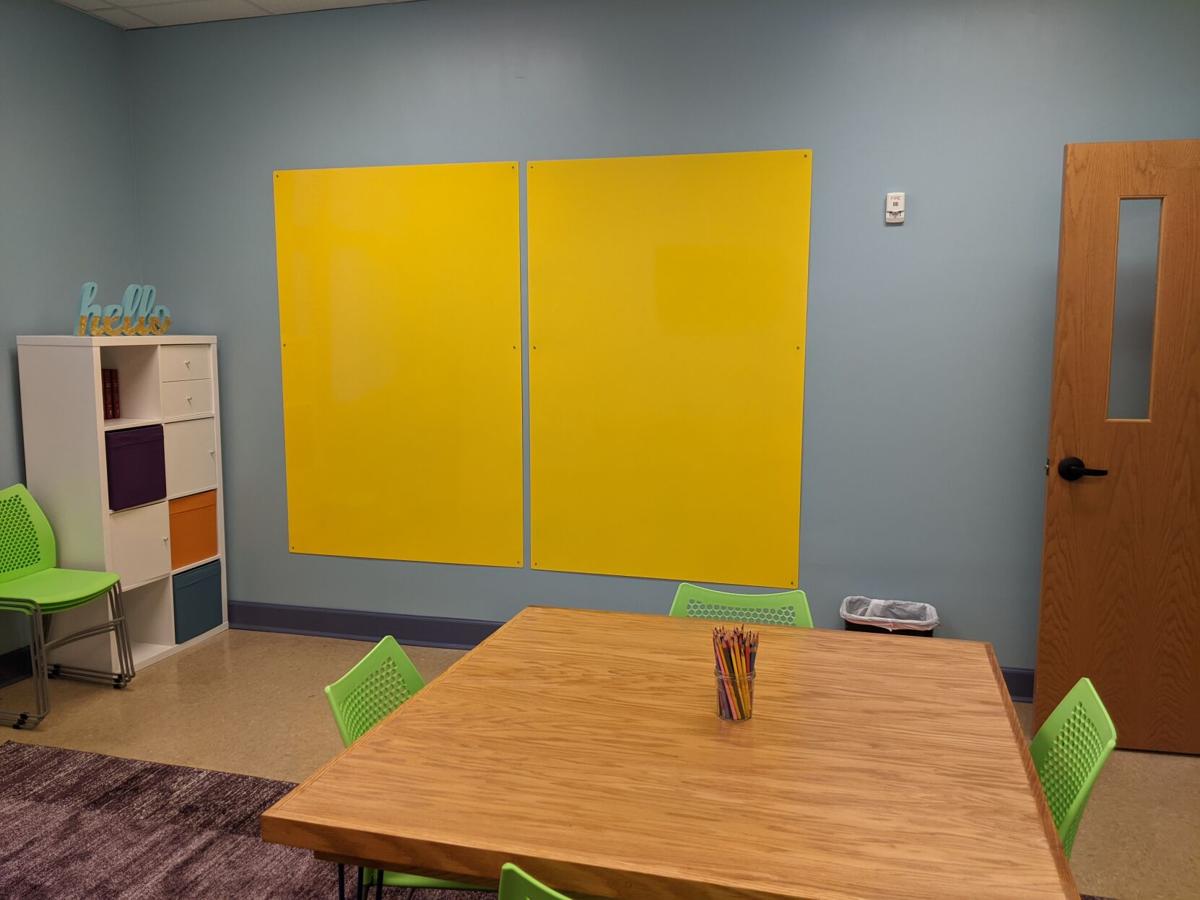 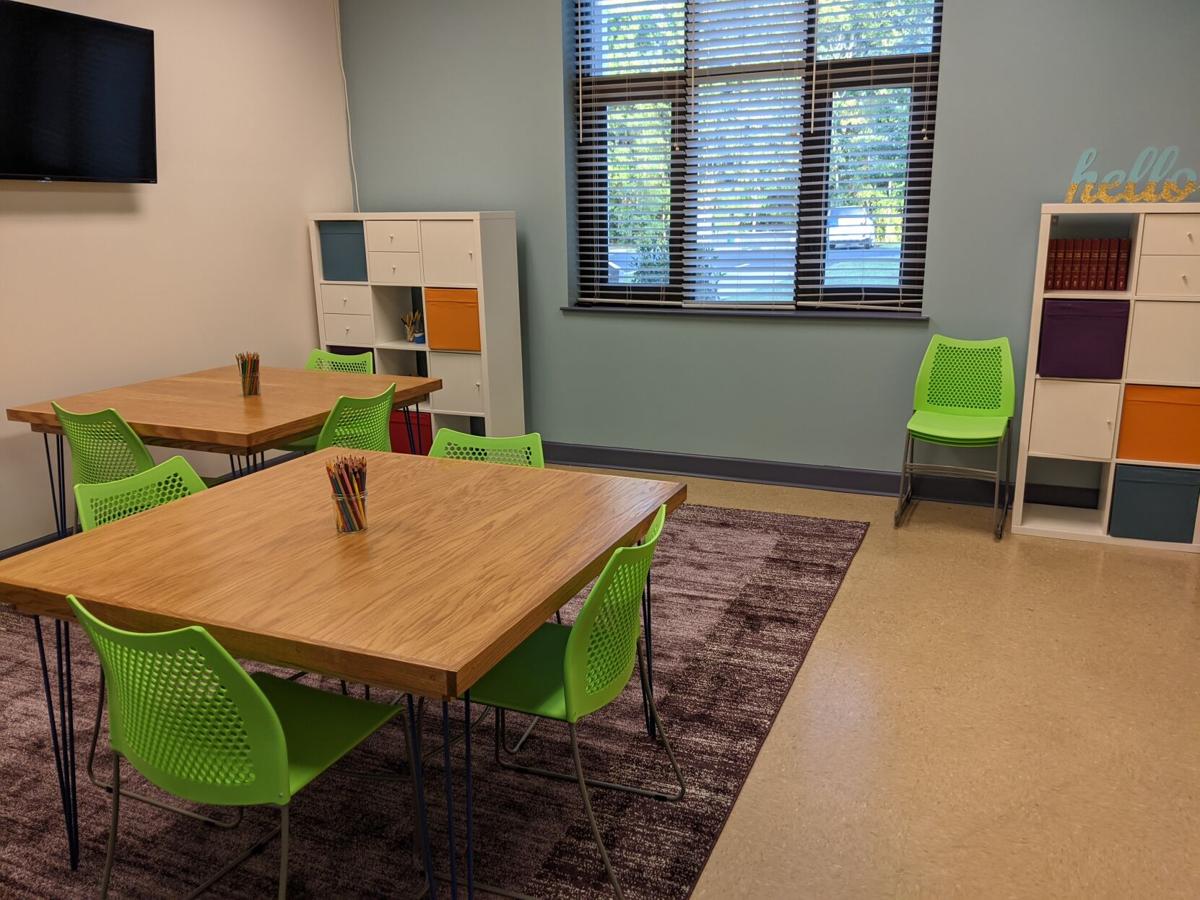 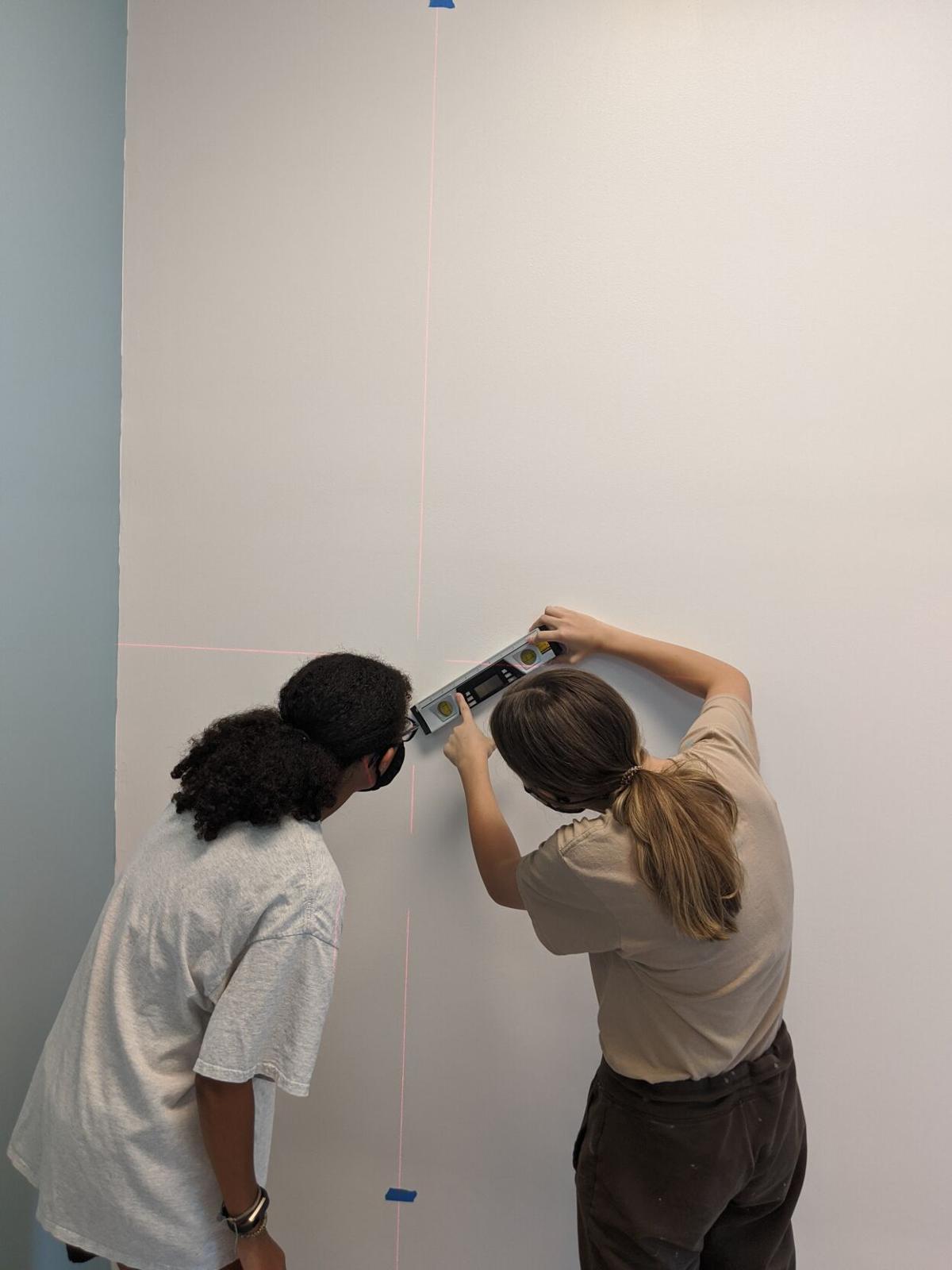 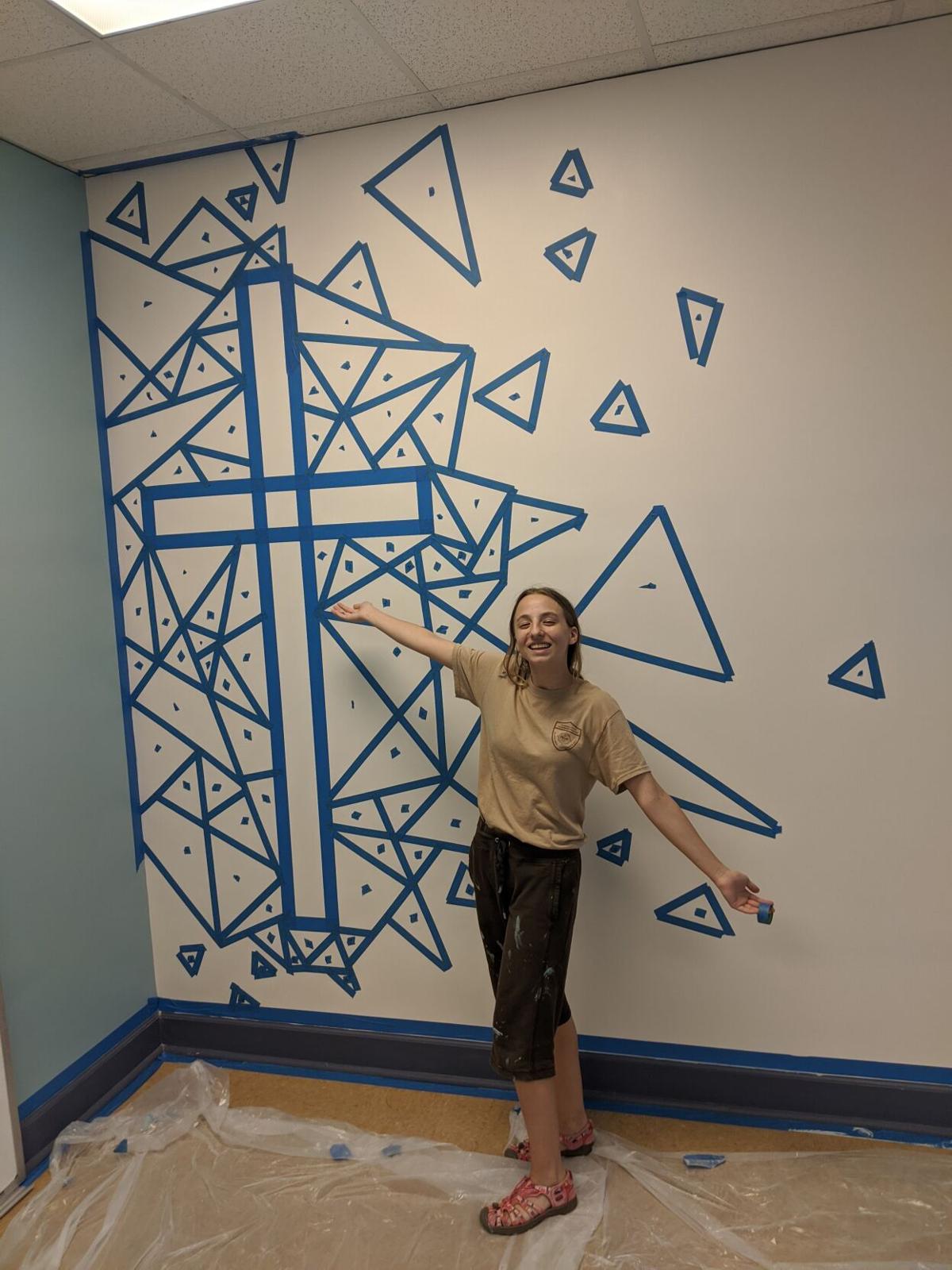 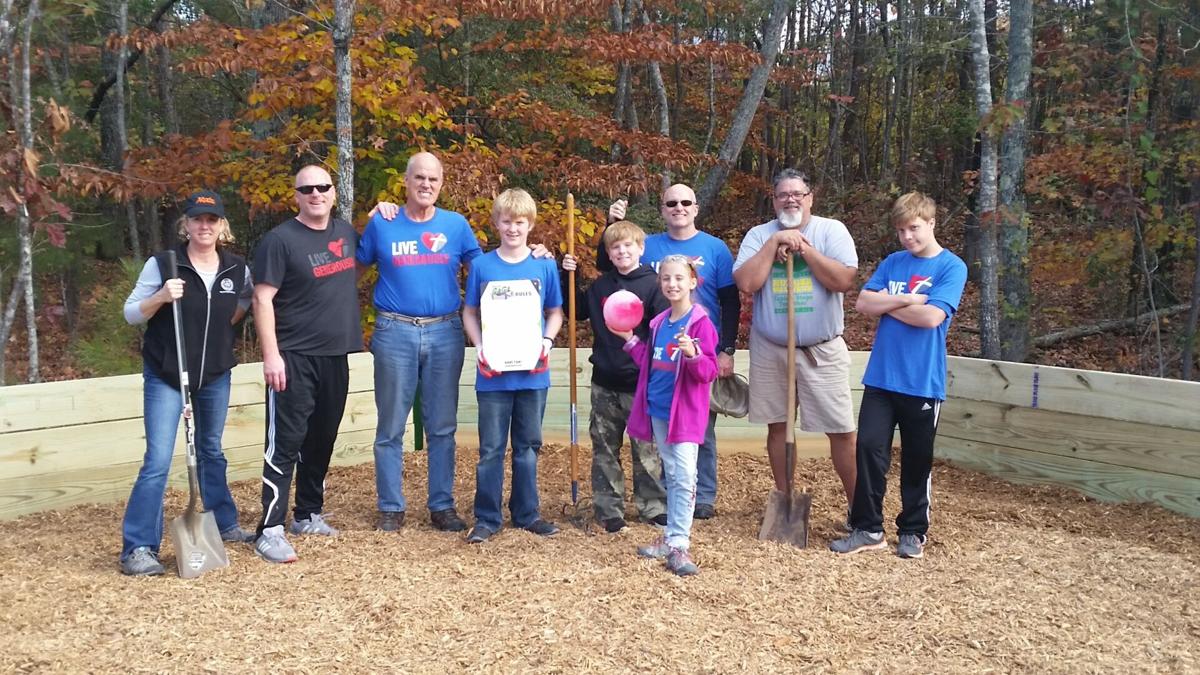 Lena Towne helps her brother complete his own Eagle Scout project four years ago, which is a GaGa Ball Pit at Epiphany Lutheran Church. 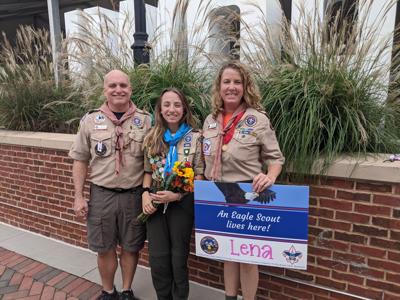 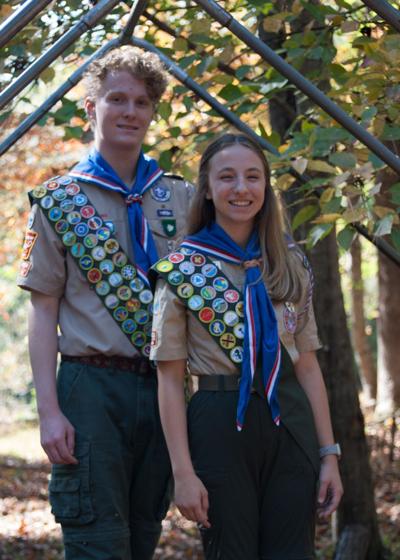 Above: A before and after of Lena Towne’s Eagle project. Left: Siblings Jack and Lena Towne.

In the photo, seventh-grader Lena Towne stands next to her Eagle Scout brother, Jack. She’s smiling and wearing a shirt that says, “Sister of an Eagle Scout.”

Lena Towne helps her brother complete his own Eagle Scout project four years ago, which is a GaGa Ball Pit at Epiphany Lutheran Church.

For the 110 years that Boy Scouts of America has been around, it wasn’t until Feb. 1, 2019 that girls such as Suwanee resident Lena Towne could work toward and earn the rank of Eagle Scout.

At 15 years old, she had been doing many of the same activities growing up as her big brother, Jack. She went to activities such as campouts with him when he was a Cub Scout, and even helped him complete his Eagle project later on. But she never earned credit or badges for her work.

Lena Towne is now one of the first female Eagle Scouts in the country after her mother, Kim Towne, helped found Scouts BSA Troop 5109 last year, an all-female troop chartered to Buford Presbyterian Church. The troop is made up of 21 girls, four of whom are currently working on Eagle Scout projects. Kim Towne said its membership has doubled since it was started.

President Donald Trump shattered conventions when he took office. Stacker looks at how America is not the same four years later.  Click for more.

“Probably one of my favorite parts about getting this far is getting to encourage all the other Scouts and especially giving the younger girls and Cub Scouts someone to look up to,” Lena Towne said.

“It’s very important to me for them to have a role model or to have somebody who shows them these are things that we can do, because that’s something that’s been very important to me is seeing all these strong people around me, especially women, who are achieving such great things and doing such amazing things for me and for this troop. I’m just very happy that I get to be that someone for another girl.”

Scouting is a whole family activity for the Townes. Lena Towne, who is on the national advising board for BSA, joins both her brother and her grandfather as Eagle Scouts. Her father, Chris Towne, is also an Assistant Scoutmaster at Troop 5109 and Troop 608, and Kim Towne is the Committee Chair at Troop 5109.

Years ago, Kim Towne, who is also the events coordinator for the city of Suwanee, started Troop 608 after noticing there was no troop in Suwanee. She said it was a passion of hers to make sure Suwanee was represented as a city on the roster of troops.

So in late 2018, when BSA announced plans to allow all-girl troops to form nationwide, she was among the first to take action. The troop selected the number 5109 to represent 109 years of Scouting as of that date.

“My daughter lit up when she heard that,” Kim Towne said. “When your daughter looks at you and says, ‘Mom you’re so good at this. Can you please start a troop for my friends and I?’ I couldn’t say no.”

Lena Towne earned the rank of Eagle Scout on Oct. 24 after earning more than 25 merit badges, holding multiple leadership roles, and leading a large-scale project to renovate the Sunday School room at her home church, Epiphany Lutheran. Her Eagle project included painting a mural, crafting several furniture pieces, and adding storage and seating to the room.

“Painting the mural and then seeing the final installation of all of the pieces of hand-built furniture were the most rewarding parts of my project,” Lena Towne said, regarding her Eagle project that required over 230 hours and two dozen volunteers to complete. “These rooms are used for the activities of three Scout troops, as well as Sunday school; it makes me proud that many people will enjoy and benefit from our hard work.”

“What I love most is how it brings people together: from the financial support from a family at our Vacation Bible School, to the donation of time and talent from the volunteers, as well as an in-kind donation from a local business,” he said. “This is a project that will impact others for years to come.”

Lena Towne said she is very proud of all her work looking back. It’s especially cool, she said, because her brother’s Eagle project, a GaGa Ball Pit, is also located at Epiphany Lutheran. But while the journey to Eagle is a challenging one for all, it was especially so for Lena Towne.

Just two months before Troop 5109 was to kick off its official chartering, Lena Towne was diagnosed with scoliosis that required her to wear a cumbersome and restrictive torso brace for 23 hours a day.

“The diagnosis was initially really devastating,” Lena Towne said, “but I immediately talked to my troop leaders and my fellow patrol members about it, and showed them how my brace works and when I would need help. They were kind and supportive.”

She was still able to complete dozens of camping nights, hikes and other outdoor activities, including a trip to West Point Military Academy in New York for a challenging hike and camping weekend.

A North Gwinnett High School sophomore with a 4.0 GPA, Lena Towne is also actively involved in local theater, community service and Girl Scouts. In addition to attaining the rank of Eagle, she has also earned the prestigious Four Star Award for religion.

She will be recognized officially by BSA as part of the inaugural class of female Eagle Scouts on Feb. 8, 2021, which is the official BSA founding date. Because of their unprecedented nature, Troop 5109 was also featured in two editions of “Scouting,” the national magazine of the Boy Scouts of America.

Kim Towne said she is humbled by everything she and her daughter have accomplished.

“I’m so proud of the work that we’ve done and the opportunities that we give these girls,” Kim Towne said, choking back tears. “Because I always think someday these girls are going to look back on these experiences and I may never hear a thank you and I may never see them again, but we made that happen. There’s things that they get to do that you just don’t get from other school activities or sports. I’m one of those people that when you look around and say, ‘Someone should do that,’ I usually raise my hand.”

For the 110 years that Boy Scouts of America has been around, it wasn’t until Feb. 1, 2019 that girls like Suwanee resident Lena Towne could w…