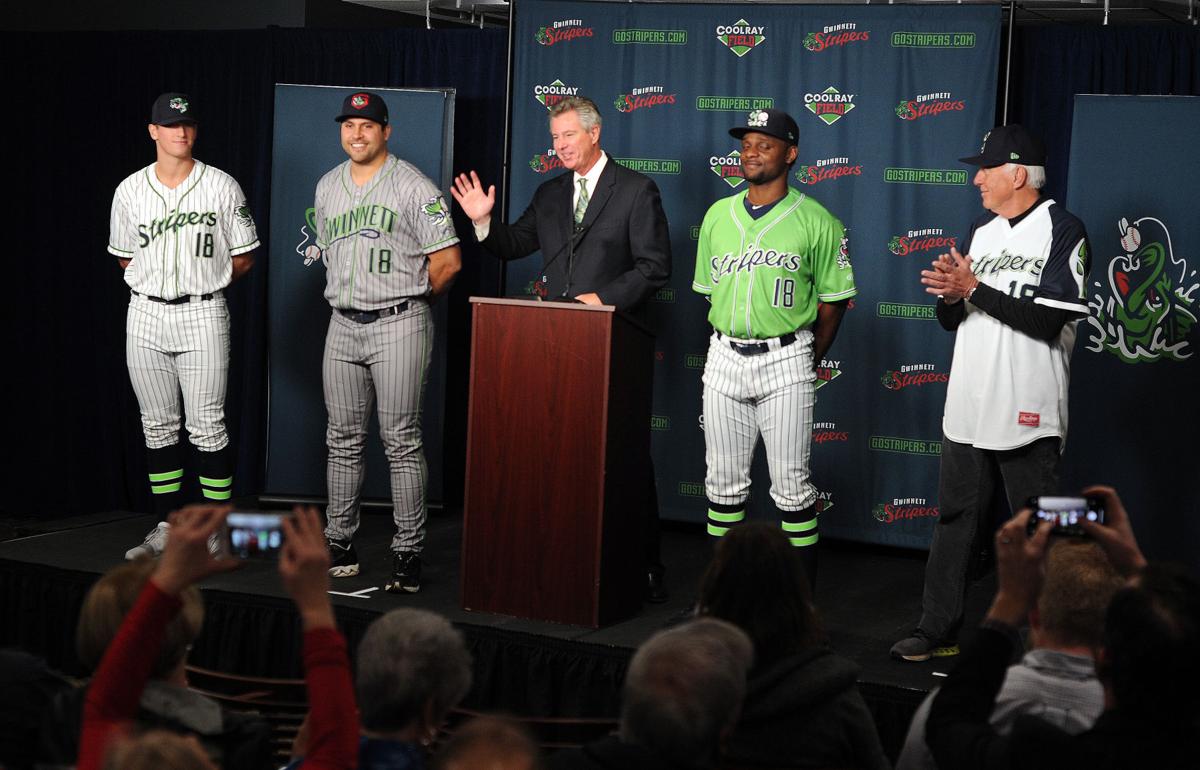 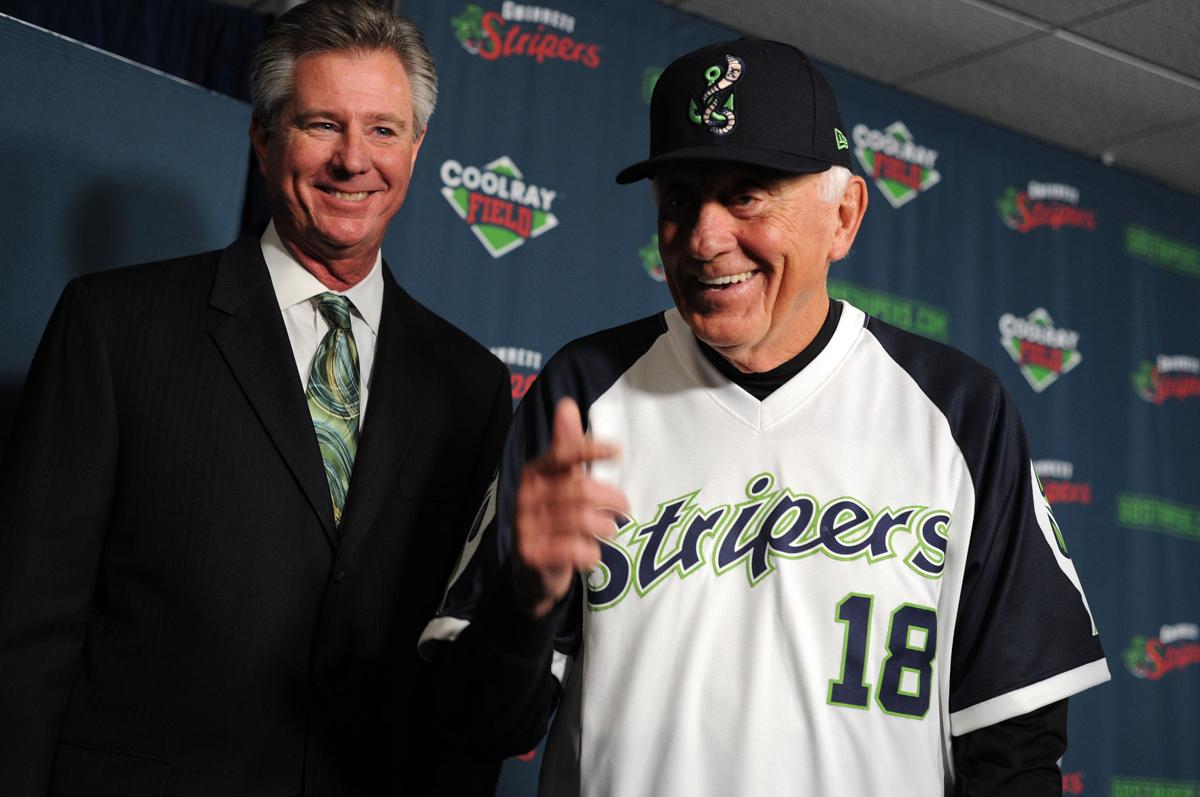 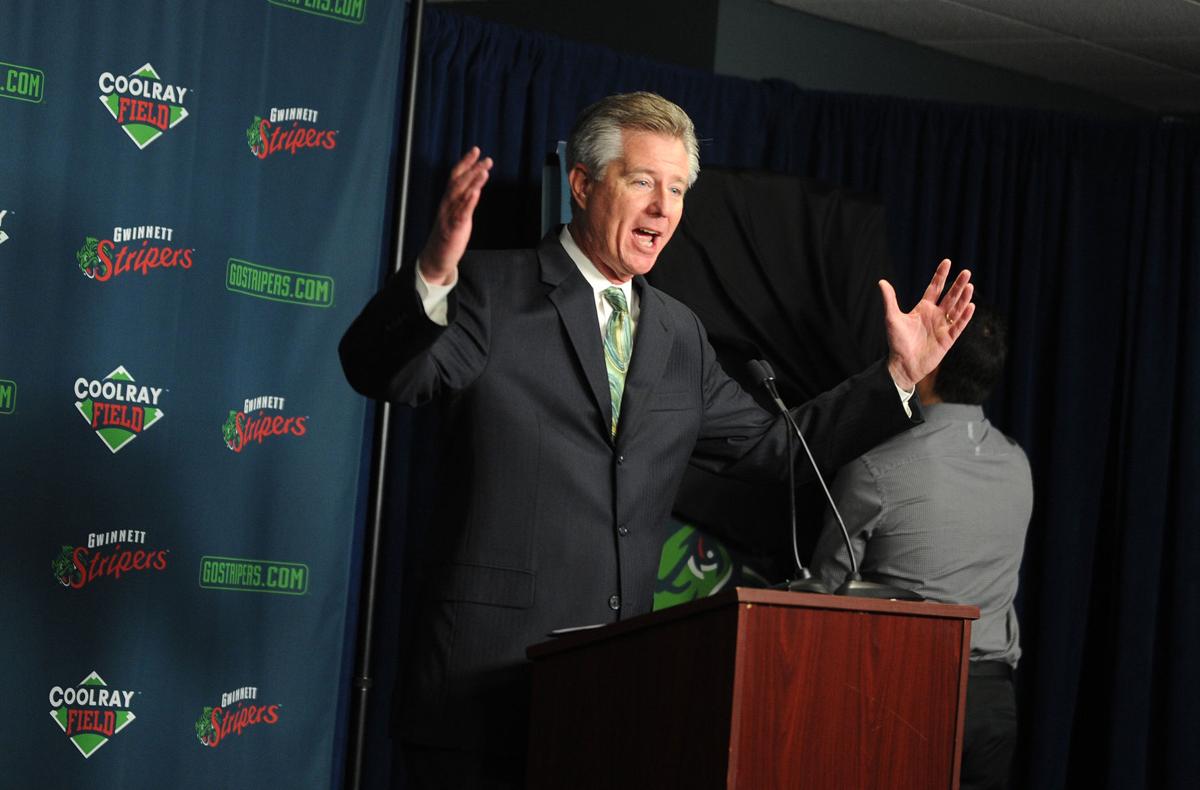 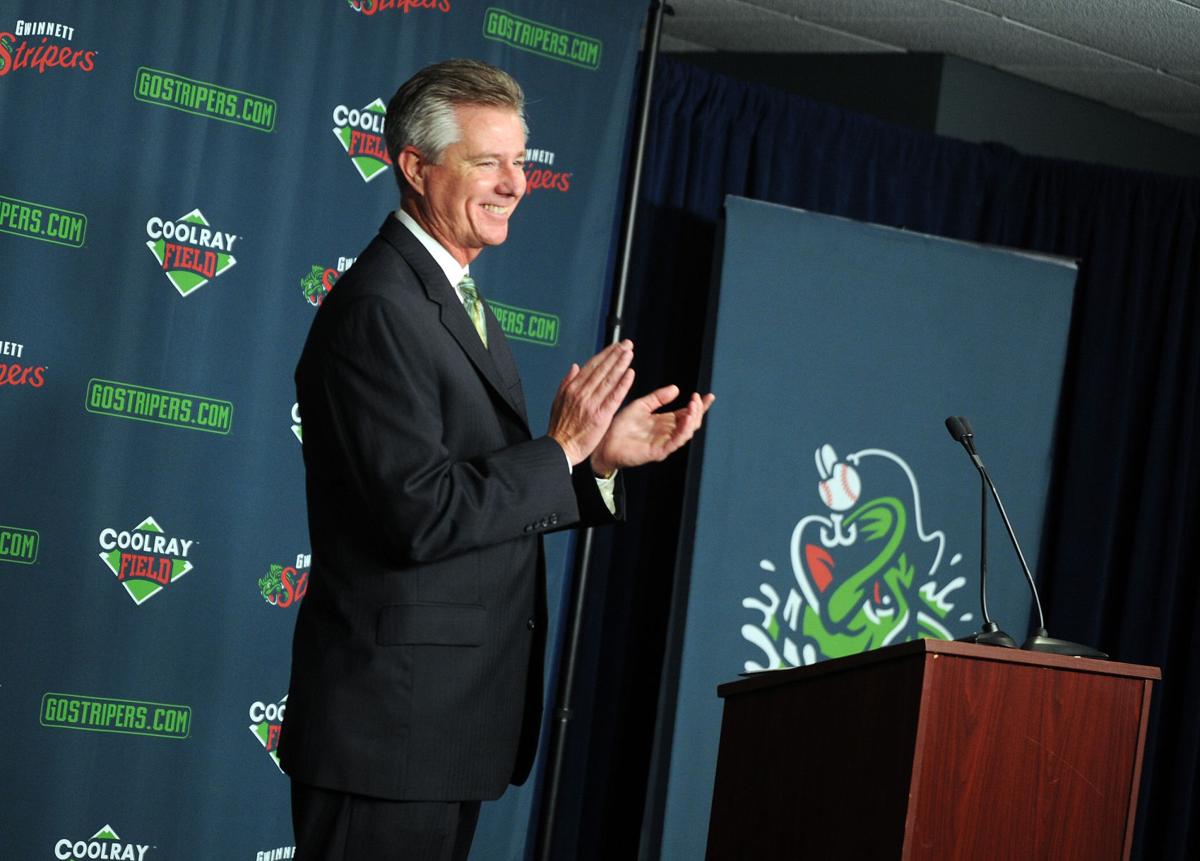 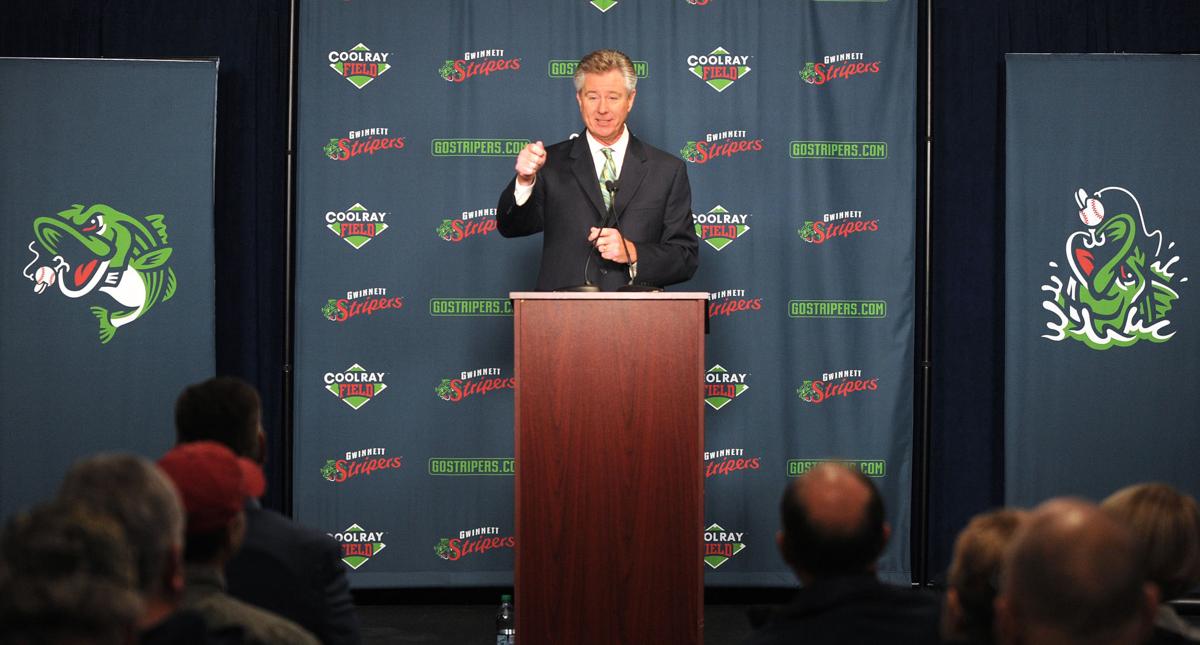 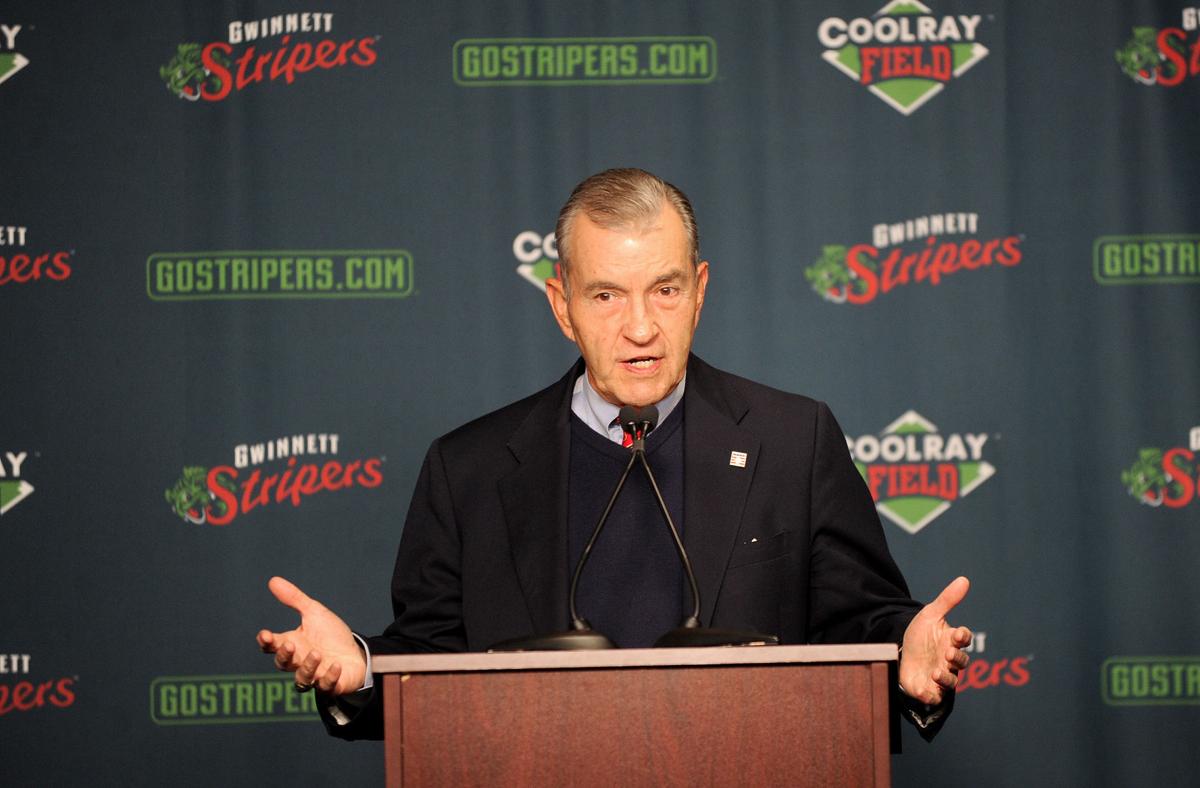 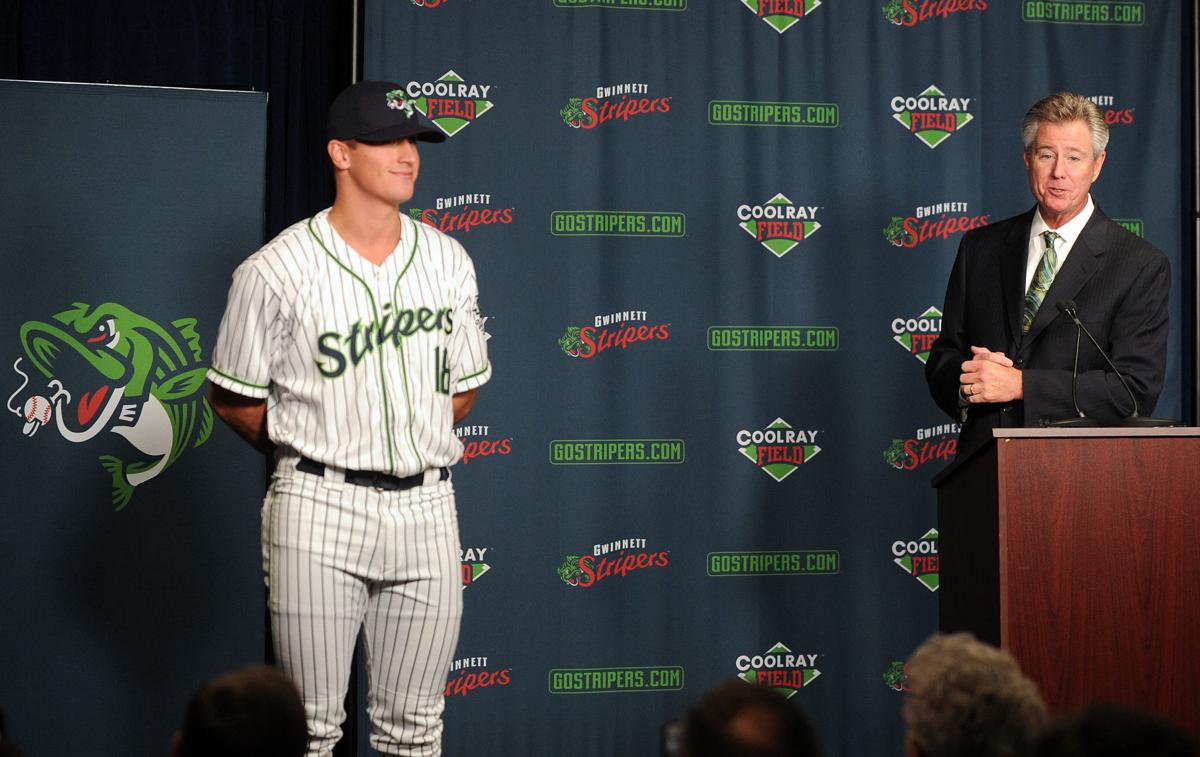 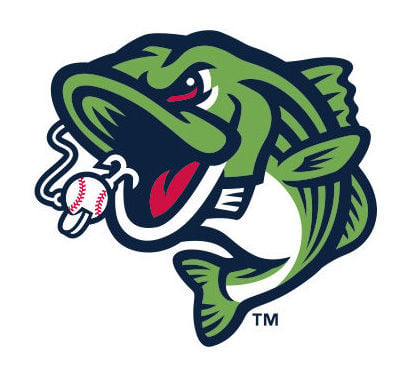 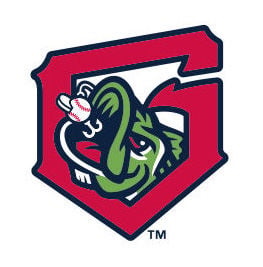 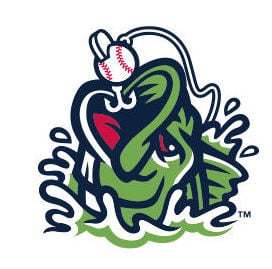 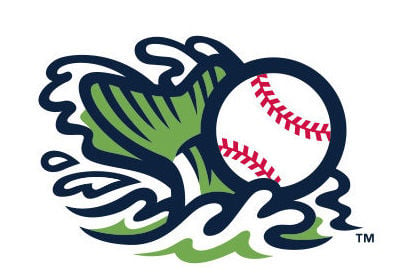 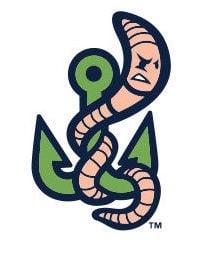 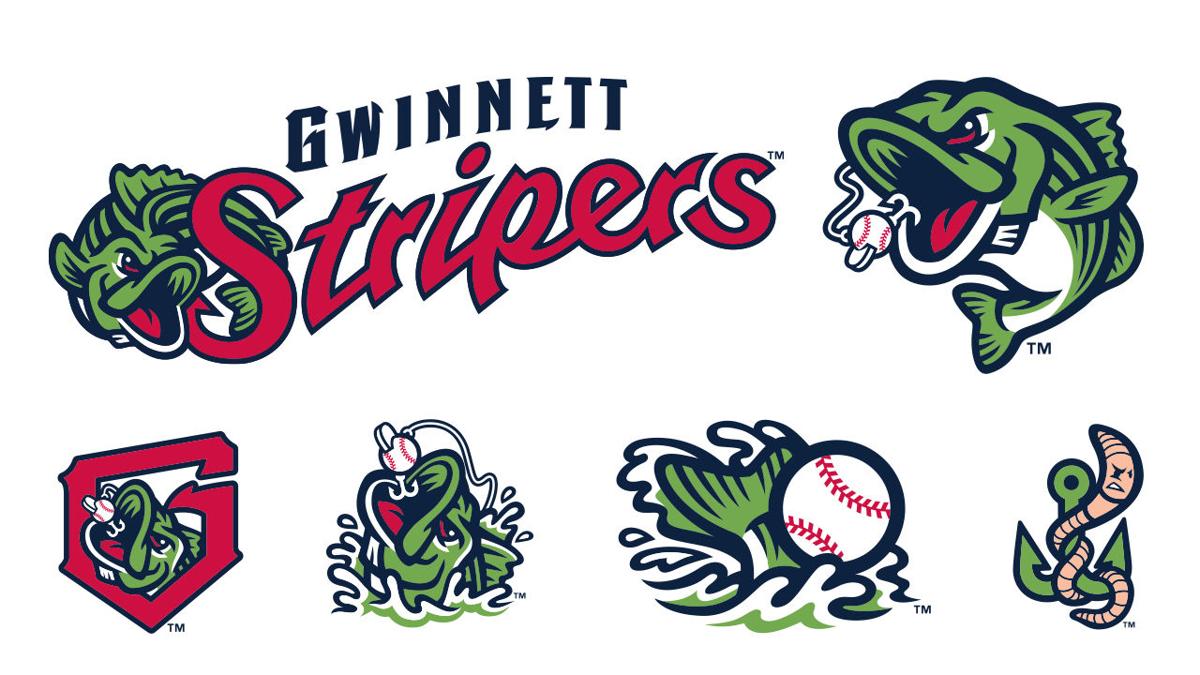 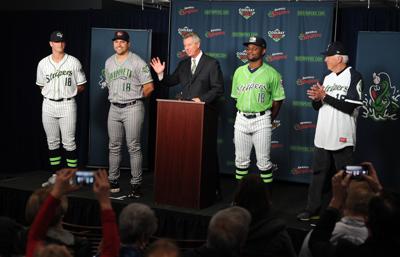 Photos from the Gwinnett Stripers announcement and each logo.

The Triple-A baseball team formally known as the Gwinnett Braves threw fans a curveball Friday morning. Its new name isn’t one of the six finalists fans voted on earlier this year.

Instead, the Atlanta Braves affiliate will be called the Gwinnett Stripers, an homage to the striped bass that abound at nearby Lake Lanier.

The name is a variation of Gwinnett Big Mouths, one of the name-the-team finalists. Team officials liked Big Mouths, but didn’t like the way it sounded.

From those discussions, Stripers rose above other finalists such as Buttons, Gobblers, Hush Puppies, Lambchops and Sweet Teas.

“It’s a take off from big mouths,” said North Johnson, the team’s general manager. “The whole piece of that is we wanted a good, local tie-in. We wanted something indigenous to the area, something completely ours. There’s not another sports team named Stripers we’ve been been able to find. Ultimately, we loved the concept of Big Mouths. We just couldn’t grasp saying Big Mouths.

“We weren’t concerned with the connotation of Big Mouths, it just didn’t flow well. You try to say Big Mouths and it just doesn’t flow. … As soon as (Stripers) came out, everybody went, ‘Yeah, that makes sense.’ We did research on striped bass at Lake Lanier and found out Lake Lanier is one of the best striped bass places in the entire world. That just made sense.”

Dark blue will remain one of the team’s primary colors, as will a sea-green color it calls striper green. Red will be an accent color.

The uniform designs are, not surprisingly, striped. There also is a retro jersey patterned after the 1970s Atlanta Braves jerseys, like the one worn when Hank Aaron hit his record-breaking 715th career home run in 1974.

The coming days and weeks will determine how the public likes the team’s new direction. Its initial decision to change the name, as well as its finalists, were slammed on social media, but the Stripers name didn’t reach the public until Friday.

“Obviously, we’re very realistic,” Johnson said of the potential feedback. “We haven’t heard anything we didn’t expect so far. The great thing about working with (marketing company) Brandiose is they coached us up pretty good and they’ve been absolutely right every step of the way. I think the reaction will be what it’s been. There will be that loud negative play on social media but then there are going to be folks that take the time to look at it, see the name, see how fun it is and embrace it.”

The G-Braves changed names to eliminate market confusion between the Atlanta Braves, but also to spark interest and attendance. The initial push of merchandise sales is nice, but that didn’t factor into the decision, Johnson said.

“Every business out there is trying to garner more customers,” Johnson said. “We’re not trying to trick anybody to think this is anything other than it is. We’re trying to generate more business for our operation.”

The change wasn’t cheap, either, according to Johnson. In addition to money already spent, the club must replace signage all over the park, from the large neon signs to smaller ones that guide fans around Coolray Field or direct them where to park. There is also furniture to replace in the Home Plate Club and suite levels, though those costs will be offset some by season-ticket holders who already have purchased some G-Braves tables and chairs as souvenirs.

“It’s unbelievable the number, in quantity of thing we have to replace and the cost,” Johnson said. “I think that’s the part that folks who were railing on us don’t understand. It’s truly a big financial commitment to make this happen. … You almost don’t realize how much of it is out there to change until you start looking ta it. The number is significant.”

Friday marked the public conclusion to a long process that began in May, when the team initially announced the plan and its name-the-team contest. Johnson had pushed for a name change for years, so he was happy to see it come to fruition.

The process had its ups and downs, but he was pleased with how it finished up.

“It was fun, first and foremost,” Johnson said. “It’s been a long time coming. It’s something I’ve wanted to do for a long time. Hopefully, everybody understands we are creating our own identity. Brandiose literally gave us a cheat sheet for when and where something was going to happen along the way. That said, I don’t think you ever prepare for the harsh comments from people you think are your fans or friends. That was more disappointing than anything else. People you know or see on a nightly basis. They won’t tell it to your face, but they put it out there on social media.

“The whole process of making sure we’re getting it right was a big burden. There were six to eight of us working on this and we had those internal conversations and we walked through every scenario. I think we’ve done a really good job checking all the boxes. There are always frustrations in everything you do, especially something of this magnitude. But they pale in comparison to the good things that have come out of this.”