The law legalizes hemp that has a concentration of 0.3% THC or less, while anything above that concentration is still prohibited from recreational use.

The issue for police, however, arises from the current methods of testing and the inability to differ between legal hemp and illegal marijuana, Gwinnett County Police Department Sgt. Jake Smith said. 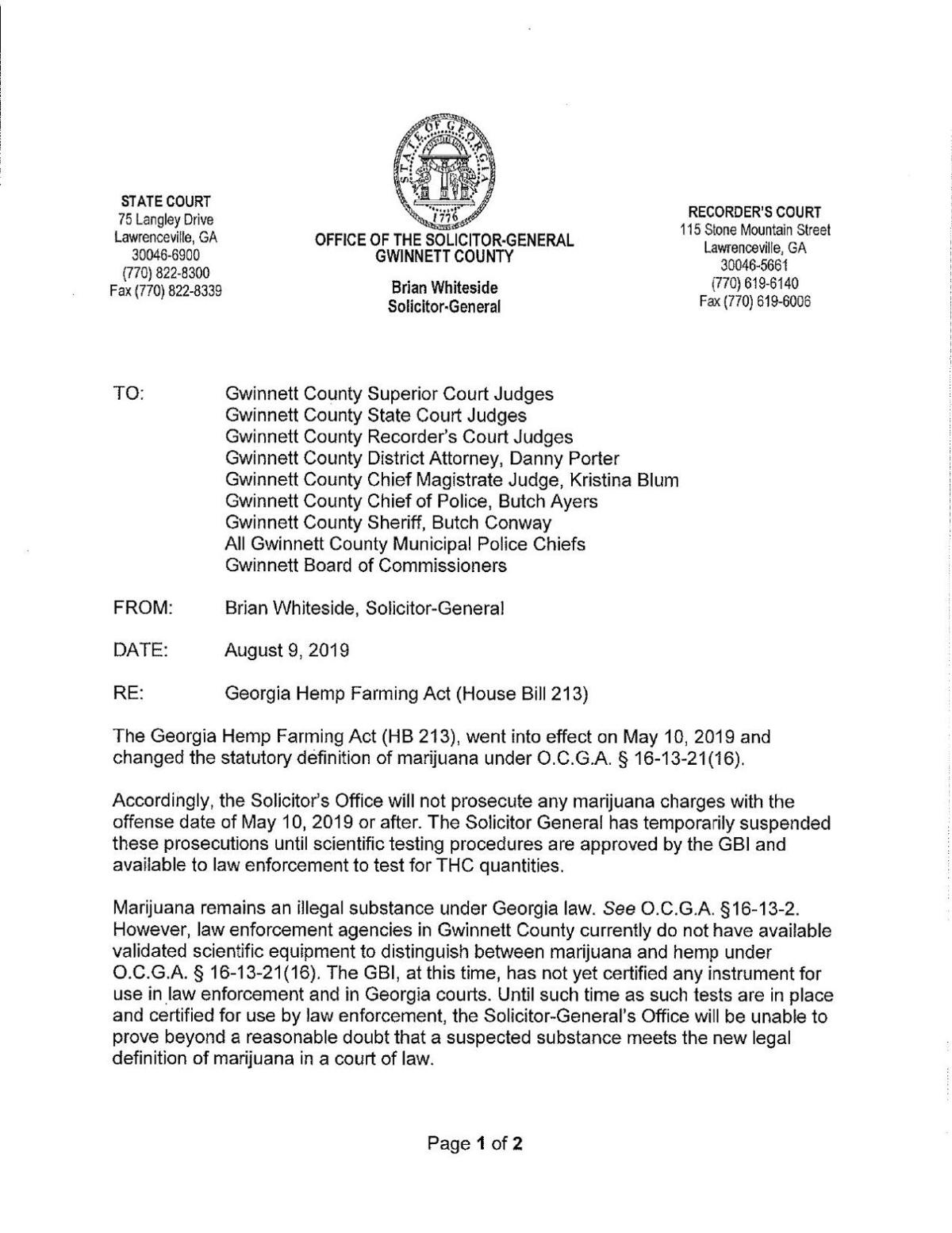 “They are identical by smell and sight, even under a microscope,” Smith said. “The testing methods currently used by the GCPD and (Georgia Bureau of Investigation) crime labs only test for the presence of THC and not for the concentration of THC. There is currently not a court-acceptable test that can differentiate between hemp and marijuana. The GBI is researching methods and technologies to address this issue.”

“Effective immediately, the Gwinnett County Police Department will not make custodial arrests or issue citations for crimes related to misdemeanor amounts of marijuana,” Smith said. “GCPD will still pursue crimes related to felony amounts of marijuana; those cases will be reviewed by the Gwinnett County District Attorney’s Office on a case-by-case basis.”

The Gwinnett County Police Department is not the only local agency to suspend arrests and citations indefinitely; Lilburn Police Chief Bruce Hedley told the Daily Post his department will “only pursue felony amounts at this time.”

Norcross Police Department Chief Bill Grogan took that one step further, telling officers in an email, “until further notice, do not charge anyone with possession of marijuana.”

“The DA’s office has said they will prosecute felony amounts the same as always, but I believe we are better off not doing that until we can send the suspected felony amount to the GBI for testing, receive return results and charge the person at a later date,” the email, sent Friday, said. “Confiscate (marijuana), get positive ID on who it belongs to, do a report, put it into property/evidence, but no charges, misdemeanor or felony, will be made at this time.”

Grogan said Monday that command staff will be amending the email to say that Norcross police will not, in fact, be seizing any misdemeanor amounts of marijuana until further notice. Felony amounts will still be seized.

The email also warned officers not to use the smell of marijuana as their sole probable cause to search a vehicle or person.

“Again, hemp smells the same, so consent or other means will be necessary,” Grogan said.

Snellville Police Chief Roy Whitehead said his department will “follow the directions received from the Solicitor and the District Attorney’s Office. We will prosecute felony cases and other legally justified violations.”

Suwanee police will also not charge for misdemeanor possession, nor will the Gwinnett County Sheriff’s Office.

“If a large quantity of what would appear to be marijuana and would normally be charged as a felony is present, officers will continue to affect an arrest and obtain felony warrants for the defendant,” department spokesman Lt. Jake Parker said. “Until a new legislative remedy is decided and or test kits are obtained, this will be how we proceed with marijuana and hemp encounters.”

Whiteside said a memo to the county's judges, as well as District Attorney Danny Porter, Sheriff Butch Conway and Gwinnett commissioners this week to inform them of his decision not to prosecute the cases.

A new law that made cannabis or help plant farming legal in Georgia caused Gwinnett County Public Schools to make a change to its Student Conduct and Behavior Code.

The Feb. 29 lineup card for The Sports Page