The report from a review team looking into Gwinnett County Public Schools overall had good news for the district — GCPS will retain its accreditation. But it has also identified a couple of areas where improvements are needed by the county’s school board.

Cognia, the district’s accrediting agency, launched an investigation into GCPS’ accreditation in March after it received complaints about the district, which were mainly aimed at the school board. The team visited the school system in June to conduct interviews and to look into the allegations.

The results of that visit and investigation were released Monday afternoon.

“As a Board governance team and as a school district, we are accountable to our students, families, staff, and community,” Gwinnett County Public Schools Superintendent Calvin Watts said. “In Gwinnett County Public Schools, we believe accountability is a good thing. It shares with our stakeholders the progress we make toward fulfilling our responsibilities and meeting goals that we have set.

“We will use Cognia’s findings and recommendations to improve. We know that this commitment and work toward improvement will benefit the school district, which ultimately benefits our students, schools, and community.” 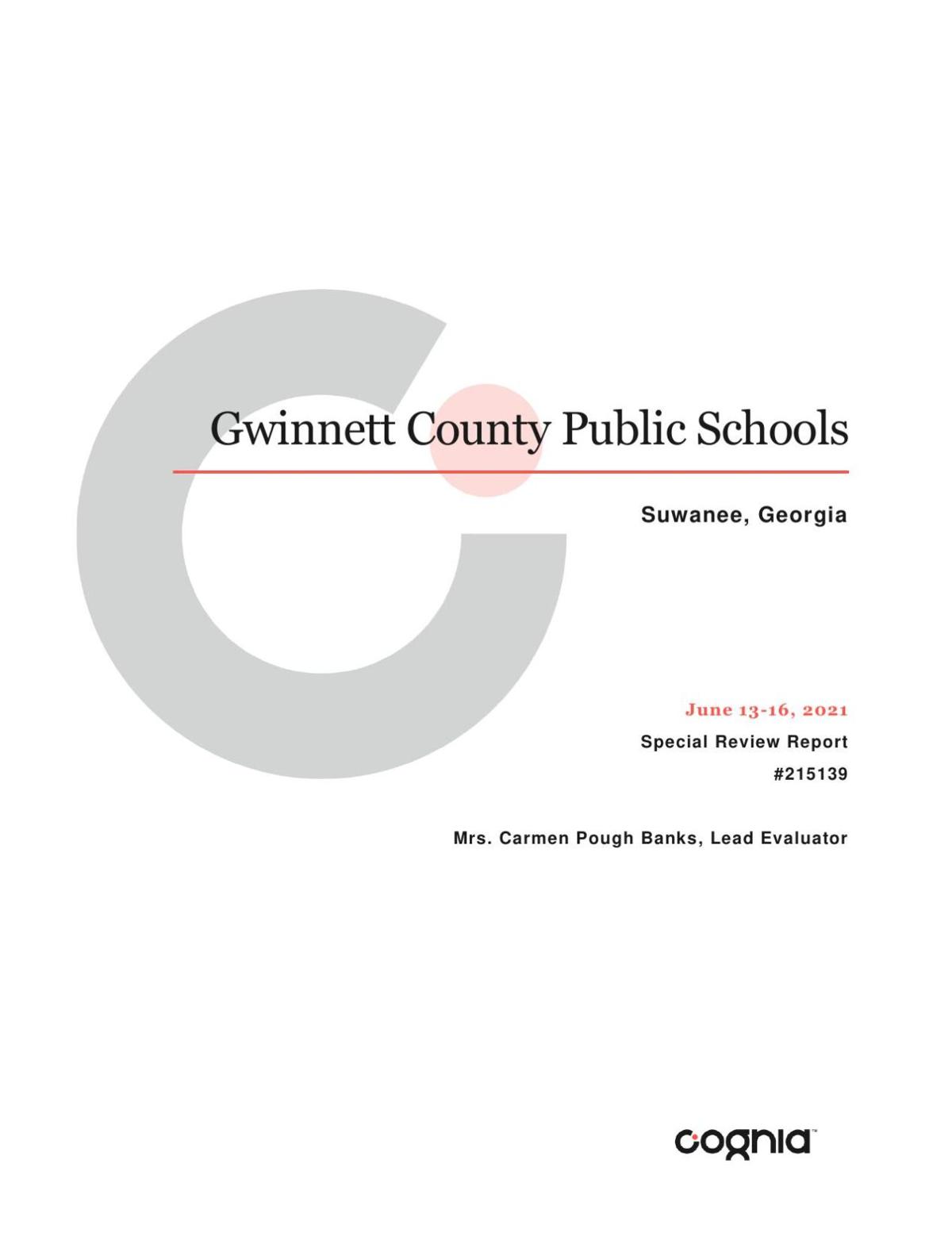 The district was found to meet the standards set by Cognia for three of its standards of accreditation, and exceeding a fourth standard dealing with the allocation of human, material and fiscal resources to meet GCPS’s needs and priorities concerning the improvement of student performance and organizational effectiveness.

There were just two standards the review team felt the district needed work in, and both of those categories were listed as being in the “initiating” phase.

The two areas where the review team felt improvements could be made are aimed at GCPS’ school board.

“Based on the findings of the Special Review Team, Cognia concludes that the district will retain its current Accredited status while it addresses the Recommendations, Directives, and Improvement Priorities outlined in this Special Review Report,” the review team wrote in its report.

“A Progress Monitoring Review will be scheduled during the 2021-2022 school year to examine the progress made by the district.”

In the first area, the review team said there were issues in two areas. One involved uncertainly of when some district policies were last reviewed and updated and the other dealt with how well the superintendent performed the job of a parliamentarian. The complaints were sent to Cognia and site visit was conducted while J. Alvin Wilbanks was still serving as the district’s superintendent.

“In interviews, the team learned that the superintendent was serving as the board’s parliamentarian,” the report states. “Observations of board meetings confirmed that the Board did not always adhere to Robert’s Rules of Order when conducting board meetings.

“Also, during board meetings, the chair frequently consults the superintendent about board meeting processes and next steps. Professional development and training on Robert’s Rules of Order would provide the Board with the proper guidance and support to conduct board meetings in a more effective manner.”

As far as the issues concerning the review and updating policies, the review team said the policies list a date for when policies became effective, but does not list dates for when those policies were reviewed and updated. Some policies are listed as being effective 20 or more years ago — 45 years ago in one policy’s case — raising questions about whether some GCPS policies have been updated in decades.

“The Board tabled eight policies currently undergoing a review to allow the new superintendent to provide direction and feedback and the public to provide input.”

Concerns raised about board members behaviors

As for the standard concerning the code of ethics and functioning within defined roles and responsibilities, the team said district staff raised concerns during the site visit that some board members asked for information without going through the proper chain of command earlier this year.

On Jan. 13, an unidentified board member asked for human resources data by the end of the day but did not explain why they were requesting it, according to the report. The report also lists an incident on Jan. 8, in which an unidentified board member asked for 10 years of data pertaining to Equal Employment Opportunity Commission complaints and charges, including grievances that were filed, information on part-time employees and their salaries, and raw staffing data, such as certification status, student-teacher ratios and the number of substitutes by school, grade level and class. The board member wanted to receive the information within two days.

“Staff interviews validated that these types of requests occurred frequently, and staff members viewed such requests as directives from board members,” the team wrote in its report.

Other issues included a member of the board calling for a meeting on Jan. 3, to discuss the district’s COVID-19 response, and a board member sending an email on Jan. 5, asking for additional meetings about COVID response, a pandemic task force, former Superintendent J. Alvin Wilbanks’ contract, board policy review and a vote on board leadership.

The team also said in its report that some board members had not completed their required annual training by the time the site visit was conducted in June.

A Local School Board Governance Annual Training Report for fiscal year 2020 was signed on Aug. 12, 2020, before two members of the current school board — Tarece Johnson and board vice-chairwoman Karen Watkins — were in office. The training report included individual board members annual hours of training and included places for board members to sign affirming they did not have conflicts if interest.

Those documents are to be signed by the superintendent and sent to the Georgia Department of Education.

“From the review of documents, the team discovered that not all board members had completed the FY21 required annual training by the time of the Special Review,” the accreditation wrote in its report on GCPS.

Another area highlighted by the team pertained to stakeholders complaints about Facebook, YouTube and TikTok posts created by or shared by a member of the school board. Several parents have raised issues with items posted on social media by Johnson in particular — although the review team did not identify the board member in question.

“In an interview, the board member shared that the postings express artistic talent and are replications of others’ work,” the review team said. “Nevertheless, one of the videos contained unprofessional language and another had racially offensive statements and connotations.

“Additionally, stakeholders expressed concern about the content of a board member’s Facebook post. Stakeholders reported that the posts were inappropriate and promoted the board member’s self-interest. The team reviewed recorded board meetings ... and Facebook postings dated December 29, 2020, which were submitted to the team as evidence. The team discovered supportive evidence of the board member marketing personal business and soliciting funds from stakeholders.”

Where the board goes from here

The board has until May 2022, when a monitoring visit is expected to take place, to show it is in compliance with those two areas. The review team did acknowledge the board has already been doing some work, starting as early as February, to go through training on areas where the team felt improvements are needed.

Recommendations for improvement from the review team include: finishing work on and approving board meeting norms which are already in development concerning conflicts of interest, board roles and responsibilities, ethics and parliamentary procedures; develop and implement an assessment tool to self-evaluate how well the board is meetings its role and responsibilities; review current policies for ethics and conflicts of interest while requiring board members acknowledge they understand and will abide by those policies; seek training to build collegiality; set up a way to collect, review and use stakeholder perception data; conduct a thorough review of all board policies and procedures to make sure they comply with current state laws; bring in a trainer to go over Roberts Rules of Order with the board; and develop and communicate a formal process for approving board policies and procedures.

“We are excited to see that the recommendations Cognia suggested are initiatives our Board is already working on,” school board chairman Everton Blair Jr. said in a statement. “We look forward to growing and learning together as a Board governance team with our new superintendent.”

IN CASE YOU MISSED IT: Top Gwinnett County stories from Sept. 13-19

Is there a stronger word than embarassment? Chairman Blair should be embarrassed for recruiting the new board members. He certainly did not vet them properly. I would find it comical but they oversee a 2.5 billion dollar budget, the education of 180,000 students and the future of Gwinnett County. No businesses will want to move here once their damage is done. Buckle your seatbelts.

I attended a BOE meeting earlier this year and was surprised by unprofessional this new school board is. I don't disagree that some change was needed on the Board, but I would take the old Board over this one any day.

The new school board is an embarrassment.

Georgia football is 3-0 as of Saturday. Who do you think will give the Bulldogs the hardest competition in the coming weeks?

This poll is not scientific - results reflect opinions of respondents.

Check your email for details.

Your purchase was successful, and you are now logged in.

This offer is currently unavailable.