Gwinnett County Public Schools is planning to stagger the start of its 2021-2022 school year, similar to what it did this fall, as a precaution against the possibility of a prolonged fight with COVID-19.

The big news about the schedule, however, is the staggered return to classrooms for students.

“Overwhelmingly, when we talked to staff in schools and principals, they enjoyed that (staggered return for students) and the thought it was very helpful,” Gwinnett County Public Schools Associate Superintendent for School improvement and Operations Steve Flynt said. “We do have a time where we will be able to prepare those students to have digital learning days on the first few days of school, depending on what grade level they are in.

“But, it will be staggered over (three days), similar to how we did it at the beginning of this year.”

When each grade will be brought back will be similar to what happened this fall. Kindergartners, first-, sixth- and ninth-graders will return on Aug. 4, followed by second-, third-, seventh- and 10th-graders on Aug. 5.

The plan is to have students participating in 180 days of instruction during the 2021-22 school year.

The calendar will include a fall break in October 2021, as well as a two-week winter break, a break in February 2022 and one week for spring break. The school year is slated to end on May 25, 2022. 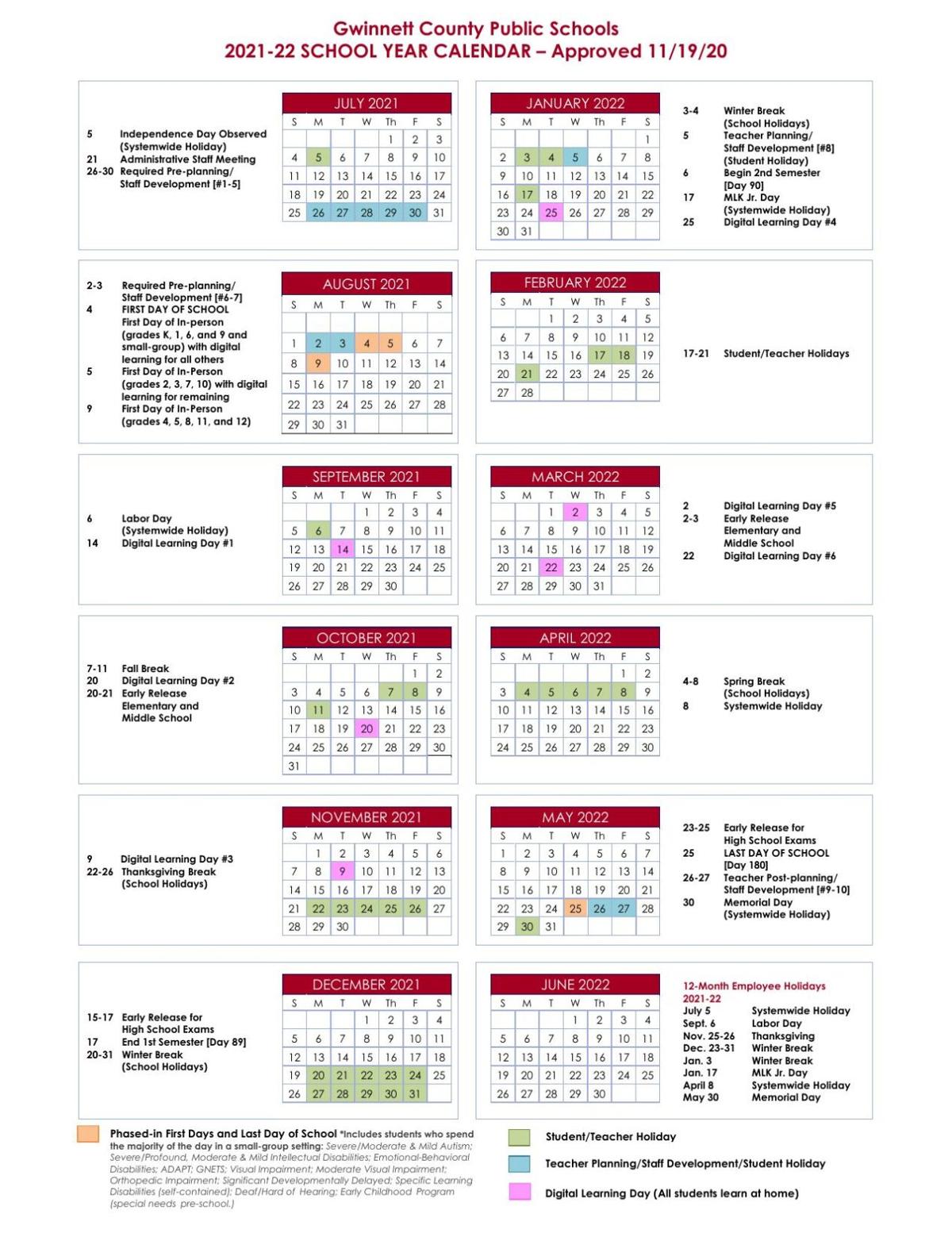 It’s not clear yet if families will be given an option on whether their kids will attend classes virtually or in person during the next school year. Flynt was asked about that by school board member Mary Kay Murphy, but he said that decision has not been made yet.

“We haven’t gotten to that yet,” Flynt said. “We’re hopefully going to see some great improvement over next semester.

“Now, next semester we are providing that and you’ll recall we extended the deadline because we got a lot of feedback from parents that they didn’t have enough time, so we extended that time until after the Thanksgiving break.”

The associate superintendent explained to board members that the option involving a staggered return to school was popular with officials at the county’s schools. The schools were given multiple calendar options to review and offer a preference on.

All but about “two or three” chose the one with the staggered start to the school year, according to Flynt.

“This is probably one of the (few) years where we’ve seen everyone really gravitate toward to one of our options,” he said.

In the more immediate future, the district is also planning to make some changes to the current school year calendar. These changes will pertain to the spring semester calendar.

These changes include starting the semester one day later, on Thursday, Jan. 7, to give teachers one additional day for pre-planning that week.

There will also be four asynchronous digital learning days added into the schedule on Jan. 26, March 2, March 16 and April 20.

“These would be asynchronous days which would mean less interaction with teachers,” Flynt said. “The teachers would plan the lessons, provide them for the students and the students would have that asynchronous self-learning during the day because that would allow the teachers four full days to do the planning that they need to do.”

Stacker put together a list of the 50 best pop songs of the last 30 years based on the Billboard Pop Songs chart from its inception all the way up to Sept. 30, 2017. Click for more.

IN CASE YOU MISSED IT: Top Gwinnett County stories from Nov. 16-22

Bryson DeChambeau has adventure after thinking he missed cut

Traveling to Canada during Covid-19: What you need to know before you go