At 5 p.m. on Thursday, select Gwinnett County Public Schools teachers were notified they would receive a bonus next week as part of the district’s newly launched Performance-Based Teacher Compensation system.

There are 3,144 teachers representing 138 schools selected to receive awards. The awards are based on exceptional student achievements in the 2018-19 school year and will be distributed in a one-time payment on Dec. 18.

The cumulative value of the district’s 3,144 awards is $12,377,863.68. Allocations for Performance-Based Awards have been made on previous GCPS budgets. District officials said there is nothing lost from teachers’ regular salaries and raises with the addition of performance based awards.

The day teachers receive their awards will be the culmination of a years-long process. In 2015, the school district began implementing a fair and flexible compensation system that rewards teachers for exceptional performance rather than years of service. GCPS CEO and Superintendent J. Alvin Wilbanks and his staff began observing performance-based award systems of other school districts as early as the mid-2000s. 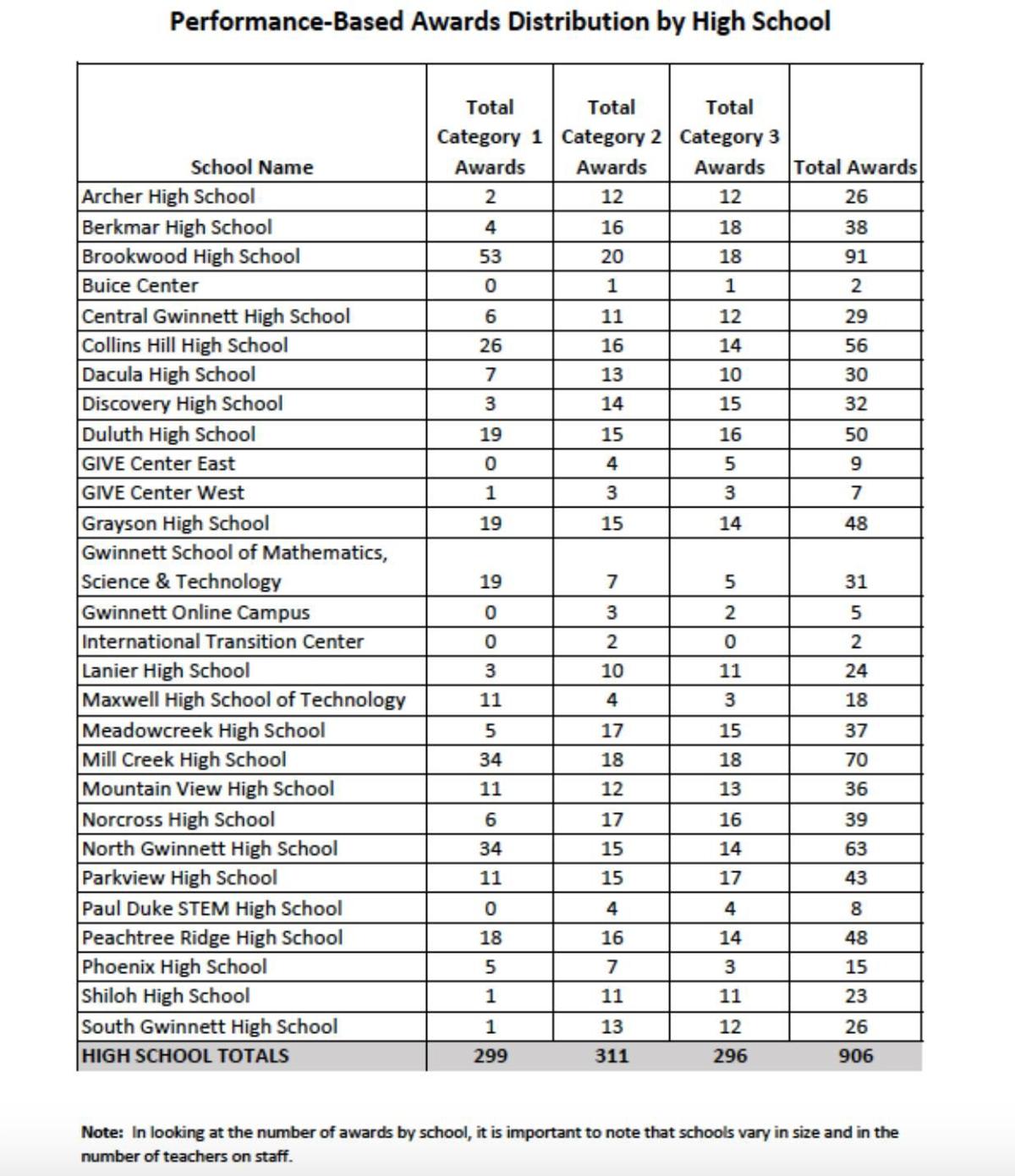 Wilbanks said the reason for implementing the award system is that teachers simply deserve it.

“We employ some of the best teachers in the profession, but historically the highest-performing teachers have not been recognized and rewarded financially for the truly outstanding work they do,” Wilbanks said.

Award amounts are distributed in three tiers based on four- and three-category metric systems, which use objective data to produce a score for teacher performance. The majority of teachers were evaluated on the four-metric path, but not all teachers — some special education or elective teachers, for example — have enough test-taking students or equivalent assessments to compare across the school or district to accurately measure student growth. Those teachers were evaluated on the the other three metrics alone.

Assistant Superintendent of Leadership Development Jeff Mathews said the district settled on the two-plan system of distribution in an effort to try to reward as many teachers as possible.

The first metric, professional growth, indicates whether teachers met the district’s requirement of 20 hours of professional development. Teacher Assessment on Performance Standards is the state teacher evaluation system and is used to produce a summative performance score, the second metric. The third metric is a weighted school assessment, which provides a snapshot of how well a school is performing. The fourth metric, student growth, is based on local assessments to compare one teacher’s students’ growth to that of similar students in the same course on the same assessment.

Individual teacher statements were issued through the district’s employee portal Thursday. Teachers from the 2018-19 school year who are no longer in the district were also eligible for awards. They will receive a letter and a a check, both of which will be mailed on Dec. 17.

The district has spent two years developing its methodology, which it says has been validated by internal and external parties to ensure its integrity and accuracy.

The district has aspirations to expand the teacher compensation program, both with regards to the percentages of teachers awarded and with the amount of money, as the budget allows. The hope within GCPS is that the performance-based compensation system will help the district higher and retain more talented teachers in the future.

“We feel we have made an excellent start on a teacher-reward system that states loudly and clearly that we appreciate our teachers and their work,” Wilbanks said in a statement. “That said, we know that in this first administration of the awards, we may identify ways to further improve the system.”

Some Collins Hill teachers received a letter from an anonymous teacher, who received a raise of approximately $3,172.15. Included with the letter was $20 for each teacher.