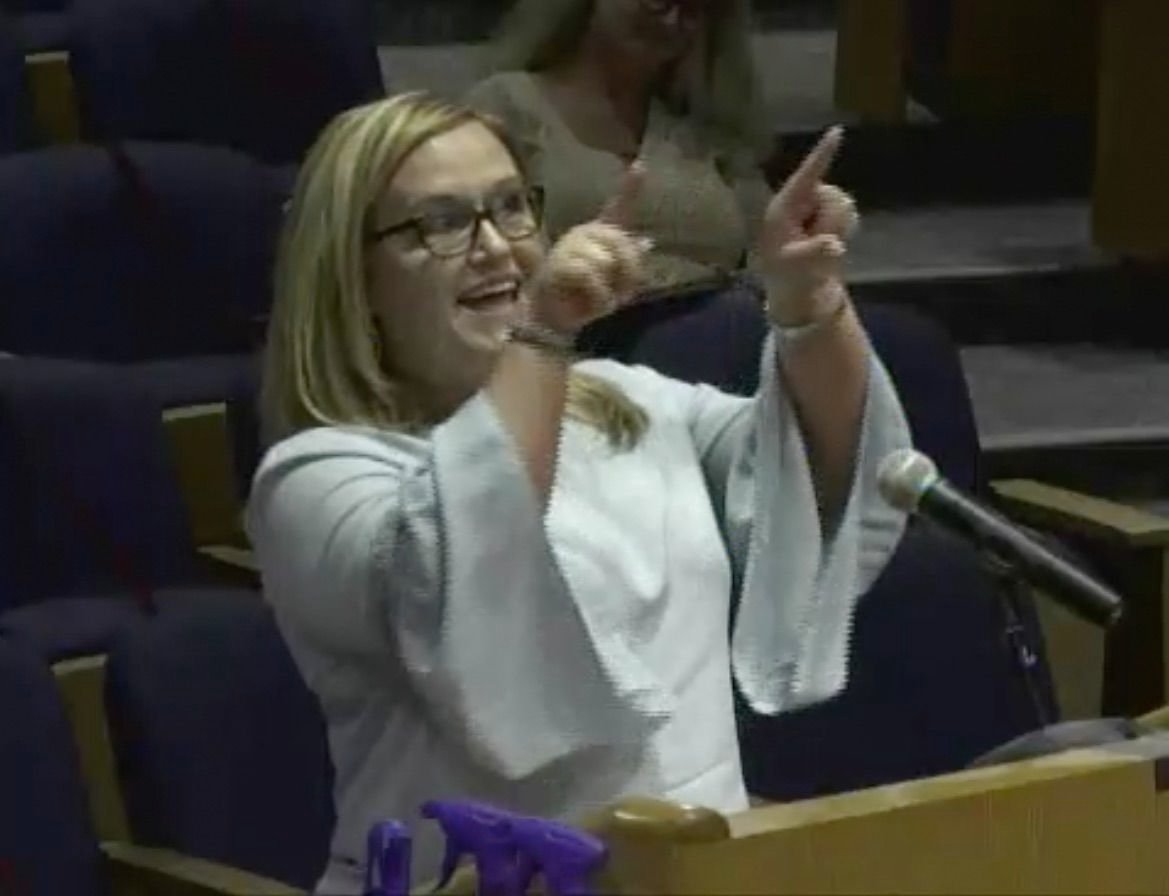 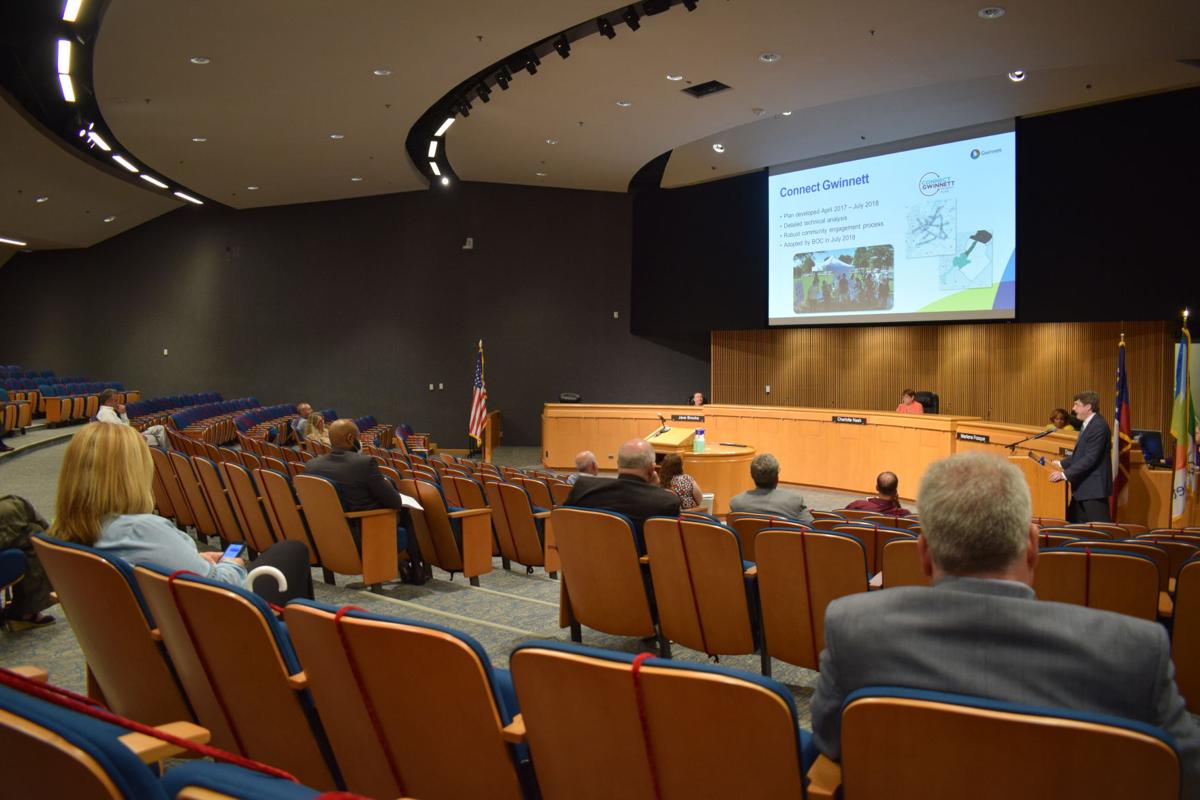 Gwinnett County commissioners meet with officials from the county’s cities at the Gwinnett Justice and Administration Center to discuss transit expansion on Thursday. 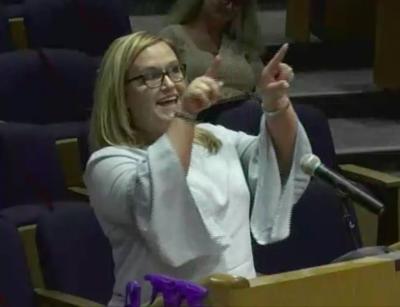 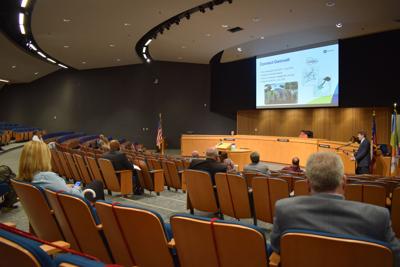 Gwinnett County commissioners meet with officials from the county’s cities at the Gwinnett Justice and Administration Center to discuss transit expansion on Thursday.

Grayson Mayor Allison Wilkerson may have sparked a bidding war between other Gwinnett cities for transit funding Thursday afternoon.

As leaders of each of Gwinnett’s cities met with county commissioners, Wilkerson told county officials that her city was not interested in getting transit projects for the Grayson area that Gwinnett leaders were looking at putting on a transit referendum list. It was a head turning moment as representatives the cities weighed in on the possible projects that could be funded by a transit tax.

Wilkerson said Grayson was close enough to Snellville to use transit projects that are included for that city.

“Grayson is a different animal,” Wilkerson said. “No one moved to Grayson for easy access to (Interstate) 85 and I don’t believe anyone moved to Grayson with the thought that transit was going to come our direction. So the people I speak to in Grayson are perfectly happy if you (took away) all of the Grayson (projects).

“We’re close enough to Snellville. We don’t really have the area. We don’t have the need. No one shows up at City Hall every day wanting transit. If anything, we hear that they don’t want it. We’re appreciative for the rest of the county that has a desire, but we’re that animal that’s perfectly fine without it.”

Gwinnett is still in the process of determining what projects would go on a ballot question for a transit referendum that voters would have to approve, and Thursday’s meeting was a chance for city leaders to highlight any projects they especially wanted to see included in a transit vote.

“It will probably be the third week in June before we officially act on it, but we’ve got to get the decision wrestled down in the first half, either the first week or the second week of June,” Nash said.

The chairwoman did not rule out the possibility that commissioners will hold a called meeting in early June to discuss a constrained list before a vote happens.

The constrained list would have to be submitted to the Atlanta Transit Link Authority board for approval before the county can schedule a Gwinnett transit referendum. Nash said a decision has not yet been made on when to schedule a referendum.

As a precaution, however, county leaders are following a timeline to ensure the November ballot remains an option. Commissioners have until sometime in late July to call for a referendum if they want it on the November ballot, but they would need the ATL board’s approval of the constrained list by then.

They would also have to decide whether voters would be deciding whether to simply expand Gwinnett County Transit, or fold Gwinnett into MARTA before deciding when to hold a referendum.

“We’re trying to keep all of our options open so we’re meeting deadlines for both the MARTA penny and the transit tax penny so the board’s got as many options from which to choose as possible,” Nash said.

That just leaves the question of deciding what to include on the constrained project list. County leaders have to figure out how to spread projects out around the county.

While Grayson is not jumping at the chance to get more transit, Gwinnett’s other cities are eager to see projects included for their areas.

In fact, Sugar Hill Mayor Steve Edwards and Suwanee City Councilwoman Linnea Miller jokingly offered to take some of the funding that would have gone Grayson’s way so their cities could get additional projects.

“He can have it,” Wilkerson shouted from the audience.

Meanwhile, Miller said Suwanee has a lot of congestion on McGinnis Ferry Road that needs to be addressed. A bus route along that road would help, she added.

“We could always take one of those routes from Allison,” Miller said.

Other cities had their own thoughts.

“We are the other animal and we’re comfortable with the (unconstrained) list and we’re sure you’re going to get everything that’s listed on there,” Lawrenceville Mayor David Still said.

There’s also the question of whether to include a heavy rail line that would go to at least Jimmy Carter Boulevard, if not further north to Gwinnett Place Mall.

Snellville officials are not keen on seeing heavy rail included. That may not be too surprising since the proposed rail line was not set to go near the south Gwinnett city, meaning its residents likely would not see a benefit from it.

“The city of Snellville supports the ‘No Rail’ option, which we believe would allow for greater flexibility for future changes in population growth and ridership through changes in bus routes rather than an inflexible heavy rail investment,” Snellville Mayor Barbara Bender said.

“Gwinnett’s cities are all developing their own town centers that are creating density in smaller geographic areas which naturally provide better hubs for people to access transit in the future. We believe that investments that can be made across the county versus the concentration of so much investment with heavy rail in one area would provide more transit opportunities for people throughout the county.”

It is mind boggling to me that the Board of Commissioners are pushing MARTA once again when the citizens have made it clear that MARTA is not wanted in Gwinnett. MARTA is a magnet for crime. Property values will decrease, and the taxpayers will have to endure yet another tax burden. But, what I find most ridiculous is the BOC wants the taxpayers to pay even more taxes at a time like this. COVID19 has destroyed the economy and there is no clear picture if it will recover. Tousands of Georgians are jobless. Businesses have been driven to close their doors never to reopen. Tell me commissioners, where are people going to go if they have no jobs and there are no businesses to patronize? Why does one need MARTA to go nowhere? The citizens of Gwinnett County can't afford to feed their families let alone bank roll MARTA. I will just come out and say it - how much money will line the pockets of the BOC and other politicians if MARTA is brought here? Use your common sense for once and put your greed aside. For once think about the taxpayers of this county.

The citizens have hardly made it clear they don't want MARTA. A nandful of narrow minded citizens voted against a MARTA referendum last year in a low turnout off time vote that was hardly reflective of most Gwinnettians. It will cost enxt to ntohignt o put ti back on th e ballot in Novemebr where a large numebr of citizens will turen out to vote in the election and would give a more accurate view of where Gwinnettians stand on the issue of joining MARTA and getting the connectivity to the region we need.. There is no proof that property value decrease with more transit in fact property values near transit stations go up in value. There may never goe a 'good' tiem to raise taxes but to get the government services we need it requires funding and we have put this transit expansion off for way too long as it is and we have a lot of catching up to do. Masny fo these job losses are temporary and we will ahev recovered from thsi by the time the main systems are completed and the demand will be there. We needed to start years ago. I would propose the 'Magic7' and thsoe who think like this commenter uses their common sense and looks at the big picture. We should be thanking the commissioners for looking out for the good of the county by moving forward on transit and now housing.

It's unfortunate that Snellville has a long history of being narrow minded. It will eventually have an opportunity to have rail come near the city when the MARTA east line is extended. For them to oppsoe the beginnigns of a raile xtension in another part of the county is ludicrous. They will be getting additional service there via Bus Rapid Transit initially. There is greater demand for rail transit to relieve I-85 congestion than there is to relieve SR78 congestion. I can understand Graysons point and bus service there can be minmized until they need it. However service can be expected to pass through the area on state highways but stops can be limited within Grayson as they requested. We need to move forward with a transit system giving Gwinnettians better access to the region. We cannot do that by just expanding our systems as we are limited as to what services we can offer in connectivity outside Gwinnett.