Gwinnett County Public Schools administrators are asking the county’s school board to make a change to its public comment policy that will limit the number of people who can speak at board meetings.

The proposed change to the public participation in board meetings policy, known as policy BCBI, was introduced to the board members by staff at a work session on Thursday afternoon. Under the proposal, only 15 people would be able to speak during monthly business meetings of the school board, with the public comment period limited to 30 minutes.

Anyone who speaks to the board during public comment periods at two consecutive meetings would then be prohibited from addressing the school board for two months.

“I am asking that you vote to put these recommendations on the table,” said Jorge Gomez, Gwinnett County Public Schools’ executive director of administration and policy, during his presentation to the board. “Remember that gives you as a board and it gives our constituency base 30 days to provide input back to us. We’ll bring input back to you and we can adjust that if so needed.”

The school board voted Thursday to put the proposed policy change, along with two other changes to the district’s sexual harassment and student complaints and grievances policies on the table for one month. Residents have until the March board meeting to weigh in on the proposal and offer feedback to district officials and board members.

The district’s current policy allows for two opportunities for public comment on the evening of school board meetings. One is during a 30-minute period from 6:15 until 6:45 p.m., before the meeting. The second is during the meeting, when an unlimited number of people can address the board for three to five minutes.

In recent months, that has resulted in public comment periods that have lasted for multiple hours. In January, for example, it lasted for about two and a half hours. On Thursday night, 60 people were signed up to address the school board.

“It’s no doubt that public input is important,” said Gomez, who held up the fact that GCPS has allowed public comment at board meetings since the 1980s as part of his argument that the district does value public input.

“As important as public input is, it is also important that you run an effective and orderly meeting,” he said.

“That would allow a total of one hour of public comment” between the two time periods, Gomez said.

By state law, only the school board can change policies for the district. So while district officials can ask for the change, it is ultimately up to the board members to decide whether to do it.

Among the changes being proposed, Gomez told the board it can pair down comments to weed out repetitive statements.

“The board has the right to do three things,” Gomez said. “No. 1 is limit number of speakers, you have the right to limit those that use repetitive comments and if there are groups for and against — there’s 50 people to paint the buildings pink and there’s 50 people to paint the building blue — you do have the authority to ask those groups to coalesce to one voice so you can run that effective, orderly meeting that we are talking about.”

If the proposed policy change on public comment is approved, there may be a situation where each side of the debate is asked to pick just one person to address the board during the 7 p.m. meeting.

Craig Lownes, whose kids graduated from GCPS, said he disagreed with the proposed change and while he said he was uncertain whether it was coming from the district or the board, he said he felt it was a knee jerk reaction to the large numbers of people speaking at board meetings in recent months.

Lownes estimated he has addressed the school board about 50 times during public comment periods at meetings over the last 18 years.

“It is good that so many people are impassioned about the importance of the school system and I believe that the changes outlined this afternoon will stifle the discussion and debate around the operations and improvement of the Gwinnett County school system,” Lownes said. “Limiting how often and the number of presenters is not an effective method to take the pulse of your constituents.”

But, while board members did not publicly protest the proposal during the presentation, some of them did have questions about how they would receive feedback from the community.

Board Vice-Chairwoman Karen Watkins inquired how the district would ensure parents and other community stakeholders could provide input to the board if public comment is limited.

“Is there opportunities where you all could look at so maybe it could stream through the school or something where we could help ensure that these parents who may not be able to get to board meetings, or may not have the electronic access to see things virtually, do have other opportunities?” Watkins asked. “Maybe it’s not email, but maybe they could leverage the school. I don’t know. I don’t know what it would be, but something where we have an opportunity so that they can get things back to the board so that we can hear what is going on in our community.”

Board member Tarece Johnson asked how non-English speaking residents would be engaged since the public comment sign up process is currently done in English. Gomez said residents can sign up for interpretive services to help those people during board meetings.

Johnson also asked how the district would ensure equity to make sure people who can’t make it to board meetings would be able to provide public input.

“Is it a remote option?” she asked. “What can we do to make sure that all of these voices are heard in a way that really just represents the community.”

In response, Gomez said, “Can we do remote? Can we do all of those things? And I get concerned when we use the word ‘all.’ I know what you mean by that. I know ‘all’ means we want to hear from a plethora of (the) community, but if we really listen to all members, we’ll be here two weeks in a row without sleep.

“So remember the thing I started out with, we have to balance the community input, which we’ve been receiving since 1980 and we no doubt think is important, with running an effective and orderly meeting. So, when you do that and do not create a priority or a way to manage that, we will continue to be here for four, five, six, seven, eight, nine, 10 hours to listen to all.” 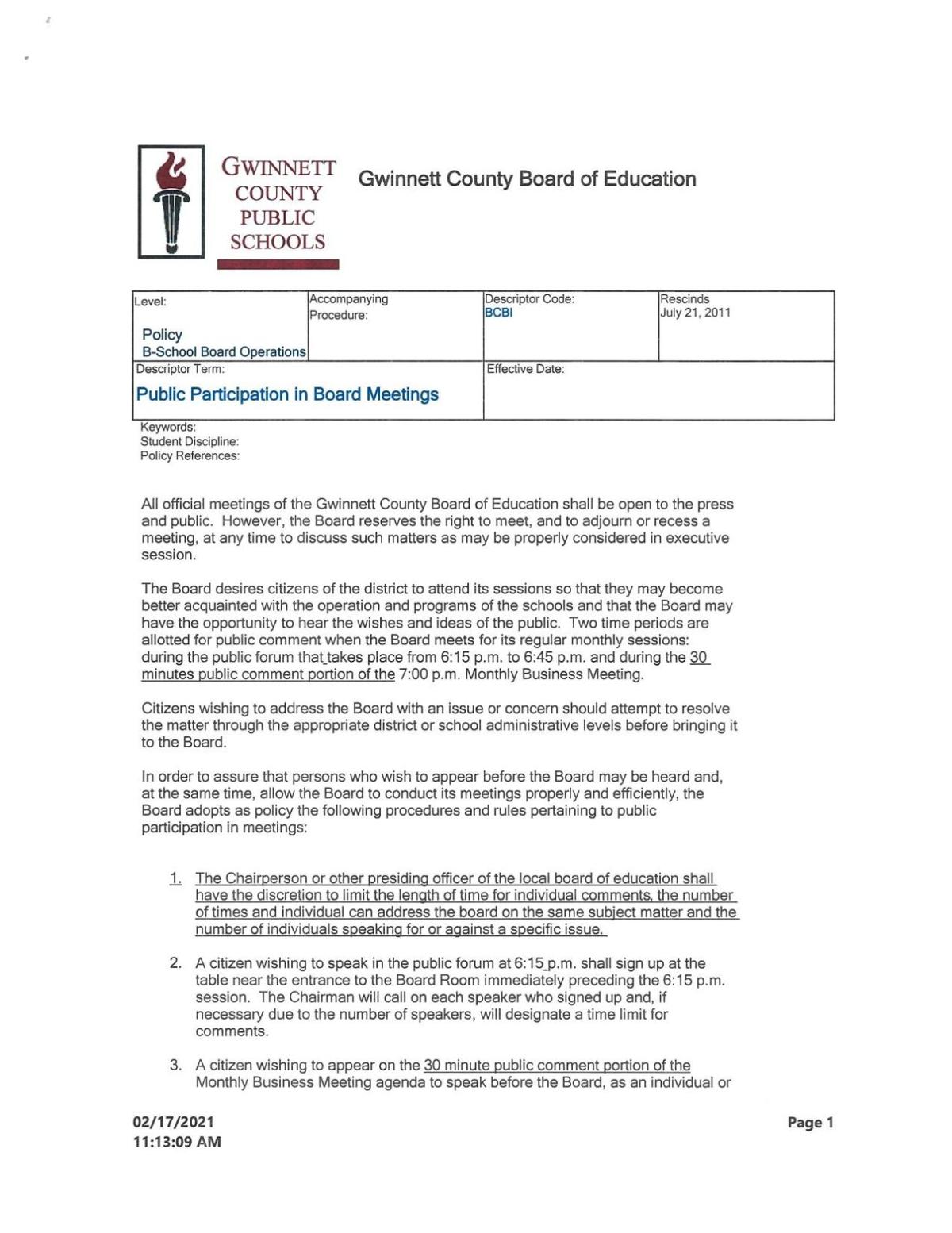 IN CASE YOU MISSED IT: Top Gwinnett County stories from Feb.15-21