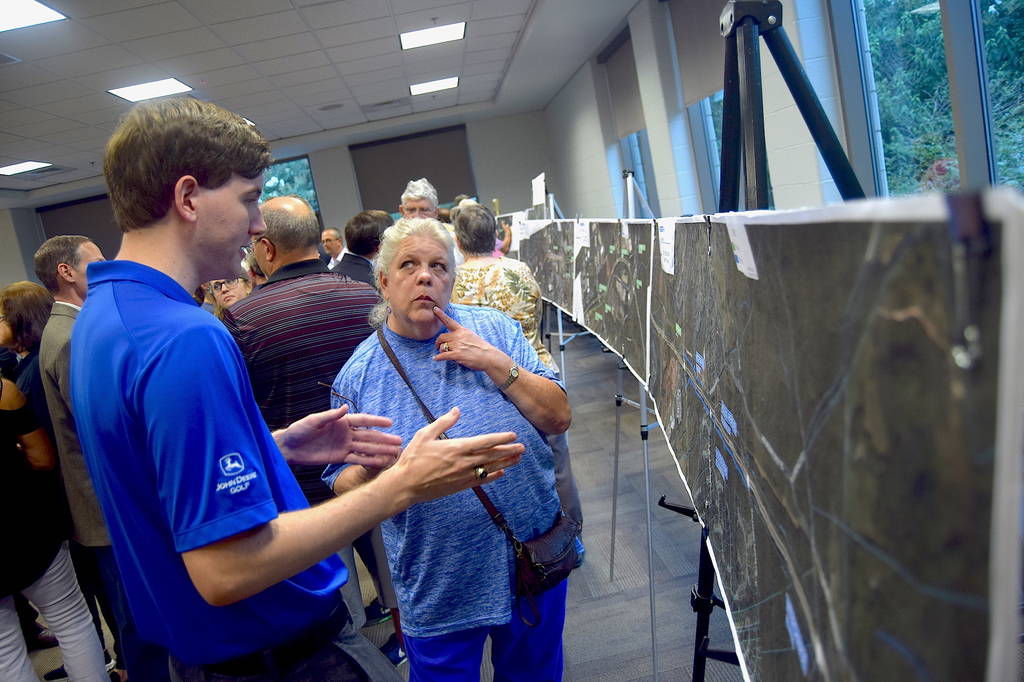 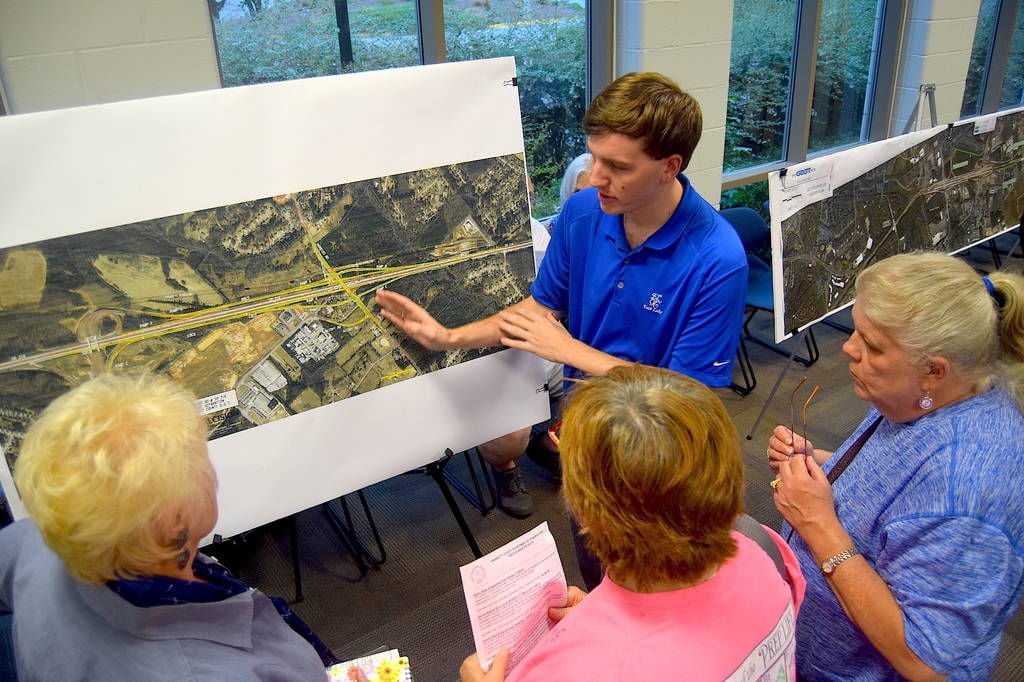 Georgia Department of Transportation Civil Engineer Tyler Whaley talks to Dacula residents about how Gwinnett County’s Harbins Road at state Highway 316 interchange conversion might affect them during an information meeting about transportation projects on the highway on Monday at the Dacula Park Activity Building. (Staff Photo: Curt Yeomans) 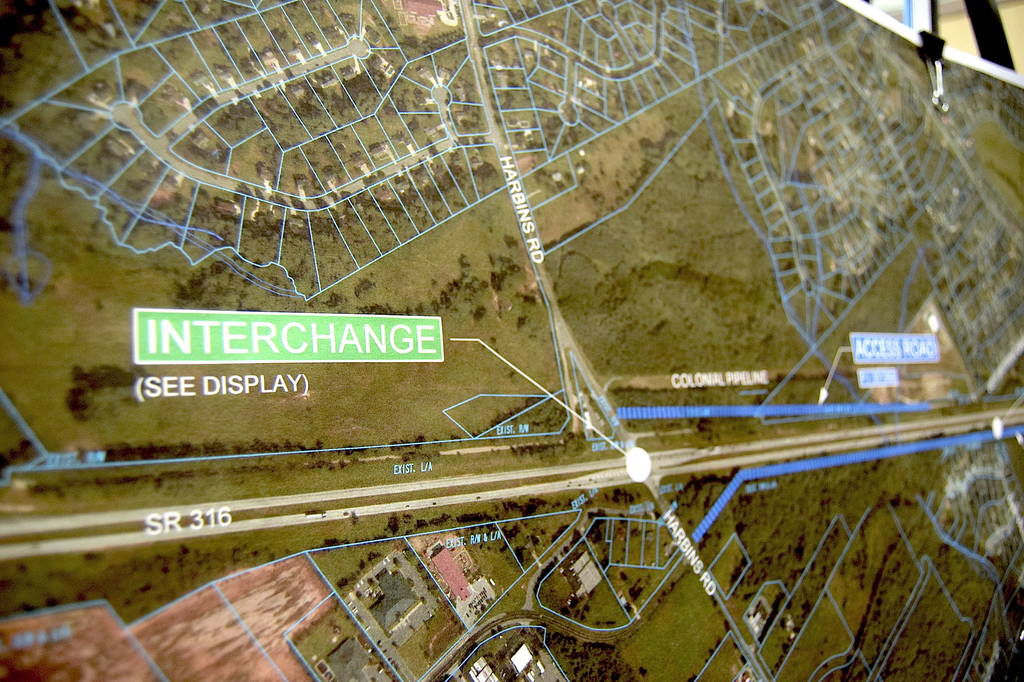 This Georgia Department of Transportation map shows where a planned interchange at the current intersection of state Highway 316 and Harbins Road will be built. Several projects are planned to be built over the next decade to transform Highway 316 into a limited access road in eastern Gwinnett County. (Staff Photo: Curt Yeomans) 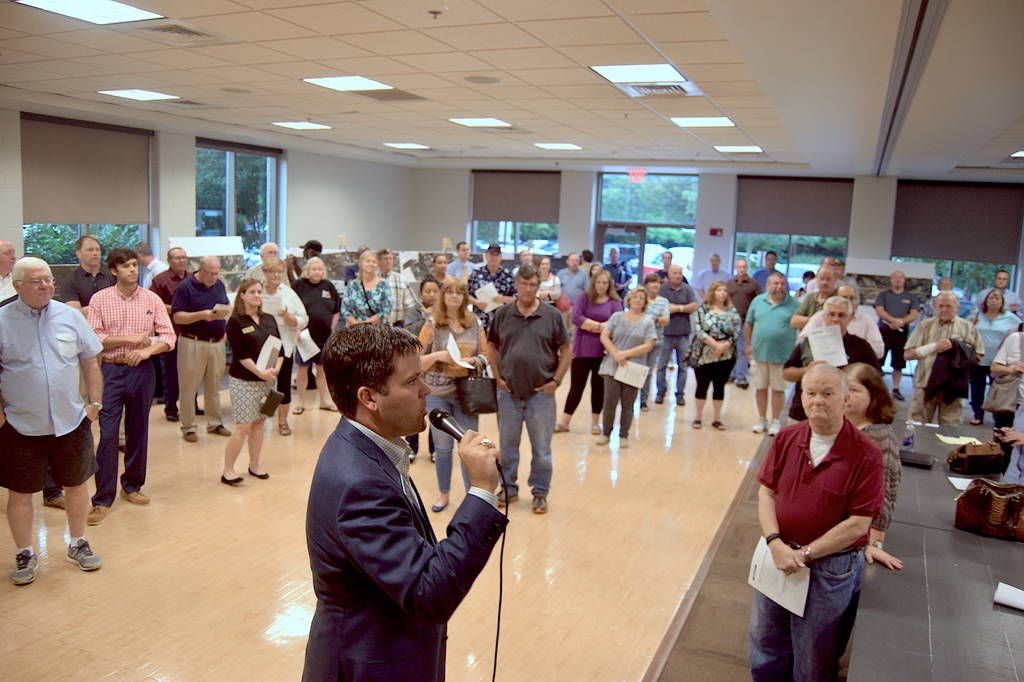 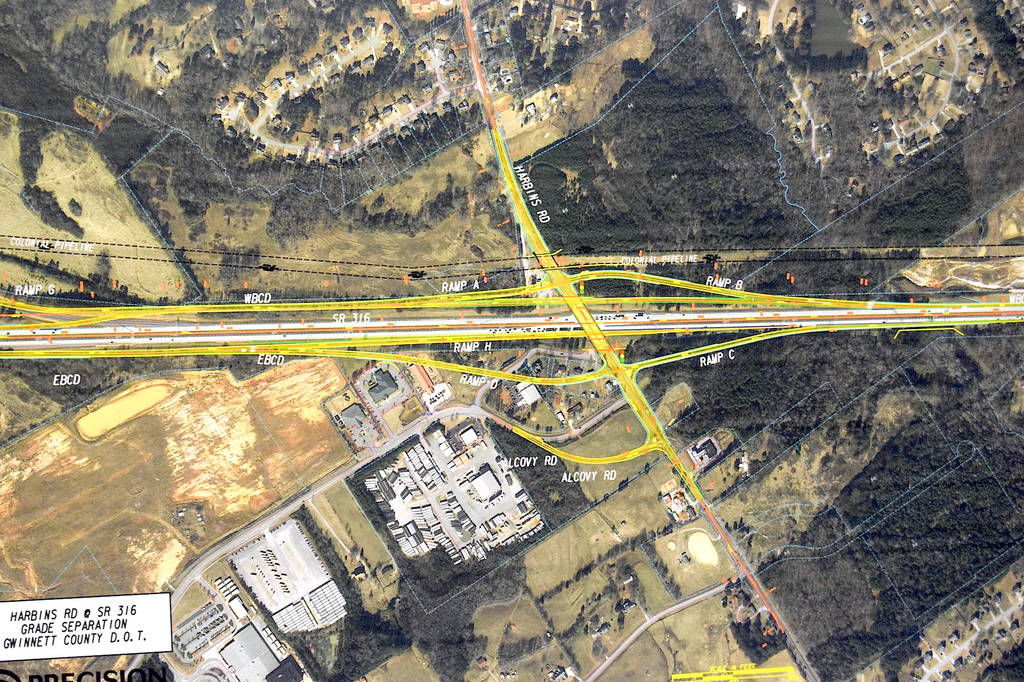 This illustration shows the planned layout of a planned interchange at the current intersection of Harbins Road and state Highway 316. The intersection to interchange conversion is expected to begin in 2019 and county officials hope to have it finished in 2021. (Staff Photo: Curt Yeomans) 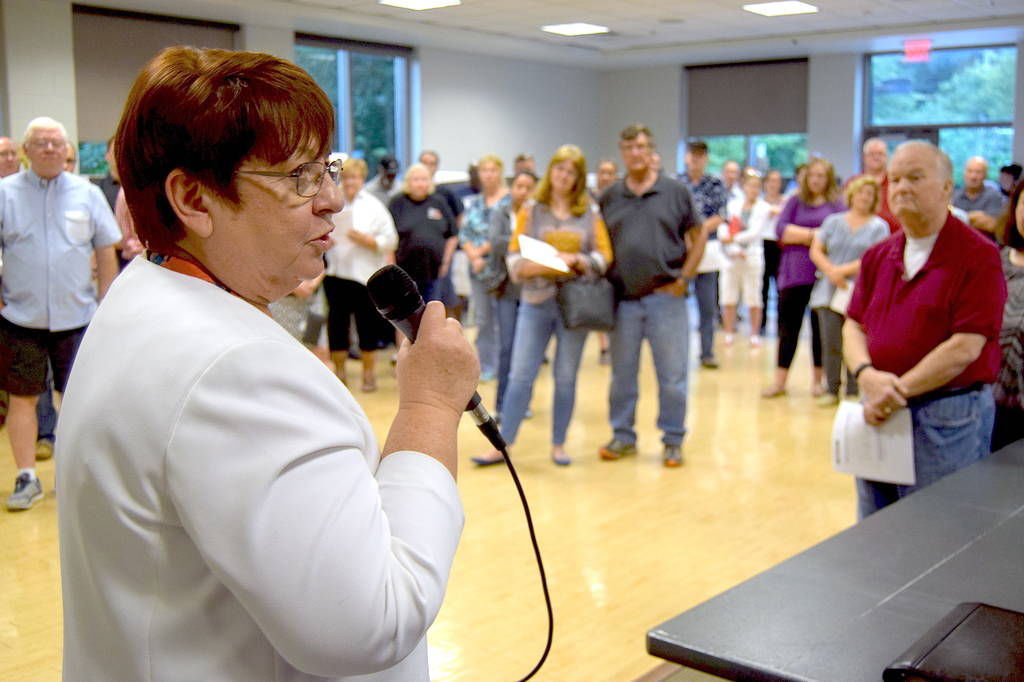 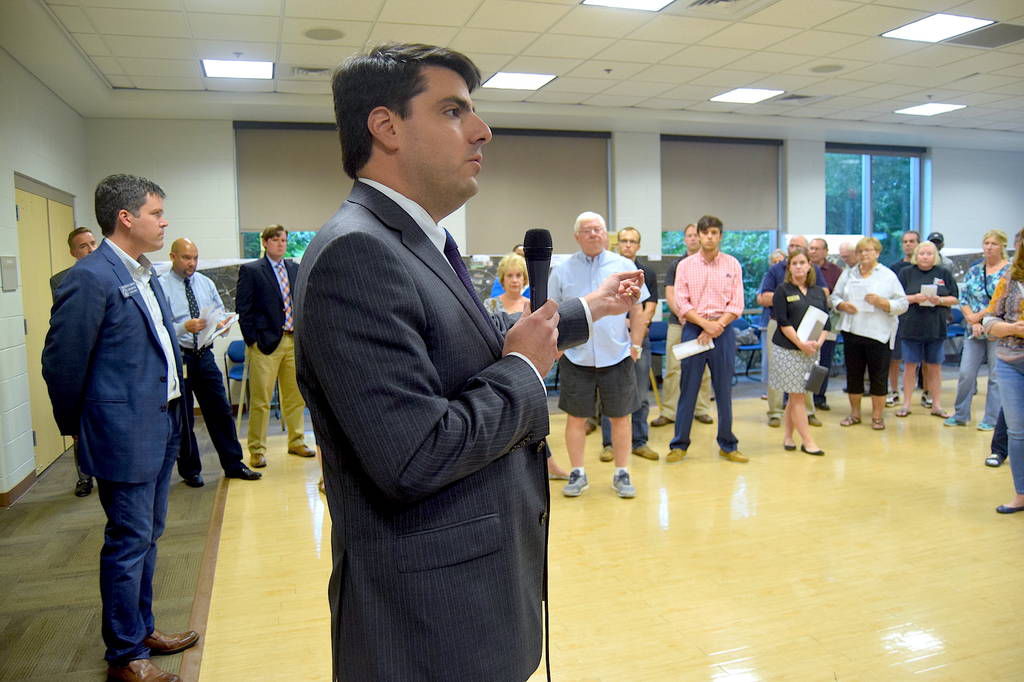 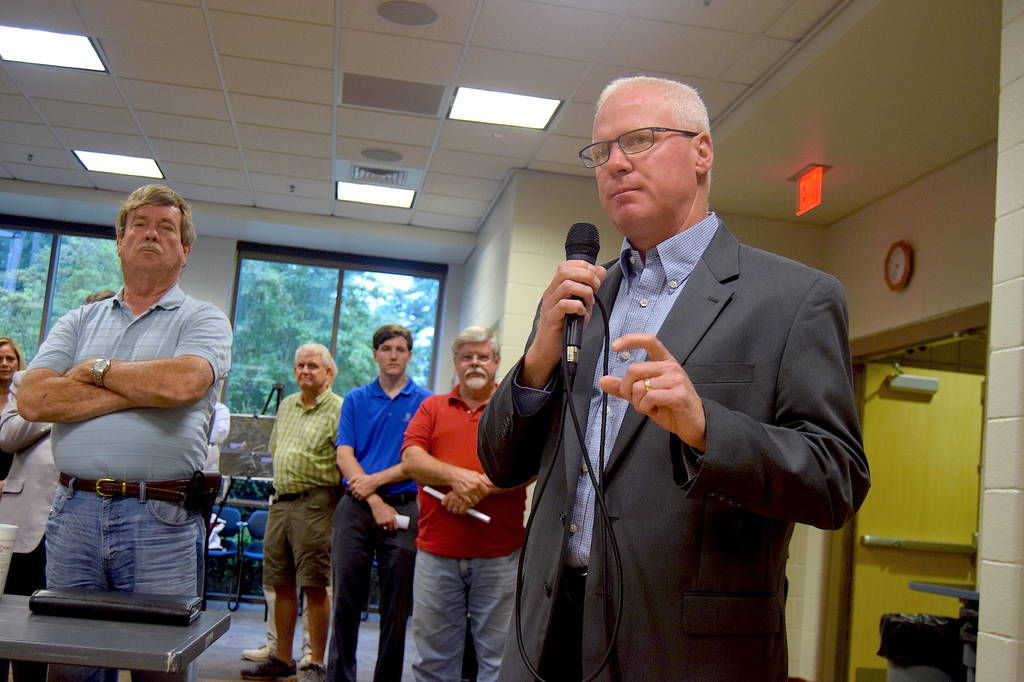 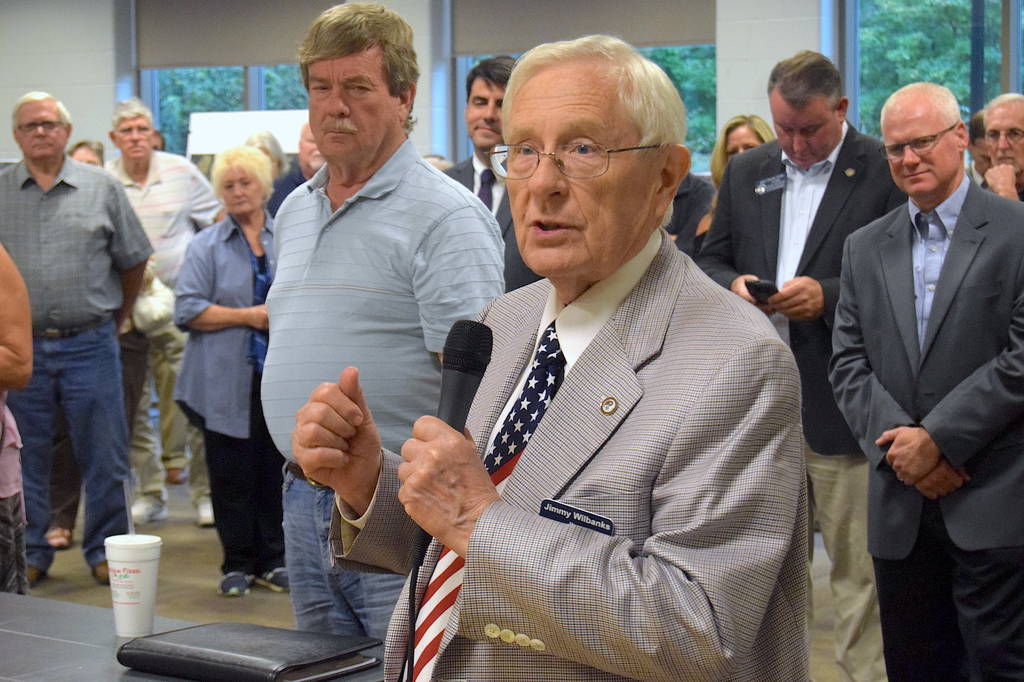 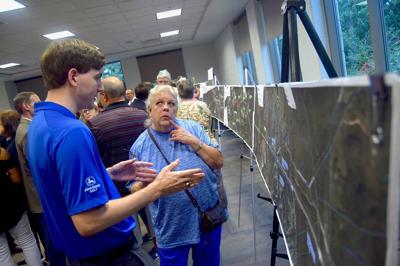 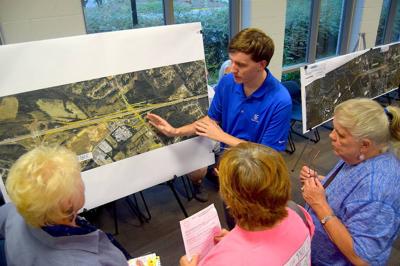 Georgia Department of Transportation Civil Engineer Tyler Whaley talks to Dacula residents about how Gwinnett County’s Harbins Road at state Highway 316 interchange conversion might affect them during an information meeting about transportation projects on the highway on Monday at the Dacula Park Activity Building. (Staff Photo: Curt Yeomans)

This Georgia Department of Transportation map shows where a planned interchange at the current intersection of state Highway 316 and Harbins Road will be built. Several projects are planned to be built over the next decade to transform Highway 316 into a limited access road in eastern Gwinnett County. (Staff Photo: Curt Yeomans)

This illustration shows the planned layout of a planned interchange at the current intersection of Harbins Road and state Highway 316. The intersection to interchange conversion is expected to begin in 2019 and county officials hope to have it finished in 2021. (Staff Photo: Curt Yeomans)

Lora Thigpen came to a meeting about state Highway 316 transportation projects in the Dacula area on Monday night to find out if she was going to lose her home.

Thigpen lives about five houses away from the highway on Harbins Road. The county plans to convert Highway 316’s intersection with Harbins Road into a limited access interchange with exit and entrance ramps. That had Thigpen worried her home might be targeted for demolition.

During the meeting at the Dacula Park Activity Building, she talked at length with a Georgia Department of Transportation engineer about the where her home was in relation to where the highway is and where the planned interchange will be.

In the end, Thigpen said she got a glimmer of hope.

“It’s going to affect people we know who live closer to 316, our neighbors … but it might just miss us,” she said.

Monday night’s meeting was hosted by state Sen. P.K. Martin and the Gwinnett County Department of Transportation to give residents an update on various transportation projects taking place along Highway 316. The highway has gradually been converted to a limited access road between Interstate 85 and state Highway 20.

Now state and county officials are looking to continue that conversion eastward, toward the Gwinnett-Barrow County line, over the next decade.

About 200 residents attended the meeting.

“I know I don’t have to convince anyone here of the importance of this project, and making sure Georgia 316 is safe, but also making sure we can travel quickly and effectively and get to work, and get to the places we have to go,” Martin told attendees.

Meanwhile, state Rep. Chuck Efstration, R-Dacula, said getting the highway’s issues addressed is his No. 1 priority.

“If you drive 316 everyday like I do, you see exactly how dangerous this highway is, and the type of congestion and problems that have now moved out to our backyard since the improvements at 20 and closer in (were finished),” Efstration said.

In addition to the interchange at Harbins Road, another change outlined on maps shown at the meeting was the completion of an access road between Highway 20 and Collins Hill Road. That will give people on Buford Drive access to Georgia Gwinnett College.

The plans also include turning the current intersection of Highway 316 and Hi Hope Road into an overpass with no direct access to the highway. The Georgia GOT is also planning limited access interchanges at 316’s current intersections with Hurricane Trail, U.S. Highway 29 and Drowning Creek Road.

“If you look at these diagrams … you’re seeing conceptual big dash lines,” McMurry told attendees. “That’s because we’re at that phase where we’re understanding what we know needs to be done and we’ll be moving forward, pretty rapidly, into what we call conceptual design which would look more like what you see on the diagram of Harbins Road, where you see ramps and lane lines.”

Gwinnett County Department of Transportation Director Alan Chapman said the Harbins Road and Highway 316 interchange is the county’s big focus. The county took the lead on the project and is paying for it with funding from the 2017 SPLOST.

Construction on the interchange is expected to begin in 2019 and Chapman said county officials hope to open it to traffic in 2021.

“(Addressing Highway 316) is a real need for the county, and for the state,” Chapman said. “316 is a very busy corridor. It’s a heavy freight corridor and these at-grade intersections are a real safety concern for us. That’s why the county prioritized the Harbins Road interchange with SPLOST dollars.”

Nash the passage of the SPLOST last year was a big step forward in making the interchange possible.

“Without the positive vote for the last SPLOST program, we would not have the dollars to be able and move ahead the grade-separated interchange at Harbins and 316,” she said. “The state DOT is going to bring some dollars to the table on some other parts of projects up and down 316, but we would like to think we’re willing to help ourselves here in Gwinnett County.”

Regardless of whether the state or county foots the bill, attendees at the meeting said improvements need to be made on Highway 316.

“(Highway) 316 is a hot mess and it is dangerous,” Thigpen said. “A lot of people (have been) killed at that intersection and at Fence Road. Fence Road and 316 is really bad so, all in all, this is a good thing.”

Thigpen said she has driven the highway countless times over the last 20 years. She recounted some of the accidents and close calls she’s seen or heard about happening in the area around Harbins Road and 316.

She said that intersection isn’t the only dangerous part of Highway 316 in the Dacula area, though.

“Trying to go from 316 onto Fence Road is (like) risking your life,” she said. “It’s frightening. I try to avoid that … There’s no light there and you just have to sort of wing it.”

Thigpen and Joe Proenza said traffic congestion on Highway 316, east of Highway 20, is another reason why they feel the conversion is needed.

Proenza, who lives in western Gwinnett, said he traveled the road twice a week when he attended the University of Georgia. He said days when UGA is hosting home football games show how bad the congestion can get on the highway.

“I don’t know anybody who likes the way 316 is currently constructed,” he said. “There are a lot of other people who want to fight for these transportation dollars but it’s a freight corridor (and) it goes to the state’s premier school … there’s a tremendous amount of traffic there on game day.

“If you want to go there on a Saturday morning for a noon game, if you don’t leave before 6 a.m., you’re in for a three hour ride that should only take 45 minutes to an hour from where 316 starts (at I-85) to the loop in Athens.”

Monday night’s meeting at the Dacula Park Activity Building was hosted by state Sen. P.K. Martin and the Gwinnett County Department of Transpo…

Wichita Police officer was wounded and a suspect killed in shooting, police say

Amazon Prime Day is actually a bummer for these sellers