A federal court has denied a Gwinnett County Public Schools motion to dismiss a 2018 Title IX lawsuit brought by a former Peachtree Ridge High School student, who was suspended after reporting an alleged sexual assault in 2015.

The suit, which was filed on Nov. 26, 2018, by the victim’s attorney, Adele Kimmel, who is from Washington-based public interest law firm Public Justice, alleges that the victim, referred to only as “Jane Doe,” was retaliated against after reporting the assault, which occurred on Feb. 4, 2015. 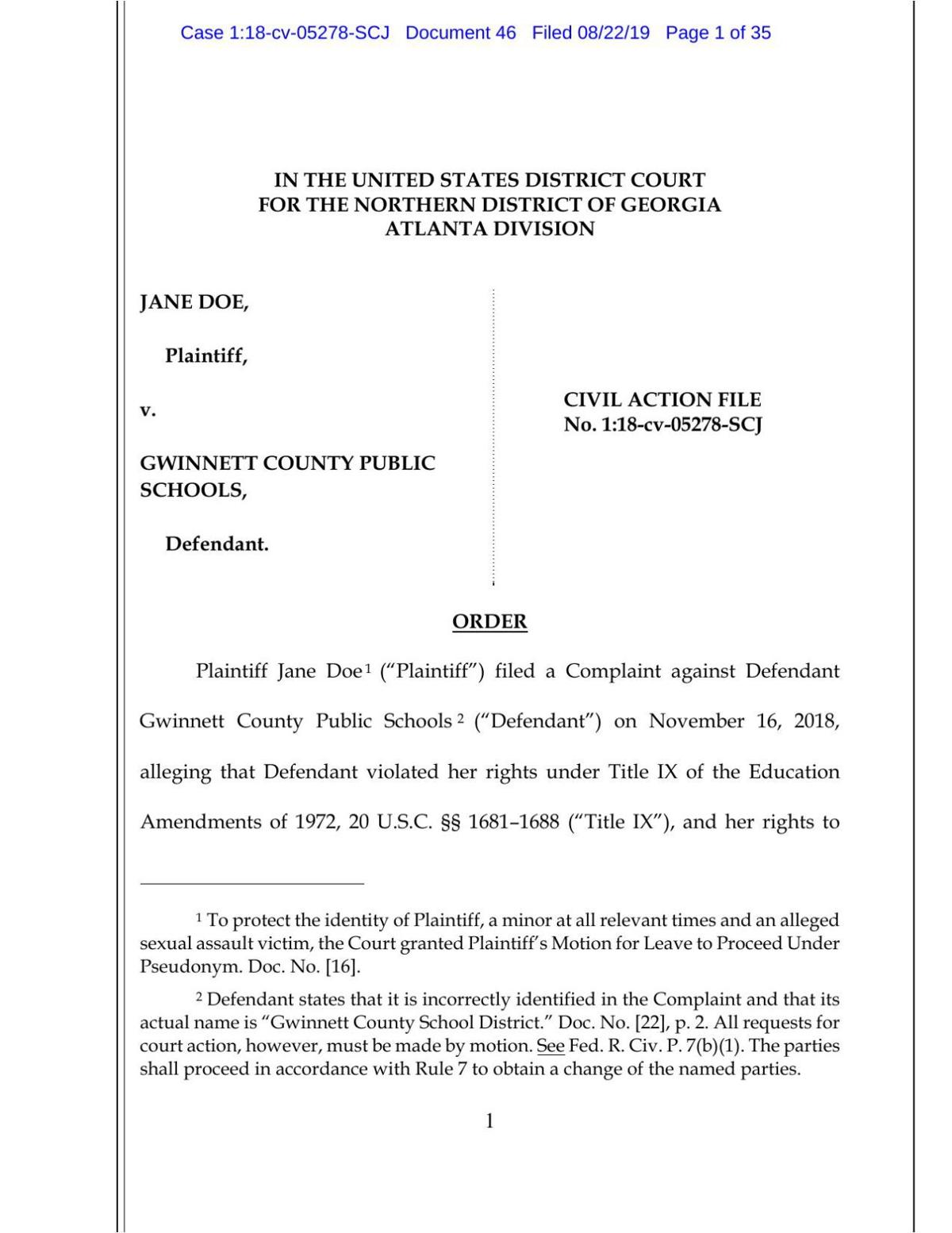 According to the suit, the victim was waiting for her mother to pick her up from school when the alleged perpetrator, referred to only as “MP” in the suit, “asked if she wanted to see the Ridge Vision News room” at Peachtree Ridge.

“Upon entering the RVN room, Plaintiff alleges that MP grabbed her hips, pulled her to him, fondled her buttocks and started pulling down her pants,” the suit said. “Plaintiff affirmatively demonstrated her lack of consent by pushing his hands away and saying, ‘No, stop!’ and ‘What are you doing?’ MP then restrained her in a chair, positioned himself above her, and forcibly kissed her. Plaintiff alleges that she was then subject to forced oral sodomy by MP.”

The following day, the victim reported the assault to her first-period teacher, who directed her to another teacher, the suit said. That second teacher took the victim to meet with Peachtree Ridge’s School Resource Officer, who involved three of the school’s assistant principals.

While the victim was being questioned, the suit alleges the SRO asked the victim a series of questions, including “What were you wearing?” and “Are you sure you didn’t want to have oral sex with him?” The suit also alleges school officials took the victim back into the RVN room and “insisted that she re-enact the assault for them.”

On Feb. 6, the victim didn’t attend school, though the suit said Peachtree Ridge officials asked that she come in for additional questioning.

“Plaintiff and her family complied, and she again was forced to recount the details of the alleged sexual assault to school officials,” the suit said. “Assistant Principal (LaShawnia) Stinson, who was in charge of the school’s attendance office, questioned Plaintiff with her stepfather present. (GCPS) had designated Assistant Principal Stinson as the Title IX Coordinator — a fact that she allegedly failed to relay to Plaintiff or her stepfather. Defendant also did not provide any information about the Title IX Coordinator on the PRHS website to properly notify parents and students.”

On Feb. 9, the victim again didn’t attend school, though was asked to come in the next day for a meeting. At the meeting, the victim was told she was being charged with violating the school’s sexual misconduct policy for performing oral sex on school property and was suspended for a week, the suit said.

“They also informed Plaintiff that they were not pursuing her sexual assault complaint against MP and that a disciplinary hearing against Plaintiff would take place in the presence of MP and his family,” the suit said.

At the disciplinary hearing, the suit alleges the victim was once again asked to re-enact the assault.

In addition, the alleged perpetrator’s attorney was allowed to cross-examine the victim, where he “attacked her credibility,” the suit said.

“According to Plaintiff, the cross-examination was so extensive that the hearing officer had to ask MP’s attorney to ‘tone it down’ in his closing statement,” the suit said.

GCPS’ attorney was also allowed to cross-examine the victim, the suit said. He reportedly deliberated for 10 minutes before agreeing that the victim violated the school’s policy, and when the victim said that she felt betrayed by the school, the district allegedly suspended her for a second time.

Because of the suspensions, the Georgia Department of Driver Services suspended the victim’s learner’s permit for a year.

When the victim returned from the school suspensions, other students allegedly called her a “whore,” “slut,” “liar” and “psycho,” the suit said.

“Because of the intolerable environment at PRHS and the lack of response to the hostility Plaintiff endured at school, Plaintiff’s family withdrew her from PRHS before the end of her sophomore year,” the suit said.

GCPS said in a 2016 statement that the district takes all complaints of sexual assault very seriously, and that the case was investigated by experienced educators diverse in gender and race, the Daily Post previously reported.

“After several days of investigation, the local school made a decision based on the preponderance of the evidence that the accused and the accuser both violated school rules, and that the accuser had not been the victim of a sexual assault,” the statement said.

The suit alleges, however, that GCPS violated the victim’s rights under Title IX, a 1972 law that bars discrimination based on sex in schools that receive federal money, and retaliated against her for reporting the alleged assault and subsequent harassment.

“I will say, this is a particularly egregious case of retaliation; she gets punished for coming forward within days of reporting and then punished again after the hearing, and ended up, because of Georgia law, even having her driver’s license revoked,” Kimmel told the Daily Post. “I mean, why would anyone report that they were sexually assaulted after seeing that? You’re basically silencing students from coming forward when they have suffered severe harassment.”

GCPS filed a motion in January of this year to dismiss the suit, challenging each component of its “alleged deliberate indifference.”

In Thursday’s ruling, the federal court said “such an approach, however, flies in the face of the notion that all events and circumstances must be considered ‘cumulatively,’” and determined that the victim’s allegations are sufficient enough to deny GCPS’ motion to dismiss on those grounds.

The court also ruled that the victim had provided sufficient evidence in her other claims to deny GCPS’ dismissal motion, something Kimmel told the Daily Post she was pleased with.

“I think the court’s ruling makes clear that the school district will not be able to sweep our client’s suit under the rug or escape accountability so easily,” Kimmel said. “To me, it’s not surprising that school officials would like to avoid a public recounting up their misconduct in court, given both their punishment of our client for the sexual assault she experienced and the national media spotlight her story has garnered.”

Kimmel said the goal of the suit, while it is to provide justice for the victim, is also to ensure no student is retaliated against for reporting an assault.

“(The victim) is very much looking forward to her day in court, and she feels like this ruling gives her a chance to shine an even brighter light on the systemic changes that have to be made within the school system so that other students don’t suffer in the way that she did,” Kimmel said. “She is very grateful for the outpouring of support she has received, but what she is hoping that will come out of this lawsuit is that school officials acknowledge that victim blaming and punishment is wrong. She’s hoping that meaningful changes that will begin to be made to ensure that this never happens to anyone again — that’s why she’s in this.”

When reached for comment, GCPS spokeswoman Sloan Roach said because the case is active, “we are not at liberty to comment on it.”

The gathering was to address the fallout and show support for a victim of an alleged sexual assault last year at Peachtree Ridge High School.

IN CASE YOU MISSED IT: Top stories in Gwinnett County — Week of Aug. 26

The Gwinnett County Sheriff's department is asking for nearly $2 million for next year's budget, Johnny Isakson announced he's stepping down a…