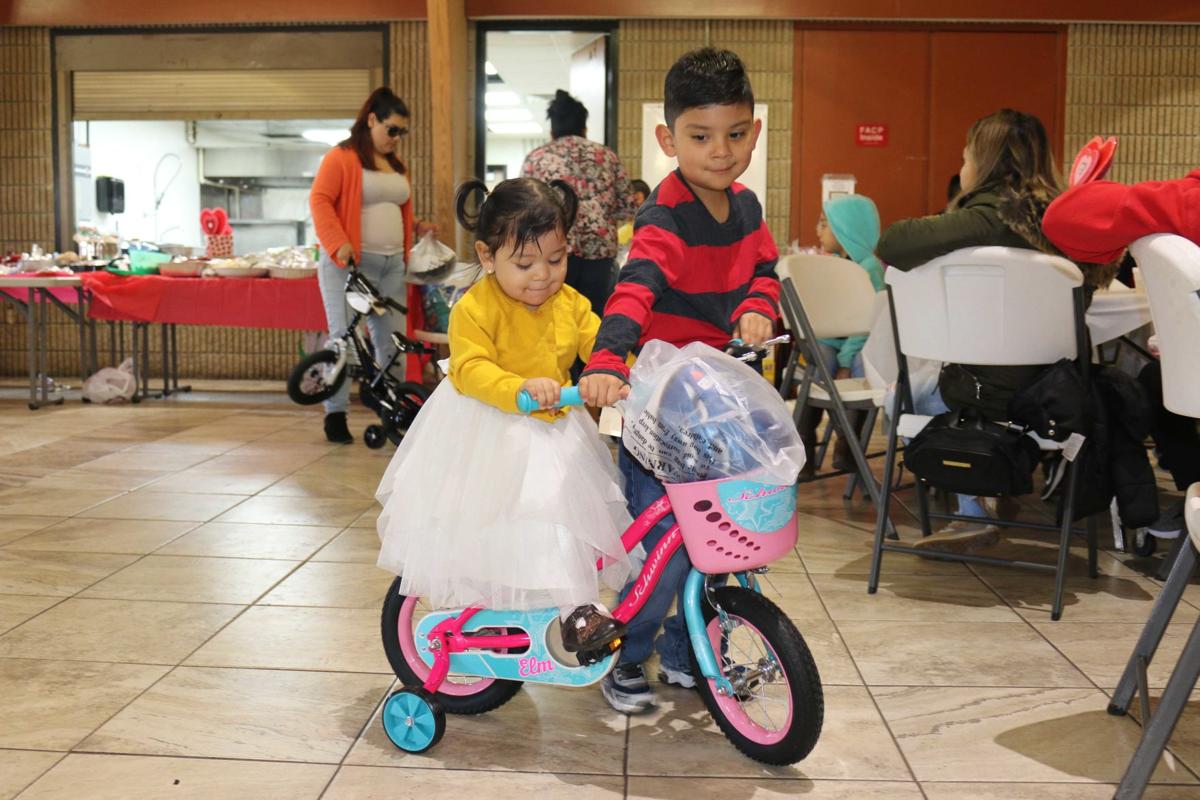 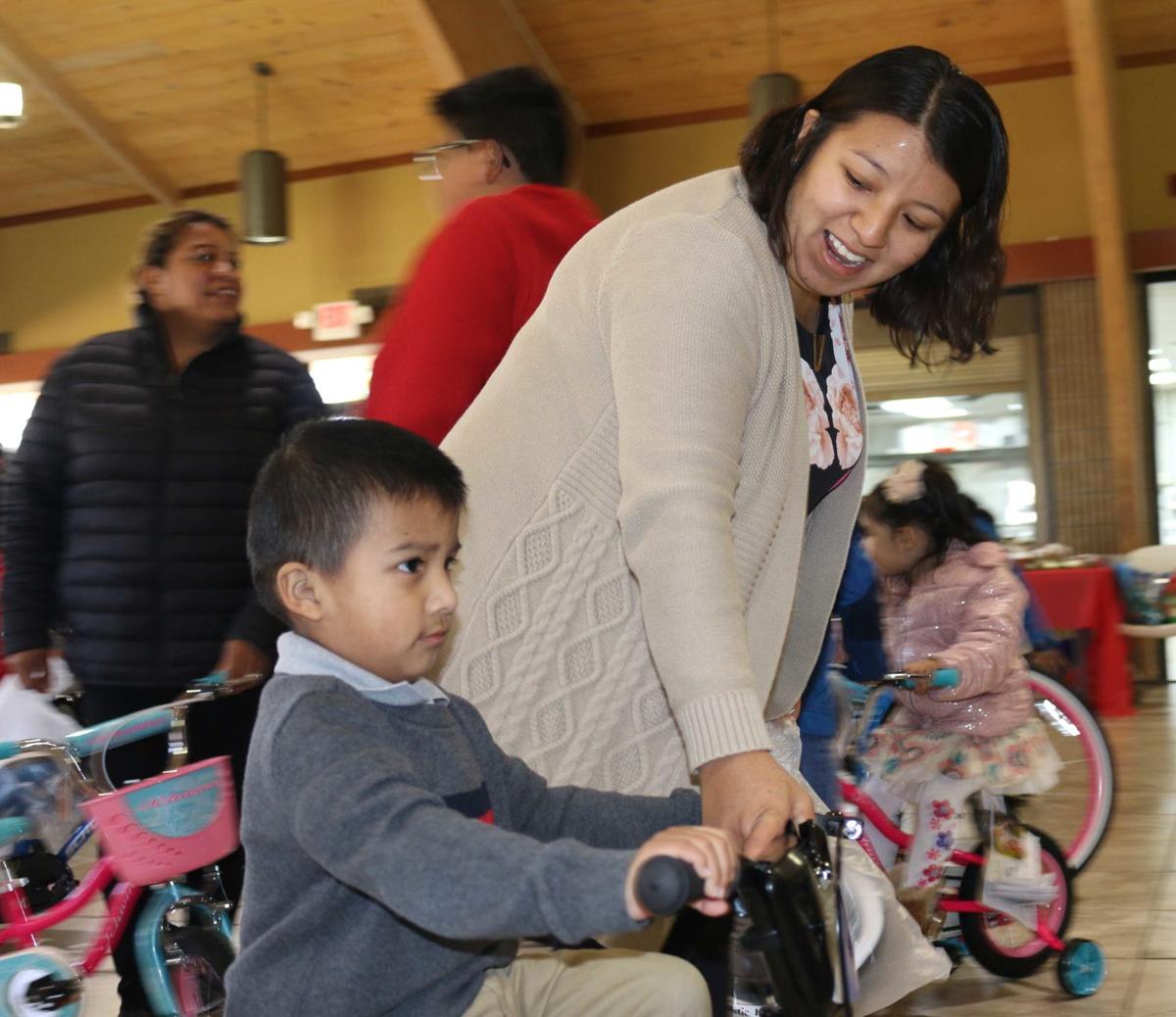 Cassandra Olmos teaches her son Gabriel Hernandez, left, how to ride his new bike on Friday at St. Patrick’s Catholic Church in Norcross. 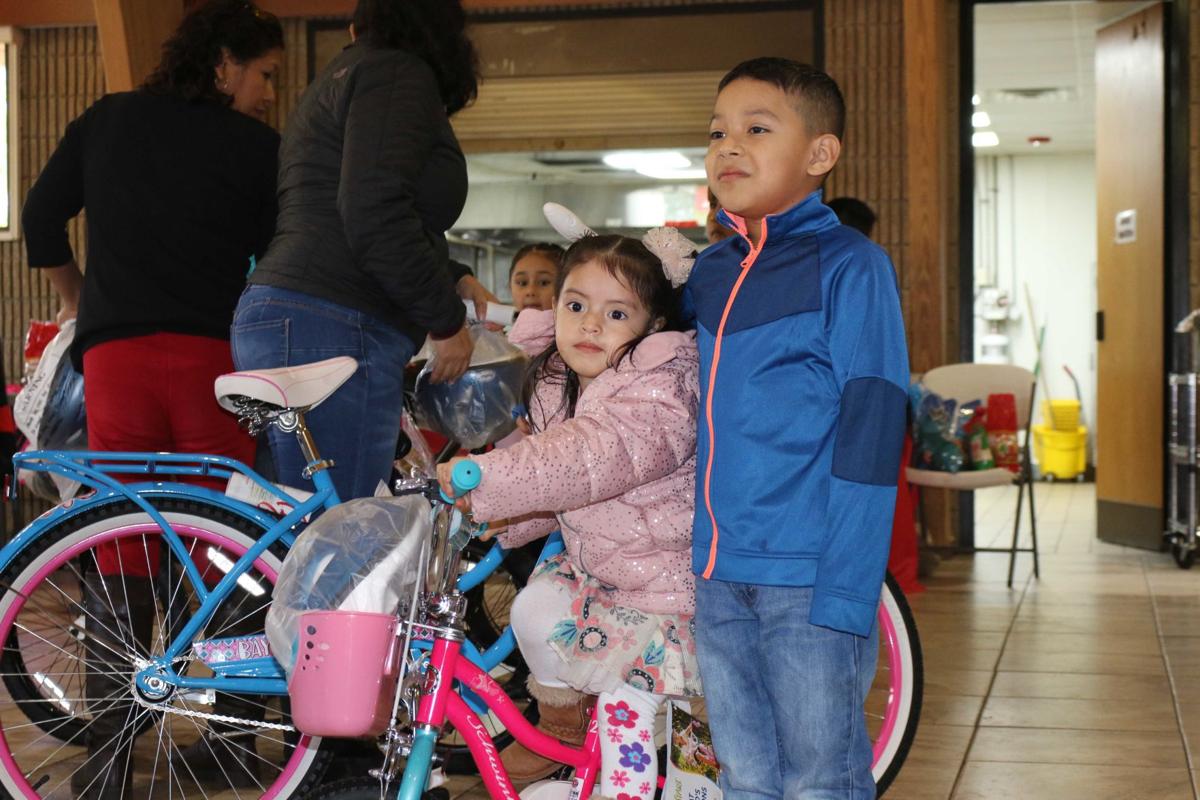 Children excitedly test out their new bikes on Friday at St. Patrick’s Catholic Church in Norcross. 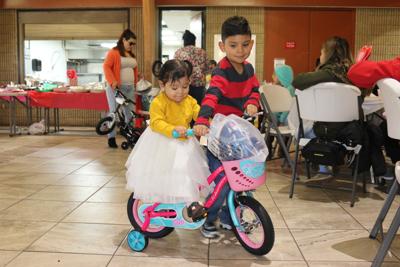 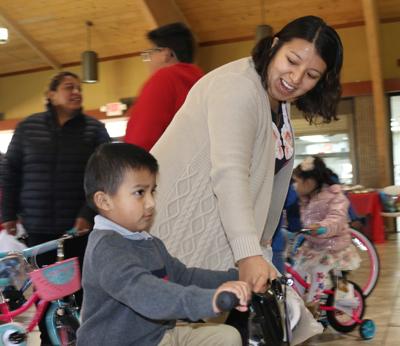 Cassandra Olmos teaches her son Gabriel Hernandez, left, how to ride his new bike on Friday at St. Patrick’s Catholic Church in Norcross.

Children excitedly test out their new bikes on Friday at St. Patrick’s Catholic Church in Norcross.

Gabriel Hernandez seemed to take to his new bike quickly on Friday.

The 4-year-old hurriedly put on his helmet and started scooting around on trailing wheels a spacious room inside St. Patrick’s Catholic Church in Norcross. His mom Cassandra Olmos said her 12-year-old brother rides his bike often, so Gabriel is glad to have one of his own.

“He had a little one, but he was kind of scared,” Olmos said. “My brother rides a bike, so he sees him and he wants to learn.”

Olmos takes Gabriel to St. Patrick’s almost every day for “Chispa,” an early-learning program in Norcross sponsored by Families First. Typically, Gabriel plays games with other children in the program, practices coloring, learns the alphabet or learns to count. On Friday, children and their families instead had breakfast and received brand new bikes, courtesy of Publix.

More than 400 bicycles were delivered across the Southeast this week after 1,600 Publix associates came together at the company’s annual conference to build the bikes on Tuesday. About 42 bikes were delivered to Chispa children on Friday in Norcross.

The initiative was a camaraderie project at Publix’s annual conference, Media and Community Relations Manager Brenda Reid said. But delivering the bikes also fulfills a corporate mission for the Southeastern supermarket chain.

“In Atlanta we found Families First and they’ve been longtime partners of ours,” Reid said. “We know they help a lot of families and we thought this would be a great marriage.”

Norcross made a good fit through Families First’s relationship with Publix. Families First is an Atlanta-based nonprofit with a mission to ensure the success of children in jeopardy by empowering families. It began as an orphanage 130 years ago and has worked to build resilient children and families in metro-Atlanta for decades.

Providing bikes coincides with Families First’s emphasis on health and wellness, which it seeks to introduce to children at a young age.

Chispa, the Spanish word for “spark,” is a daily program designed to socialize Hispanic children and prepare them for preschool from infancy to kindergarten age. Students not only learn the fundamentals they’ll need to be successful readers and problem solvers once they enter preschool, preparing them for kindergarten.

Gabriel and his classmates aren’t the only ones that learn. Olmos said Chispa parent educators provide courses to teach parents how to reinforce lessons at home.

“The most important thing for this program is to encourage the parent to have a successful transition from home to preschool and from preschool to kindergarten,” Parent Education Coordinator Soledad Ruiz said. “Our focus is to teach the moms how to teach their sons or daughters at home doing different activities.”

Data shows that, in Gwinnett County, more than 50% of kindergartens are starting school unprepared from a reading and counting perspective. This can be connected to low access to appropriate books for children in areas of the county, but Chispa also works to address the language barriers that could set students behind when they begin school. Simple instructions like putting on shoes can become confusing to a 4-year-old if he’s only been told to do so in Spanish at home.

The program is growing and mostly spread through word of mouth, but Olmos said early-learning programs like Chispa are uncommon in Norcross. Even if parents of young children know about the program, they may not have access to transportation to daily meetings. The program is also robust with a 20-person waiting list. Families First is looking to expand Chispa with additional funding through events such as Dining for a Difference, an annual fundraiser at the Georgia Aquarium on March 26.

Olmos said her son has benefitted from the program. Chispa teachers make home visits and quiz students with blocks and counting exercises. Meanwhile, Olmos is learning how to be her son’s first teacher so he’ll be prepared for his future teachers in a few whirlwind years.

“He gets excited to come to school,” Olmos said. “He knows that he has to go to school and has to pay attention.”

During her State of the County Address, Nash said Gwinnett County Public Schools and community partners, including the county's libraries and parks and recreation system, have been working on developing a "Gwinnett Early Learning Strategy."

Nearly 1,000 people attended Nash's speech, where she frequently referenced the "Gwinnett Standard" and highlighted six areas that she sees as priorities for the Gwinnett community to address.

Children excitedly test out their new bikes on Friday at St. Patricks Catholic Church in Norcross.