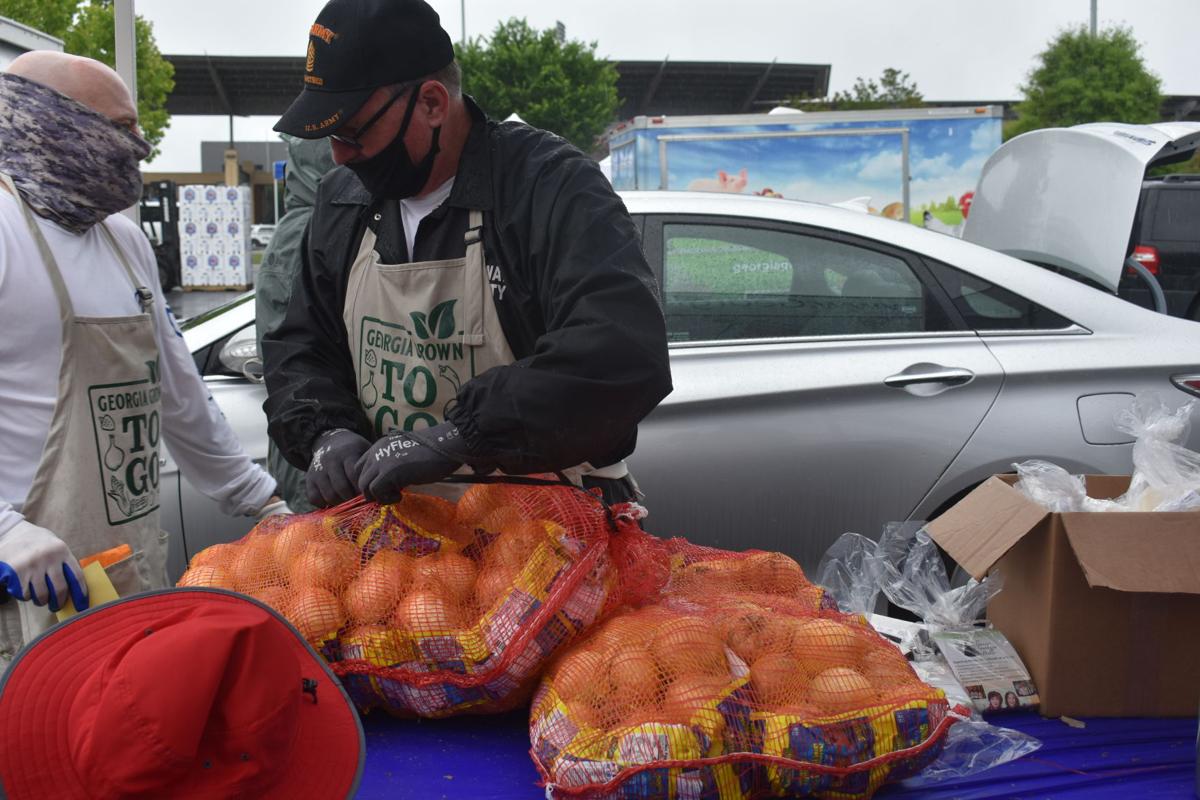 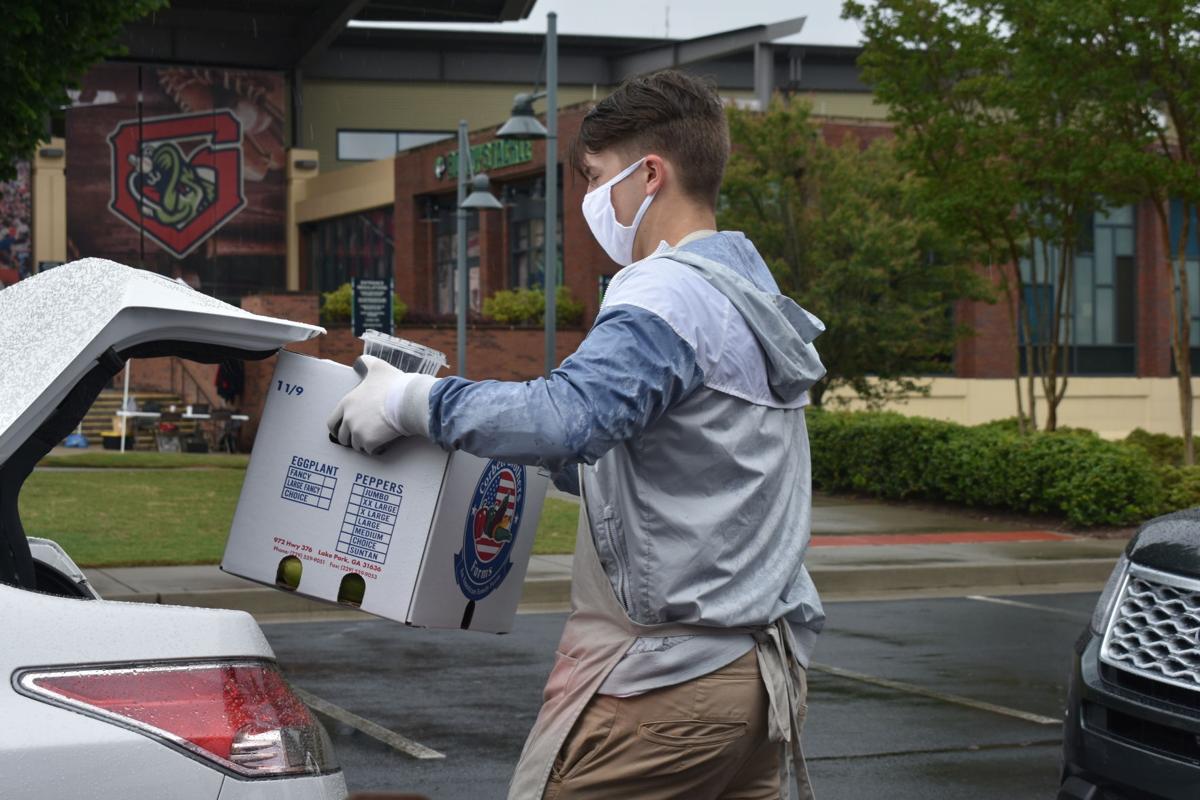 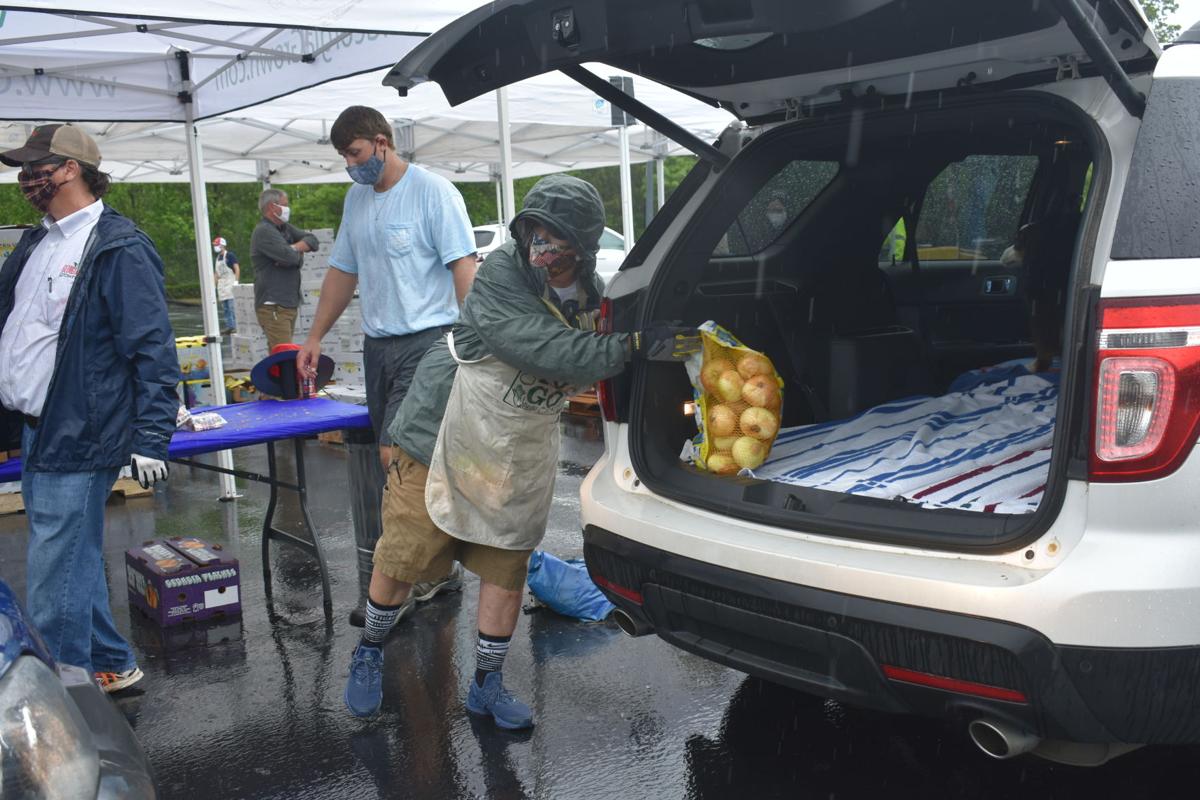 Sellers load containers of goods into customers’ trunks at a pop-up “Georgia Grown To Go” drive-thru farmers market in Lawrencville on Wednesday. 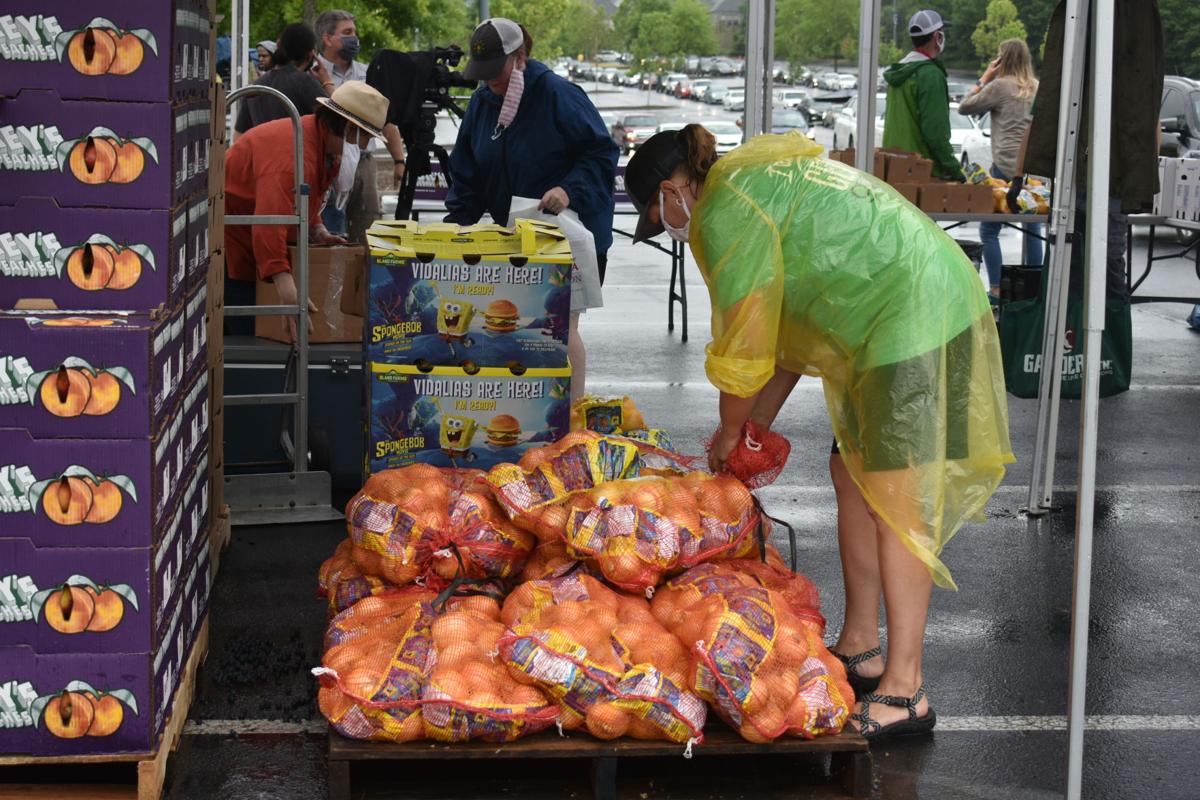 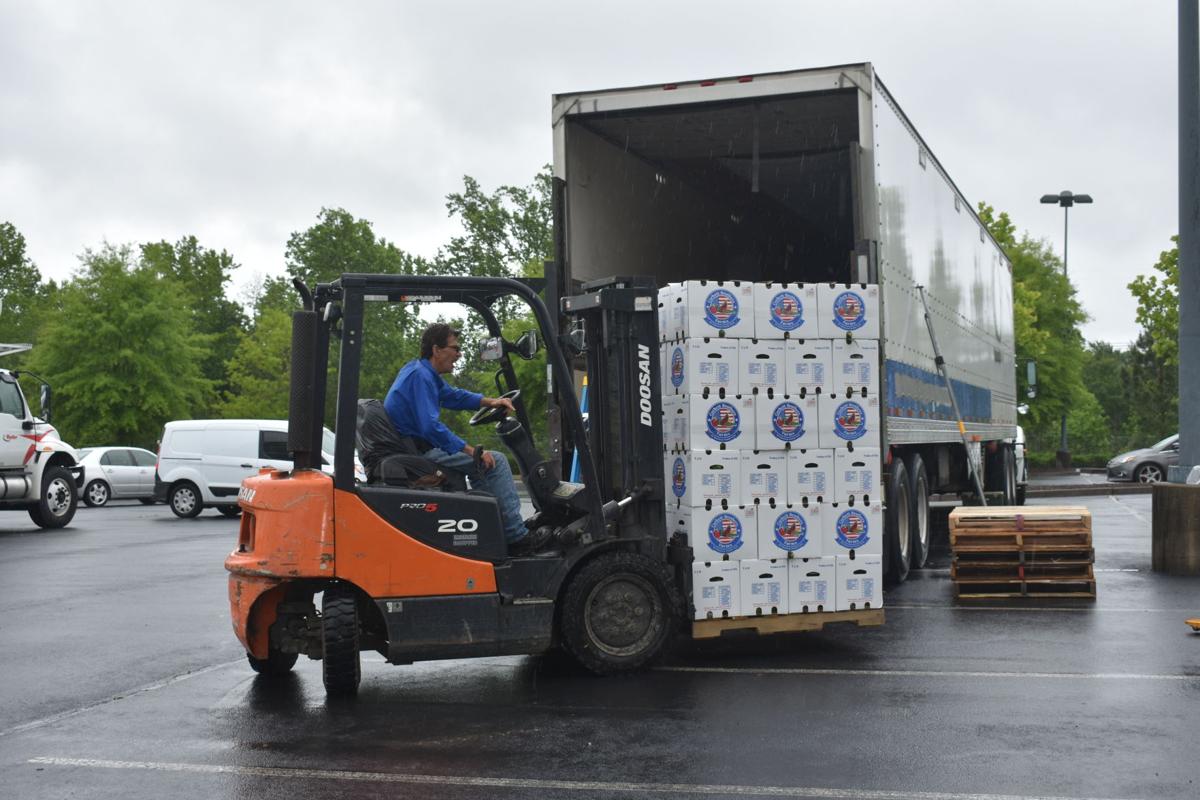 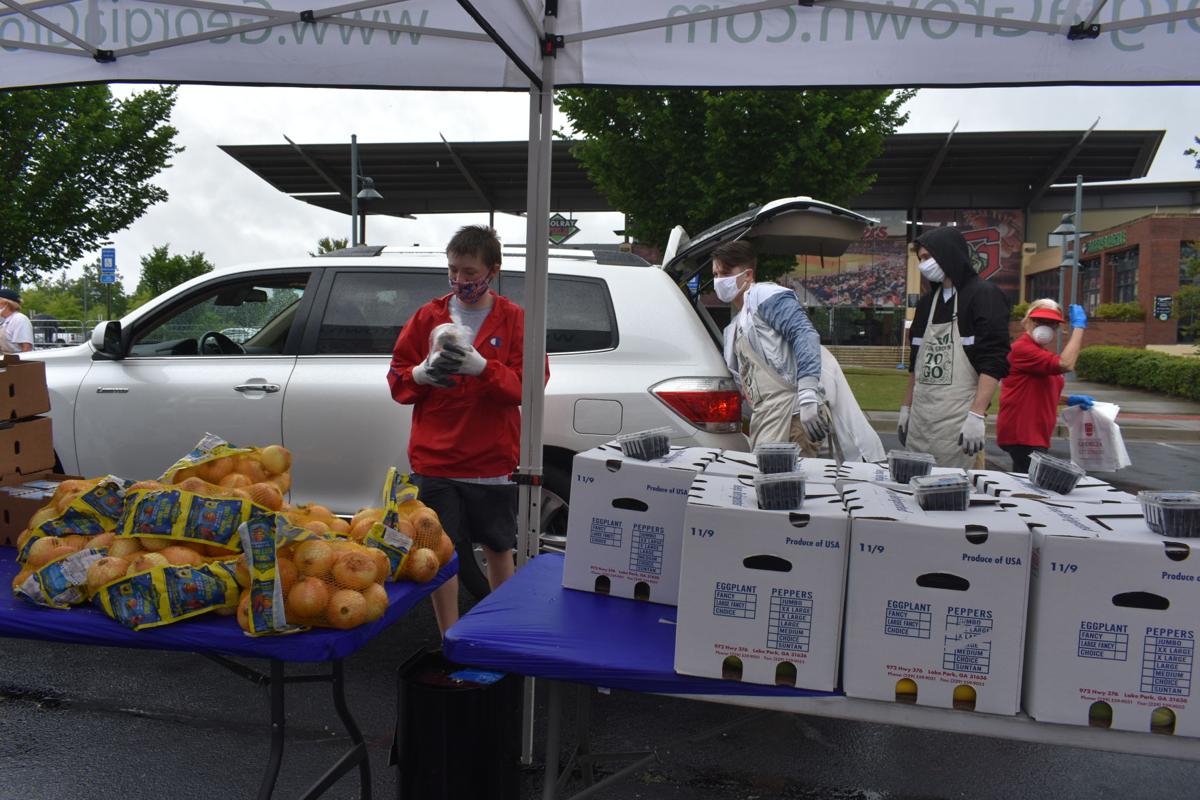 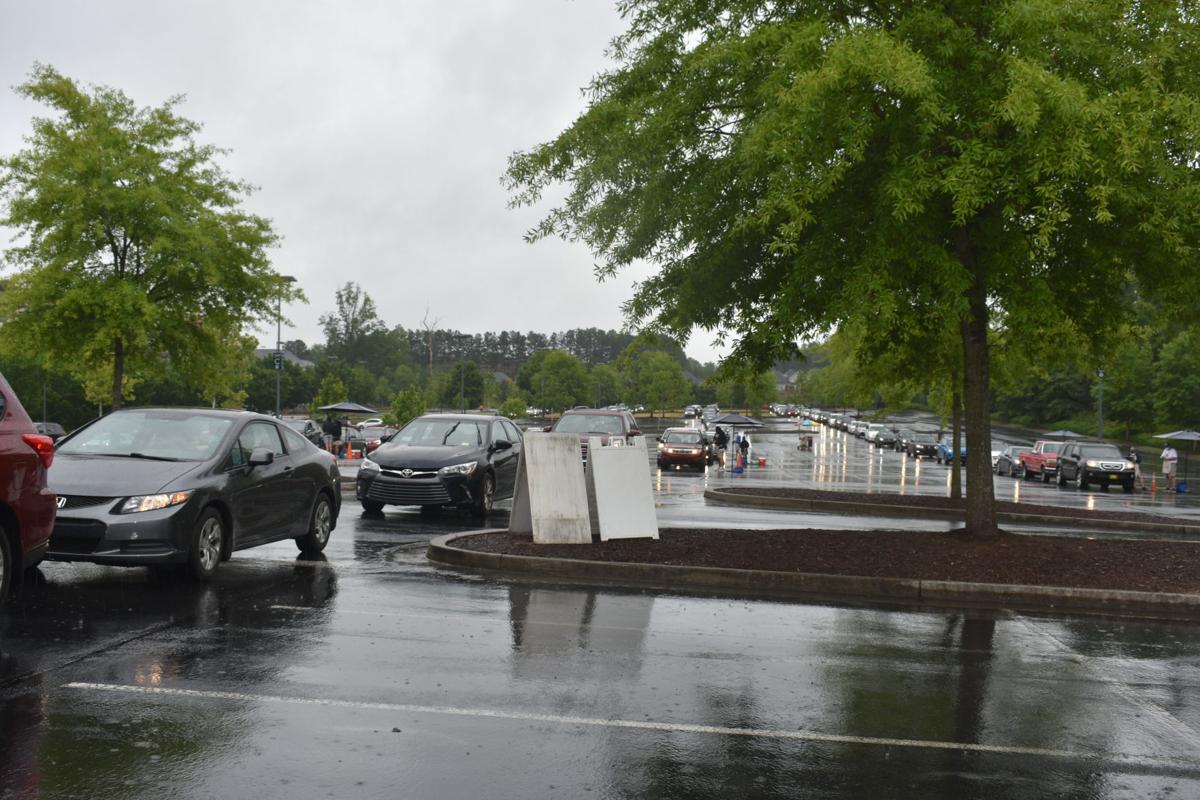 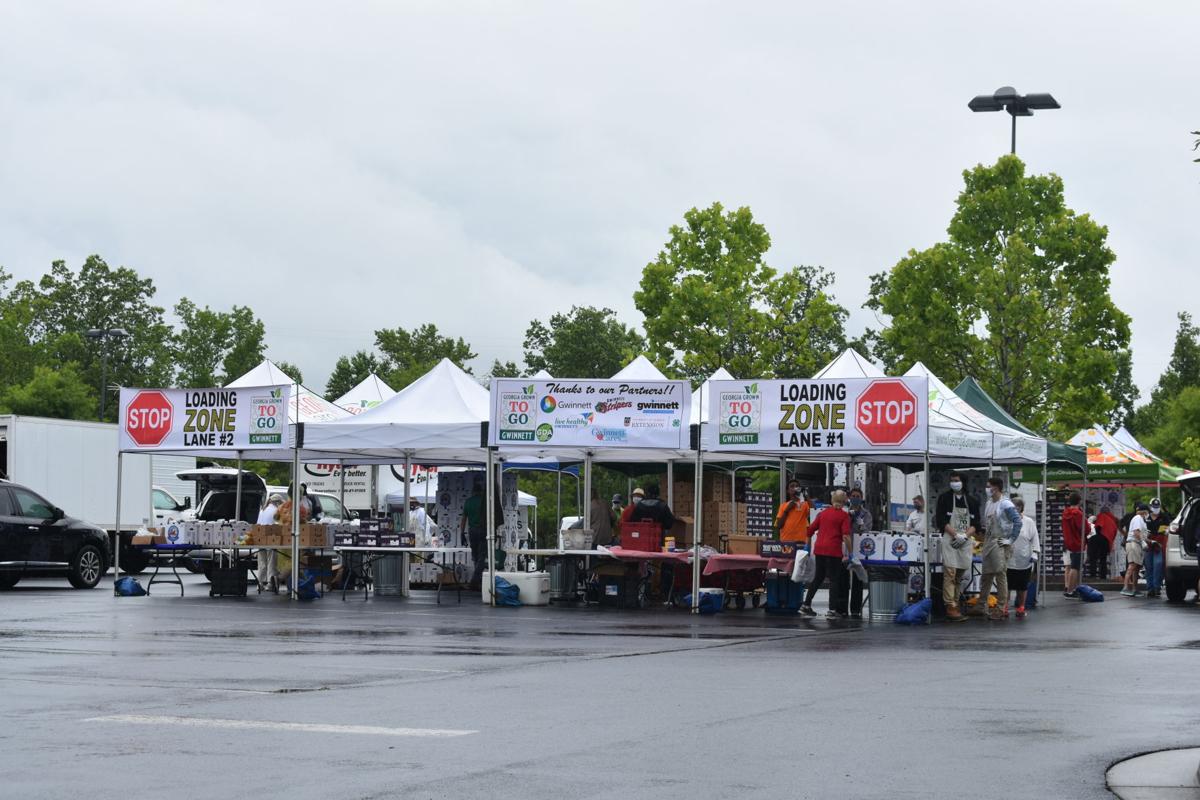 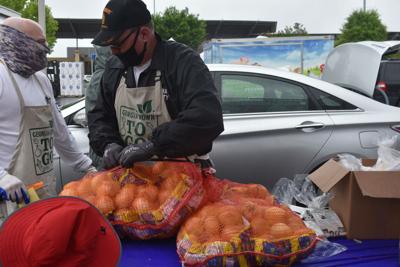 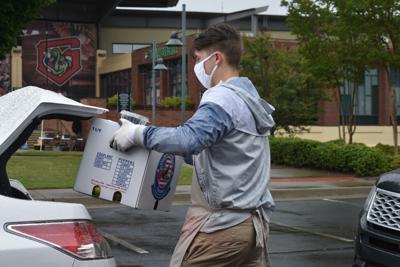 Sellers load containers of goods into customers’ trunks at a pop-up “Georgia Grown To Go” drive-thru farmers market in Lawrencville on Wednesday.

Gwinnett residents got a chance to support Georgia farmers on Wednesday. And the farmers made it easy — bringing their produce and products directly to the customers.

Coolray Field, home of the Gwinnett Stripers, served as the staging grounds that saw long lines of cars snake through the parking lot in pursuit of the produce. Car lines formed on either side of two large tents as volunteers quickly filled their trunks with boxes of fresh produce (and other products) from across the state.

The pop-up market was the Georgia Department of Agriculture’s third Georgia Grown To Go Drive-Thru Farmers Market. It was made possible with the help of Gwinnett County government, which acted as the host partner.

While the pop-up market was a boon for local residents hankering for fresh food, it was also a boost for Georgia farmers, who have been affected by the COVID-19 pandemic.

“First and foremost, we’re in season and when COVID hit we saw a lot of the standard food chains clog down a little so we’re being able to move some of the food to different areas,” said Paul Thompson, marketing division director for the Georgia Department of Agriculture. “It’s good to get these farmers up and letting folks meet them as well. We don’t want to see anything wasted, so we’re able to get it up here and help these guys and give them another opportunity to sell their produce.”

Farmers Jay Crosby of Tyllabell Farms in Willacoochee and Ken Corbett of Corbett Brothers Farms in Lake Park were two of the farmers who were on site Wednesday. There were six to eight farms represented at the market, and each had similar stories about the impact the pandemic has had on their industry.

Corbett said the biggest way his farm was impacted was by food service like restaurants being closed and not ordering produce. He typically grows bell peppers, cucumber, squash, eggplant, a variety of hot peppers and other produce. He brought 1,320 boxes of produce on Wednesday.

Crosby said the pandemic has hurt his pricing since chain stores are not buying the volume they normally purchase because of less foot traffic. Crosby grows blueberries, which have a season that lasts anywhere from mid-April to the first of July.

“These are all perishables,” he said. “They have a shelf life, so we’re kind of having to hold back and spoon feed them, per se.”

Crosby brought five pallets or 5,500 pounds of blueberries, to the farmers market on Wednesday. He said the Department of Agriculture did a great job in promoting the market and the farming industry.

Thompson said there were 2,300 mixed boxes of food at the farmers market, as well as 600 boxes of peaches, more than 430 pallets of blueberries, 500 mixed cheese bags and 100 containers of different sauces.

Items could be purchased separately, but the market also featured a farmer’s box that included four ears of corn, four cucumbers, four yellow squash, four zucchini, one bag of green beans, four bell peppers, one pint of blueberries and two pounds of onions for $36 on pre-order or $40 on site.

“This obviously helped with access to these types of foods,” she said. “It was convenient by just drive-thru, so it was no contact and we took some of the strain off the grocery stores and gave a variety of options for residents to try.

“In addition, UGA Extension was here passing out recipe cards on how residents can preserve or prepare these foods so that nothing goes to waste. It’s all around a good family or neighbor activity. Coming together to share a meal is very important.”

Jorstad said the county is hoping to get a second date, if possible, to offer a different assortment of produce for residents.

“We’re excited to offer these opportunities to our residents to not only support their Georgia farmers, but to have access to fresh and nutritious foods,” she said.

Gwinnett County, the Gwinnett Stripers and the Georgia Department of Agriculture will team up again next week to host another Georgia Grown To-Go market in the county.

Gwinnett residents who want to sign up in advance to get food at the Georgia Grown To Go market that will be held at Coolray Field on Thursday have until Wednesday afternoon to do so.

For the second time since May, the Georgia Grown To Go Farmers Market at Coolray Field gave the community an opportunity to pick up fresh produce like watermelon and cantaloupe, while supporting Georgia Farmers impacted by the coronavirus pandemic.

How do I find out when these are taking place.