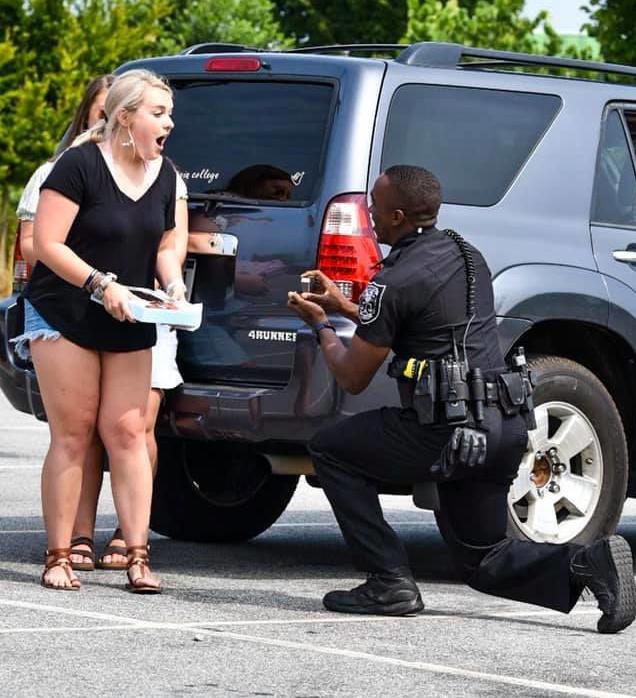 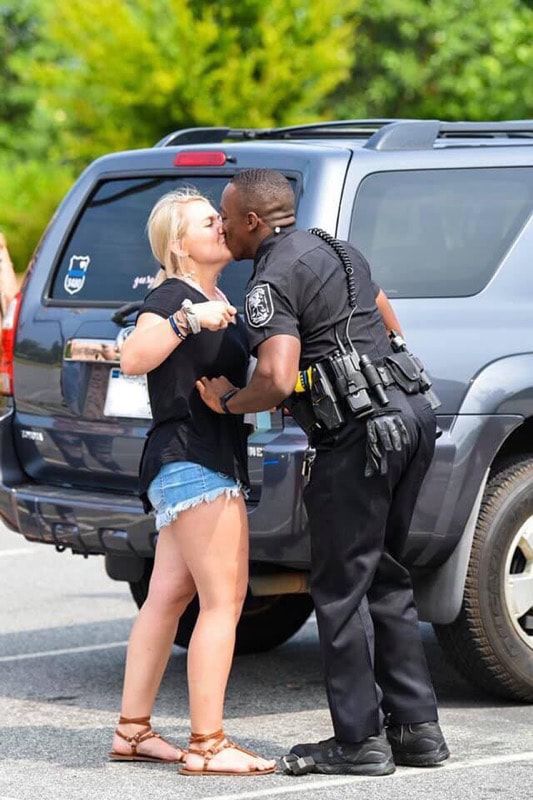 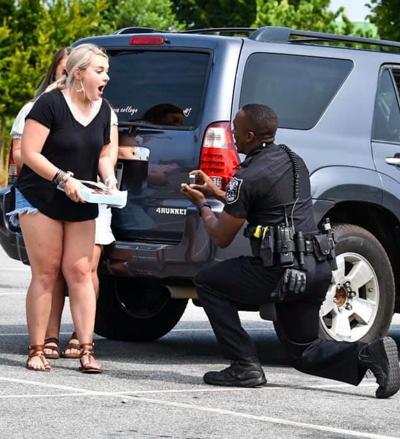 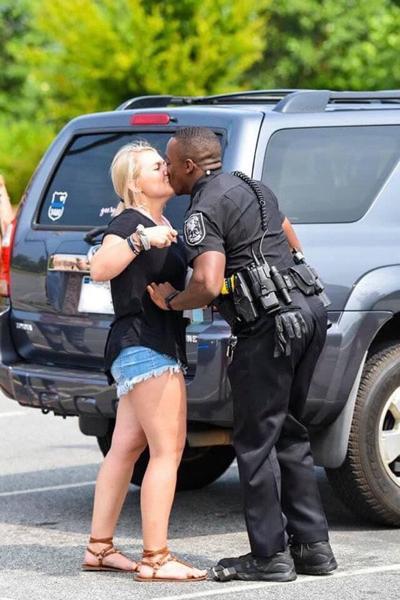 Like most people who see blue lights in their rearview mirror, Alexis McCart was slightly anxious when Lawrenceville Police Department Officer Michael Peterson pulled over her car Tuesday afternoon.

“I was so nervous; I didn’t know what was going on,” McCart said. “Then (Peterson) got us out of the car, and I was like, ‘Why is he doing this? What is going on?’”

What McCart didn’t know was that moments later, her heart would be beating a little bit faster — and that she’d soon be accepting a marriage proposal from her boyfriend, DeKalb County Police Department Officer John Heart.

“I turned around and there he was, and I just started bawling,” McCart said. “I was in such shock — you can tell by the picture. I literally had no clue.”

Heart’s traffic-stop proposal, which was aided by Peterson and another Lawrenceville Police Department officer, Patrick Rose, was a last-minute plan, Heart said. Both he and McCart are Gwinnett residents.

While he’d been tossing around proposal ideas for the past week, it wasn’t until Tuesday afternoon, just hours before he popped the question, that he finally formalized scheme.

“I was bouncing between three different options, but it was Patrick who really gave me the idea,” Heart said. “The main problem was Lexi was not going to be driving — her friend was — so we had to figure out how to make that work out. It was also a matter of me getting off work in time, but I just left an hour early and got to Lawrenceville as fast as possible.”

McCart, who had grabbed a bite to eat with her friends as Universal Joint, was completely oblivious to the plan, which required her friends to stall her.

“They were just trying to delay everything, because she was just ready to get back home,” Heart said. “But I get to Lawrenceville, I get to the police station and hop in Patrick’s Mustang and he takes me to the spot where she’s supposed to get pulled over. At that time, we’re sitting there waiting, I’m anticipating it and nervous as all get-out, and I finally see the blue lights come on and it’s her car and her friend’s driving it. (Peterson) made the traffic stop, and was eventually able to get everyone out of the car, including Lexi.”

Because routine traffic stops don’t usually require vehicle occupants to exit the car, Peterson had to be creative, and pretended police were looking for suspects who had been at Walmart.

“I knew something was funky because he just didn’t act normal — he acted like he knew we were (at Walmart), but I was like, ‘We weren’t there!’” McCart said. “Then he got us out of the car and asked, ‘Who’s Ms. McCart’ and I was like, ‘How do you even know my name?’ Then he was like, ‘Well anyways, happy birthday’ — my birthday was Monday — and I was just so confused.”

That’s when McCart’s friend handed her a birthday present with her soon-to-be changed name on it.

“It said Mrs. Alexis Heart,” Heart said. “By that time, when Lexi read the (present), she was like, ‘What’s going on?’ and she turned around and there I was on one knee.”

McCart, who accepted the proposal, said she and her fiancé don’t have a date set in stone yet, though they’re thinking of Oct. 4 — a play on 10-4, the universal police code for “you got it.”

“I definitely want to do a fall wedding, and with football we can’t get married on Saturday,” McCart said, “so I was thinking about Sunday and how cute would it be to do 10/4.”

FALCONS NOTES: No Atlanta players opting out of 2020 season

St. Louis Cardinals have another series postponed because of positive coronavirus tests