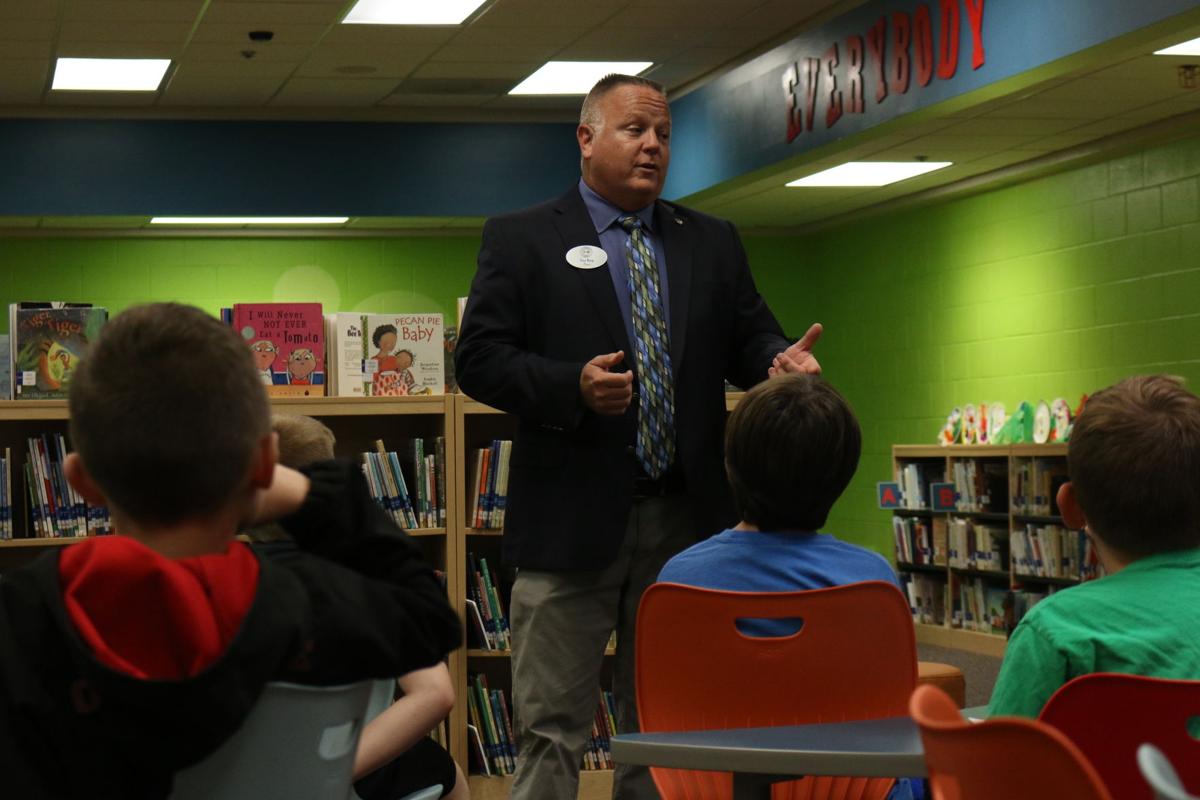 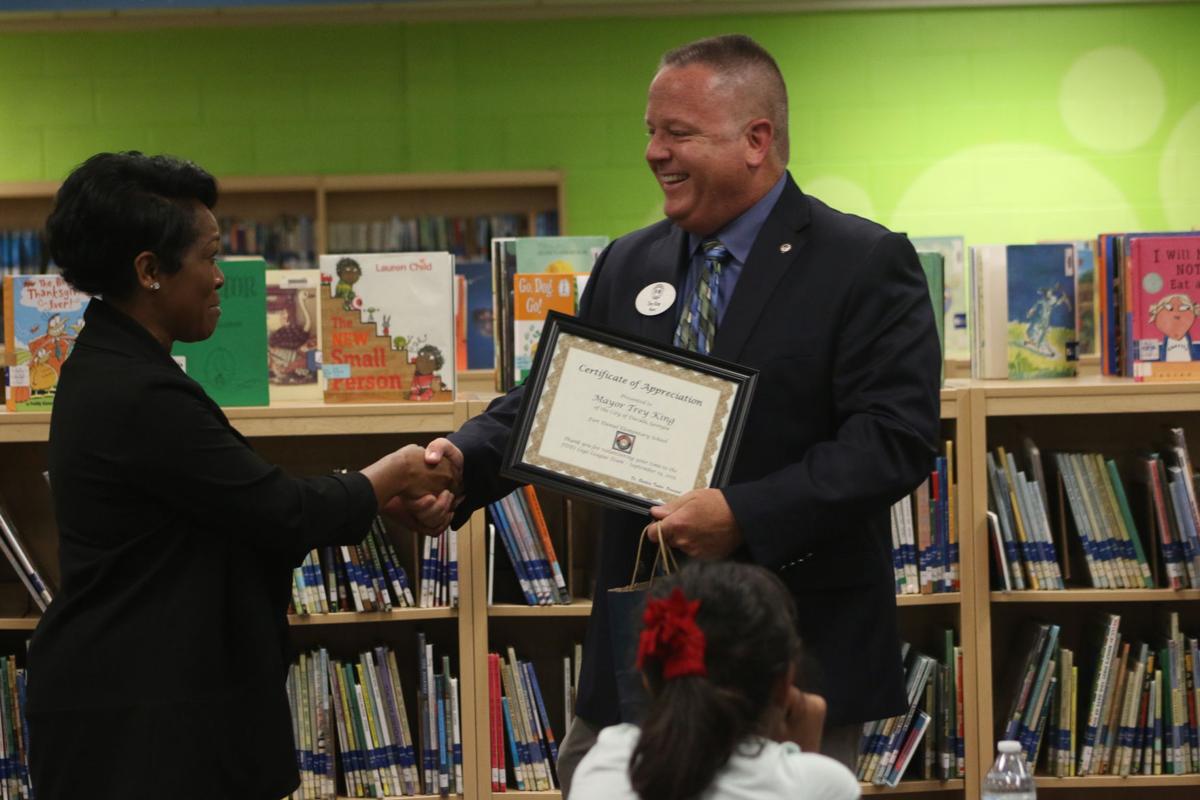 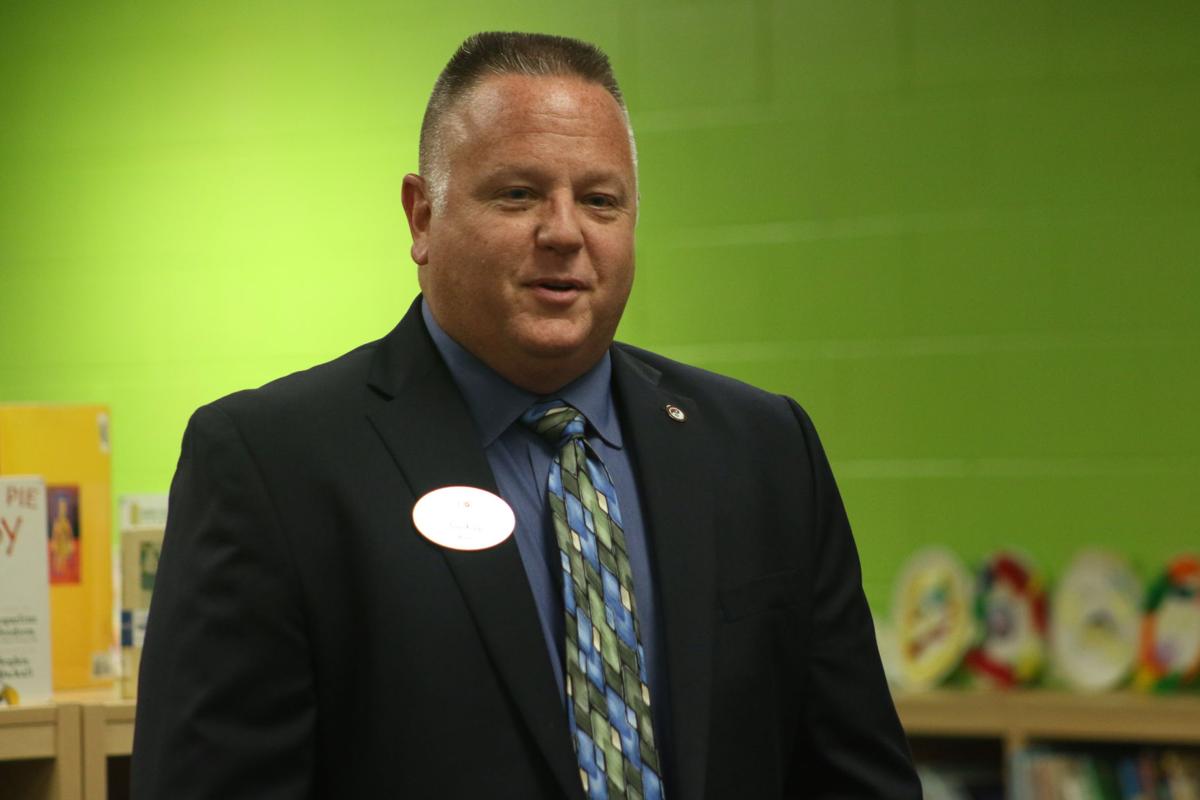 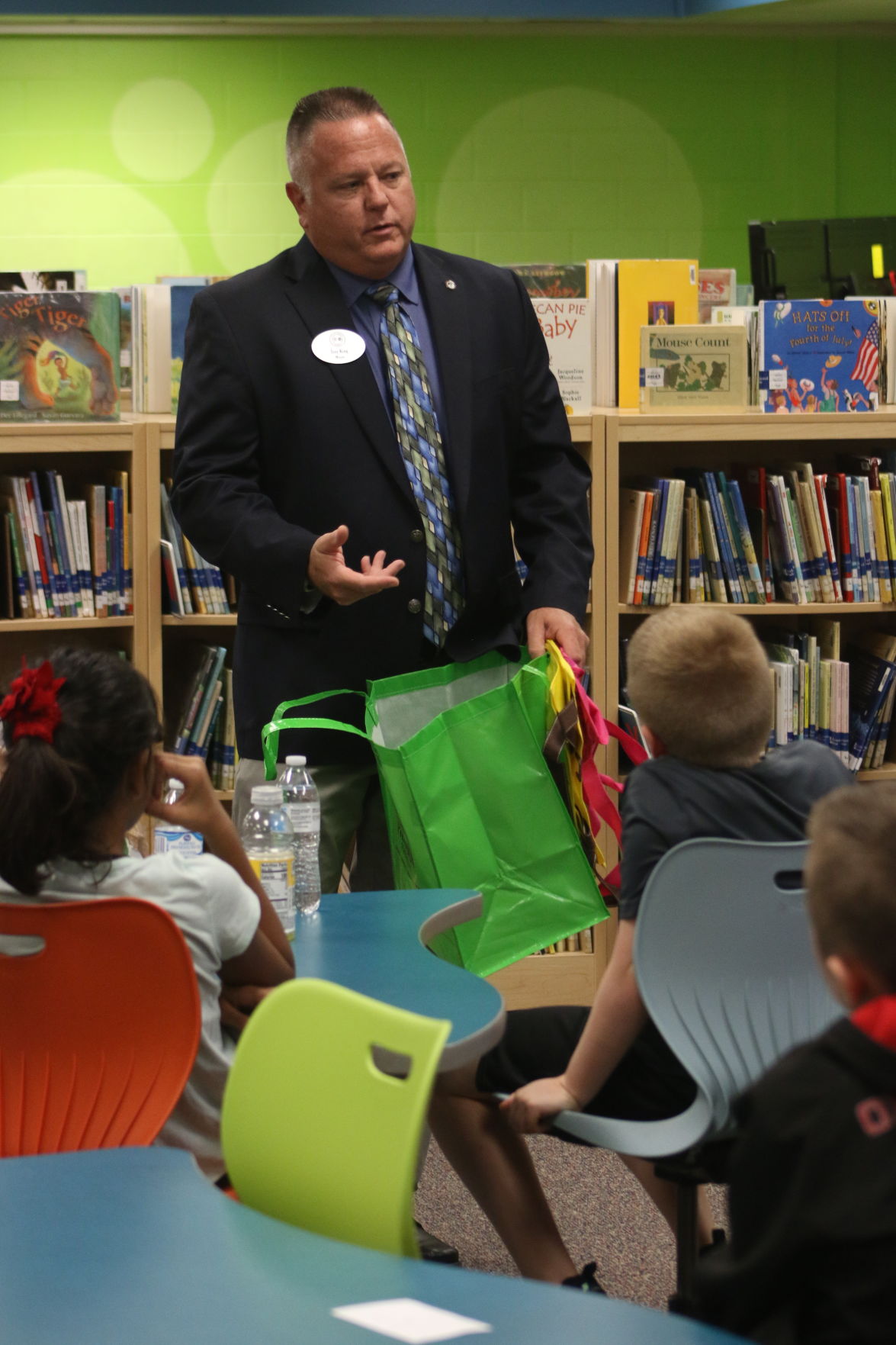 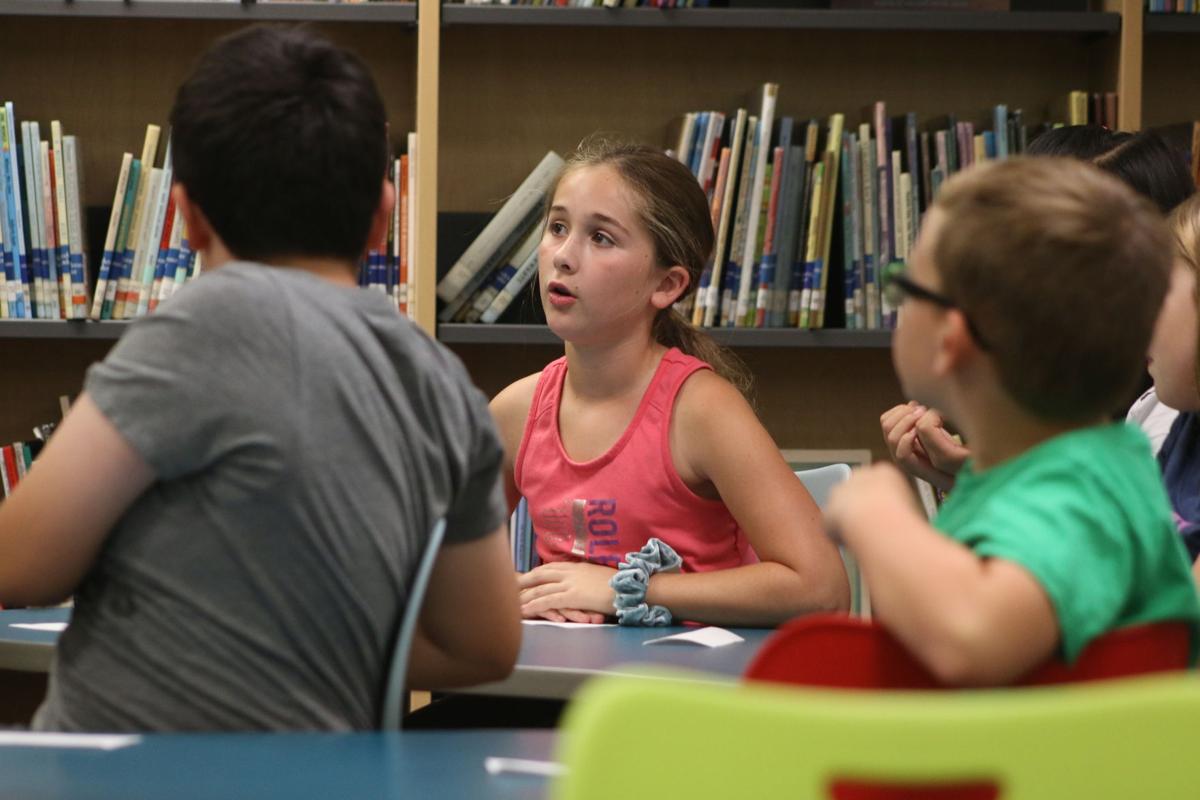 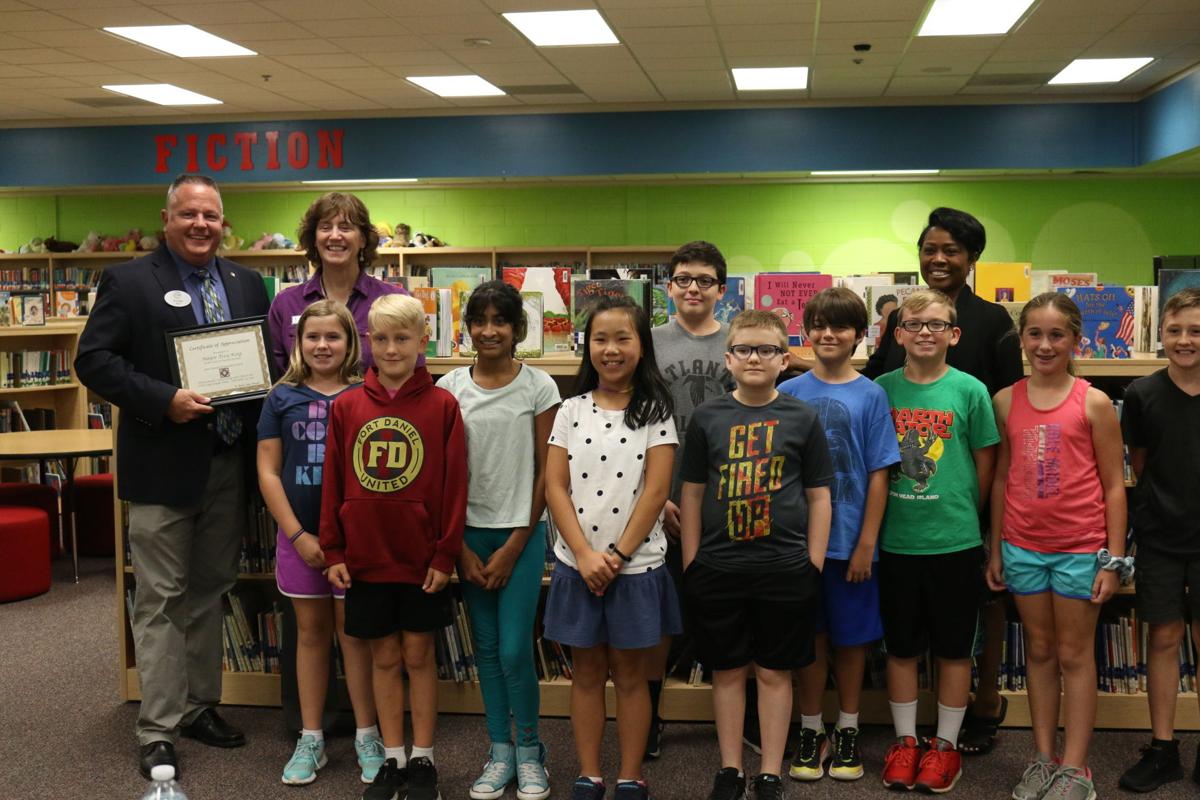 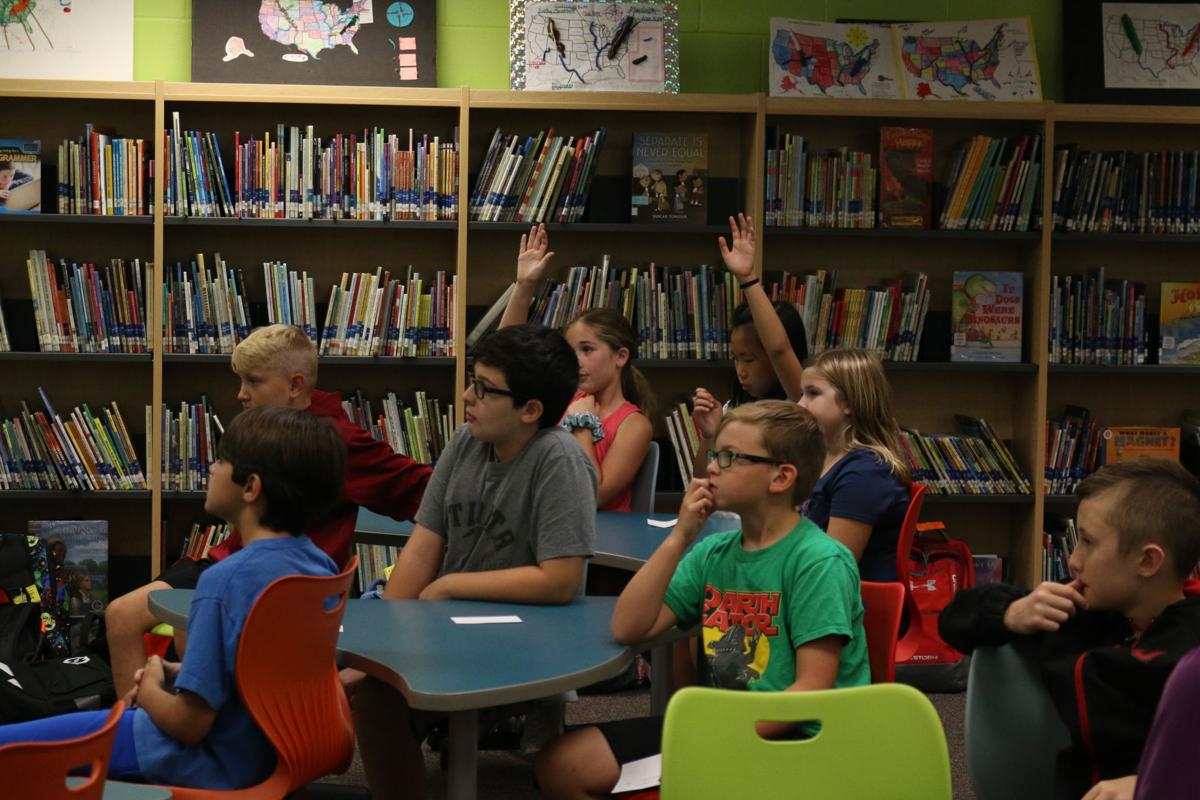 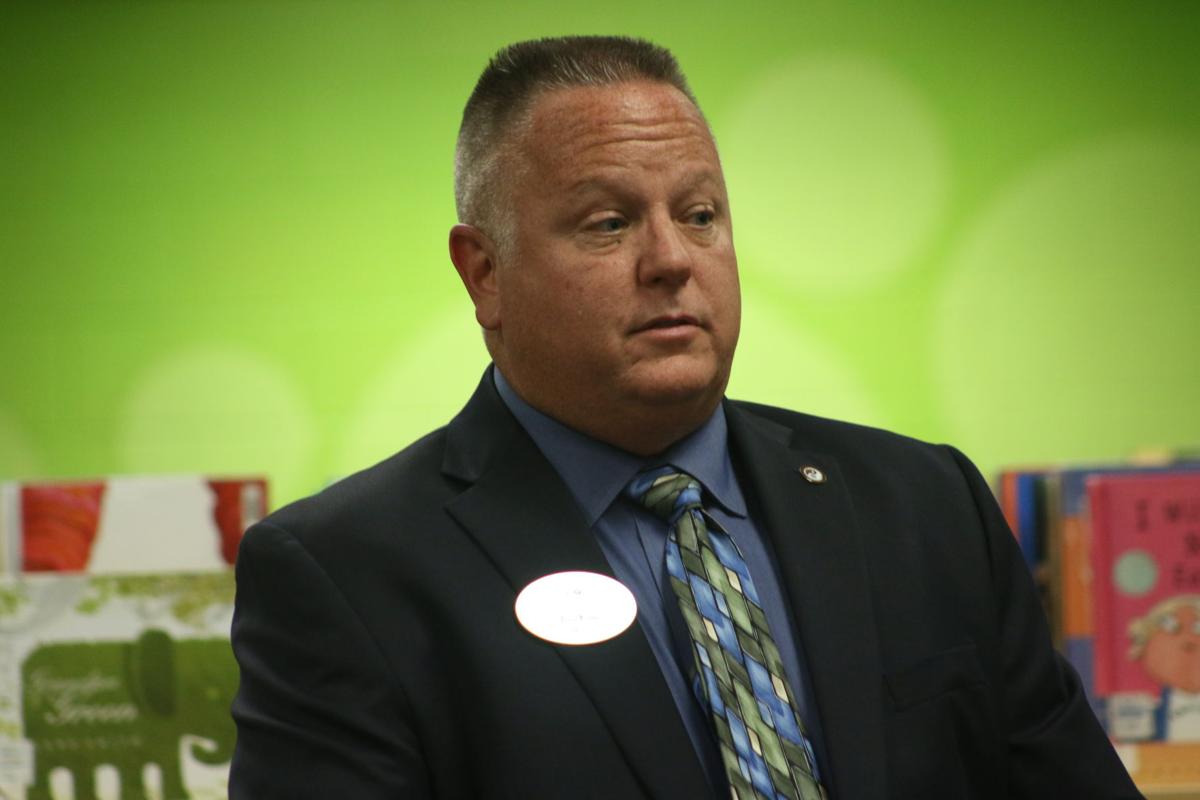 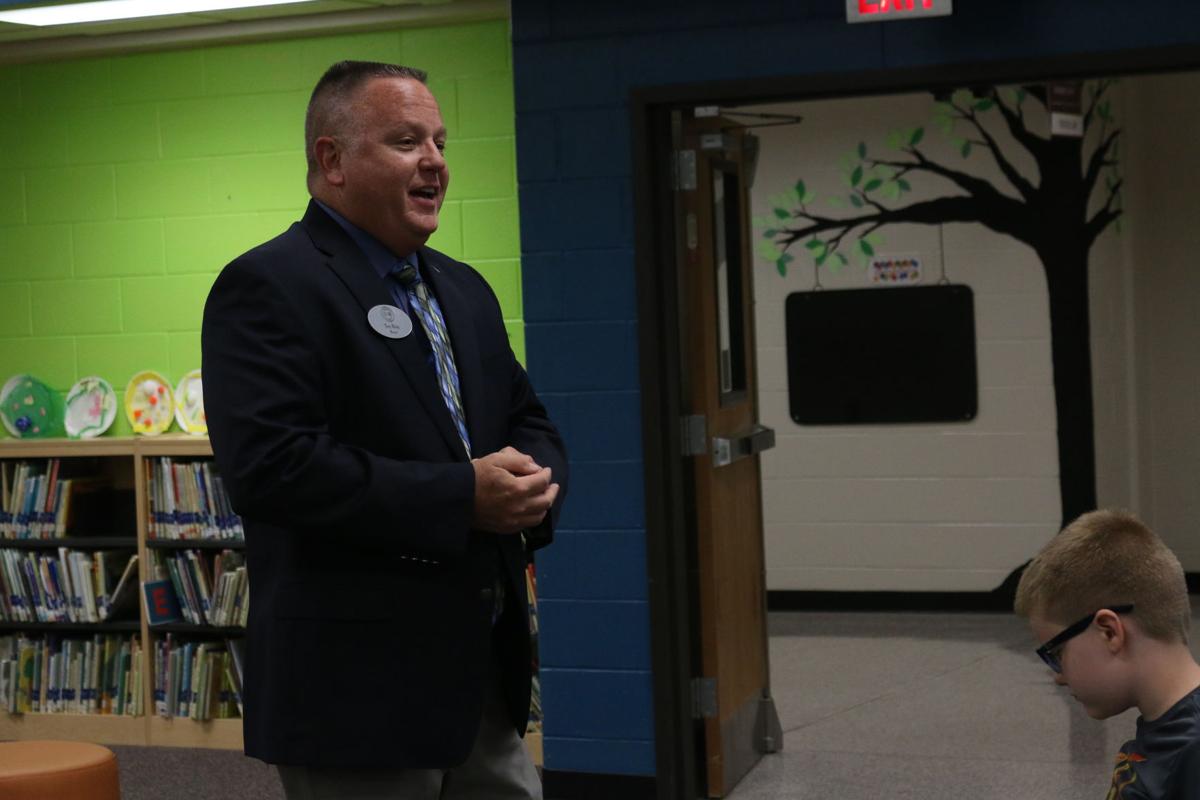 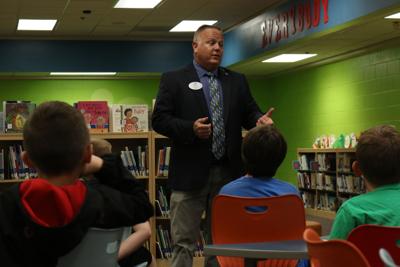 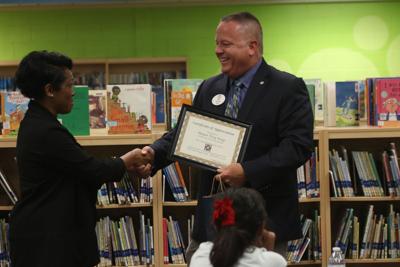 Dacula Mayor Trey King was like a celebrity to members of Fort Daniels Elementary School’s LEGO League Club when he visited the students in the elementary school’s media center after school.

Students — mostly fourth and fifth graders — said he was the most famous person they’d met. King seemed humbled at the thought. It’s perhaps something he’s still getting used to roughly six month into his role as the east Gwinnett County city’s mayor. King came to Fort Daniel Elementary School from his day job as a chemistry teacher at Collins Hill High School.

King was at Fort Daniels that day to help students with a project. LEGO League clubs devise solutions to real-world problems that can be solved by engineering and programming a LEGO robot to complete tasks. Who better to ask about problem-solving in Dacula than the man who does it every day?

“You want to have your homework done before the teacher asks for it,” King said to the elementary schoolers. “Not, ‘Can a turn it in tomorrow for a few points off?’ We want to be ahead of the game and be proactive and work for solutions to what we see as a coming problem.”

Students asked King about potential problems with pollution, homelessness and traffic in the city. King said he was delighted give young students examples of how they can help. It’s why he spends long days as both a mayor and a teacher.

King’s public service career began as a member of the zoning and planning appeals board in Dacula in the early ’90s. When that dissolved, he was later appointed to the city’s planning commission on which he later ascended to planning commission chairman. That was the position King most recently held before being appointed mayor in place of Jimmy Wilbanks, who died after a lengthy bout with cancer in January.

King was approached by members of Dacula’s City Council about possibly being appointed to the position. There wasn’t much doubt in King’s mind regarding his decision.

At various times in his civil service career, King served as a member of the Steering Committee for the Comprehensive Land Use Plan and as a City Council member. It’s not the first time King’s held a distinguished role in municipal government. He said in the mid and late ’90s he served as a member of the Dacula City Council and as Mayor Pro Tem. That experience made him a logical choice to step in as Dacula’s mayor.

King is a native of Augusta who graduated from Stephens County High School. He attended Young Harris College and has lived in Dacula for 26 years. He also felt an itch for teaching. King’s first career after receiving a college degree was as a retail pharmacist. After 16 years in the industry, King decided he could serve his community better with a different career.

“I thought, ‘If I was going to pursue a career in teaching, I’d better get started,’” King said.

He’s known Collins Hill principal Kerensa Wing since she was a coach at the Suwanee-based school. She said she’s observed King’s leadership skills and ability to connect to his students take shape without his two jobs conflicting.

“That practical work experience has been helpful translating chemistry to kids,” Wing said. “He’s one of our team leads and helps work with other teachers. I guess his leadership skills carry over in that way.”

King said the school and its administration continue to be supportive of his professional balance even after he stepped into the mayor’s office at Dacula City Hall.

An average day for King starts at 5 a.m. He leaves for Collins Hill by about 6 a.m. and sometimes won’t be home for more than 12 hours. King teaches college prep chemistry during the day and will sometimes spend his lunchtime — shortly after 10 a.m. at Collins Hill — addressing Dacula city matters. Once the school day is over at 2:45 p.m., King heads to Dacula City Hall and is home sometime later that evening. King said the idea of customer service carries over the most between his role as an elected official and being in a classroom. While he builds relationships with businesses and county officials in his role as mayor, King said he’s also focused on facilitating relationships between parents, students and the school.

“When I mentor new teachers, I tell them, ‘Get ready for the most intense customer service job you’ve ever had,’” King said.

Dacula is a small city that’s getting bigger, and that’s at the forefront of King’s mind roughly six months into his term as mayor. He and city officials are working to develop ways to alleviate traffic in the area, particularly in the mornings and afternoons when Dacula Middle School and High School commuters clog the roads.

“The intersections worked OK back in the day,” King said.

He pointed out two projects that Dacula is collaborating to complete with the Gwinnett County and Georgia Departments of Transportation that can help alleviate some of the city’s most congested areas. A bridge renovation project at the intersection of Dacula Road and Georgia Highway 8 will expand the existing two-lane bridge into a five-lane bridge. The second project will be to create an expanded interchange at Harbins Road and Georgia Highway 316.

King recognized the process of developing an expanding city as one with no end in sight.

“As more people move to this area, that will come just in the knick of time before we have to (focus on) something else,” he said.