In the complaint, which was filed Thursday, King asked that Fosque immediately apologize to him during a board meeting, requested that the Board of Commissioners “take out an advertisement in the legal organ of Gwinnett County” apologizing to him, asked that Fosque be fined an undetermined amount and requested that he be granted “any further relief deemed just under the circumstances.”

King has accused Fosque of violating six of the 16 ethical standards listed in the county’s ethics ordinance. 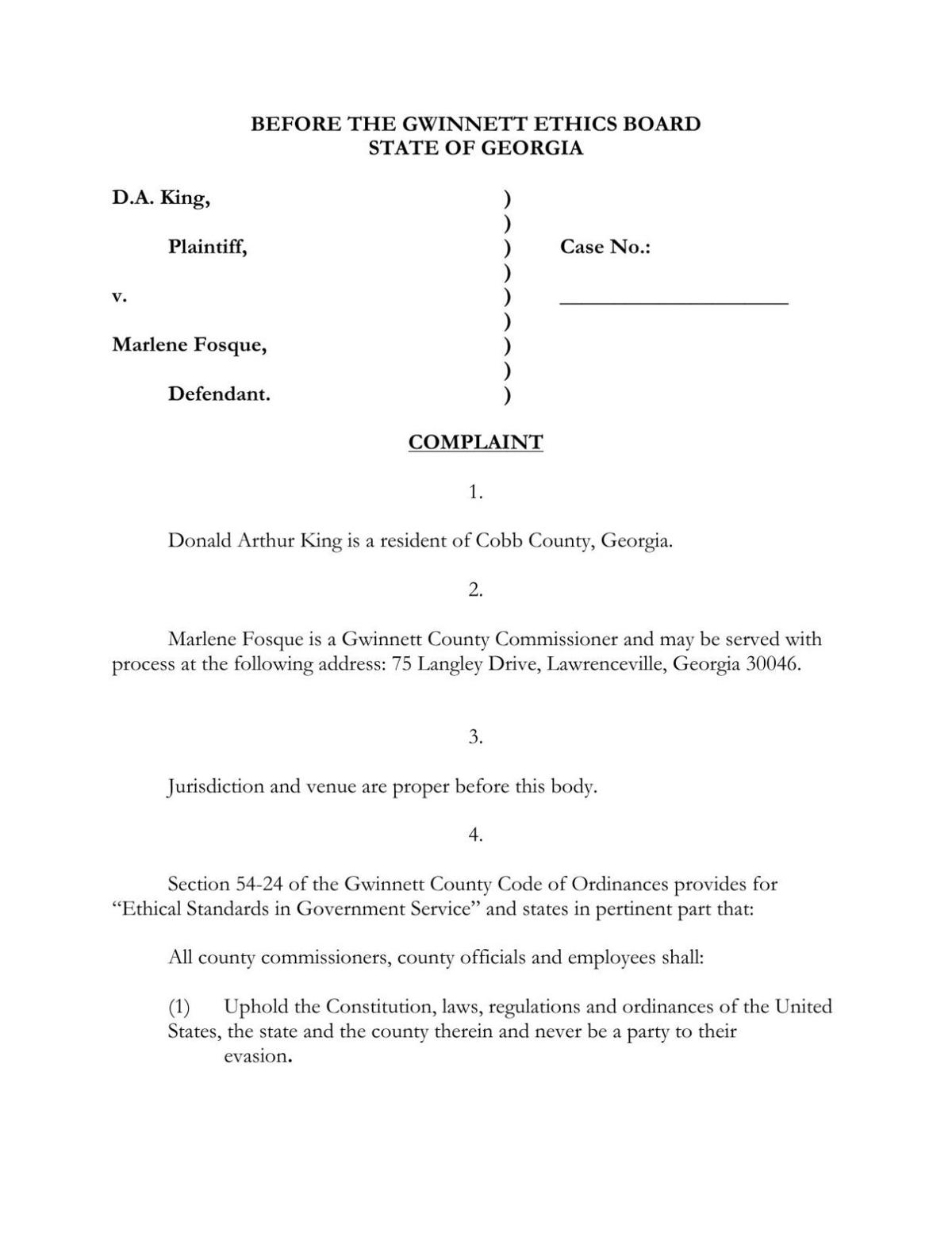 King’s complaint against Fosque is the latest in a series of back-and-forths between them, which began earlier this month after King was invited by the Gwinnett County Sheriff’s Office to speak about the benefits of the jail’s 287(g) immigration program at a July 31 community meeting hosted by Fosque.

While the meeting was intended as an information-sharing forum and an attempt to foster a dialogue between the program’s supporters and opponents, it veered off topic at times as demonstrators protested King and tensions ran high on both the pro- and anti-287(g) sides.

Fosque first addressed the meeting’s “negativity,” as she called it, at an Aug. 6 board of commissioners meeting, where she condemned the sheriff’s office for inviting King to serve as a panelist.

“I rebuke, denounce, deplore, and condemn the participation of Donald A. King, better known as D.A. King, of Cobb County, from being a panelist at my Gwinnett County community engagement discussion,” Fosque said. “This individual, as noted by an anti-defamation league director, has ties to the extreme elements of the anti-immigrant movement, spewing hatred and ... (intimidating) advocacy groups. This man from Cobb County, he should have never been invited by Sheriff Butch Conway to participate in our local Gwinnett discussion.”

In her speech, Fosque also “republished defamatory statements about (King) made by politically interested third parties including the Southern Poverty Law Center, including the statement that (King) leads an, ‘anti-immigrant hate group,’” the complaint said, while also saying the Dustin Inman Society “belittles immigrants.”

In his complaint, King said Fosque broke the law by making those comments.

“Defendant has violated the Georgia law regarding defamation ... by making charges against Plaintiff’s work with his non-profit organization the Dustin Inman Society and by uttering disparaging words causing special damages to Plaintiff,” the complaint said. “... the actions of the Defendant clearly demonstrate an occasion where she did not uphold the laws of the State of Georgia as required by the relevant portion of the Gwinnett Code of Ordinances.”

King’s complaint also alleges that Fosque “placed her own, anger, bias and loyalty to her political party above that to the highest moral principles and the county by defaming the Plaintiff with her inflammatory remarks,” thus violating the county’s code of ordinances.

“It is most unbecoming of the Defendant as a member of the Board of Commissioners to verbally assault the reputation of the Plaintiff, someone who merely responded to an invitation to participate in a public forum on a matter of public concern and who was not present or able to respond to false allegations,” King wrote in the complaint.

“Defendant did not contact the Plaintiff before, during, or after the event to engage him to have any personal knowledge of his positions on the attitudes she ascribed to him in her later August speech explicitly condemning Plaintiff without any basis. She merely regurgitated a false narrative spoon-fed to her by some unknown third party. This behavior is disgraceful and most unbecoming of a Gwinnett County Commissioner.”

The specific ethical standards King accused Fosque of violating include her duty to:

♦ “Uphold the Constitution, laws, regulations and ordinances of the United States, the state and the county therein and never be a party to their evasion.”

♦ “Put loyalty to the highest moral principles and to the county above loyalty to persons, party, or a county government department.”

♦ “Possess a commitment to integrity, transparency and full disclosure before undertaking any official action.”

♦ “Give to the performance of his duties, his earnest effort and best thought.”

♦ “Never engage in conduct which is unbecoming to a member or which constitutes a breach of public trust.”

♦ “Uphold these principles, ever conscious that public office is a public trust and is an honor, not a right.”

Fosque told the Daily Post that she would not comment on the complaint, but Gwinnett County Communications Director Joe Sorenson confirmed the county has received it.

He said county attorneys “are taking the initial steps to process it.”

Under the ethics process in Gwinnett, a new ethics panel must be put together each time a complaint is filed against a county commissioner or county employee. Before a panel is assembled, however, a hearing officer must review the complaint to see if it merits sending it to an ethics panel for a hearing.

If it does go to a hearing, commissioners would appoint one person to sit on the panel, as would District Attorney Danny Porter, the Gwinnett Bar Association, the local government chairman of the State Bar of Georgia and Fosque herself.

After a hearing is held, the panel would make a recommendation to the Board of Commissioners, which would make the final decision on whether to sanction Fosque.

The ethics ordinance does not grant the ethics panel or the Board of Commissioners the authority to fine Fosque. The most that could be done to her is the issuing of a reprimand.

This is the second time a Gwinnett County commissioner has faced an ethics complaint since the county’s ethics ordinance was put into place in 2011.

A written reprimand was issued against Commissioner Tommy Hunter on the recommendation of an ethics panel in 2017 after an Atlanta resident filed a complaint against him for calling U.S. Rep. John Lewis a “racist pig” and referred to Democrats as “demonrats” and “libtards” on his personal Facebook page.

Hunter has been challenging his reprimand in local, state and federal courts ever since. His attorneys have argued Gwinnett’s ethics review process is unconstitutional and a $5 million lawsuit he currently has pending in federal court argues that sanctioning him for his comments was an unconstitutional attack on his right to free speech.

That stance carried over somewhat to how Hunter’s attorney, Dwight Thomas, viewed the situation involving Fosque and King.

“I do not agree with the castigation of Mr. King by (Fosque) because he has a different political ideology than the commissioner, but castigating and punishing her free speech is not the way to bridge dialog, debate policy and keep the 1st amendment safe from (government) control,” Thomas said.

“Ultimately this is not about any commissioner but about protecting free speech that does not encourage violence but sparks controversial debate. The ethics appointment process by private citizens still must clear the Georgia Supreme Court ruling in Delay v Sutton, which was handed down after the Tommy Hunter ethics process.”

Following political attacks, Gwinnett Sheriff, others speak out in support of D.A. King

After a week of being attacked by several of Gwinnett’s elected officials, Dustin Inman Soci…

An attorney for Commissioner Marlene Fosque said Dustin Inman Society founder D.A. King has no grounds to seek a punishment of the commissioner for criticizing his involvement in a 287(g) forum in a new legal filing released Wednesday.

LETTERS: Commissioner Fosque should be held accountable in ethics inquiry

In regard to the article (“Commissioner responds to ethics complaint, Nov. 29, A1) stating that Dustin Inman Society founder D.A. King did not…