OK
You are the owner of this article.
Edit Article Add New Article
You have permission to edit this article.
Edit
Home
News
e-Edition
Find a Job
Sports
Entertainment
Opinion
Obituaries
Community
Multimedia
Marketplace
Help
1 of 2 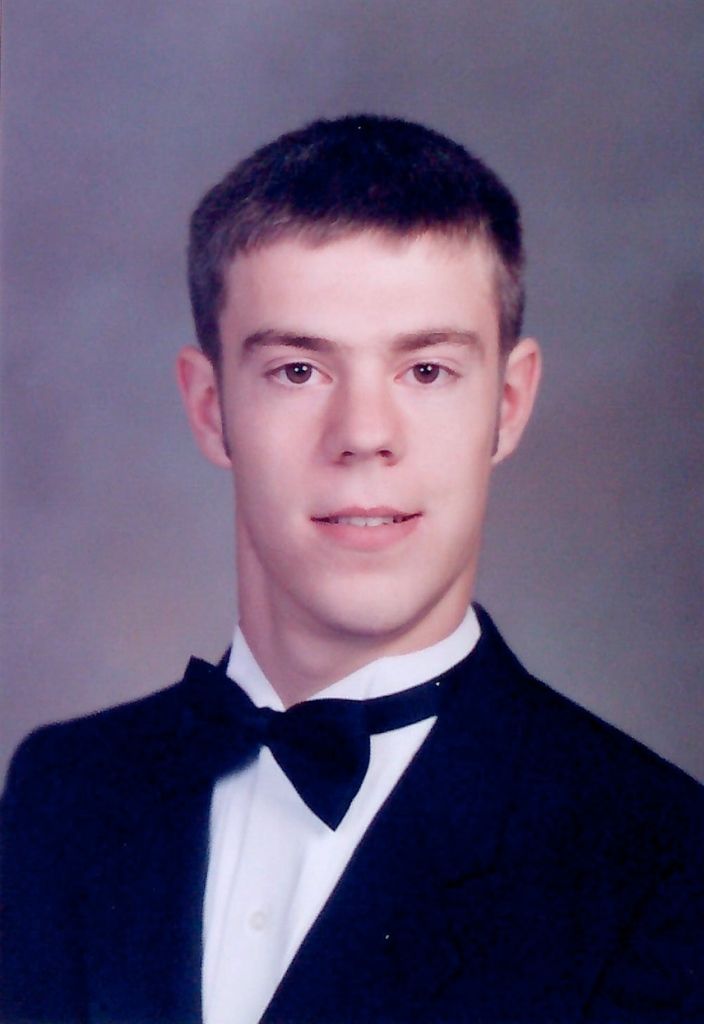 Ryan Wilson of Sugar Hill, shown in a high school photo, died of a drug overdose in 2008. (Special Photo) 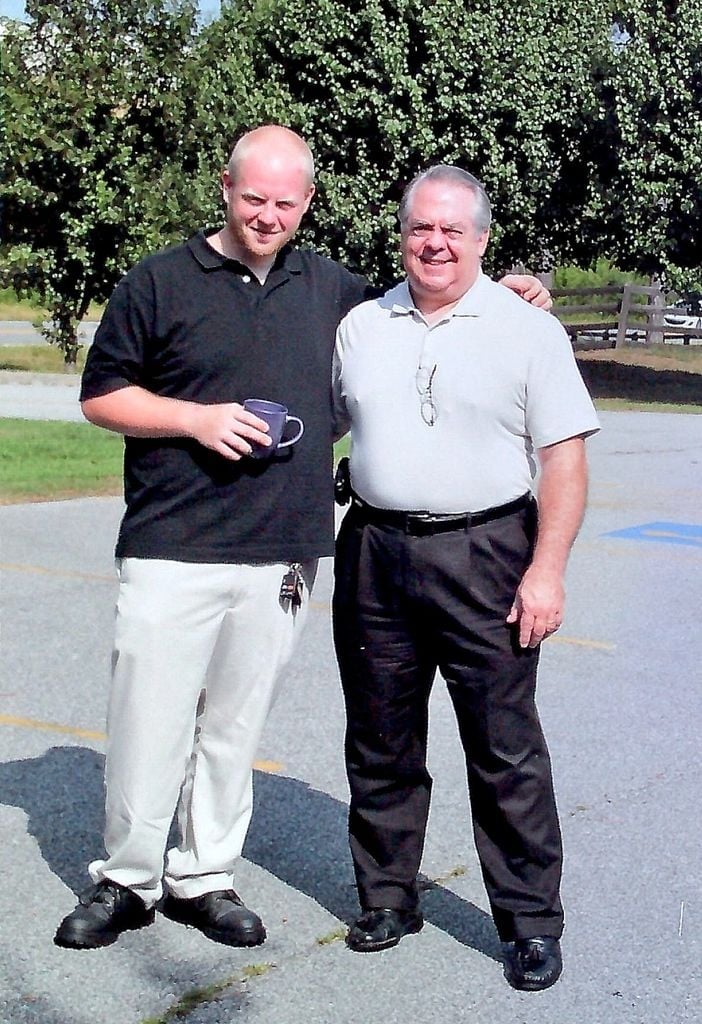 Longtime Sugar Hill residents Matthew Wilson, left, and father Paige Wilson embrace. Both men were devastated when Paige’s eldest son overdosed in 2008, and Matthew still had to fight his own battles with heroin. (Special Photo)

LAWRENCEVILLE — They stood in the parking lot of a cheap hotel, where the hum of tires on the highway out of town drones always and the bail-bonding company across the cracked pavement promises freedom “24/7, ONE CALL.”

It was the second day of 2015, as Paige Wilson hugged the neck of his last living son, 29-year-old Matthew. The son said he loved the father; the father said it back.

Momentarily, Matthew would drive off on his motorcycle to ask his probation officer’s permission to move to his dad’s house in Florida.

There, the son, a broad-shouldered redhead who long ago grew taller than Paige, planned to start anew. He’d just been released after many months in the work release program at the Gwinnett County jail, after many years in the grips of drug addiction.

Paige, who is a project manager for a defense contractor, planned to nudge the boy along in his second chance. He cherished Matthew now more than ever. His eldest son, Ryan, died of a drug overdose in September 2008 at age 26, crushing Paige and Matthew.

But in the drab parking lot, the father and son felt hope.

A longtime Sugar Hill resident, Matthew had plans for Florida: Get a job, go to school, get married, have a family.

Most important, he knew he had to stay clean.

Generally speaking, the Wilsons’ experience isn’t unusual. In fact, the number of Gwinnett families who deal with tragedies similar to Ryan’s death is rising.

In 2015, this county, the state’s second biggest, easily had more drug deaths reported than in any previous year, according to a senior investigator at the Gwinnett County Medical Examiner’s Office. As of the latest available data — from November — 152 deaths were confirmed drug-related, and the agency expected the number to only rise as test results come in on pending cases.

Compared to Georgia’s other most populous counties — Fulton, DeKalb and Cobb — Gwinnett was second only to more-bustling Fulton in fatal overdoses this year by November, a Daily Post review found.

Plain and simple: the numbers show Gwinnett County has a problem with drugs.

But two new-to-Gwinnett, ages-old killers have some authorities particularly concerned: heroin and Fentanyl, a powerful painkiller that can exceed the strength of morphine by as much as 100 times, heroin by 50. Heroin was confirmed to have killed 22 people in Gwinnett by November, fentanyl 19, according to the ME’s office.

Eight others died from a combination of fentanyl and heroin.

The mix, which the U.S. Drug Enforcement Agency said in March is a growing national issue, killed only once in a span of five years in Gwinnett before contributing to seven deaths in 2014. Dr. Carol A. Terry, the chief medical examiner, spotted the increase in September 2014, according to her senior investigator Eddie Reeves.

Reeves, a former Hall County deputy of 13 years with a shaved head and an easy drawl, is now helping to push back against the trends, along with Gwinnett police, the Georgia Bureau of Investigation and others.

He’s joined a committee with representatives from ME’s offices of Fulton, Cobb and DeKalb, as well the GBI, to track drug deaths in metro Atlanta through a mapping database. The idea, Reeves said, is to use the location of overdoses to suss out where drug activity is most prevalent and stamp it out before people die.

To see what’s at stake, look at what happened to the Wilsons.

The family arrived to Sugar Hill in 1997 for the father’s career.

Back in Leesburg, Va., Ryan and Matthew were active in sports and Boy Scouts. They had friends, fit in well enough.

Both sons managed to work, Ryan cleaning up houses and yards for a local contractor, Matthew cooking in restaurants. But their lives spiraled downward as the parents tried to figure out what was going wrong, why the two kept disappearing on unknown errands.

With Matthew especially, you can see him age in the 16 mugshots he took at the facility before his release this January. In the first, he was stout, 290 pounds, 6-feet-tall, with reddish blonde hair resting on his shoulders, and a goatee. Over time, he grew thinner, his hair short.

It was after one of Matthew’s many court hearings that he and his mother, who also died a few years later, came home to discover Ryan dead.

When the father found out, it opened a vast void in his soul, expanding always, deepening by the day.

Matthew got a tattoo for his brother, stretching 11 inches along his collarbone.

Matthew did not, however, stop using heroin.

“Simply put, heroin is fairly new to the Gwinnett area,” said Cpl. Deon Washington, a county police spokesman, who’s been with the agency a decade. “Therefore, we are just now seeing the impact.”

Fentanyl is a recent visitor, too.

It’s of particular danger because of the potency. Clandestine labs are putting out fentanyl and fentanyl analogues of varying strengths, but the power is always stunning, according to information from the DEA.

People are adding it to heroin to boost the high.

That can easily kill the user — especially if he or she doesn’t know the heroin is cut with fentanyl.

It’s hard, of course, to find what the user knew after the fact. But a Daily Post review all of the 40-plus available medical examiner’s reports on fentanyl-related deaths in Gwinnett since 2011 found that all but one was ruled an accidental overdose. (The one was undetermined. Other reports aren’t yet available.)

Many of the cases also involved heroin.

Asked how Gwinnett police were working to curb the issues, Washington said the agency was educating the public on the dangers.

Also, in February the agency conducted what another spokesman called the biggest heroin bust in county history, netting 16 arrests and millions-worth of seized drugs. The bust happened after three people overdosed and, apparently with the help of the medical examiner’s office, police found the supplier.

Eddie Reeves has a thick skin.

Even after years of hauling off bodies, he’s kept a good humor about him. A sign on his desk reads, “No Autographs Please.” There’s also a Yoda figure, one of many “Stars Wars” items littered in the office, mixed in with Atlanta Braves mementos.

“I can’t wait!,” he said about the new “Star Wars,” in an ecstatic voice that might better suit a 15-year-old Han Solo waiting in line for “The Force Awakens.”

Yet Reeves leaves his colorful office over and over to find sorrow. He’s seen people with hypodermic needles still plugged in their arms, dead on bathroom floors. Mothers grieving over the bodies of children they couldn’t save. People who sucked themselves out of life with fentanyl patches stuck to their tongues.

Always for the underdog, Reeves feels their sadness, he said. A father of three, he thinks of his own children when he has to load a young person into a body bag. With many of the victims he wonders, What were they trying to mask? What were they running from?

Some cases are naturally harder to shake than others.

At one house, there was a father dead on the bathroom floor. His young son couldn’t get in through locked door so he climbed through the laundry chute and found his dad’s body. Reeves found a spoon on counter and a hypodermic needle.

Reeves recalls another father and son, too.

At about 9 one morning, a cleaning woman was on her rounds at the Metro Extended Stay Hotel off Ga. Highway 316 in Lawrenceville, walking in and out of one sun-bleached blue door after another.

“Coming in,” she announced.

On the table near the twin beds, there were small plastic bags, the orange cap from a hypodermic needle, a cut-up aluminum can.

There was a belt, looped and fastened, around the back of one of the chairs.

On the floor, there was a dead man lying on his right side, wearing a pair of blue gym shorts.

His name, Reeves would soon learn, was Matthew Tyler Wilson.

Paige Wilson got the call later that day. It was Jan. 5, three days after he’d left his son to finalize plans for the Florida move and starting over.

Now, the father had no children left.

“It was bad enough with the first one,” he said. “You cannot believe what you’re hearing on the other end of that telephone.”

He couldn’t fathom what happened. Matthew had seemed hopeful, like he knew he had to be sober — like he wanted to be.

The medical examiner ruled the death an accidental heroin overdose.

Even more than before, Paige had to learn to live again. He had to excuse himself when a friend would show off a new baby. He had to cry. HE had to plan to be away from home at Christmas to fight the loneliness.

He and his current wife turned to faith for comfort.

In October, they traveled with a mission organization, Project 82, to Kenya. There, they helped with health checks and other services to for orphaned children and parents who were helpless to care for their kids, people who huddled at night with their whole family on dirty blankets on dirt floors.

Today, Paige knows he’s lucky compared to some. At least his family wasn’t in such poverty. At least he and his wife have the means to travel across the world to find a new reason to live.

He knows there are countless families who face pain similar to his and don’t have his blessings.

The day after working Matthew’s case, he had to respond to another overdose. The next day, another.

And the numbers just kept rising..

Heroin: 22 (as of November, the latest statistics available)

POLL: The iPhone 13 went on sale Friday. Are you planning to buy one?