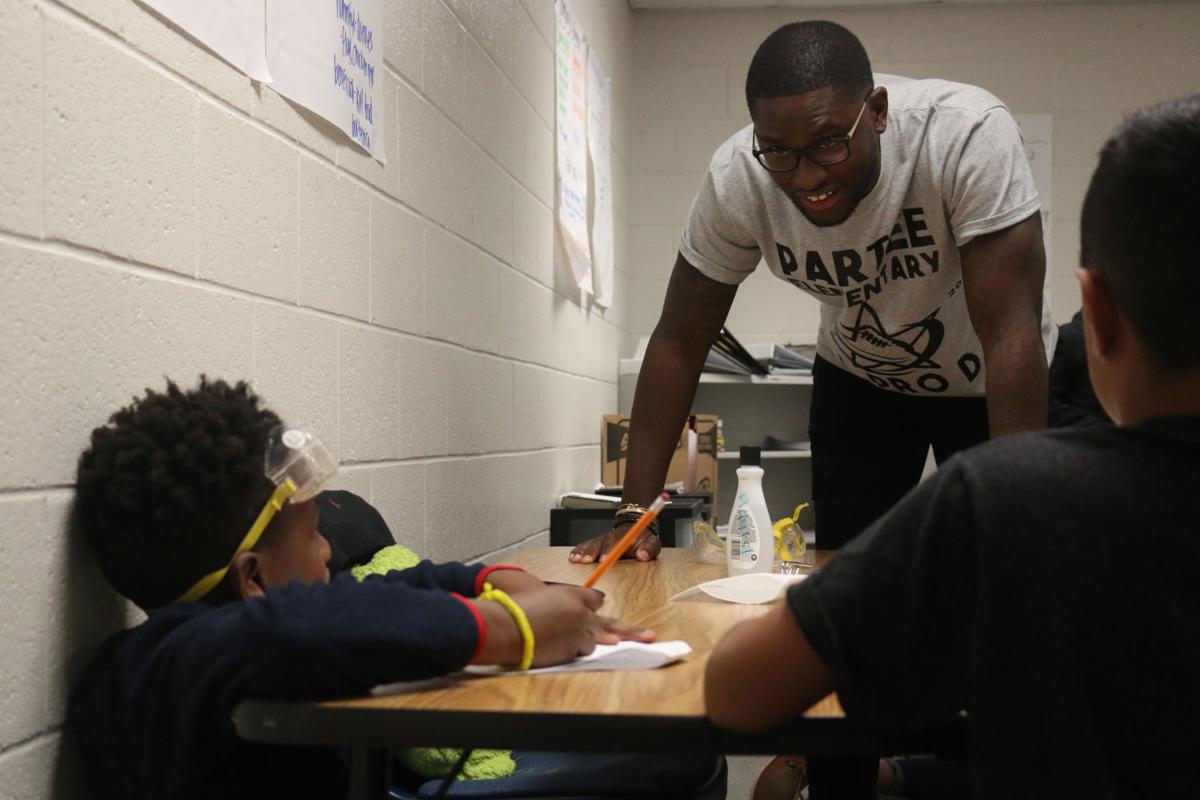 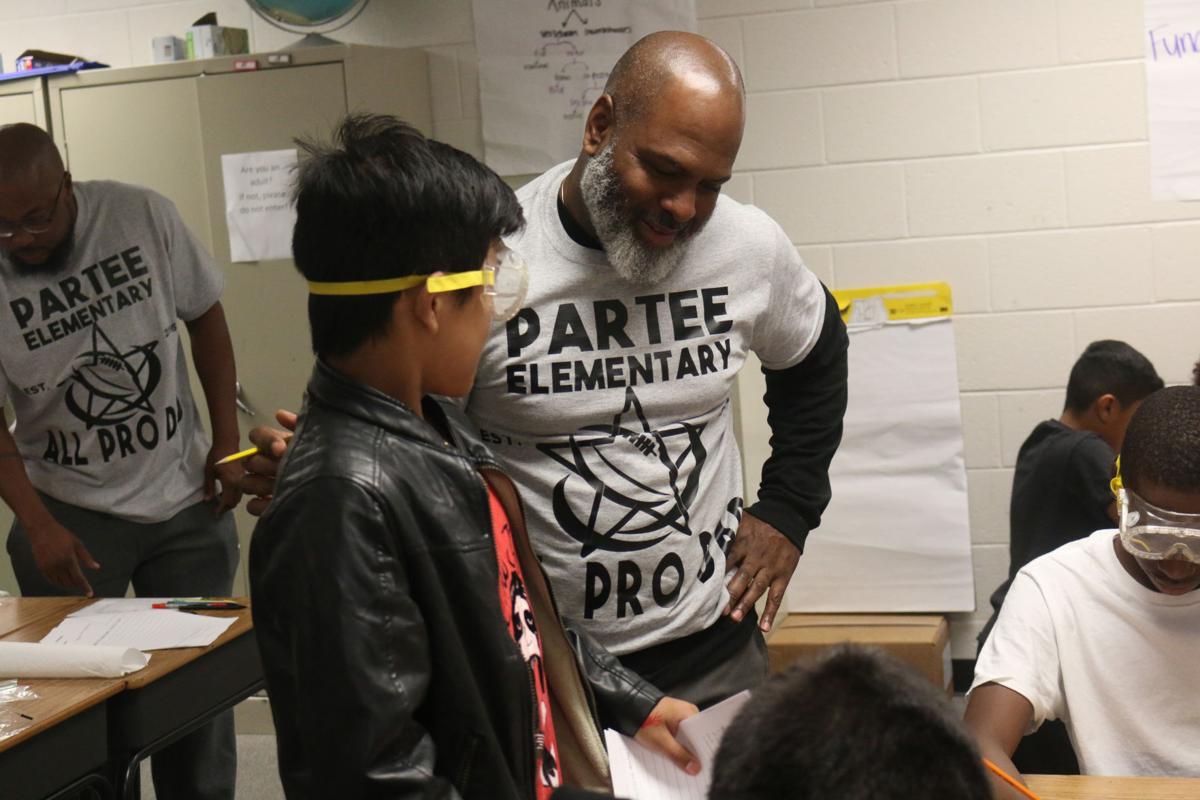 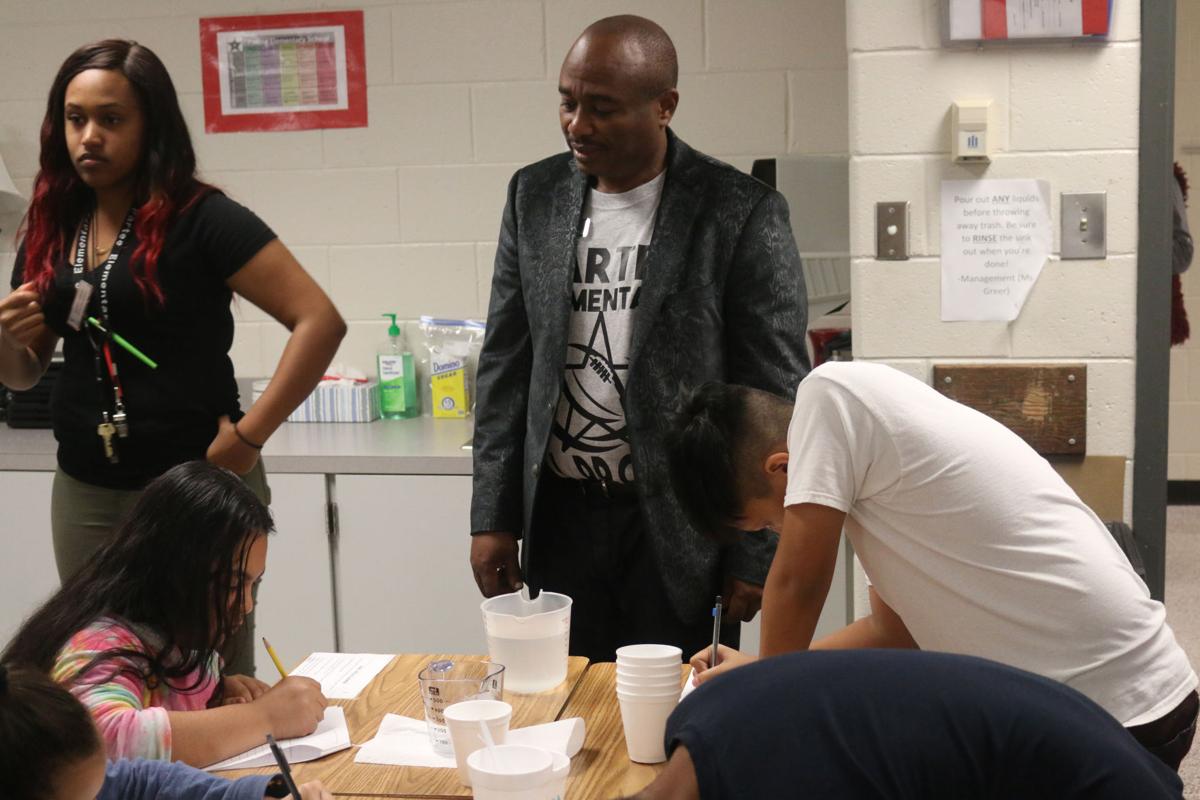 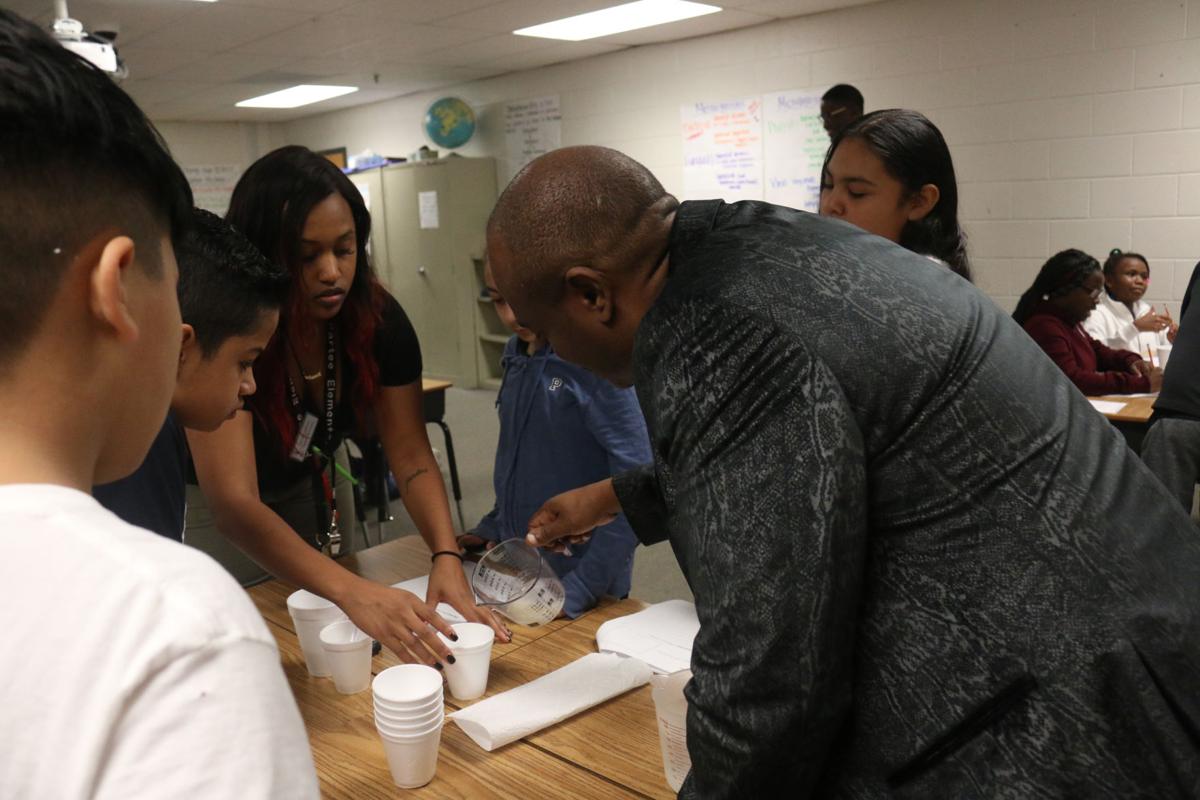 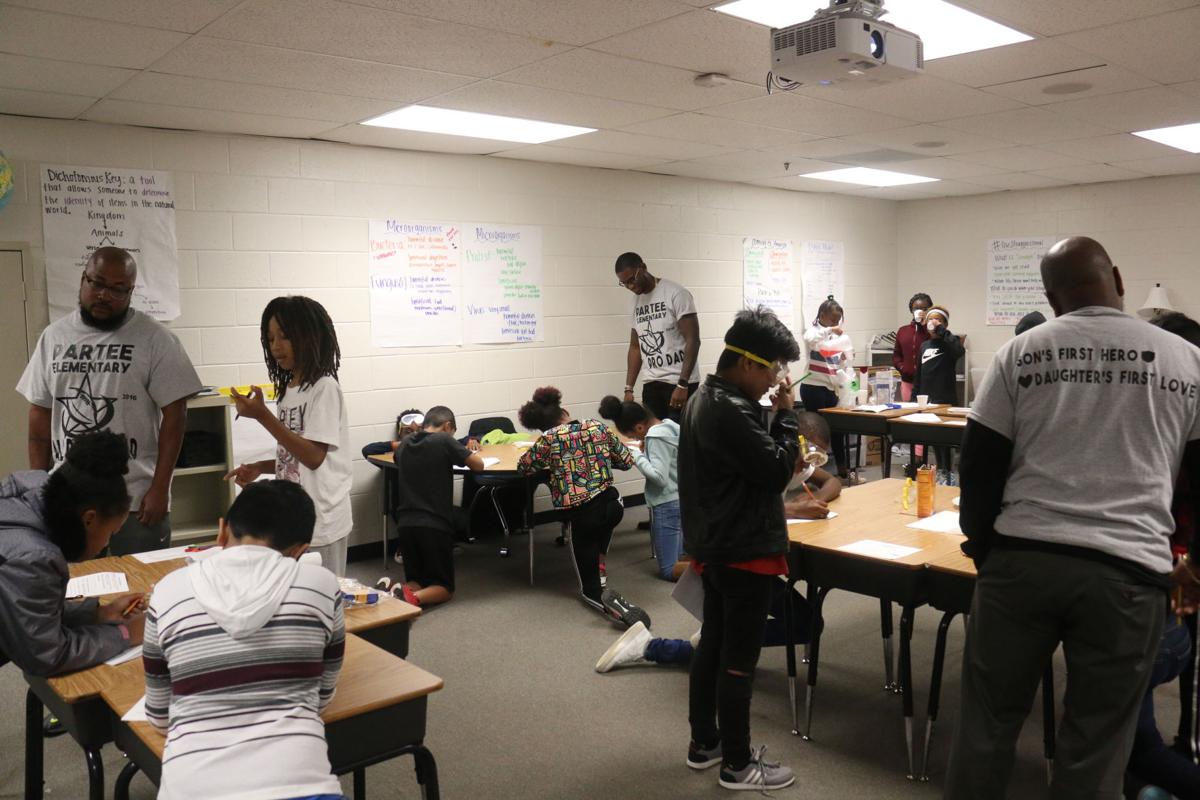 All Pro Dad volunteers work with Partee Elementary students on a science project on Friday. 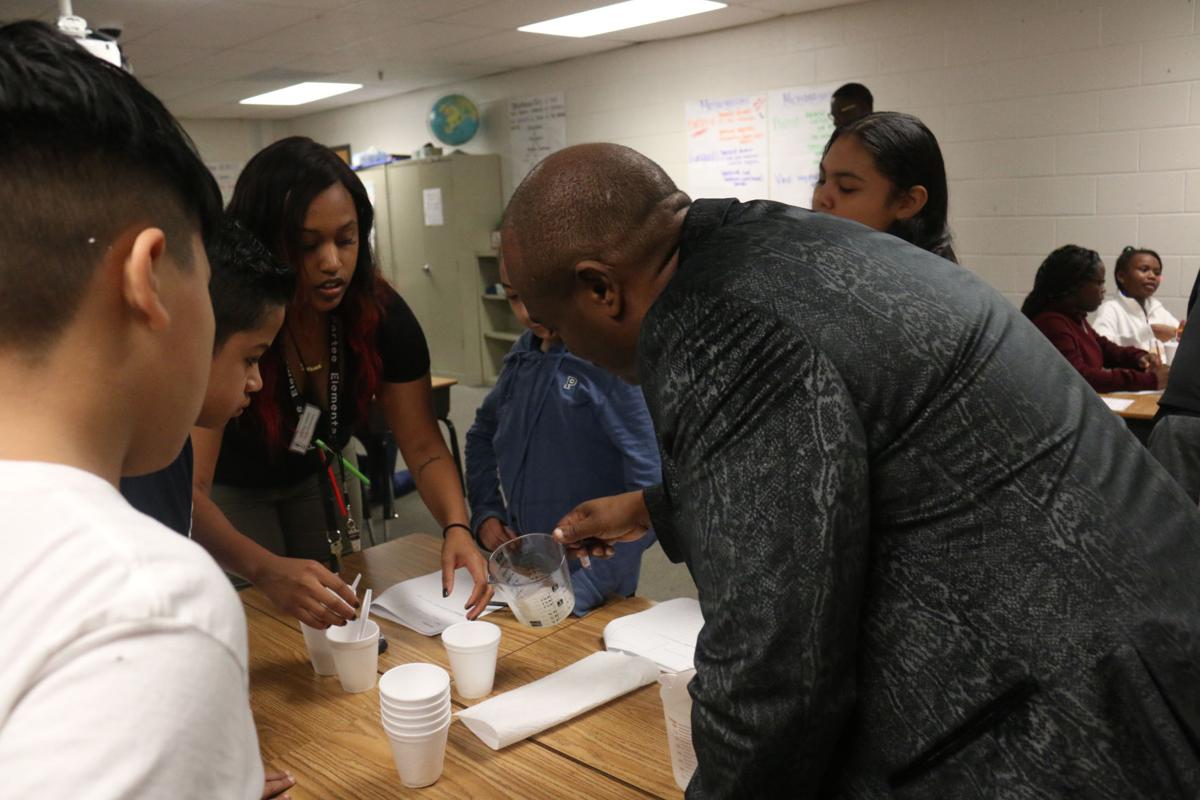 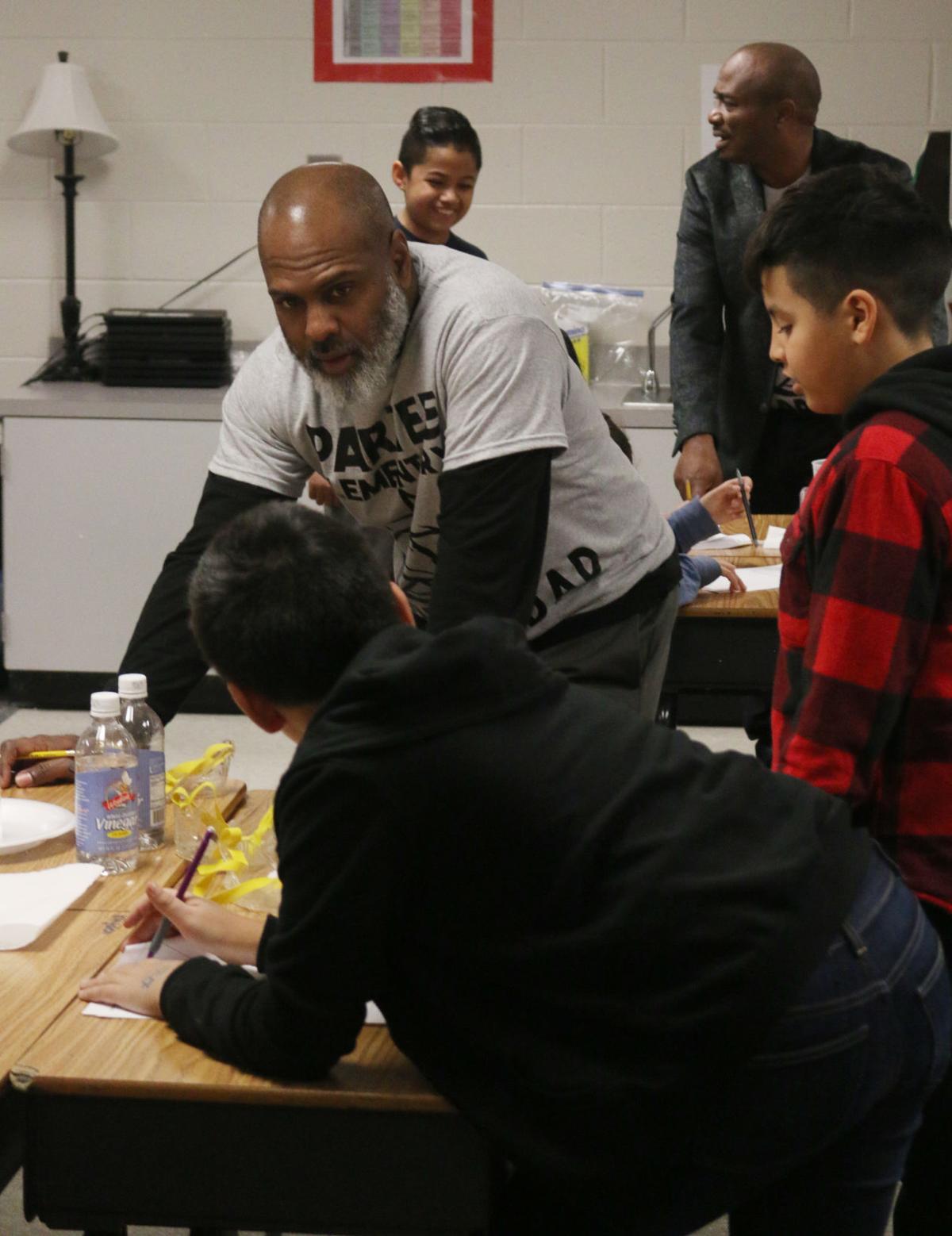 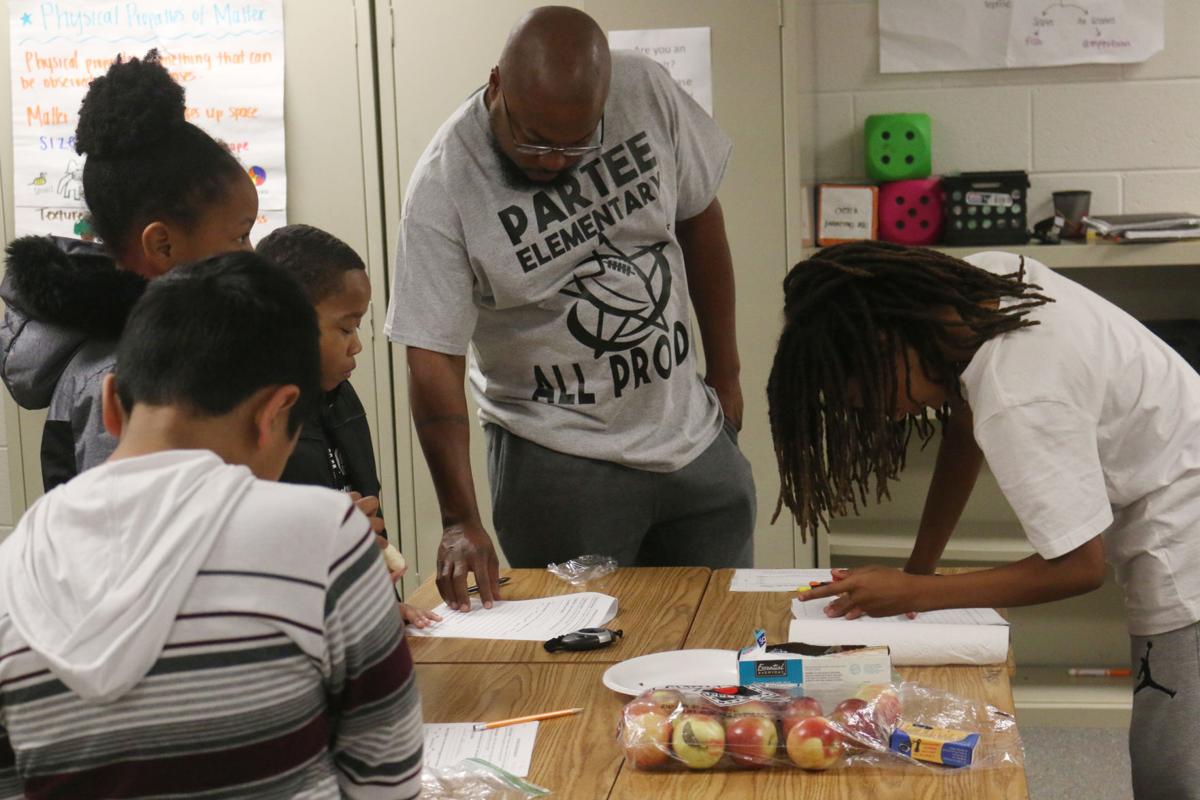 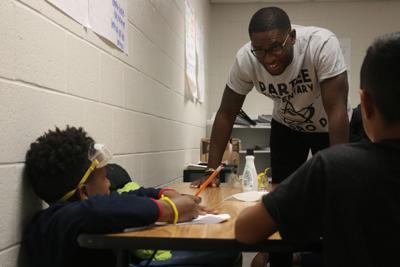 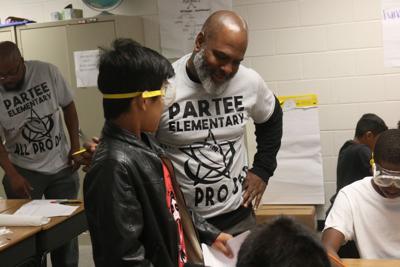 All Pro Dad volunteers work with Partee Elementary students on a science project on Friday.

Juan Harris remembers as a kid that it didn’t come down to only his immediate family to raise him, teach him right from wrong and sometimes discipline him. Neighbors, distant relatives and teachers were all role models and authority figures, not just parents.

“It takes a village, for real,” Harris said

Those memories guide Harris as a volunteer mentor at Partee Elementary School in Snellville and as the president of the Partee Chapter of All Pro Dads. Children spend most of their weekdays with teachers, so he wants to support their efforts and facilitate a classroom environment conducive to learning.

All Pro Dads is part of a larger nonprofit called Family First. All Pro Dads has chapters in 45 states in the U.S. There are 47 chapters in Gwinnett County, mostly at elementary schools.

Partee’s chapter is one of the most-active and fastest growing in the county, with around 80 volunteers who stop in for a day or two per week to help students to and from their cars in drop-off and pick-up lines, help class projects, organize community barbecues and lead mentoring groups. The organization at Partee started in 2015 with a core group of about 10 volunteers. Harris said the organization is trying to close in on 100 volunteers.

“When parents see us in here ... they go tell their husbands, they tell their grandads,” Harris said.

The organization is a good fit for work-from-home dads who want a presence in their kids’ school beyond traditional the parent-teacher association — Partee’s All Pro Dads is well-represented in the PTA. Partee parent outreach liaison Deborah Bridges said volunteer efforts impact all students at the school.

“It’s just not targeted to boys here, it’s the whole student body, our special ed department,” Bridges said. “It’s one of the things that helps them stand out more.”

All Pro Dads volunteer for extra-curricular events at the school like STEM night or movie night. They’ll act as hall monitors during testing or take over lunch duty to give teachers time to meet and plan during lunch. On Friday, about five volunteer dads led groups of students through a science project in Qeona Greer’s fifth-grade class.

“Whatever they ask for, we pretty much do,” Harris said.

Dad’s don’t exclusively volunteer in their own kids’ classrooms. Keenan Thomas has a daughter in kindergarten at Partee. His wife caught wind of the group early in the school year and Thomas decided to join.

“I think one key word is ‘support,’” Thomas said. “From A to Z, the versatility in what we do, we support all faculty or parents. We are able to provide support on every front. Just our presence here too, it provides and uplift.”

Partee would be considered a small elementary school in Gwinnett County with an enrollment of about 688 students. Small enrollment means a smaller staff that sometimes leaves Partee administrators feeling spread thin.

Kelli McCain, in her third year as principal at Partee Elementary, said she’s seen significant growth in the visibility in the school. Something as simple as directing cars and students for pickup and drop-off provides a relief for teachers and administrators.

“That frees us up to meet with kids, meet with parents,” McCain said. “It free us up in other areas to make sure that we’re touching base with teachers or students or we need a sub in a certain place.”

In addition to a volunteer presence, All Pro Dads can be role models for students. Harris said parents will sometimes tip him off to struggling students. Lamonte Leath, one of the core volunteers from four years ago with a third-grader at Partee, leads a mentoring group for 12 third through fifth grade boys at the school with academic or discipline issues.

“I speak to them about their present situation, but also encourage them for the future too,” Leath said. “Motivate them as they go through the process, the struggle, family dynamics changing.”

Students sometimes feel more comfortable confiding in All Pro Dad volunteers than teachers or parents. Marcus Bradely, who’s had one child graduate from Partee and another in fourth grade, said he’s noticed children start to latch onto volunteers. He feels children are sometimes searching for role models, and a small act of kindness toward a student can get them through emotional ups and downs of the day, week or school year.

“Everybody (doesn’t) have a dad,” Bradley said. “We’ve all been great dads at home and we bring that same energy to the school.”

McCain said the care and attention they show for all students, not just their own, is galvanizing for the Partee community.

“If a child has someone to connect with when they come into a school, that makes a difference,” McCain said.

Chapters of All Pro Dads mostly partner with elementary schools, though some are partnered with middle schools. Founding a chapter requires partner approval and a $50 annual chapter fee, and registration is online at allprodadchapters.com.

Atlanta Braves 2020 Chop Fest: What To Know About Saturday's Event