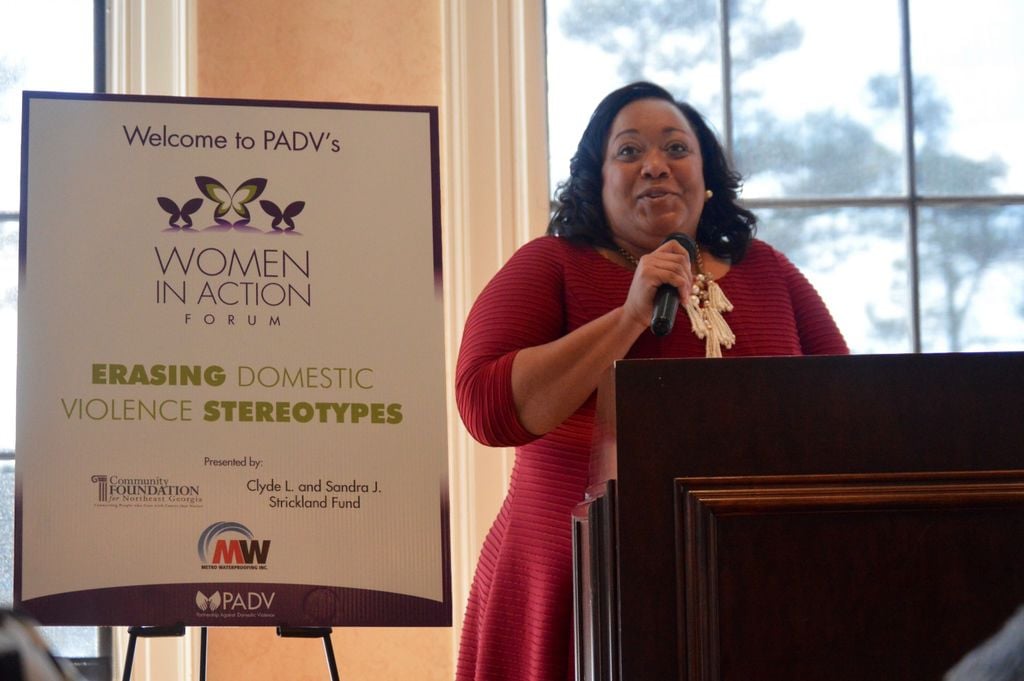 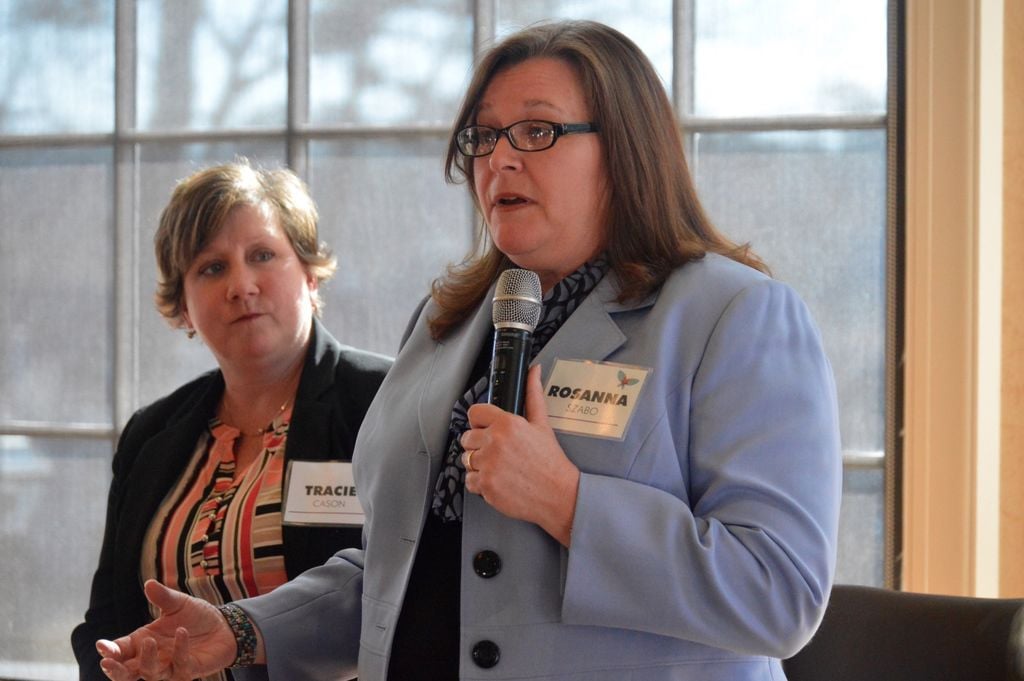 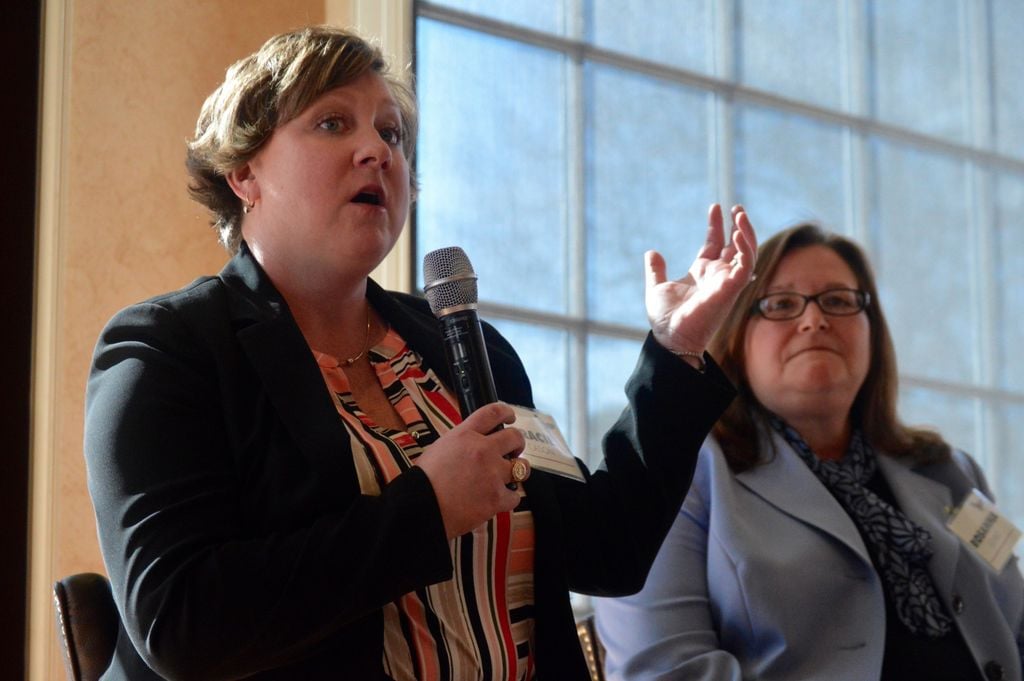 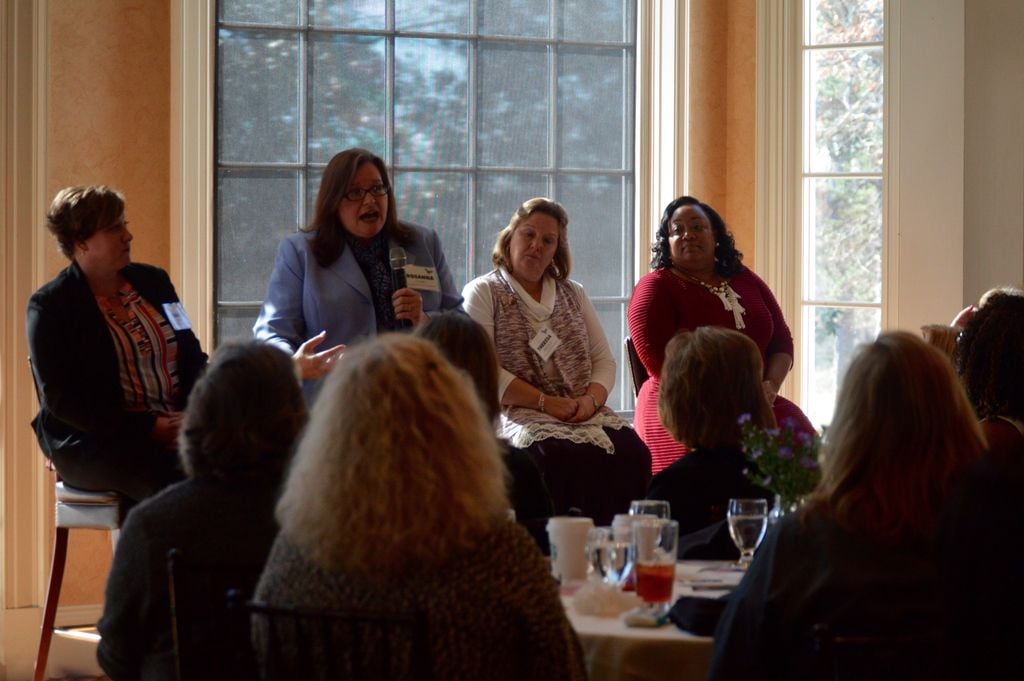 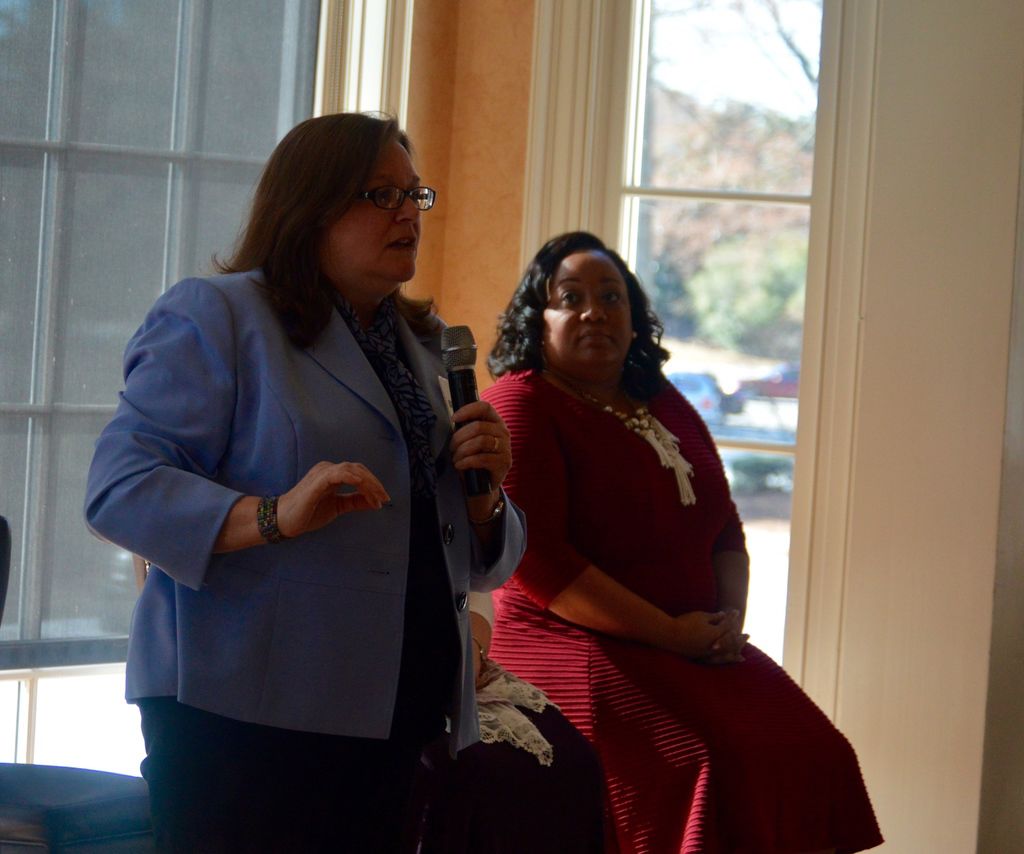 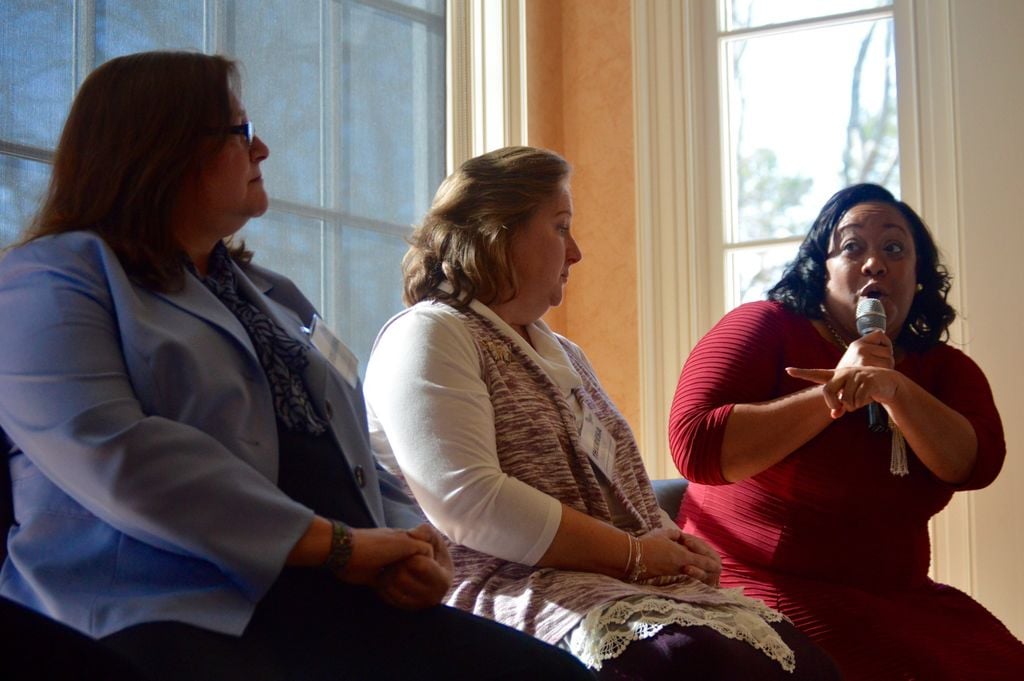 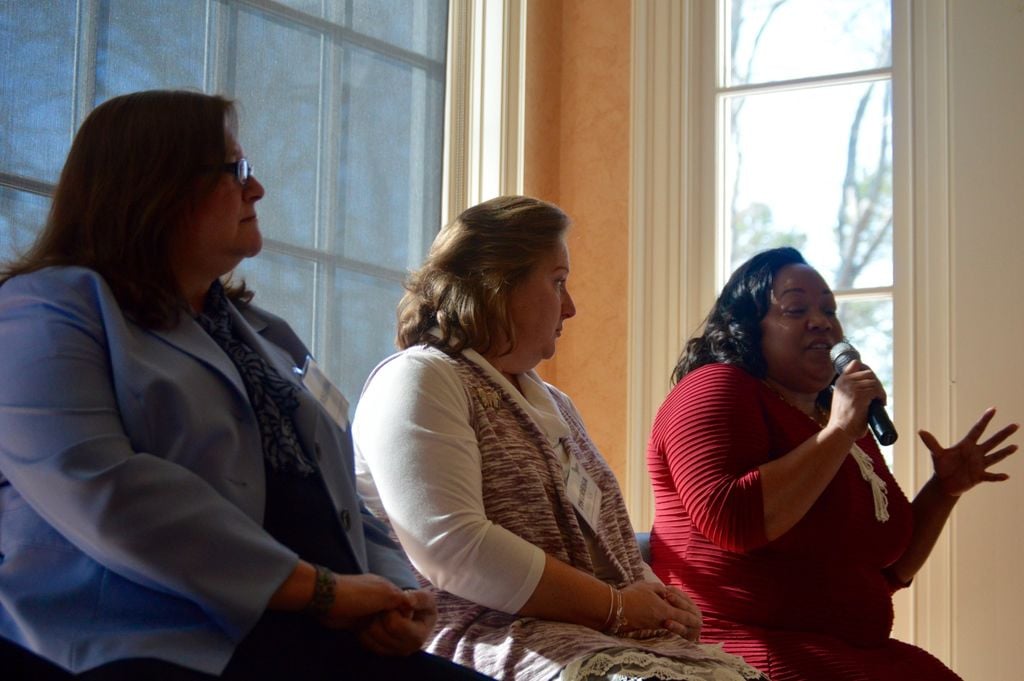 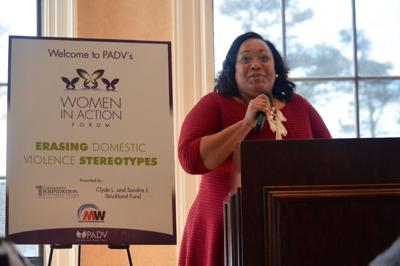 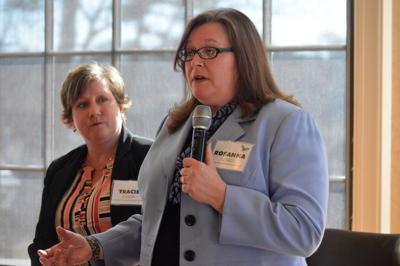 Even when her husband beat her so badly he burst both her eardrums, Charmagne Helton didn’t consider herself a victim of domestic violence.

She just didn’t fit the stereotype.

“I grew up in a stable, middle-class, two-parent home with my two younger brothers, a Barbie doll collection and my German shepherd named Candy,” she said. “In high school, I was student body president, queen of school spirit and on the newspaper staff.”

She continued to shine through college, attending on a scholarship that covered her tuition, room and board. She graduated with a 3.8 GPA.

Helton did eventually come to recognize herself as a victim — and eventually a survivor — of domestic violence. And she told her story Friday morning as the keynote speaker at an event aimed at dispelling the stereotypes that hinder the public’s understanding of domestic abuse.

Partnership Against Domestic Violence hosted the event Helton spoke at over breakfast at the Sugarloaf Country Club. It was fitting, since PADV was also the organization Helton and her two young children turned to after her husband was finally arrested on July 4 several years ago.

“It was my independence day,” Helton said.

Since 1977, PADV has been working to end domestic violence and empower survivor of the crimes, according to its brochure. It’s considered the largest domestic violence agency in Georgia. Last year, PADV helped 10,613 callers to its crisis lines and provided 5,174 survivors with legal support.

The organization also counseled 277 women in support groups and housed 628 people in their supportive and safe houses.

Helton ended up in one of those safe homes when her husband was arrested all those years ago. But she didn’t think she belonged there — not at first.

She hadn’t thought to seek it out a shelter herself. Instead, the Monday after her husband was arrested, she went to work as normal. She was afraid he’d bail out of jail and come home angrier and more violent than ever, but she didn’t know where else to go.

So she went into the office and called the employee assistance program there. When a counselor told her she should head toward a battered woman shelter, Helton said she felt “there must be some mistake.”

“We all know the stereotype,” she said. “Domestic violence victims are other women. Not college educated women. Not suburban women. Not women from stable families with loving parents. Not women who work full time and have no history of violence. Not good, everyday, ordinary women like me.”

It wasn’t until she spent some time in a PADV shelter that she realized the wide variety of women beaten, stabbed, choked and generally abused by their significant others.

“There were women in there just like me,” Helton said. “Women with children, single women, married women, black women, white women and brown women. There were women pulling up in their BMWs and women arriving on the bus.”

In other words, she learned domestic violence can — and does — affect anyone.

Today, Helton serves on the PADV board of directors. She uses her position to spread that knowledge to other women in order to break the stereotypes about domestic abuse.

She and other PADV members have a big job ahead of them. The misconception Helton held about domestic violence victims before she settled into the PADV shelter isn’t an uncommon one.

The panel members saw the stereotypes about domestic abuse all around them — especially among women who don’t see domestic abuse as a threat to their lives. Both Cason and Szabo said they would rather fill a jury in a domestic violence case with men rather than with educated women.

The educated women, they said, can’t get over their stereotypes of battered women.

“You will find a lot more men on a jury that will actually vote to convict (a batterer) than you will professional women,” Cason said. “Because they’re like, ‘I’m a strong woman. I would never let that happen.’ We have got to change that perception.”

That perception can be a problem. Helton said one in four American women will deal with domestic violence at some point in her life.

“Now, compare that to breast cancer, which affects one out of every eight women,” she said. “Because we talk about breast cancer, there are now 3-day walks and pink ribbon campaigns and all sorts of awareness and prevention efforts.”

But, unlike breast cancer, most women don’t feel domestic violence can touch them. So they don’t talk about it — or take steps to do eradicate it.

Today, Helton is a success story. She has two children who are excelling in their studies and extracurricular activities. She works as a director of a consulting firm. She’s once again shining.

“Domestic violence does happen to women like me,” she said.

This is not a scientific poll — results reflect only the opinions of those voting. #NationalPecanMonth