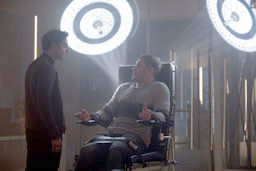 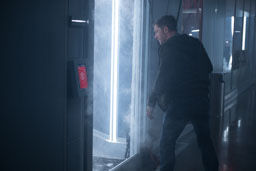 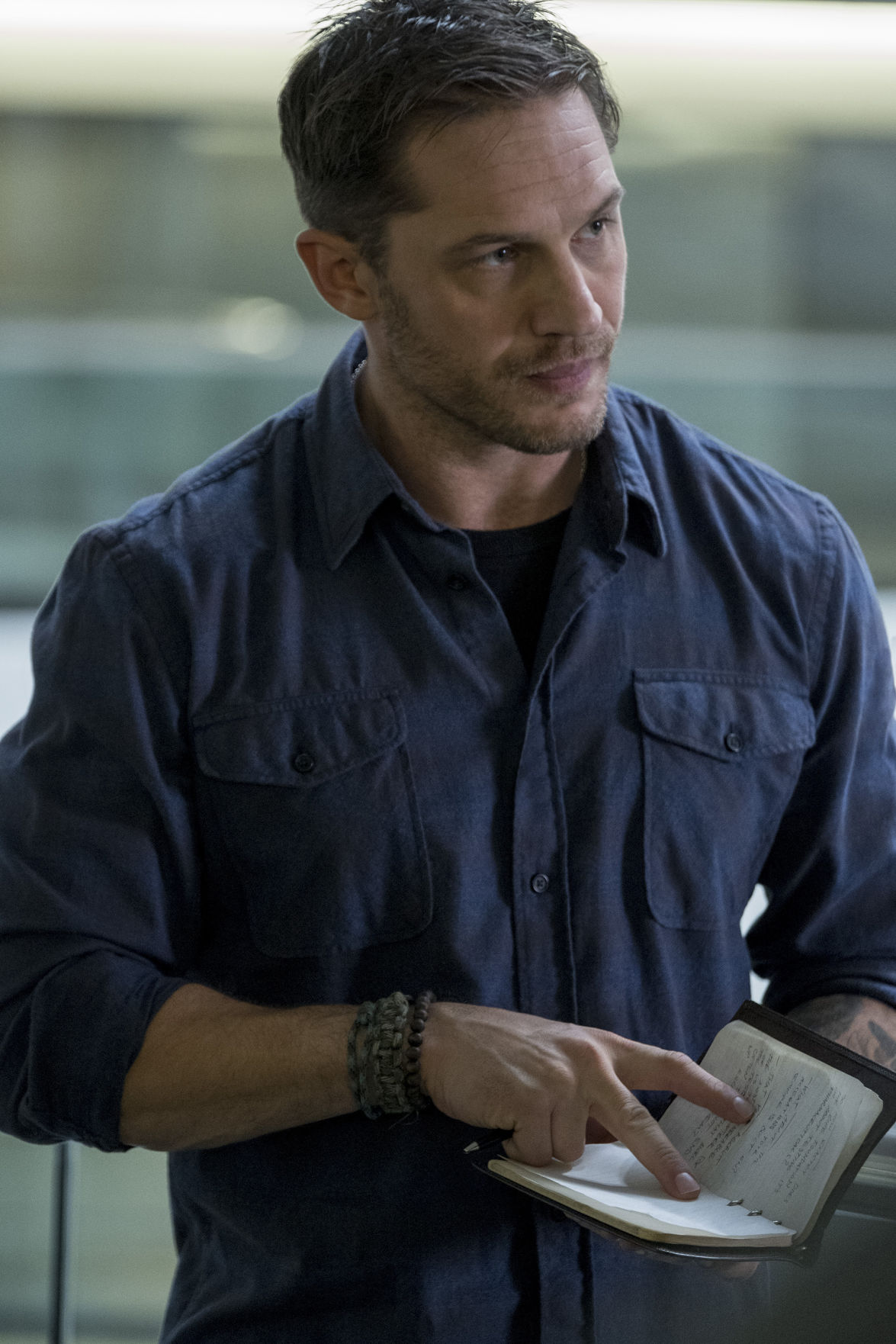 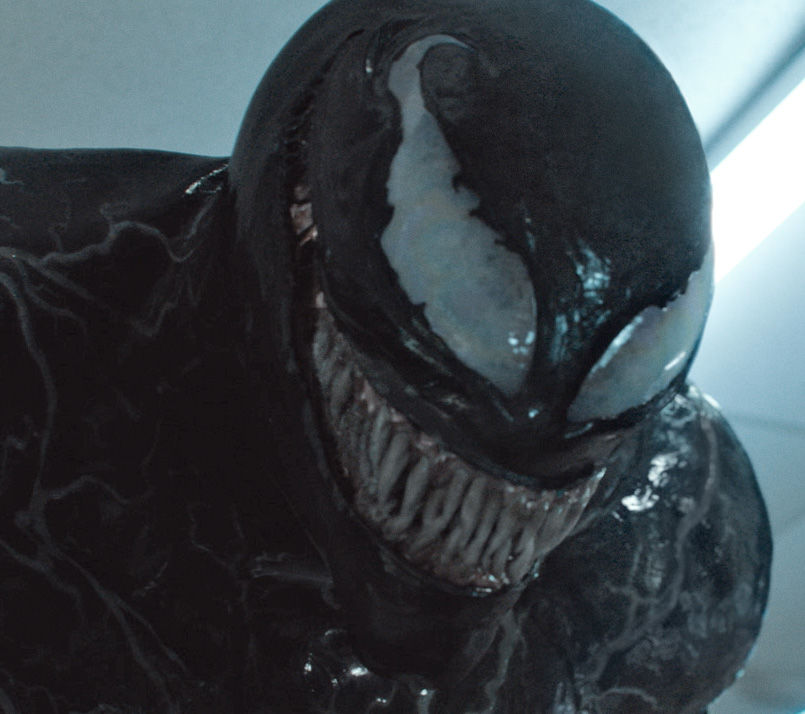 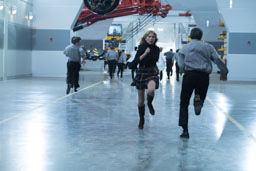 There are two kinds of spider webs in nature. One is an orderly thing of strange beauty, best exemplified by the circular latticework of the large orb weaver spiders. The other kind is a tangled mess that just kinda hangs in a corner somewhere.

Although based on a classic antagonist of Spider-Man, the flagship hero of Marvel Comics, this movie has no connection to Spider-Man franchises past, present or, likely, future (but that could change). But it is still a Spider-Man movie. Only without Spider-Man.

After opening with an aerospace accident that brings an extra passenger to Earth, “Venom” focuses on Eddie Brock (Tom Hardy in a New York/Jersey accent), a TV investigative reporter who specializes in exposing corruption when he’s not hanging with his too-good-for-him fiancee (Michelle Williams). In the course of his livelihood, he makes a powerful enemy one too many times and is sent on something of a downward spiral. Meanwhile, Elon Musk-like CEO scientist Carlton Drake (Riz Ahmed) is too impatient for the progress of his potentially world-saving project.

I, too, found myself a bit impatient during the first act. I was never bored but was wanting director Ruben Fletcher (“Zombieland”) and his screenwriters to get on with it. “Venom” spends a lot of time trying to humanize the slightly unlikable Eddie, in similar fashion to how every Spider-Man movie made before 2017 attempted to make viewers feel for its villains. But where those films did it well (as in the 2002 and 2004 efforts) or overdid it (see franchise-wreckers “Spider-Man 3” or “Amazing Spider-Man 2” in 2007 and 2014, respectively), here, it seems like needless wheel-spinning. Especially because he’s supposedly the hero, anyway.

Once the filmmakers exit Act 1, the tone shifts from dull horror-lite to downright silly as Hardy plays both his human Eddie half and his CGI Venom persona — well, his voice, at least. The trouble is that, as in Hardy’s portrayal of villain Bane in earlier comic book film “The Dark Knight Rises,” the voice work ends up being somewhat unintentionally hilarious and you begin to laugh at the film instead of with it. Here Hardy and the filmmakers are clearly going for the humor. But it’s such a sharp turn from the film’s earlier tone that one wonders which was the original intent: the horror or the humor?

To make matters worse, the project frequently flips its priorities, putting actors and story in service to visual effects instead of the other way around. For example, there’s a scene where a hapless character is attacked by a goop-like alien being which slithers up his legs and to his chest. But instead of using his completely free hands to try to fight or free himself, he merely stands there as though at gunpoint. The reason? To make it easier for VFX animators to render the goop.

Another moment when the movie almost entirely loses me is with Venom’s battle against a band of heavily armed … SWAT guys? Private security? More of the bad guy’s goons? It’s unclear. What is clear is that the battle is completely needless from a story standpoint (“Why doesn’t he just LEAVE?” I asked myself throughout) but it happens anyway despite the hero’s disinterest in said pitched battle. Where an earlier — and far more effective — confrontation makes great story sense, this one simply seems to exist because, well, we are supposed to get a big GCI-effects battle here at the movie’s midpoint.

After taking their not-so-sweet time getting to the action, director Ruben Fletcher (“Zombieland”) and his screenwriters rush from scene to scene in implausible fashion (How does Williams’ character seem to always know where to be? Why do we never learn how the big bad finds his targets? Why does Hardy always end up in roles where he’s doing some sorta weird voice? I HAVE QUESTIONS). It keeps things from getting too slow-paced — “Venom” is under 2 hours long, a rarity in the genre — but it makes the final act confrontation even more vacuous than usual.

I love the superhero genre, and Sony’s “Venom” is a game attempt with great actors. But it doesn’t stick the landing because Venom’s not really a superhero character and unlike Fox’s “Deadpool,” here he doesn’t have a hero to act as foil against him. It was always a bit of a gamble for Sony, done chiefly because the studio wants to keep making Spider-money while Marvel Studios enjoys reclaiming its flagship character for last year’s “Homecoming” film and this and next year’s “Avengers” flicks and a sequel. But one somewhat wishes the filmmakers had picked one: gone full R-rated horror or made the whole movie’s tone more consistent.

Speaking of sequels, the first of two end-credit scenes certainly has a followup written all over it. But it’s the second, a full-blown teaser for Sony’s animated “Into the Spider-Verse” spinoff due in December, that truly impresses, delivering better humor, action and heart in two minutes than in Venom’s whole nearly two hours.

Coronavirus pandemic: Updates from around the world