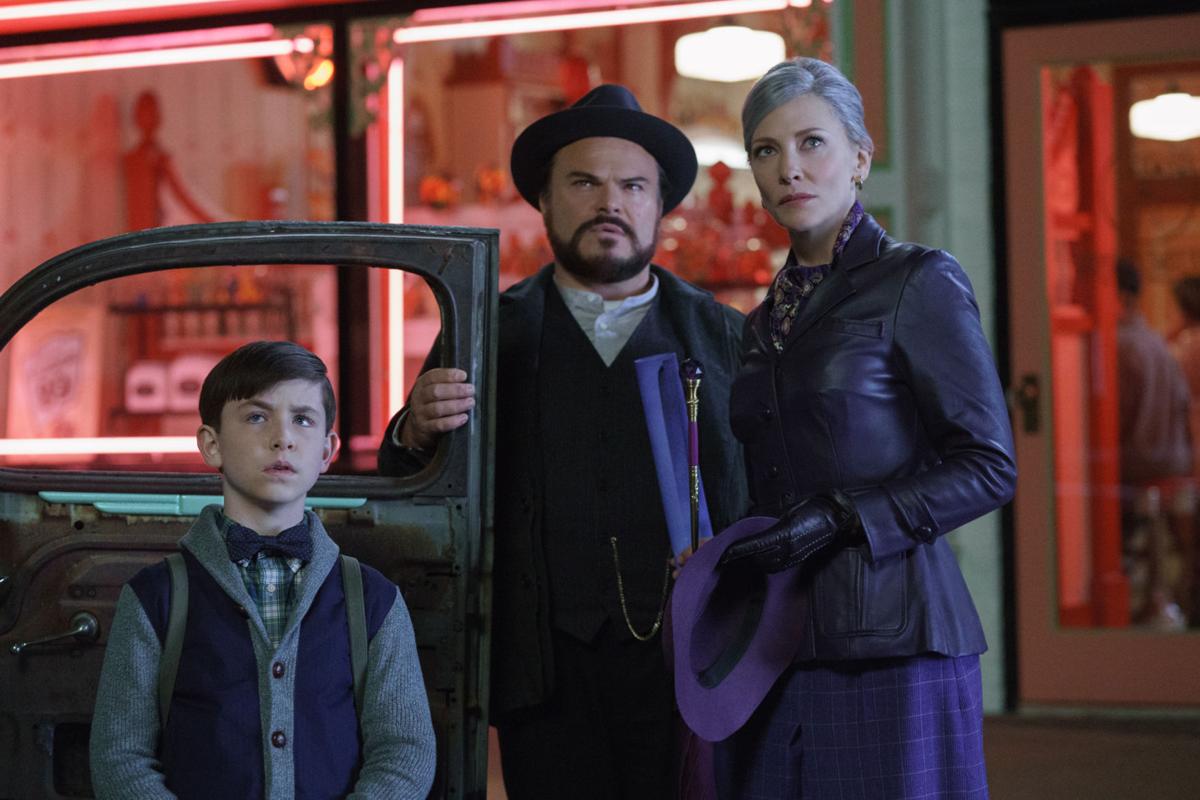 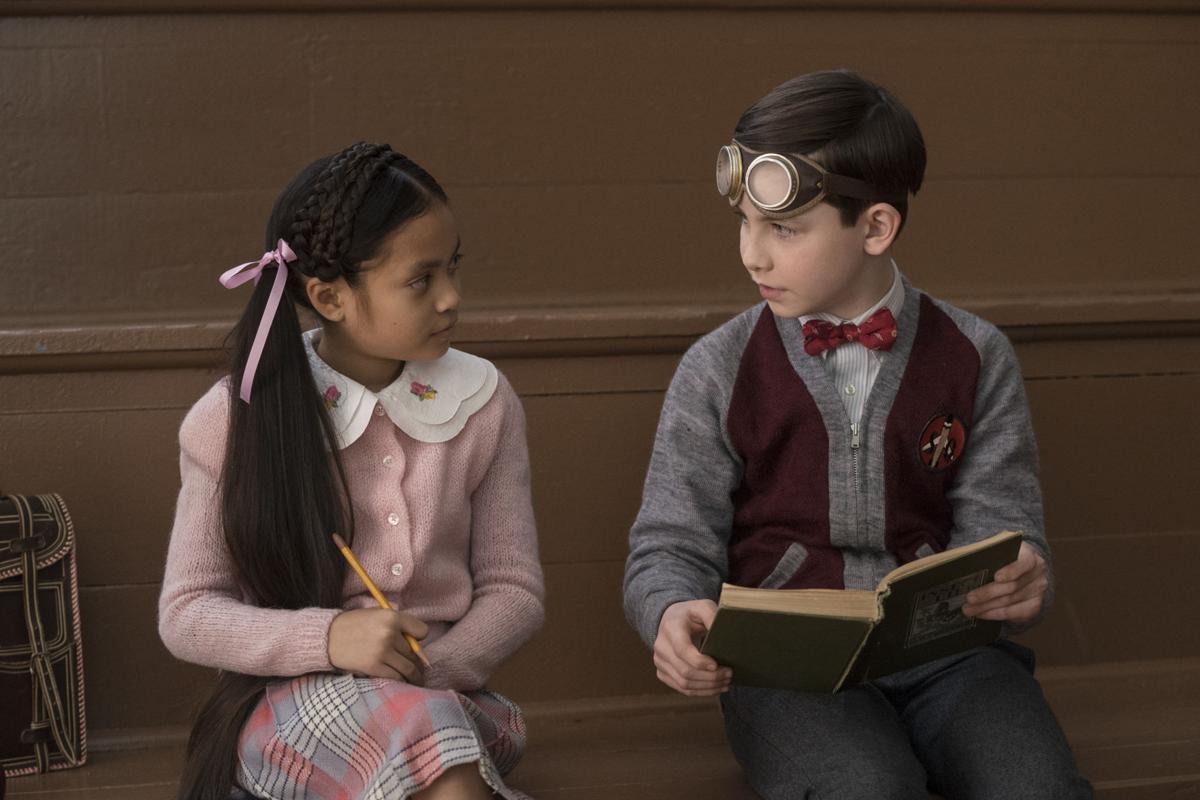 Owen Vaccaro (Lewis Barnavelt) and Jack Black (Uncle Jonathan) in “The House With A Clock in Its Walls.” (Universal Studios) 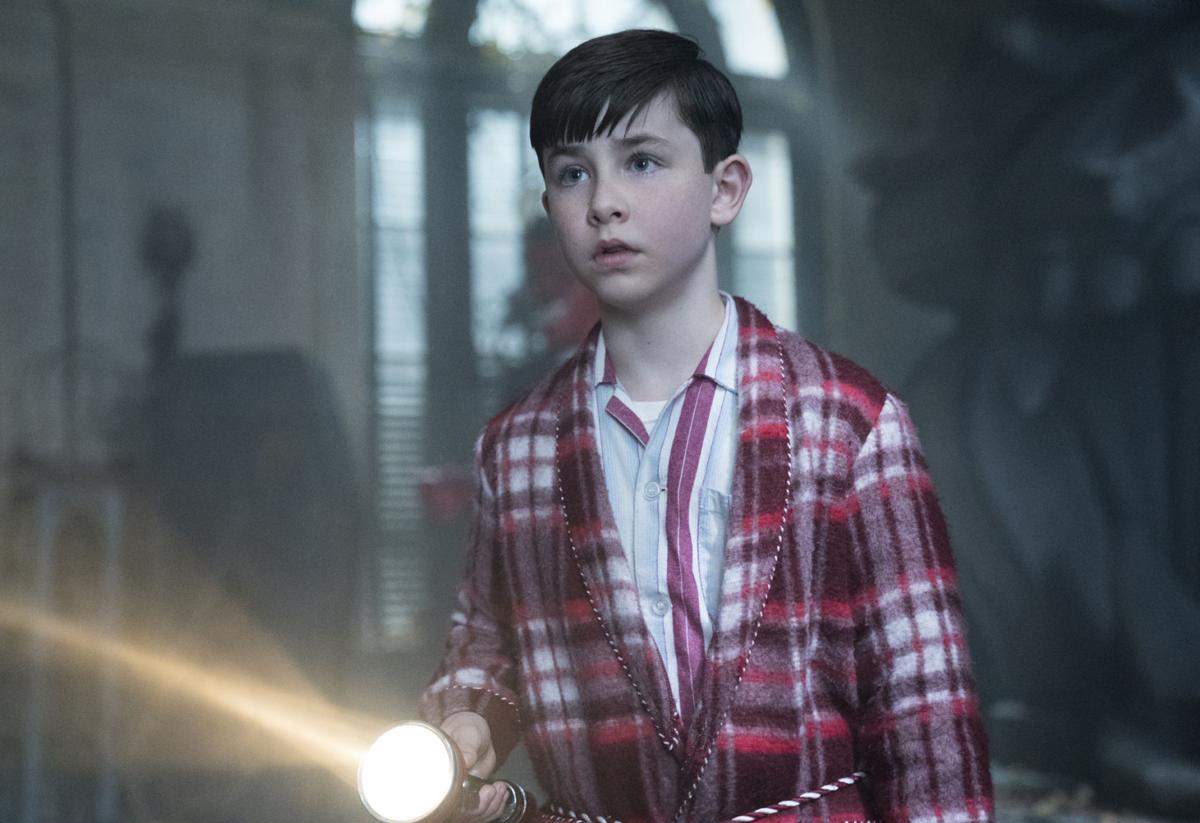 Jack Black (Uncle Jonathan) and Owen Vaccaro (Lewis Barnavelt) in “The House With A Clock in Its Walls.” (Universal Studios) 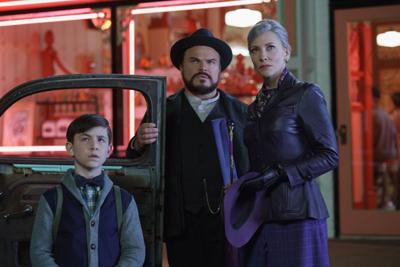 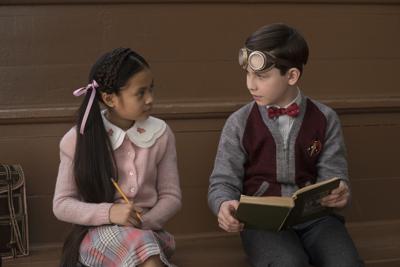 Owen Vaccaro (Lewis Barnavelt) and Jack Black (Uncle Jonathan) in “The House With A Clock in Its Walls.” (Universal Studios)

Jack Black (Uncle Jonathan) and Owen Vaccaro (Lewis Barnavelt) in “The House With A Clock in Its Walls.” (Universal Studios)

The House with a Clock in its Walls

Although intending to be a hybrid of “Goosebumps” and the “Harry Potter” franchise targeted to the under-10 demographic, the beyond-clunky titled “The House with a Clock in its Walls” (THWACIIW) instead becomes a self-parody before the opening credits are even over. Set in 1950s Michigan (yet shot mostly in Newnan, Ga., with still ongoing legal controversies), the movie does a decent job with CGI, set designs and life-sized creepy toys modeled after those seen in “Blade Runner” but plays out more like overlong episodes of “Leave it to Beaver” or “The Dick Van Dyke Show” by way of “Mystery Science Theater 3000.”

Lead character Lewis (Owen Vaccaro, the “Daddy’s Home” franchise) is a recently orphaned boy sent to live with his oddball uncle, Jonathan (a relatively toned-down but still grating Jack Black), a warlock with only so-so magical acumen who declares there are no house rules regarding diet, hygiene or bed time and if he wants, Lewis can have cookies for dinner — until he barfs, if he wants.

Immediately Lewis — imagine an even prissier version of the title character from “Young Sheldon” along with Alfalfa from “The Little Rascals” minus the cowlick — rightfully concludes Jonathan isn’t going to be an ideal surrogate guardian. As one would rightfully expect, Lewis is still in mourning over his parents’ deaths (the details of which are never explained or even broached) and in addition to living in a creepy, musty house, he most also endure being the new nerd kid at his school where almost everyone picks on him. As he permanently wears goggles on his forehead (a forced homage to a TV show he likes) and proudly sports bow-ties, Lewis all but invites ostracization.

After not doing a great job hiding his wizardry from Lewis, Jonathan finally goes into detail of how it all began. Before the war (that would be World War I), Jonathan, Isaac Izard (Kyle MacLachlan) and Izard’s wife Selena (UGA grad Renee Elise Goldsberry) were a touring, middle-brow magic act. When the war ended, Isaac returned home a zombie and, as spelled out later, became a convert to the Dark Side — complete with backing from the guy with the horns and fangs reigning amongst the fires down below.

Either because of losing a bet or owing someone a huge favor, Cate Blanchett appears as Mrs. Zimmerman, a witch with far more skills than Jonathan who is professionally burned out and wears more purple than Prince on a world tour. Zimmerman and Jonathan exchange barbed but dullard insults for the duration which wouldn’t make the final cut on a 1960s sitcom or a Catskill rim-shot stand-up act.

Produced in part by Steven Spielberg’s Amblin Entertainment, “THWACIIW” wants desperately to be the next “Poltergeist” or “Gremlins” but in execution more resembles “Howard the Duck” or the baffling “Casper.” It’s neutered and sanitized to such a degree that it will possibly scare the target audience only intermittently, if at all and gets most of its laughs from an oversized live shrub/lion thingy with wings who frequently projectile defecates in the backyard pool, on people or on an apparition chair pretending to be a dog. Yes, you read that last sentence correctly.

For reasons making no sense to anybody but the folks who sign the checks, “THWACIIW” was helmed by Eli Roth, the same guy who played the bat-wielding “Bear Jew” in “Inglorious Basterds” and has directed the torture porn horror “Cabin Fever,” two “Hostel” installments and the recent (and pretty decent) remake of “Death Wish.” From a commercial and industry perspective, it was a smart move for Roth to take this gig as it will likely net more at the box office than all of the rest of his directed films combined but will probably destroy his street credibility with his rabid, hard “R” horror following.

As “THWACIIW” has been produced and is being marketed almost exclusively to families, the question is, does the film cut the mustard? The answer is probably yes. If you’re looking for something to prime you and yours for Halloween, it is barely serviceable only in a most basic and minimal manner.

Will it frighten toddlers? If they can’t understand the bathroom habits of the family cat or might get queasy watching semi-gruesome jack-o-lanterns explode into slime, than yes, they’ll be scared. Is anything presented likely to cause a preteen to recoil in fright or abject horror? Nope, not even close. The average over-stimulated, internet-addicted tween will find the entire enterprise laughably inane and incredibly lame.

Believe it or not, all of the above is the good news. The bad news is that this is just the first of — count ’em, 12 — installments based on the series of novels written by John Bellairs with truly disturbing illustrations from the legendary Edward Gorey, both deceased. If this embarassing turkey makes just a dollar of profit you can bet another dollar there will be at least two more following in its sorry wake.

The House with a Clock in Its Walls" Trailer

'Keeping Up With the Kardashians' finale: Kim's Kanye revelation and more