Sonic (voiced by Ben Schwartz) in “Sonic The Hedgehog.”

Jim Carrey in “Sonic The Hedgehog.”

Neal McDonough and Jim Carrey in "Sonic The Hedgehog." 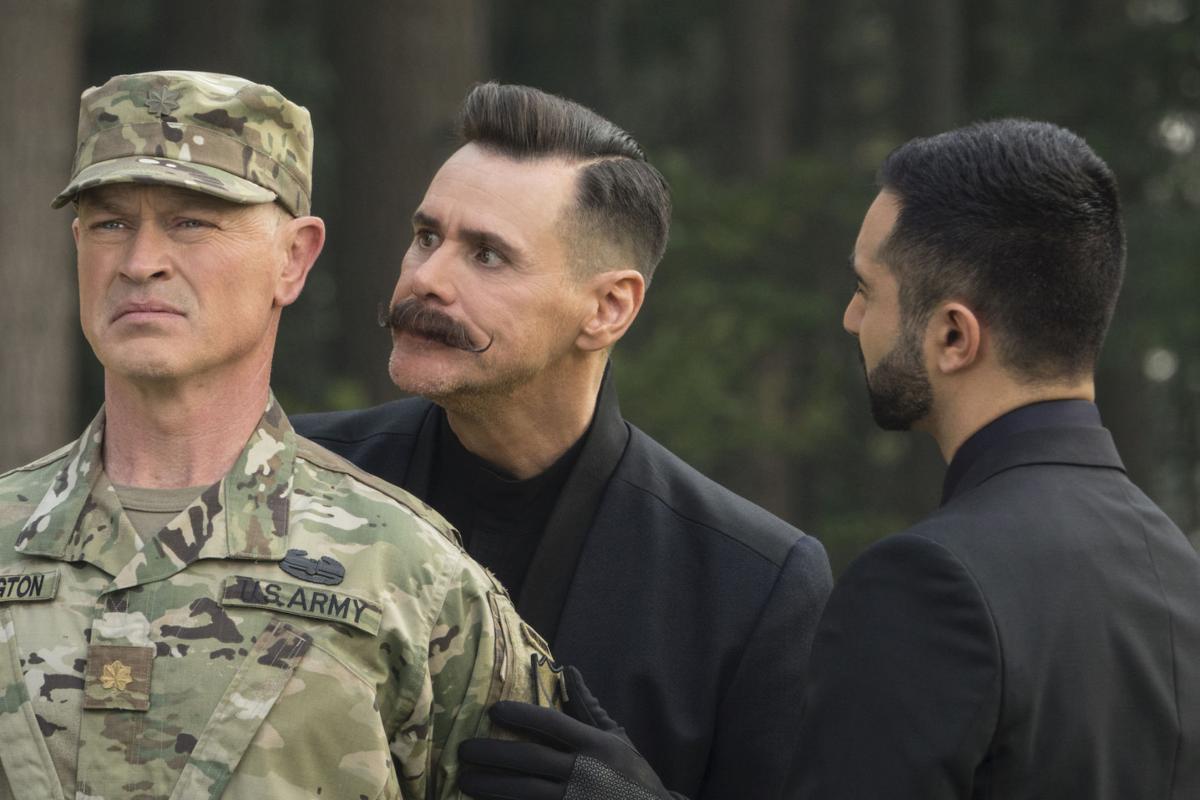 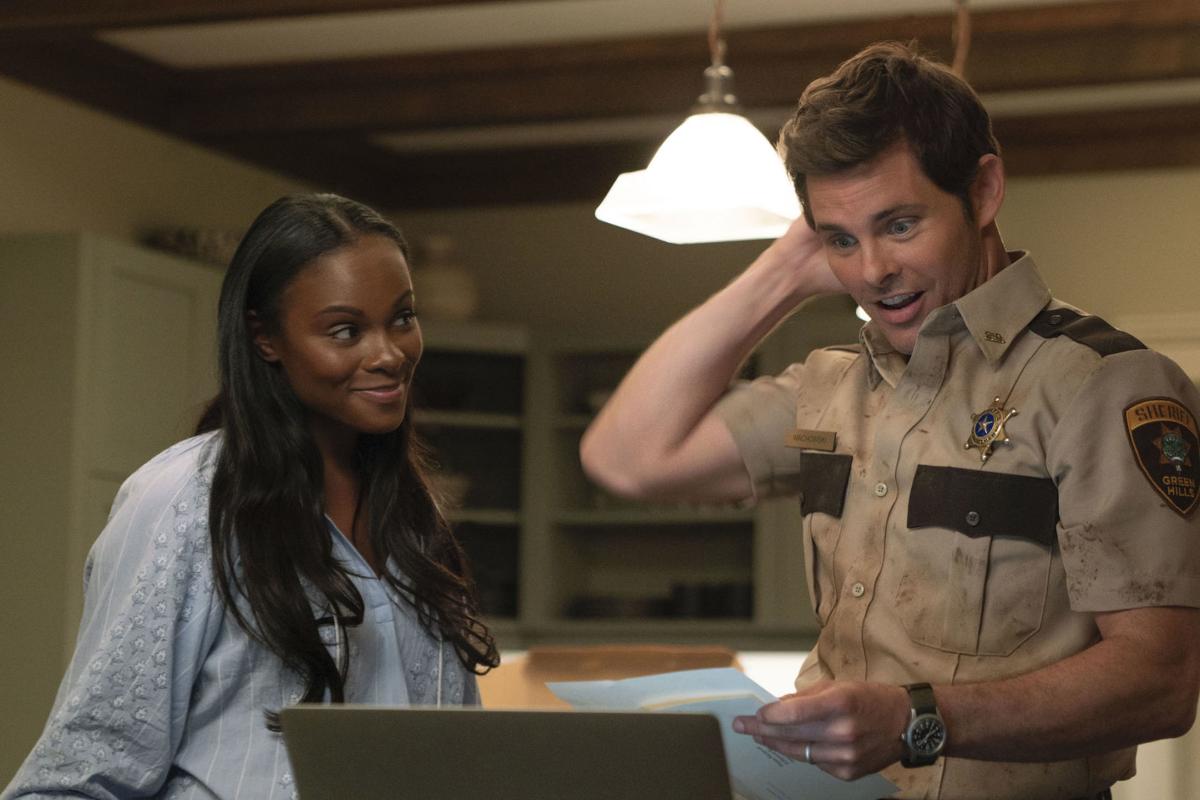 Tika Sumpter and James Marsden in "Sonic The Hedgehog."

Sonic (voiced by Ben Schwartz) in “Sonic The Hedgehog.”

Jim Carrey in “Sonic The Hedgehog.”

Neal McDonough and Jim Carrey in "Sonic The Hedgehog."

Tika Sumpter and James Marsden in "Sonic The Hedgehog."

If you want an example of how bloody desperate Hollywood is for adaptable movie material, look no further than “Sonic the Hedgehog.” It’s based on the ’90s video game of the same name produced by the Japanese company Sega — the makers of those bulky and arcane consoles.

To modern video games what VHS tapes are to 4K Ultra Blu-ray discs, these phone-booth-sized consoles deliver a certain level of nostalgia to many Gen X’ers and even more man-children. Make no mistake, there is certainly a market for “Sonic” — and had the studio and filmmakers made a movie geared toward people over the age of say 25, they might have had a chance to clear a huge profit.

Instead, this movie – like “Doolittle” last month – will likely only be appreciated by the easy-to-please under-10-demographic.

Again, similar to “Doolittle” and the even more recent “The Rhythm Section,” “Sonic” has been rescheduled no less than four times and has been in the can for more than two years. During this time, obsessive fans and original designers of the video game took nitpicking umbrage at the depiction of Sonic, which ushered in a massive animation overhaul, delaying the production for yet another five months and further expanding the black cloud vibe engulfing the project.

Resuscitating the mixed, live-action/animated format which dates back to 1940 and was perfected in “Who Framed Roger Rabbit” in 1988, “Sonic” – at least for the youngsters – is a high-priced fish lure – all flash with absolutely no nutritional value. It looks good, moves at a quick clip and doles out some low-brow bathroom humor.

It also has a motor-mouthed motion-capture lead (voiced by Ben Schwartz) who isn’t nearly as cartoonish as the main villain (Dr. Robotnik) portrayed with typical unbridled, maniac excess by Jim Carrey.

For six years in the late 1990s, Carrey was the top draw in the world, and even his bad movies (“Cable Guy,” “Me, Myself & Irene”) crushed it at the box office. Initially gaining accolades as a brilliant physical comedian, Carrey proved quite adept at drama as well (“Man on the Moon,” “The Truman Show”) and appeared destined for greatness. Then the bottom fell out.

Due to a slew of bad choices in roles, overexposure, and an erratic personal life, Carrey quickly fell out of favor with audiences and filmmakers alike. Over the past 20 years, he’s had just one big hit movie (“Bruce Almighty” in 2003). Second-billed here to James Marsden – the guy known mostly as Cyclops in the “X-Men” franchise – Carrey is back to his old madcap self. While some will certainly appreciate his return to “classic” form, others will view it as a stale, recycled version of the title characters from “Ace Ventura” and “The Mask.”

Within 30 seconds of showing up on screen Carrey hijacks the movie and never relinquishes control. To call it over the top would be an understatement. Longtime Carrey fans will say going broad as he does is fitting considering the material. But for the uninitiated, and those previously unimpressed by Carrey, he’s like nails on a chalkboard. Not even the almost-too-cute Sonic has a chance.

Arriving in Big Sky country through a portal from another world, Sonics’ big claim to fame is his ability to run fast – around 300 mph. Rightfully afraid of being detected, Sonic lays low but this leads to loneliness, then anger, followed by acting out on a baseball field which leads to a blackout of most of the northwest U.S.

Rather than go to Def Con 1, armed forces big wigs reluctantly call on Robotnik. He is a mad scientist and gadget inventor crossed with Sherlock Holmes on acid, and sports a handlebar moustache that suggests Snidely Whiplash’s distant Gestapo cousin.

Not long after convincing local sheriff Tom (Marsden) and his veterinarian wife Maddie (Tika Sumpter) that he’s a “good” alien, the trio heads to San Francisco where Sonic can hopefully find a bag of magic portal golden rings which will allow him to safely leave earth before Robotnik can nab him.

After all of the moaning and complaining voiced by the chronic Sonic diehards, they owe it to the studio to see this movie at least twice each. That, coupled with families in desperate need of something new and halfway watchable, should result in “Sonic” maybe enjoying a decent opening weekend. This should come as great news for Carrey, who has already said he’d be open to doing a sequel.

Open, Jim? Carrey should thank his lucky stars that any major studio would take a chance on him at this point – especially with a possible action/comedy franchise. Most, if not all, of the people with ages in the single digits taking a chance on this movie have never even heard of Carrey. He’s going to need to impress them as well as their parents if he wants the jump-start his career so desperately needs.