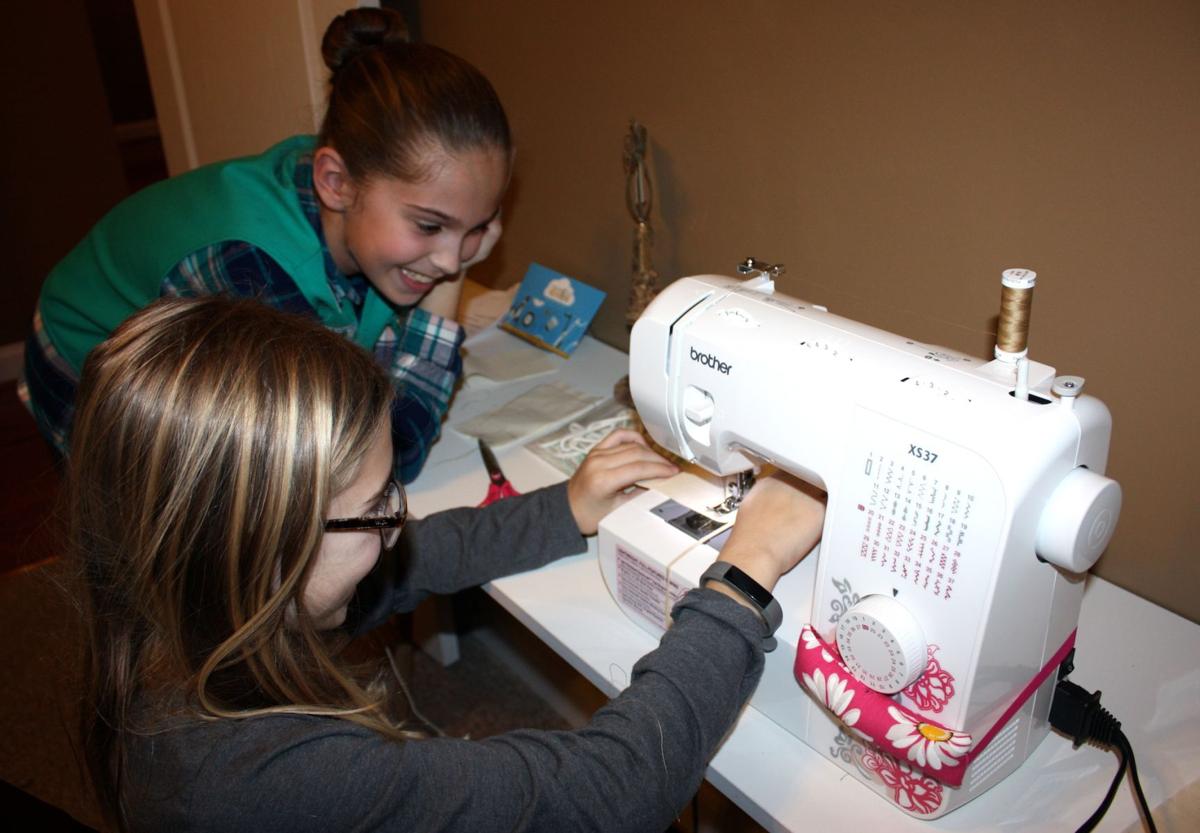 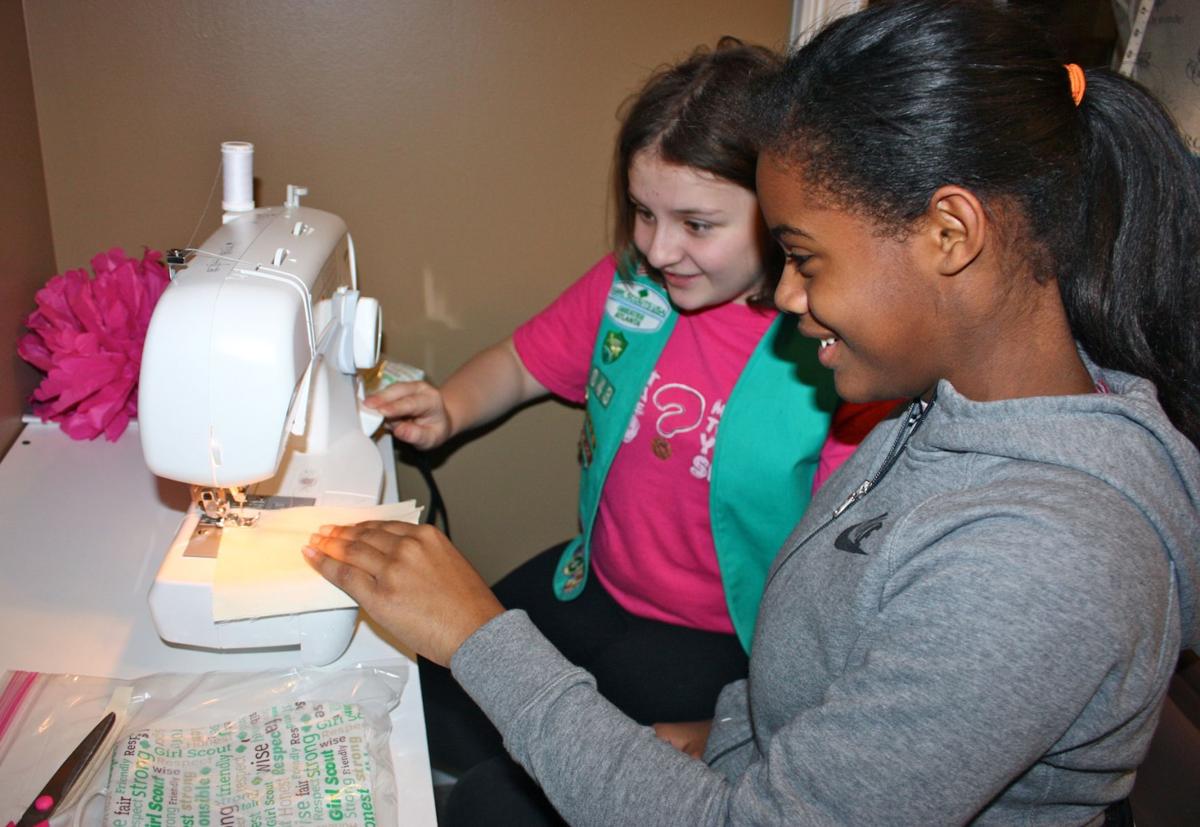 Reese Lapierre, back, and Dani Jenkins, front, smile as they get into the rhythm of the sewing machine at Courtenay Christian’s sewing studio, Threaded from Heaven, in Suwanee on Tuesday. (Staff Photos: Isabel Hughes) 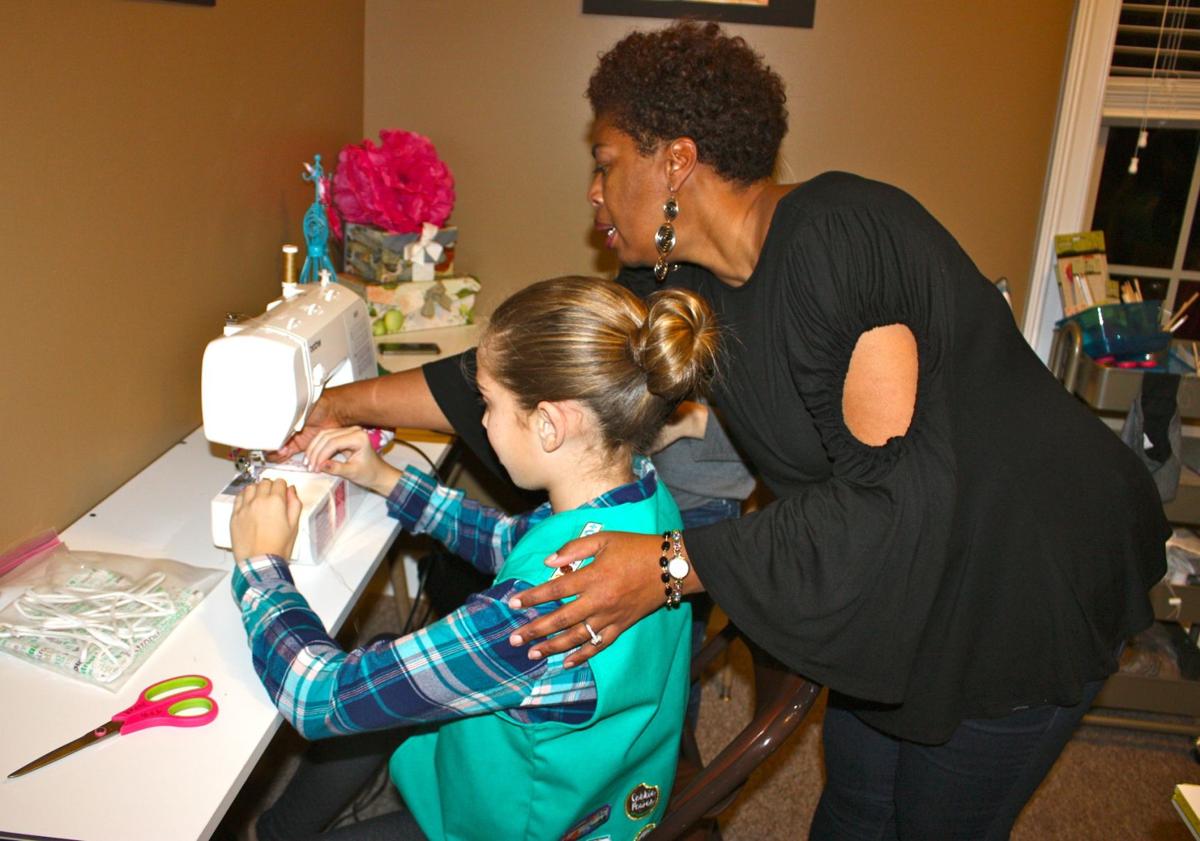 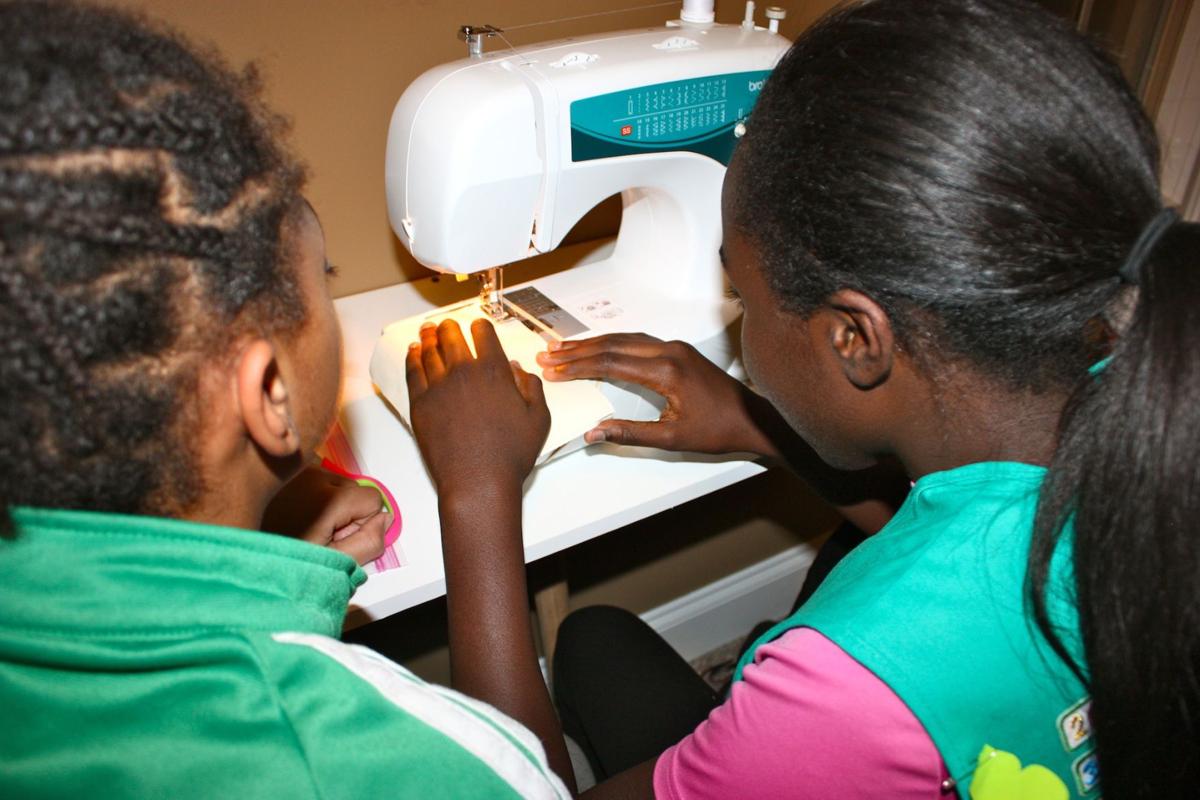 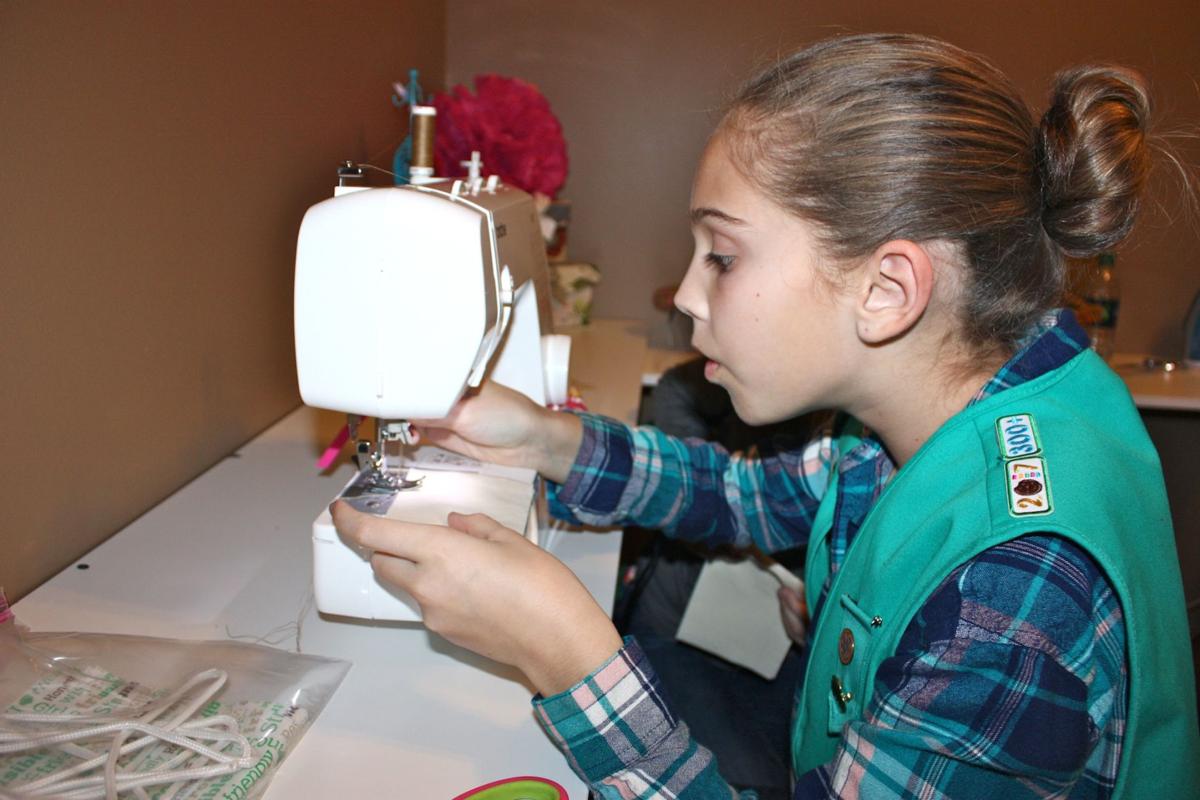 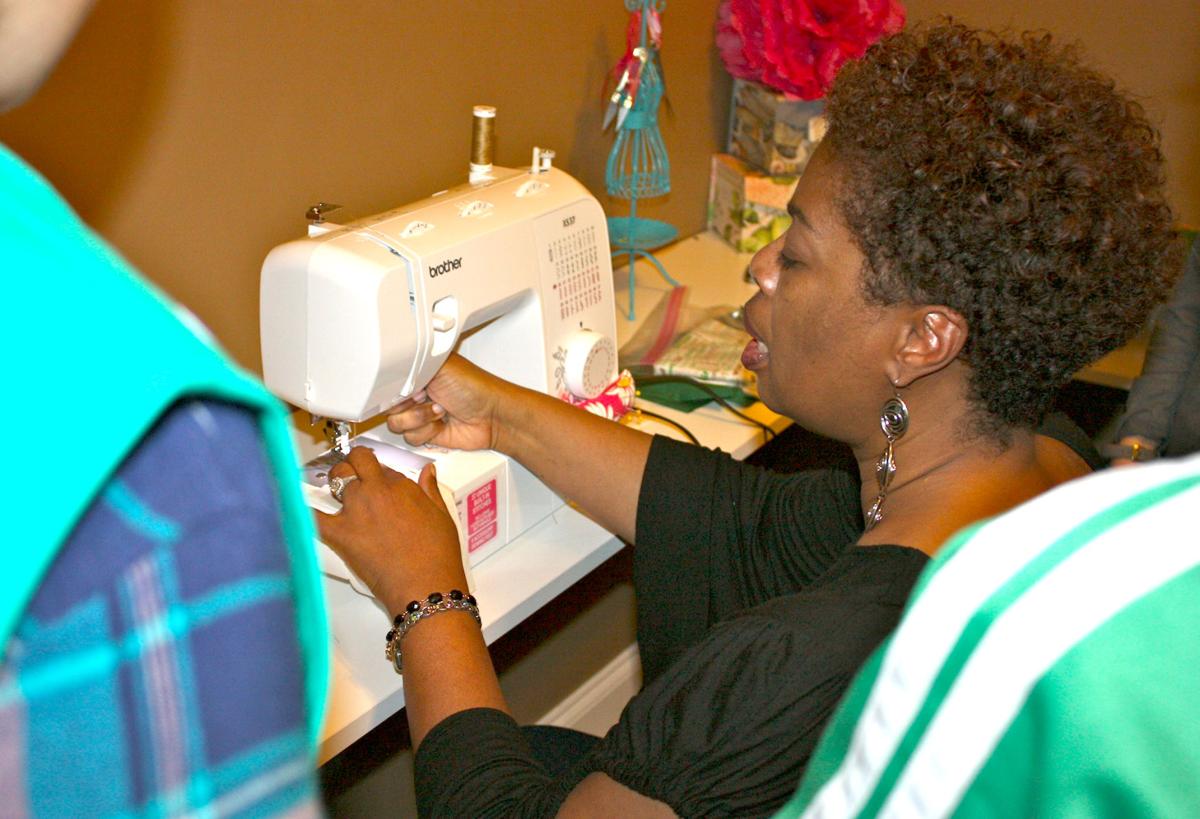 Threaded from Heaven owner Courtenay Christian demonstrates to the Girl Scout troop how to work the machine. 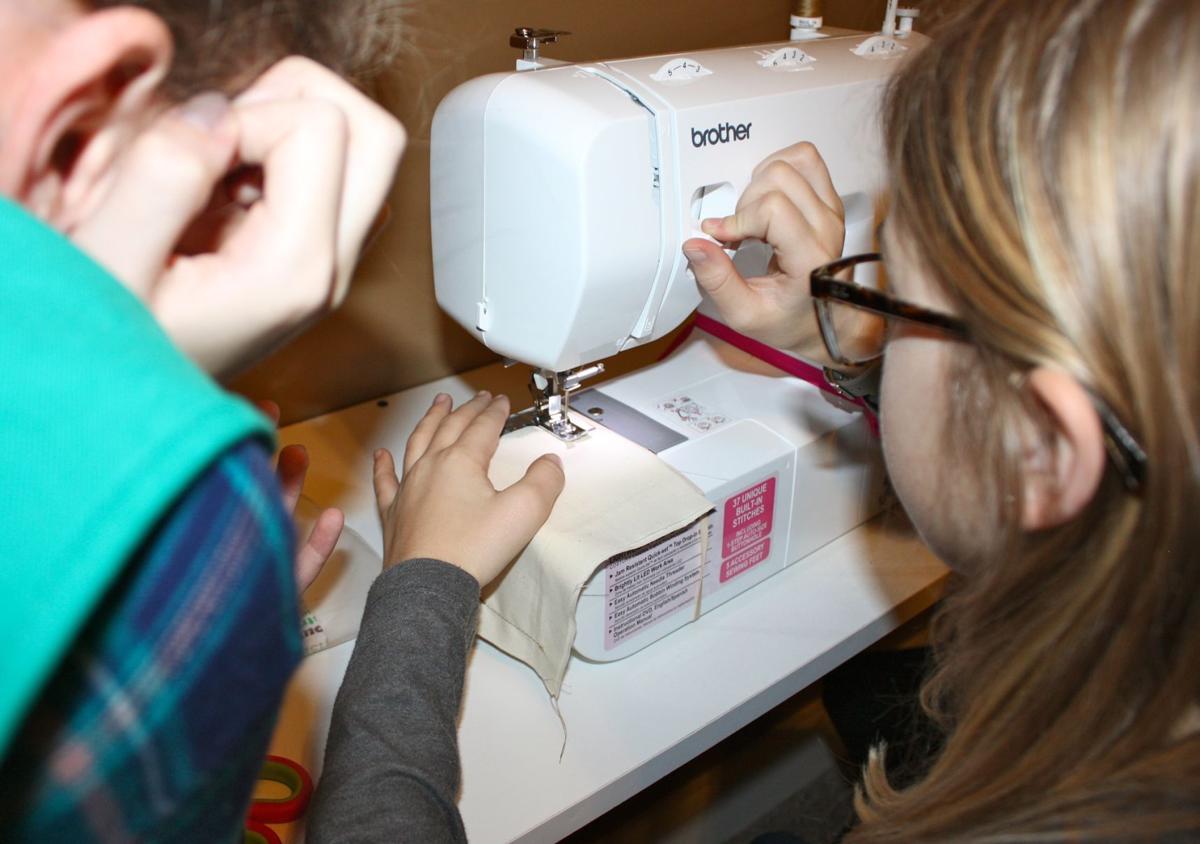 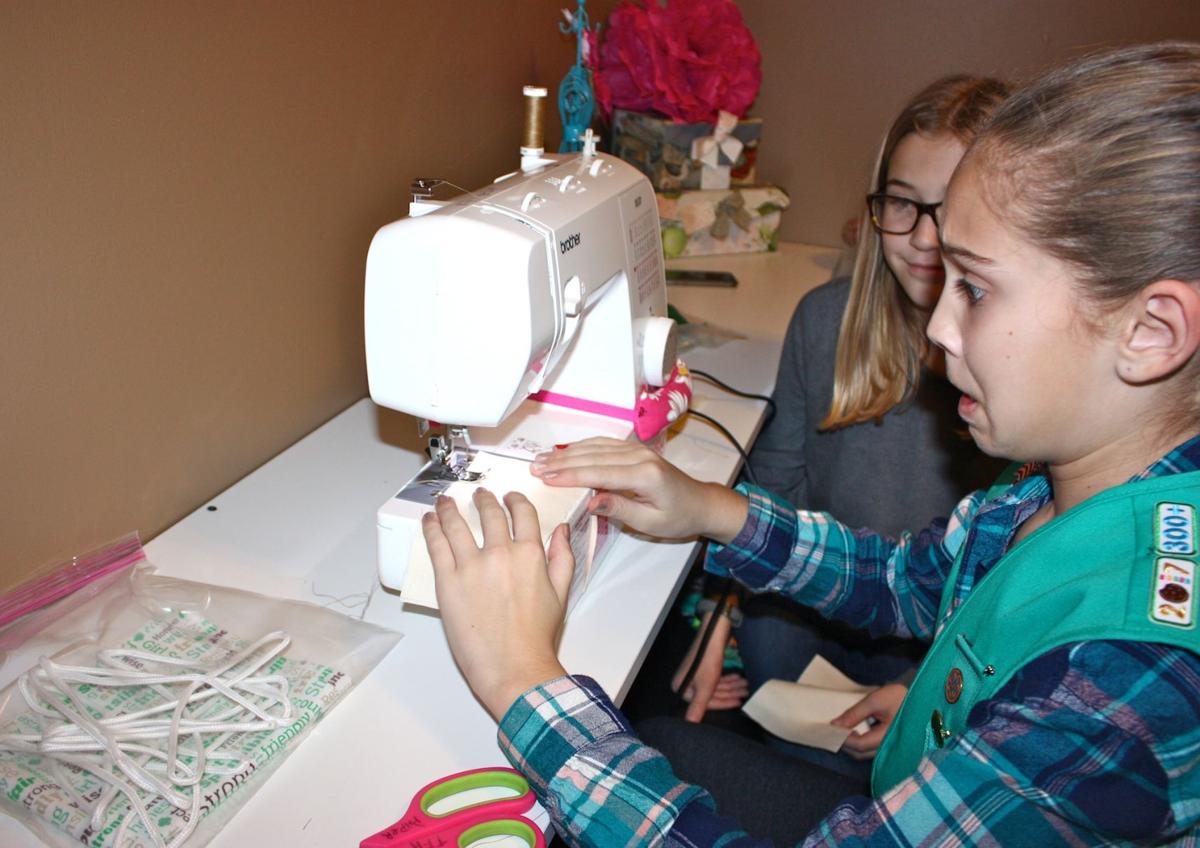 Haley Fulghum was surprised by how quickly the needle stitched her fabric. (Staff photo: Isabel Hughes) 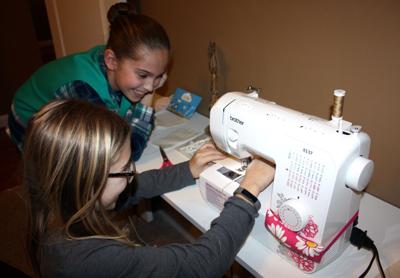 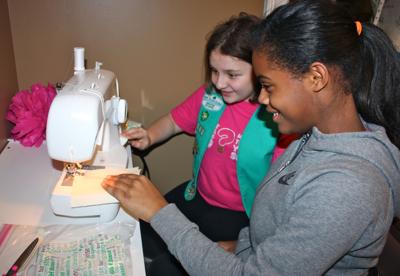 Reese Lapierre, back, and Dani Jenkins, front, smile as they get into the rhythm of the sewing machine at Courtenay Christian’s sewing studio, Threaded from Heaven, in Suwanee on Tuesday. (Staff Photos: Isabel Hughes)

Threaded from Heaven owner Courtenay Christian demonstrates to the Girl Scout troop how to work the machine.

Haley Fulghum was surprised by how quickly the needle stitched her fabric. (Staff photo: Isabel Hughes)

Ten-year-old Haley Fulghum furrowed her brows, eyes wide as she tapped her foot against the sewing machine’s pedal.

Her fabric rapidly advancing, Fulghum let out a surprised squeak, the needle stitching the material faster than she had anticipated.

Taking her foot off the pedal, the machine stopped as quickly as it began — the scene repeating with nearly all of the other five girls in the room at Threaded from Heaven, a small sewing studio in Suwanee.

Its owner, Courtenay Christian, laughed encouragingly, a twinkle in her eye.

“That’s all right — just go slower,” she said to the Girl Scout Troop, which had scheduled a two-hour sewing lesson.

Eyeing the room, warm from the hum of the machines coupled with preteen chatter, Christian smiled, her vision having become reality.

“Sewing gives kids so much more than just what they sewed,” she said. “It makes you work with your cognitive skills, hand-eye coordination, concentration and things of that nature. But you also see this sense of accomplishment in the kids when they’ve sewed something and the pressure is off from the school environment.”

Christian, who recently opened Threaded from Heaven, has been teaching for more than 10 years and sewing for nearly her whole life.

Over the last decade, she has held Saturday classes at Buford’s Jo-Ann Fabric and Crafts store and, most recently, Hobby Lobby, which she said gave her the opportunity to meet many sewers — beginners and advanced hobbyists alike.

In September, however, after realizing a demand for the classes and wanting to do more with preteens and teens, she opened the studio.

“I would go to Jo-Ann Fabric to get material for my sewing projects,” she said, “and I’d be helping people while I waited in line. The sewing director finally said to me, ‘You need to keep sewing here,’ and I spent about three years teaching there and then I’ve been at Hobby Lobby ever since. While I liked that a lot and had a great schedule teaching there, I just noticed a need for more. The opportunity came up for me to branch out and I am now able to have my own sewing studio.”

While most of Christian’s after-school programs are geared for children ages eight and up, she also offers private lessons, beginner sewing lessons, adult nights and more.

But she said it’s the children she most enjoys working with.

“Not only do I enjoy sewing and teaching, but I also enjoy the conversations I have with these kids,” she said. “It’s nice to see the kids and see how their thought patterns work and I try to give a little support where they need it. Some of them experience bullying in school, and while they have parents who can (comfort them), I feel like I can provide support in a different (setting).”

“It has many learning advantages,” she said. “Children’s small and large muscle coordination are exercised, their fine motor skills are used through cutting, pinning, measuring and ironing, and they have an opportunity to take pride in their handiwork while encouraging the creative process. It also reinforces what they learn in school.”

That reinforcement ranges from math to art, Christian said.

“Say they’re learning how to do measurements — inches to centimeters or (conversions) like that — in math,” she said. “In school they may think, what am I going to use them for? But then you get into sewing and you find that ‘hey, this does have value’ and they see it in a different light.”

It’s not just children who benefit from sewing, though.

“Sewing helps with self-confidence; not just in the kids, but in adults that come in too,” Christian said. “Everybody, at some point, needs that little boost now and then. The sense of accomplishment they have at the end when they’ve actually finished it and it looks nice is what I love.”

Christian, who picked up sewing from her mother, a seamstress, said she first got serious about the art after working in a corporate job for a number of years.

“I moved to Georgia 24 years ago and my job wasn’t the most satisfying,” she said, “I wanted to do something more than just working 9-5, so I started sewing dolls, stuffed animals, and started selling them. That’s what led me to (Jo-Ann Fabrics.)”

There, she found her love of teaching.

“I get excited when the light bulbs go off and people realize they can do it,” Christian said. “I get people who come in and weren’t successful previously and say, ‘I want to give it one more chance,’ but I also get people who have never done it before and may think it’s hard but they want to try. Just watching them when they realize it’s not difficult and they can do it is the most enjoyable part. Helping people — the teaching part of it — that’s the goal.”

As the Girl Scouts buzzed with excitement Tuesday, that goal was realized, the girls proudly showing off their stitches.

Despite the occasional misstep and thread jam, the beginners — none of whom had previously used a sewing machine — left with something they previously were lacking: a newfound love of sewing.

Christian, who recently opened a small sewing studio, Threaded from Heaven, in Suwanee, has been teaching for more than 10 years and sewing fo…