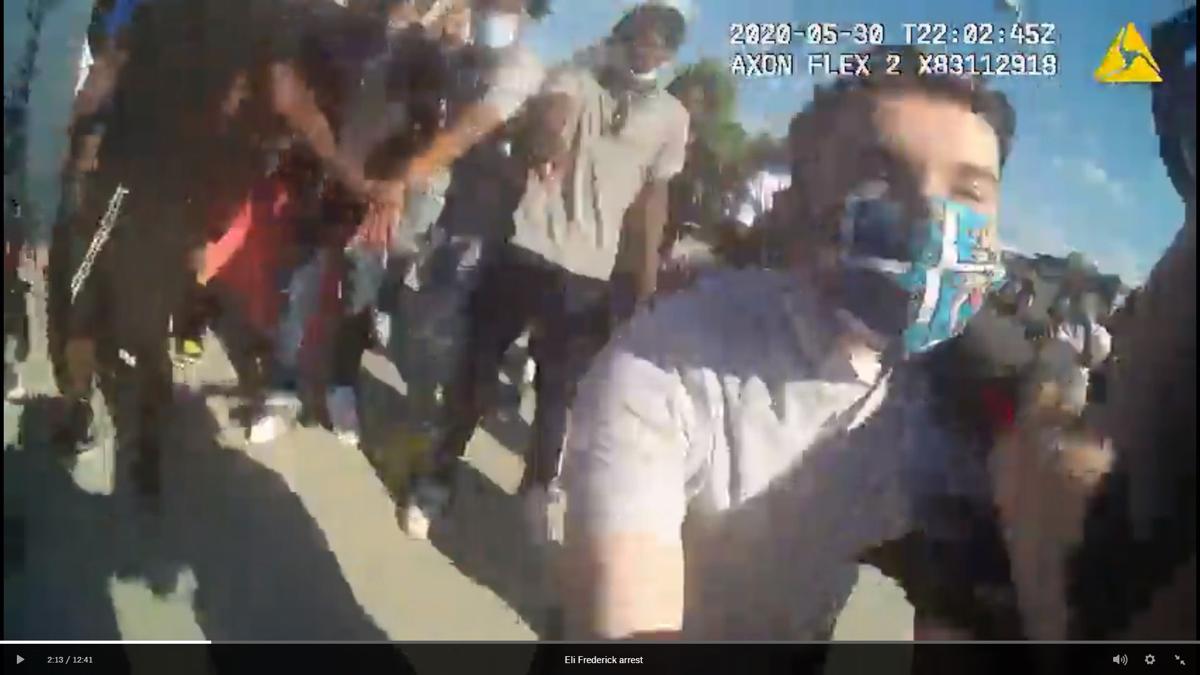 This still from Gwinnett police body camera footage shows an officer struggling with Eli Frederick during a protest at Sugarloaf Mills on Saturday. The officer was seen punching Frederick in videos that surfaced on Twitter over the weekend. 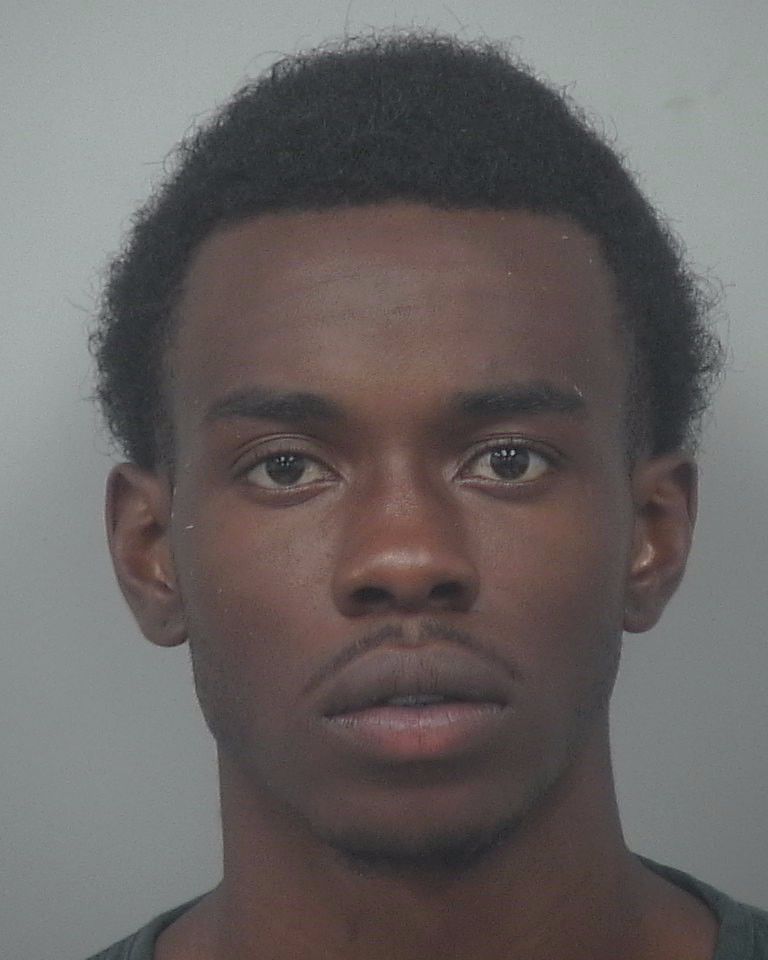 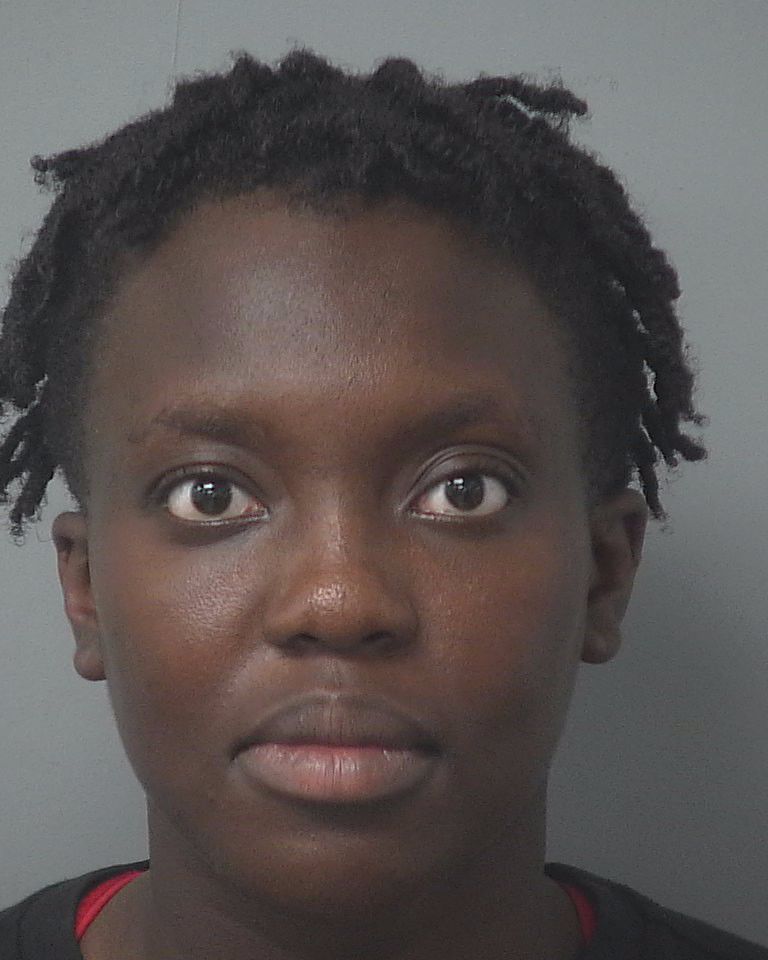 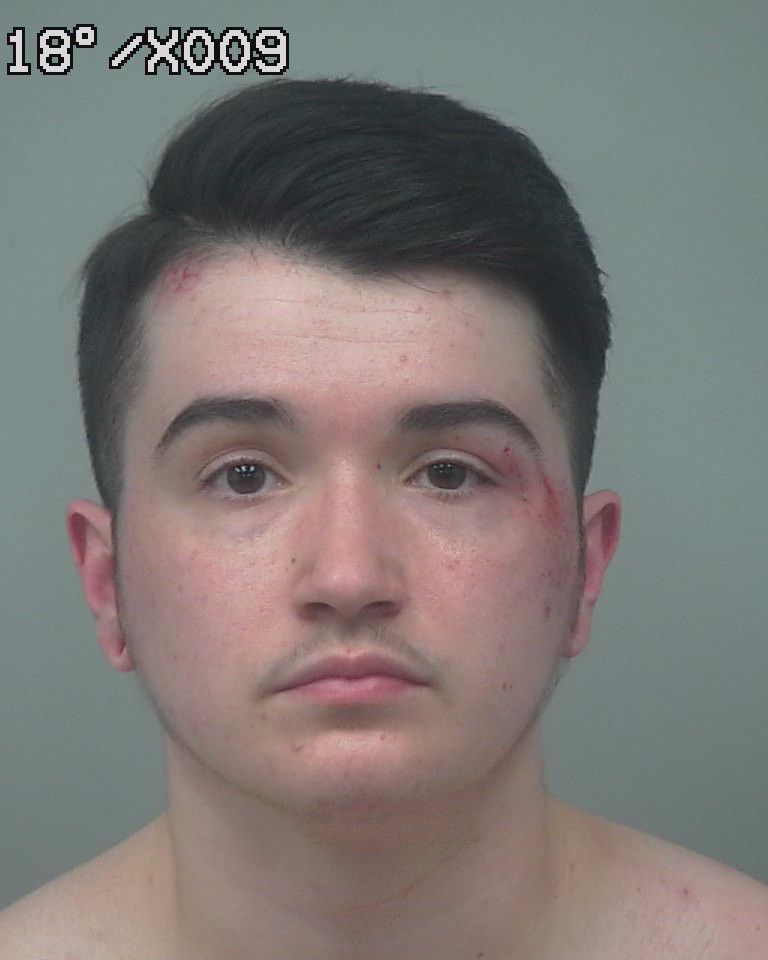 Details and police body camera footage are emerging from four arrests that occurred during a protest at Sugarloaf Mills on Saturday, including one who was punched in the face by an officer and another who officers used a TASER on.

Each of the four was charged with disorderly conduct — refusal to disperse, but Frederick was also charged with willful obstruction of law enforcement officers.

Gwinnett police said a crowd had gathered around officers and began throwing objects at them during the protest. Officers attempted to arrest Joseph for criminal trespass at that time, but he allegedly ran off. Police did not specify what Joseph did at the protest that prompted officers to want to arrest him.

Body camera video showed officers telling Joseph and other protesters to get on a sidewalk. Joseph can be heard repeatedly asking why officers were addressing the group he was in, and not some nearby people who were white.

“What about those white people,” Joseph can be heard saying.

“Hey, if you don’t get off the road, you’re going to jail for criminal trespassing,” an officer can be heard saying to Joseph. “Three, two, one. You’re under arrest. Let’s go. Come on.”

Frederick then allegedly jumped between an officer and a female that the officer was attempting to arrest. Police accused Frederick of pushing the officer.

“Body camera video being released shows Frederick being told that he was under arrest and refusing to comply with that lawful order,” police said in a statement released Monday. “While the officer was attempting to place Frederick in handcuffs, Frederick kicked the groin area of the officer. That officer delivered two straight strikes to Frederick in an attempt to gain control and compliance.

“After he was struck, Frederick complied with officers and was placed in handcuffs with no further resistance. This use of force, as are all applications of force, has been reviewed through the chain of command and has been found lawful and within policy.”

Master Police Officer D.J. Bennett, who arrested Frederick, said much the same in his arrest warrant affidavit. The affidavit does not mention that the officer struck Frederick, however.

“The accused blocked me from makeing (sic) the arrest of another subject,” Bennett wrote. “The accused physically interfered with the arrest. The subject was pulled out of the crowd to be arrested, at which point he attempted to get away. The subject refused to comply with officers and put his hands behind his back to be handcuffed. The accused was forced to the ground where he attempted to kick me and continue to get away. Accused did not offer and did not do violence to the person of said officer.”

Joseph then returned as handcuffs were being put on Frederick.

“Joseph was told that he was under arrest again,” police said. “As Joseph was non-compliant, he turned to run away for the second time, he was struck with a TASER. The TASER strike caused Joseph to fall to the ground, and he was placed in handcuffs without further incident.”

Nwankwo and Milton were arrested without incident, police said.

Joseph and Frederick bonded out of jail on Saturday while Nwankwo and Milton bonded out Sunday.

There were no previous arrests listed in Gwinnett’s jail records for Frederick or Nwankwo.

“The police department is in full support of anyone who wishes to exercise their right to protest in a peaceful and lawful manner,” police said. “At the same time, the department has a responsibility to the residents of Gwinnett County to protect life and property. We will continue to remain transparent in our application of police services and are committed to keeping Gwinnett County safe.”

What's funny is the social media posts trying organize this said nothing about protesting. It was all about going to the mall and running wild and stealing. These kids had no intention of being peaceful. A great show of force and restraint by the cops that night. Having a good police department makes a big difference.

Good work by Gwinnett county law enforcement. Protesters protest peacefully. Is that such a difficult concept? Must you deliberately go out of your way to act the fool? And if you do then you face the consequences.

fricking punks, what has what their doing got ot do with anything...IDIOTS, ARREST ALL OF THEM

That they are criminals ...duh!

I’d really like to know, genuinely, what is the point of reporting their previous arrests?

Same point as putting the police officers previous work record out. It shows a pattern of conduct.

Enter by July 26th for a chance to win a Four-Pack of tickets to Take a Walk on the Wild Side at Fernbank. Contest Rules: Must be 18 years of age or older to enter. • Void where prohibited and restricted by law. • One entry per household per day. • Employees of the Southern Community Newspap…