An unveiling ceremony showcasing framed photos and citations honoring the Georgia Military Veterans Hall of Fame Class of 2019 will be held in the Georgia State Capitol Rotunda at 2 p.m. on Jan. 29. 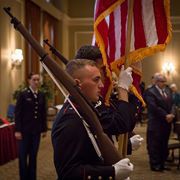 This year's honorees set to be inducted into the Georgia Military Hall of Fame include Atlanta resident with ties to Albany, retired Admiral Wendi Lea Bryan Carpenter, one of the Navy’s first female flight school graduates, and Irwinville veteran U.S. Army 1st. Lt. Clyde Vernon Moore, who will be recognized posthumously.

An unveiling ceremony showcasing framed photos and citations honoring the Georgia Military Veterans Hall of Fame Class of 2019 will be held in the Georgia State Capitol Rotunda at 2 p.m. on Jan. 29.

This year's honorees set to be inducted into the Georgia Military Hall of Fame include Atlanta resident with ties to Albany, retired Admiral Wendi Lea Bryan Carpenter, one of the Navy’s first female flight school graduates, and Irwinville veteran U.S. Army 1st. Lt. Clyde Vernon Moore, who will be recognized posthumously.

ATLANTA — An unveiling ceremony showcasing framed photos and citations honoring the Georgia Military Veterans Hall of Fame Class of 2019 will be held in the Georgia State Capitol Rotunda at 2 p.m. on Jan. 29.

“The 15 honorees will bring the total to 115 military Georgians to be inducted into the Hall of Fame since its inception in 2013,” Col. Paul Longgrear (USA-Ret.), the GMVHOF founder and CEO, said in a news release.

According to GMVHOF Director and Chairman of the Board Col. Rick White (USA-Ret), the public is invited and encouraged to attend the ceremony, which will be hosted by Georgia Sen. Ed Harbison, a U.S. Marine Corps Viet Nam veteran and GFMVHOF Inductee No. 27.

To qualify for the elite standards of the Hall of Fame, nominees are judged in one of three categories: Valor, for having received a valorous award for bravery exhibited during combat; Achievement, for significant contribution to the improvement of the military; and Service, for those who have made significant impact on community, state and/or national causes after having honorably served on active duty.

The Georgia military veterans who met the highest standards in these categories and will be honored in the Capitol ceremony Jan. 29 are:

♦ Retired U. S. Army 28-year veteran and U.S. Military Academy graduate Col. Gregory C. Camp of Columbus, who was awarded the Bronze Star with valor for heroism during a Viet Nam tour with the 1st Cavalry Division. He has since served in a major leadership role for the creation of the National Infantry Museum and Soldier Center at Ft. Benning.

♦ Atlanta resident with ties to Albany, retired Admiral Wendi Lea Bryan Carpenter, one of the Navy’s first female flight school graduates, who was cited for her many safety records as a pioneering female naval aviator. She would go on to become the Navy’s first female pilot to achieve flag rank and continued to go on creating “firsts” by achieving appointments to major government and educational positions after retirement.

♦ John’s Creek Viet Nam veteran and former Staff Sgt. Richard F. Dundon, who was awarded the third highest military combat decoration, the Silver Star, as well as the Bronze Star with valor for his feats of heroism during repeat battles with the 1st Cavalry Division (Air Mobile).

♦ Former U. S. Marine Corps Staff Sgt. and Viet Nam veteran Bertley Vansant Englade Jr. of Marietta, who was awarded a Silver Star and Purple Heart for valiant acts of heroism while serving a 13-month combat tour with the Third Marine Division.

♦ Toccoa 30-year U.S. Army veteran and North Georgia College graduate retired Maj. Gen James Adrian Guest, who served two tours in Viet Nam for which he was awarded the Silver Star and Bronze Star with valor. He subsequently held several Special Forces command positions to include Operation Just Cause in Panama as well as Mideast operations in Desert Storm and Desert Shield.

♦ Cleveland U.S. Army Sgt. Jason R. Harkins, who was awarded the Silver Star and Purple Heart for a gallant display of heroism during Operation Iraqi Freedom in 2007. He and members of his unit were later killed during a roadside bomb explosion.

♦ During a yearlong tour in Viet Nam, Griffin resident and West Georgia College graduate James Charles King was credited with more than 50 helicopter assaults and was awarded the Silver Star, 2 Bronze Stars and the Purple Heart earned during combat with the 1st

♦ Irwinville native U.S. Army 1st. Lt. Clyde Vernon Moore, who was posthumously awarded 2 Silver Stars, the Bronze Star and Purple Heart for continuing to engage outnumbering enemy forces at the cost of his own life while serving as a platoon leader with the 101st Airborne Division in Viet Nam.

♦ Former Korean War U. S. Marine Corps Reserve rifleman Charles Henry Monroe Jr., who exhibited indominable fighting spirit while repulsing a hostile attack despite being severely wounded after being blown from his foxhole, for which he was awarded the Navy Cross.

♦ A prominent Griffin citizen, retired veterinarian Dr. Philip B. Smith, who, while serving as a helicopter pilot in Viet Nam, was awarded the Distinguished Flying Cross for the rescue of allied soldiers pinned down by enemy fire. In a subsequent battle, he was awarded the Silver Star and Purple Heart for repeatedly returning to a landing zone inferno to rescue critically wounded soldiers, despite incurring second-degree burns to himself.

♦ Fayetteville resident and North Georgia College graduate retired U.S. Army Maj. Gen. Jack C. Wheeler, who during his 33 years of distinguished service carried out assignments in Korea, Viet Nam and the Pentagon. He was later to become a key figure in the successful transition from the draft to the all-volunteer Army, and was instrumental in maintaining increased quotas during the downsizing era despite implementation of higher recruitment standards.

Former U.S. Army Medical Corps Specialist and current Roswell resident Roger W. Wise Jr., who, since his honorable discharge in 1967, has selflessly dedicated his subsequent years to supporting myriad civilian, military and charitable causes. On many occasions, he has been recognized by high-ranking government officials for streamlining Georgia’s Veteran’s hospital system and for his dedicated support of other veterans’, children’s and senior enterprises.

A 104-year-old US Marine Corps veteran who served in World War II is asking people to send him cards for Valentine's Day.

Make your picks for the questions asked about the Big Game, and the player with the most correct answers wins the national prize - a Weber Gas Grill! Local participants have a chance to win some great prizes from our sponsors. Deadline is 6pm ET Sunday, February 2nd. No purchase necessary. V…

This grocery store wanted to compete with Whole Foods. Now it's going bankrupt

There's been a run of surgical masks in the US because of the coronavirus scare. You don't need them, physicians say